Yay, yay, yay … NBN could finally be on its way to Lauderdale (I currently get an average speed of around 300 kbps which means it usually takes about 3 to 4 seconds to download a megabyte of data and about 10-15 seconds to upload a Mb of data.  This is very slow, and to put it in human terms it means it takes me one to two minutes to upload a decent photo and we can only watch Netflix if everyone in the house agrees and we all stop using our other electronic devices.  Sigh.

Anyway, after my morning excitement, I completely forgot about the whole NBN thing until I was riding home, hurtling down the hill from Rokeby, on a fairly gusty day, at my usual 45-50km/hr (about 10km/hr below the speed limit) and then just as a car was overtaking me with about 50cm to spare, I hit (what to me looked like just another power pole shadow across the road) but was in fact a 2cm high piece of ashphalt left from the mornings road excavation and cable laying.

With no signage or warning – I hit the ridge (shock) and found myself airborne with a car mere centimetres away from me (shock and shit). 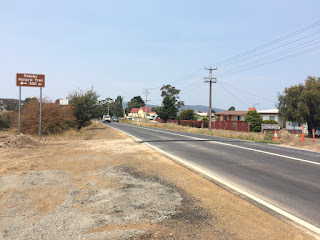 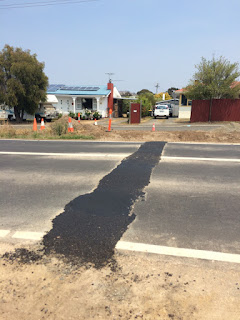 As it turned out, I landed fine and the car went on its way oblivious to the brown stains now adorning the inside of my nicks … but that was as much down to good luck as anything (not the brown stains obviously – they were not good luck).

Sure, I’m responsible for my own safety on the road, but in this case the road conditions had been changed by roadworks and it was done on a route which is marked as a major cycling route.

I think a ‘changed road conditions’ sign should have been put up, especially as I had only registered a complaint about the exact same section of road just a few months ago when they ripped up the surface on the hill and failed to put up a cyclist warning sign.

Still, I’m alive to ride another day and that’s a good thing … even more luckily I’d just ordered myself a whole new set of nicks.