So the other week, I was skipping through random shows on Netflix trying to find some mindless Friday night viewing, when I came across a movie that sort of sung out to me … fat, sick and nearly dead.

This is basically a docu-movie  about a guy (Joe Cross) who goes on a 60 day juice diet as he travels across the USA and lectures his world view at a lot of people while losing lots of weight (33kgs from memory).  It’s actually a pretty reasonable watch (especially as it’s free on Netflix) and it got me inspired to try and do something about my weight.

So I checked out their community website and decided … why not give it a try?

With this decision made, the next step was buying a juicer.

I checked out the recommendations on the rebootwithjoe website, crossed checked it with choice’s recommendation, and a lunch time shopping session and a hundred and something dollars later, I was the proud owner of a Breville juicer …

I decided to start my juice diet on Saturday (as Kim would be away for the weekend giving me 48 hours to be grumpy with just me and the dogs present).

Friday night and Saturday morning involved several trips to local fruit and vegie stores to buy the several tonnes of fresh lemons, celery, ginger, apples, carrots and many thousands of other expensive ingredients which I would need to use, and then it was time to begin …

Saturday went pretty well, a yummy baked fruit berry and apple thing for breakfast, and then for lunch, little Zara (who had joined me unexpectedly as she was feeling sick and Kim needed to run Markus to seventeen birthday parties, 23 games of soccer and god knows what else) and I churned through a huge amount of apples, carrots and ginger to make our first juice .. 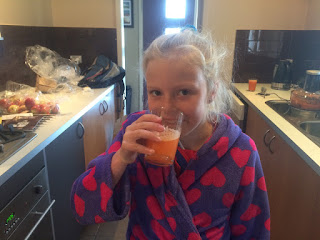 And it was good (yes, she did actually drink it and more).

I didn’t enjoy all the cleaning up afterwards, and I have to admit throwing away all that solid matter seemed a bit wrong to me, but hey this was what I had signed up for, so this is what I’d do.

Little Zara took off with Kim later in the day to spend the night in Carlton, leaving me on my own on Saturday night with all the joys of a rumbling stomach, a building headache, but a determination to see this through … I was after all detoxing and that could only be for the better.

Then, by complete coincidence, I was watching a bit of catch up television to distract myself from my growing headache, when, part way through an episode of the checkout, a section came on … on detox diets.

… and (at about 3:40seconds) somebody who was actually a scientist and who understood nutrition dropped a bombshell … all these feelings I had of nausea, headaches etc. weren’t my body ‘detoxing and cleansing’ itself (apparently my liver does this), it was my body screaming out for energy and going into starvation mode.

All this sh*t I was feeling wasn’t actually making me one jot healthier – it was my body screaming out that this wasn’t what it needed.

Yea – reminder note to myself: that’s why science should be a peer reviewed thing, and not something you learn about on Netflix and a marketers website.

However, denial and commitment are strong forces, and not really wanting to believe how easily I’d been suckered, I went up to bed and spent the night checking out a number of reputable medical websites, and sure enough they all confirmed the same thing … while a detox diet can be used to rapidly lose weight, it’s not a very good way to lose weight in the long term, and none of the claimed ‘detox’ benefits are actually proven.

I still stuck to my detox diet for another 16 hours as I considered the pros and cons of using the juicing approach to get a jump start on some weight loss but then decided that a healthy weight loss approach just makes more long term sense, and so for lunch on Sunday I had a lovely chicken salad wrap (after yet another visit to the shops to buy more food).

So that was my 36 hour juice diet.

I wouldn’t have got much change from $250 (which no doubt is why there’s so many businesses out there telling me why detox and juice diets are so good) but it was still fun to try.

I think the interesting thing for me though (two weeks later) is the results.

I have continued on what I would decided to call a chaotic regime of health and exercise (stay tuned for the book and video coming to you soon through this blog) for the same period I planned on doing my juice diet.

I somewhat arbitrarily decided to go completely caffeine and alcohol and soft drink free for seven days (and that was hell), but otherwise have just been eating what I consider to be health food and food portions and I’ve been doing my cycle commuting.

I think it’s also worth mentioning that I started this diet on the back of having already lost 2.9kgs the month before (so there was none of that first few days accelerated weight loss benefits you get from suddenly reducing food intake), and the result … 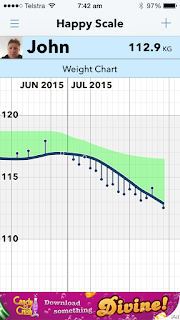 But I didn’t stick to it, I never really went hungry, I had energy to exercise and I just changed little things (I drank water instead of wine, I had sushi or soup for lunch, and I didn’t have dessert after dinner).

However, I also had a glass of wine on the weekend, caught up with Steph for a coffee and omelette one day and I even ate a slice of decadent chocolate cake at Mike’s farewell morning tea … 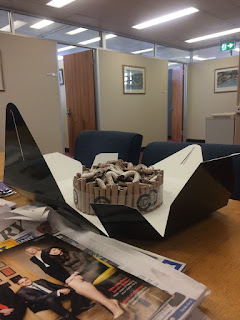 And I still got a pretty good result.

Now I was going to put a lecture piece in here about the difference between correlation and causation and why Netflix, facebook and A Current Affair are NOT good places to go for health advice, but I’ve just been told by a friend that there’s new scientific evidence that the 5:2 diet really works (it was in last weekends paper) … so I think I’ll go back and give that a try next week …

I’ll just have to go out and buy the book again.