We saw some amazing industry in Japan.  I recall sitting having our lunch on the cycling road and looking across the channel to see several large ships being constructed (or maybe repaired) on the horizon.

But, with my productivity lens on, I was also surprised at what looked to be a hugely inefficient under-utilisation of human capital.
The photo below shows just one example (taken by accident) … We saw this while cycling in Kyoto … One man cutting the grass on the side of the path, with one other holding up a mesh screen to stop grass coming on the path.  A bit further along, there was a similar situation, but there was a third person directing traffic around the operation, and another just standing there. 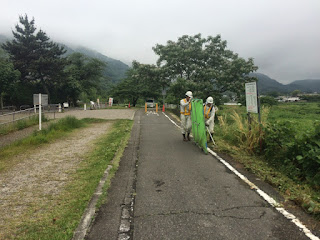 That’s four people to cut some grass with a whipper-snipper.

When we arrived in Tokyo on the first day one of the escalators in the train station was broken and there were a dozen men there in hardhats and high-vis vests all standing on the escalator … but only one actually doing anything (you almost felt like you were in Australia).
When we were leaving today, we drove past a section of closed off roads into the airport.  There were three tool booths leading into an area of construction, and they were all closed, with toll gates down and thick vehicle blockers in front of them… and standing in front of each blocker was a man in a uniform making sure you didn’t drive into what was essentially a solid metal barrier.

Just before that, the transfer bus we were on to get us from Terminal 2 to Terminal 3 had to go through a gate in a fence.  There was no automatic gate opener – nope, another guard paid to stand there all day to let the transfer shuttle through.

In the Department stores in Tokyo, there were so many floor staff it was like stepping back in time to the era of that British comedy “Are you being served, Sir?“

Now, none of these are bad things, in fact in some ways they may reflect a society that cares and tries to provide employment, but they didn’t gel with the image I had of Japan being an economic giant driven by high levels of productivity.

In my current position (I seem to get a new job title every six months) I’ve been spending a lot of time thinking about productivity and growth, and I’d be fascinated to know how these costs are justified, what is the thinking behind it … Is it just the way things have always been? is it a result of having so many people in such a small area? or is it one of the reason’s their economy is in decline…

These are the reasons I travel, not so much to take the photo of the cool bamboo grove or stand at ground zero in Hiroshima, but rather to see the world first hand for myself.

To see what lies behind, and ask the question – why?

To understand that our paradigm, our world view, is just that – a view into the world, and one that we should always test and question.

Travelling is a time to wear different eyes, and see different things, it is a time to grow or change my world view, and whether I love it, like it or hate it, I’ll always learn something from my travels.

Which is why I’m already thinking … where next?