Have I ever mentioned how easily I get bored of trails? 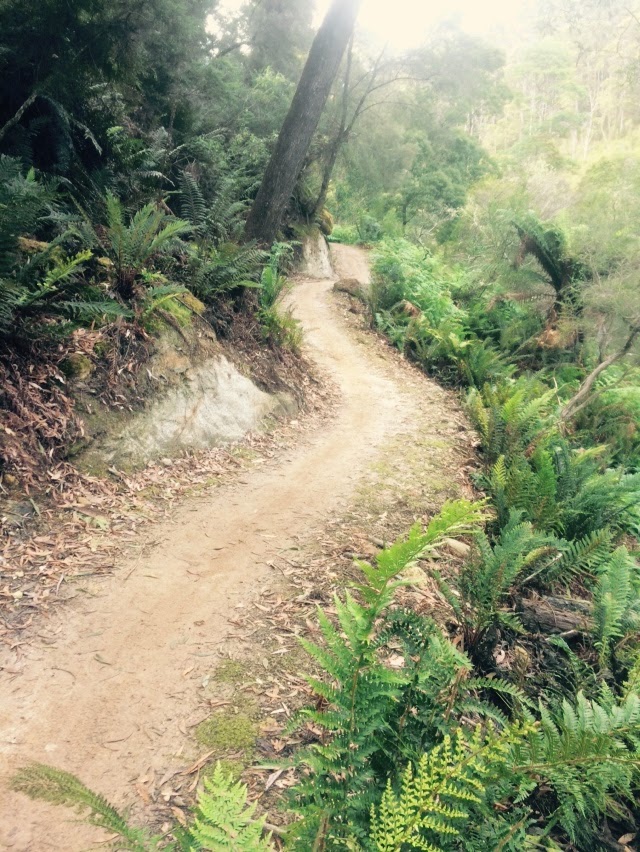 Well not all trails obviously, I never get bored of new trails, but I do get very bored riding the same trail.

Yep, about once every couple of years is my maximum for most trails.

Which brings us to two interesting facts:

Fact one – this post is titled “Blue Derby II” as in this is the second time I’ve been to the Blue Derby trails since they opened and there should have been a “Blue Derby I” post (which there wasn’t); and

Fact two: Not only have I been to the same, distant, trail twice in just over a month … I’ve ridden variations of the Blue Derby loop FIVE times (excuse the capitalisation, but I feel that that should have a lot of emphasis because it is unprecedented). 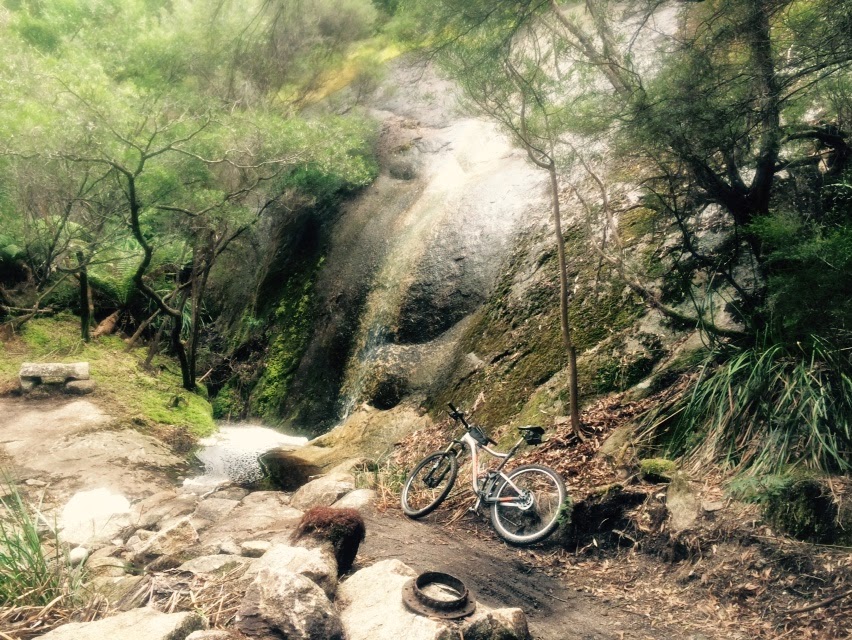 I mean I think they are six stars good … and that’s out of five stars.

They are, in my opinion, a near perfect combination of interesting trails through varied and interesting terrain, and that’s two big ticks out of three for mountain bike trail design (the other big driver for mountain biking trail use is of course closeness to home and well Derby’s about 3 hours too far away to tick that box). 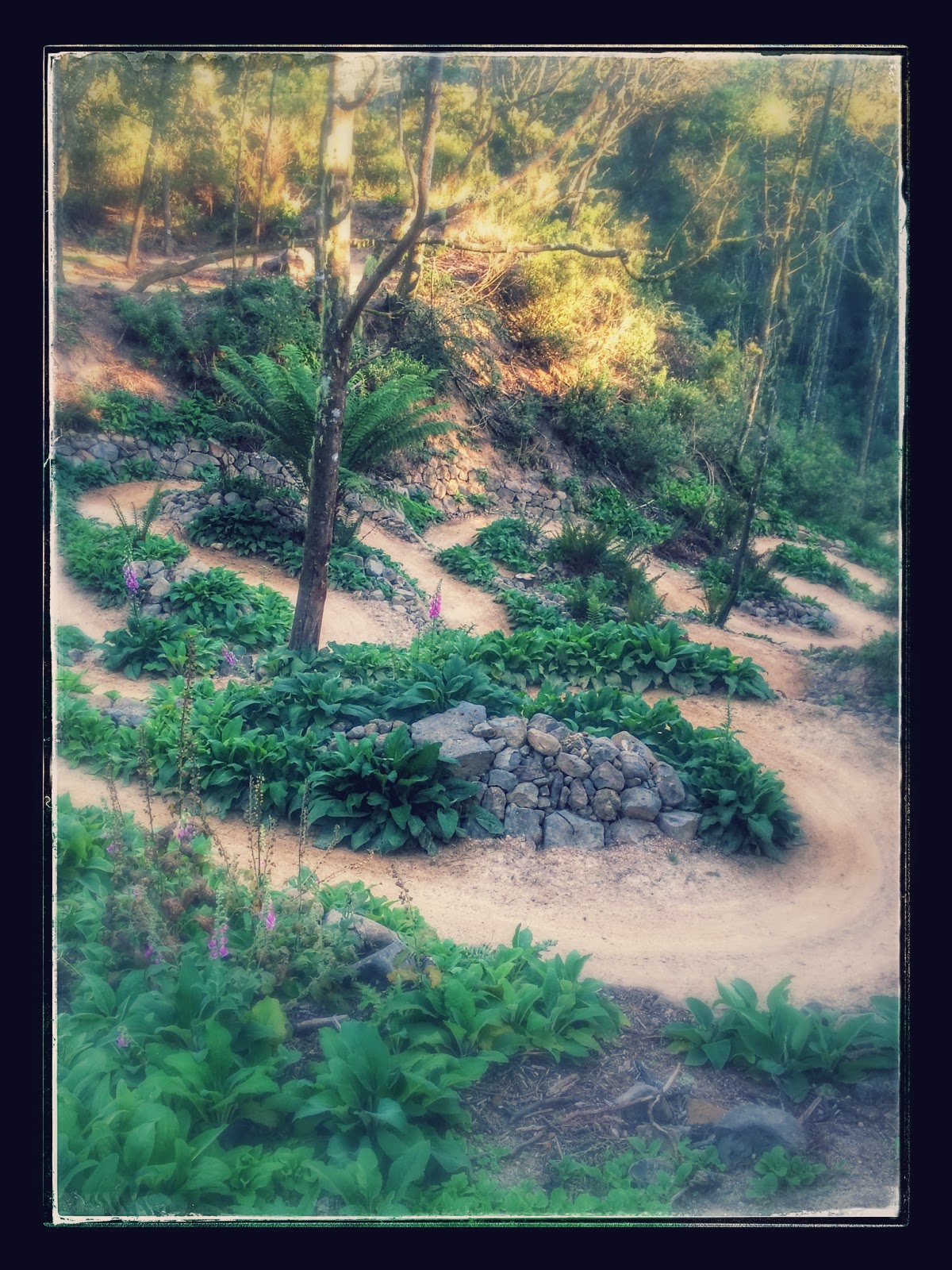 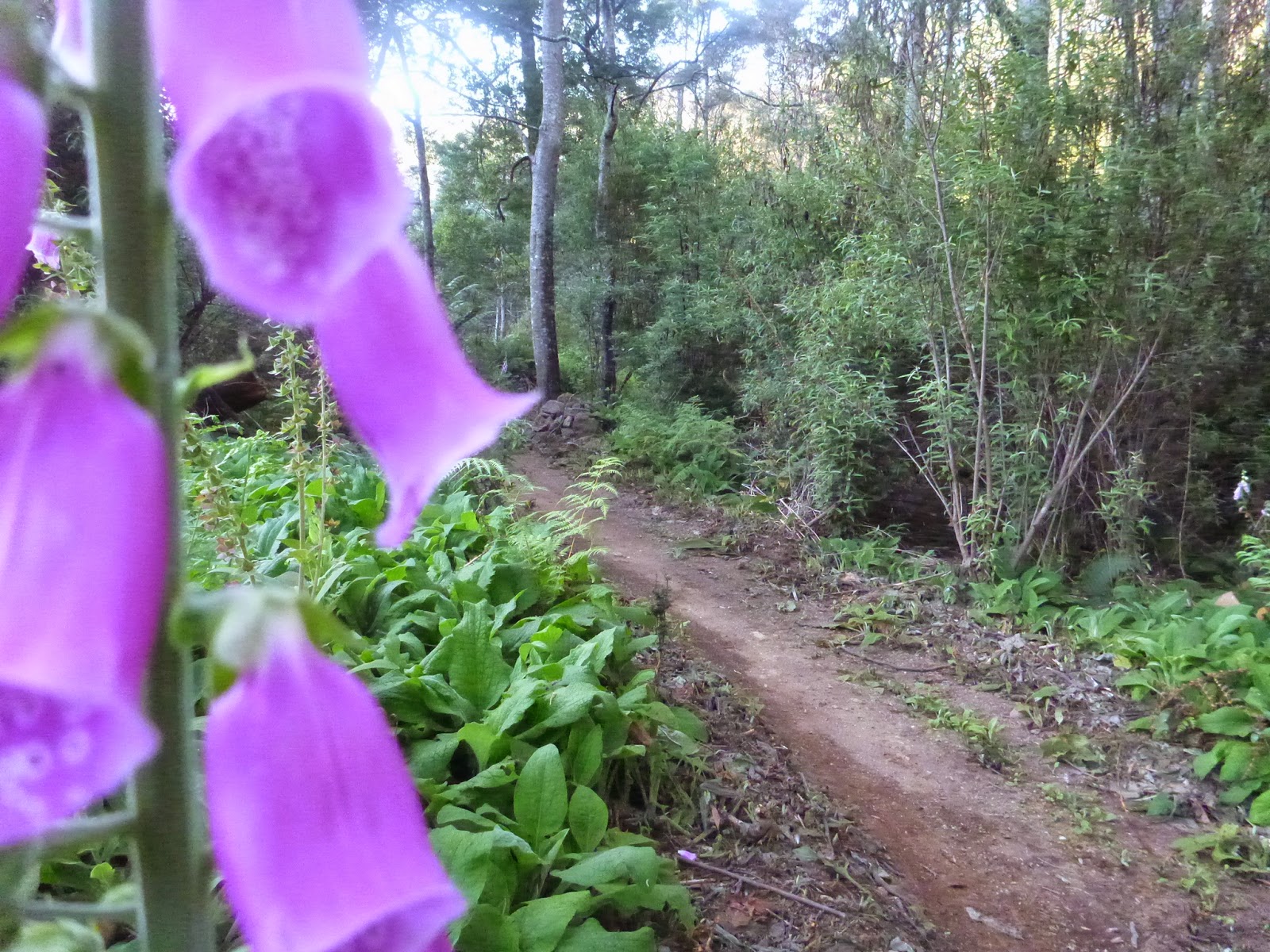 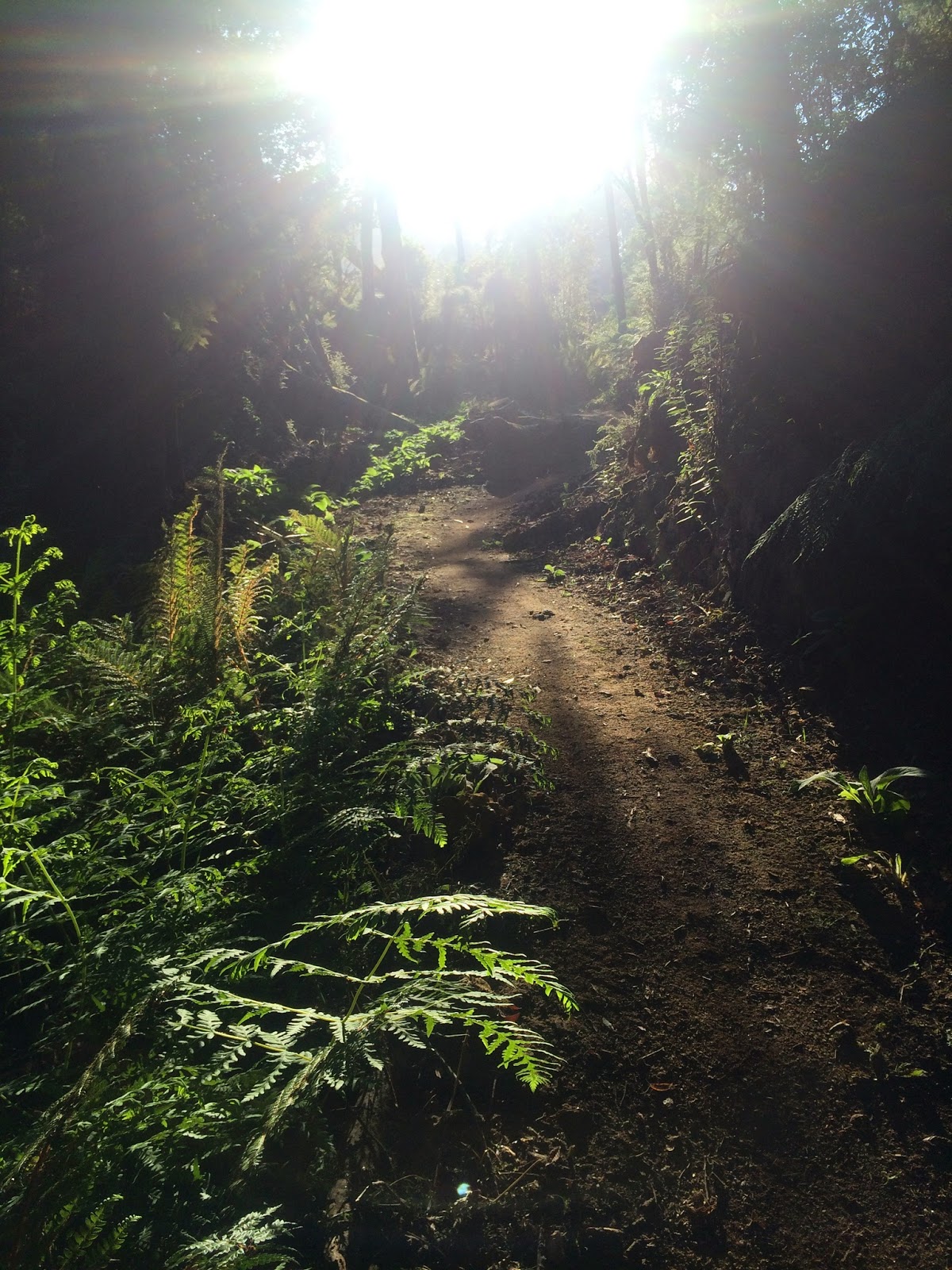 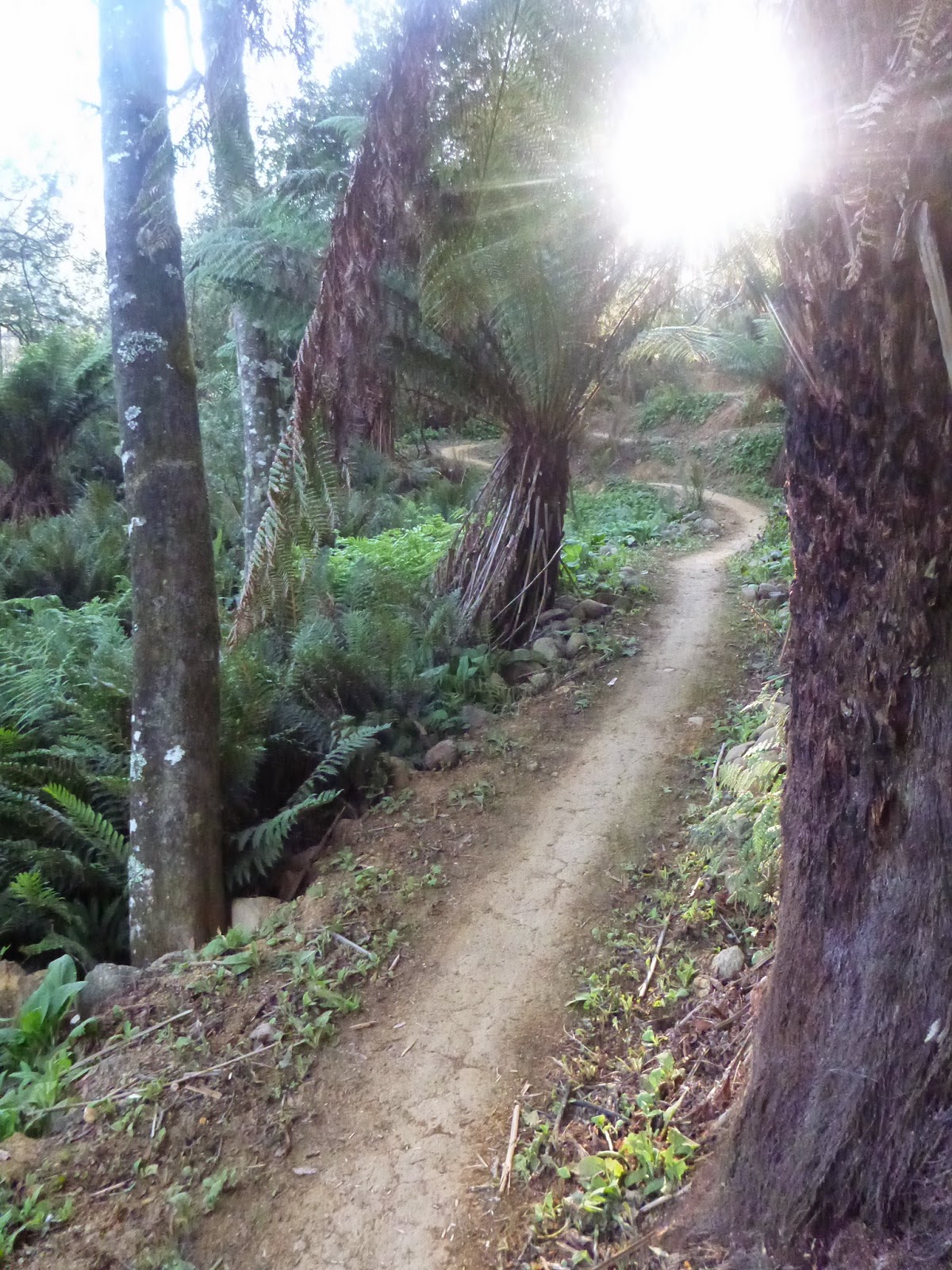 I’m still not entirely (or even vaguely) convinced by the need to give what is essentially one big blue loop, and one shorter green loop, twelve different trail names, but I’m happy to ignore that little detail as being part of the bigger plan, and I do agree that many of the trails do have different personalities, and I guess it might help people with their strava racing or something.  But – not convinced.

If you’ve not been to Derby yet, then here’s a quick overview …

There’s a main carpark (which has toilets, bike wash down station, showers (paid) and is right next to the corner store cafe (have to be honest, haven’t been blown away by the cafe yet).  You can squeeze about 25 cars in here, and while I’ve been able to get a park both times (by turning up early) come 11am the carpark was full, both times. 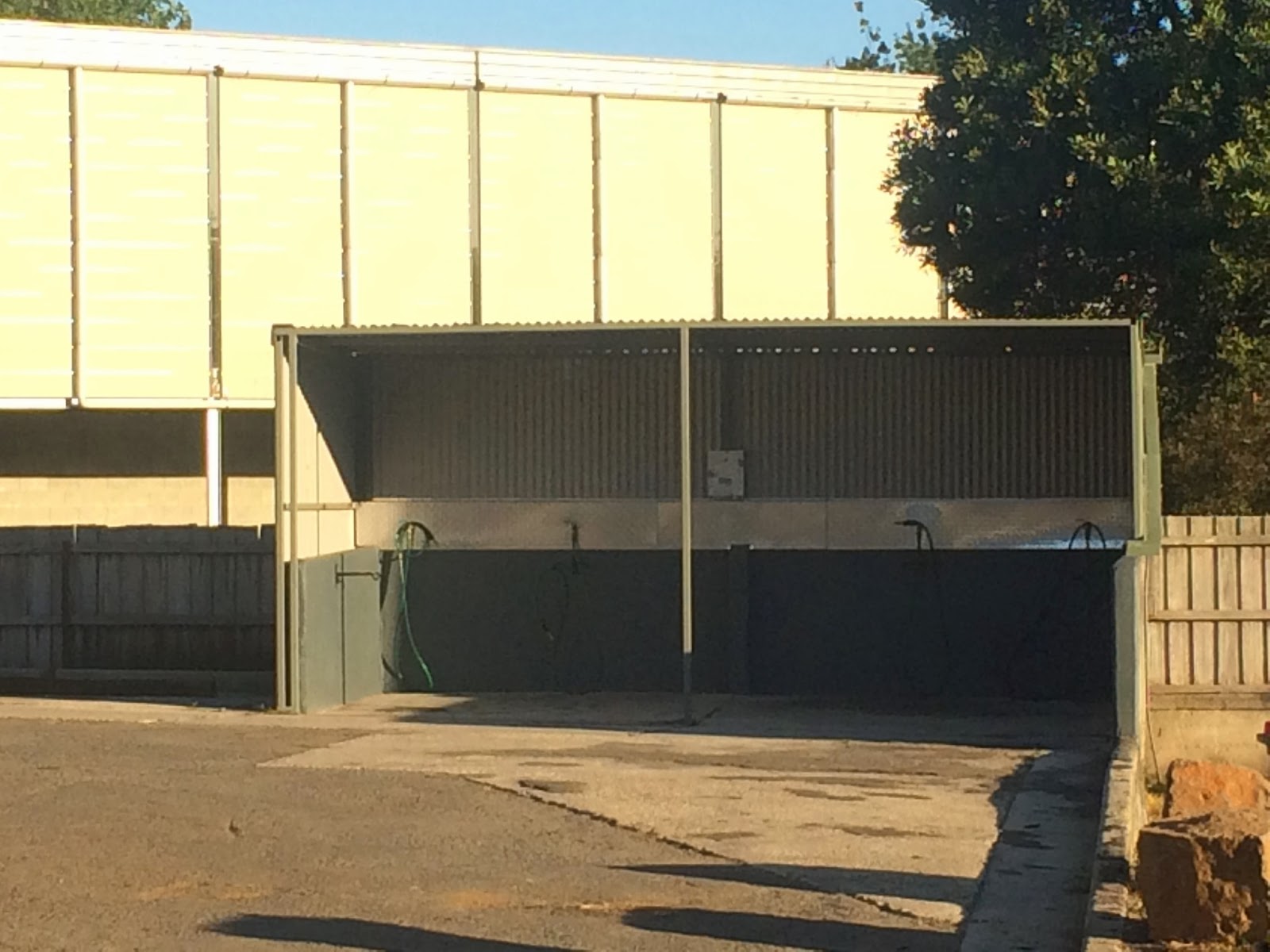 From there you ride a few hundred metres along a small riverside trail (this is the first of the twelve ‘trails’ called Riverside) to the second carpark which can take a lot more cars (and larger vehicles). 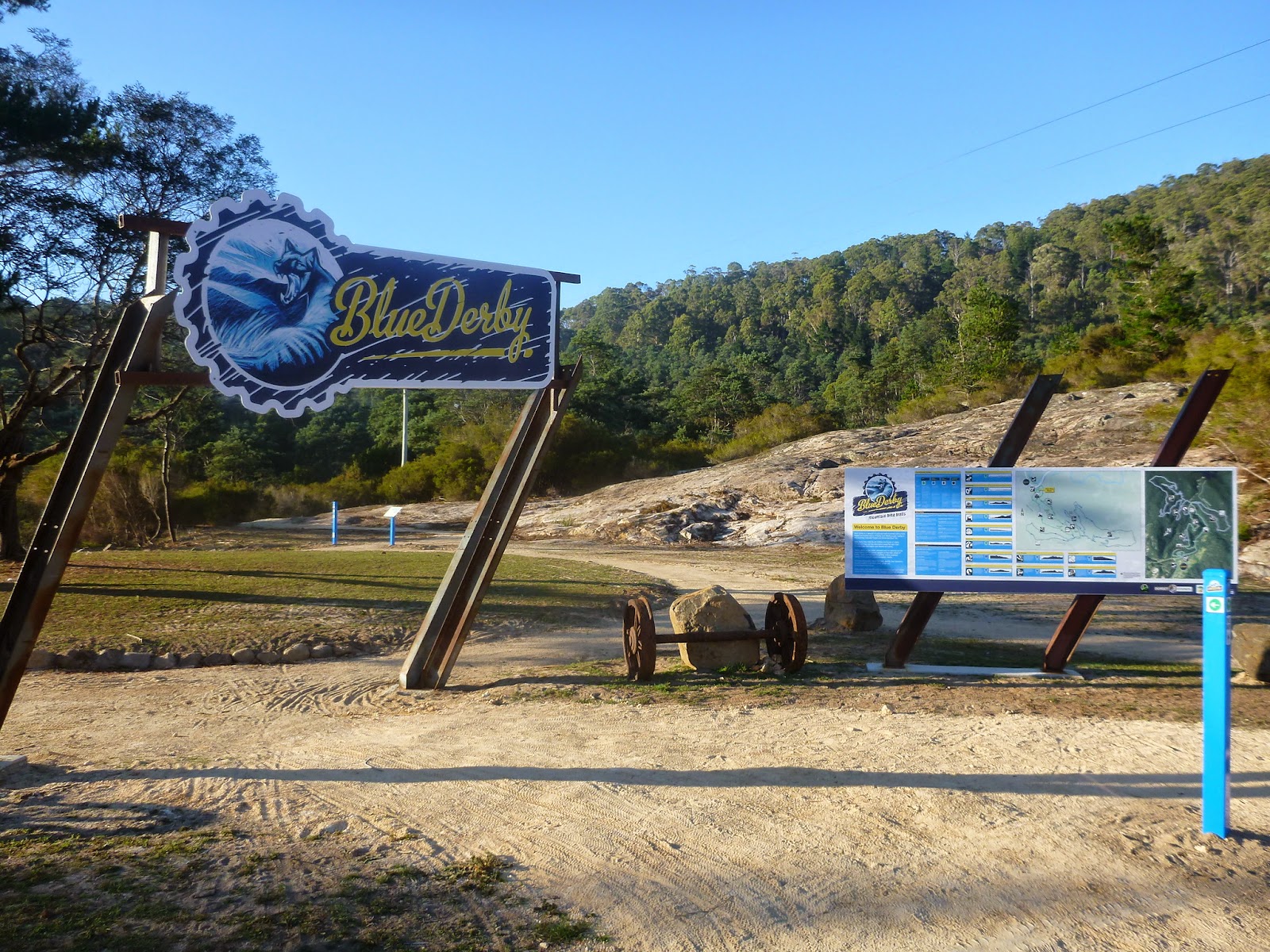 Now here’s the first of my two minor criticisms / suggestions for improvements for this trail, because as far as I can tell the trailhead sign at this point is wrong and both times I’ve been here there has been a common theme of seeing riders standing around trying to figure out where to go next. 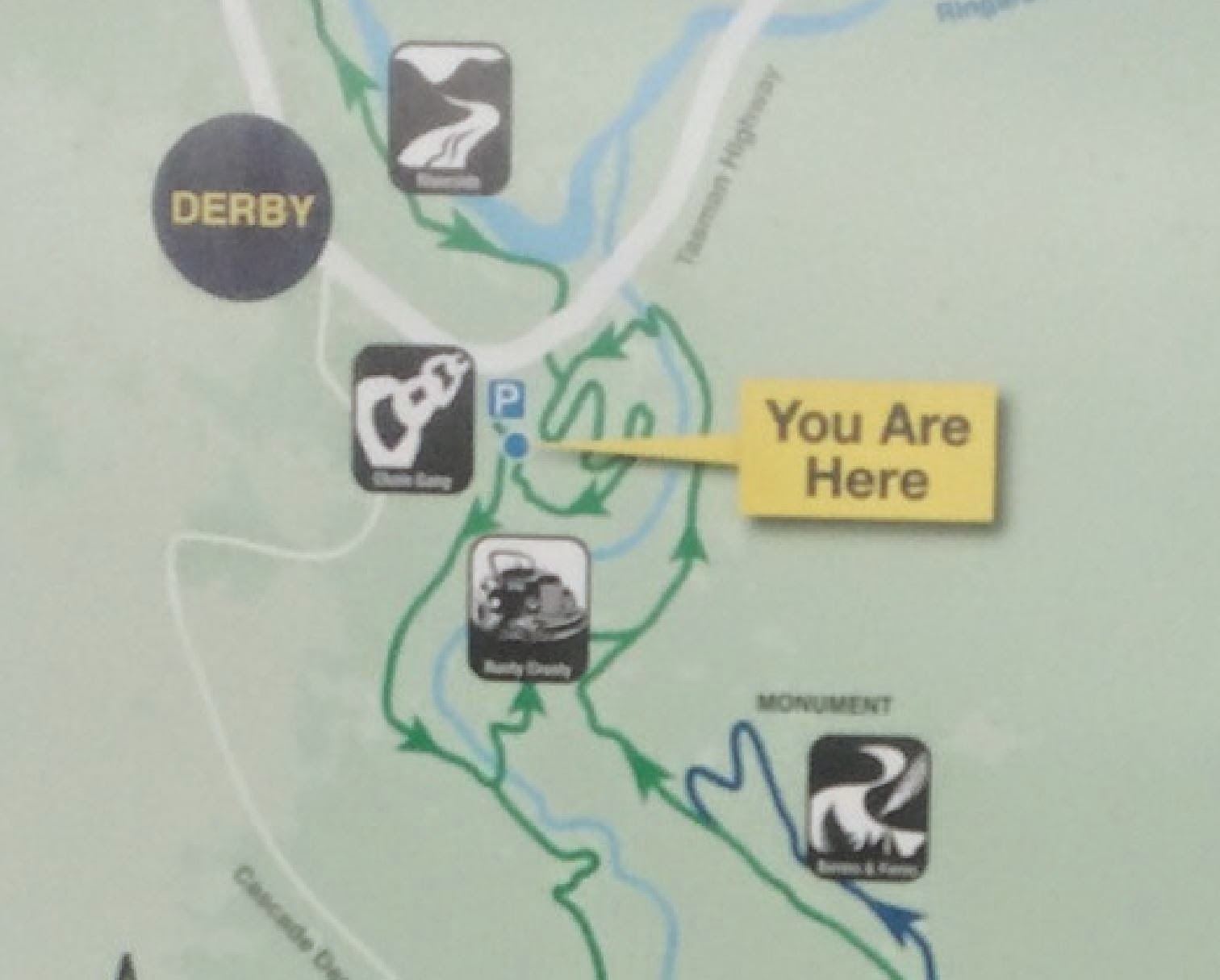 Which makes it look like you just head off on one obvious track from where the “you are here” point is and then come back in on another obvious track.

What’s confusing is that on the ground there is actually a small roundabout of sorts in front of you which doesn’t intuitively match the trail map at all.

However, if you head onto this roundabout in a clockwise direction, the first track you’ll pass is the way you’ll come back, the second track you’ll pass (which has has an out arrow on it) is “Chain Gang” and it actually follows what looks like the way back in on the trail map above.  The good news is that if you go this way, you’ll bag another trail and basically just end back up at the roundabout (at the third track) and then the fourth and final track heading out of the roundabout is probably the one you want to ride as it takes you out to the other trails … 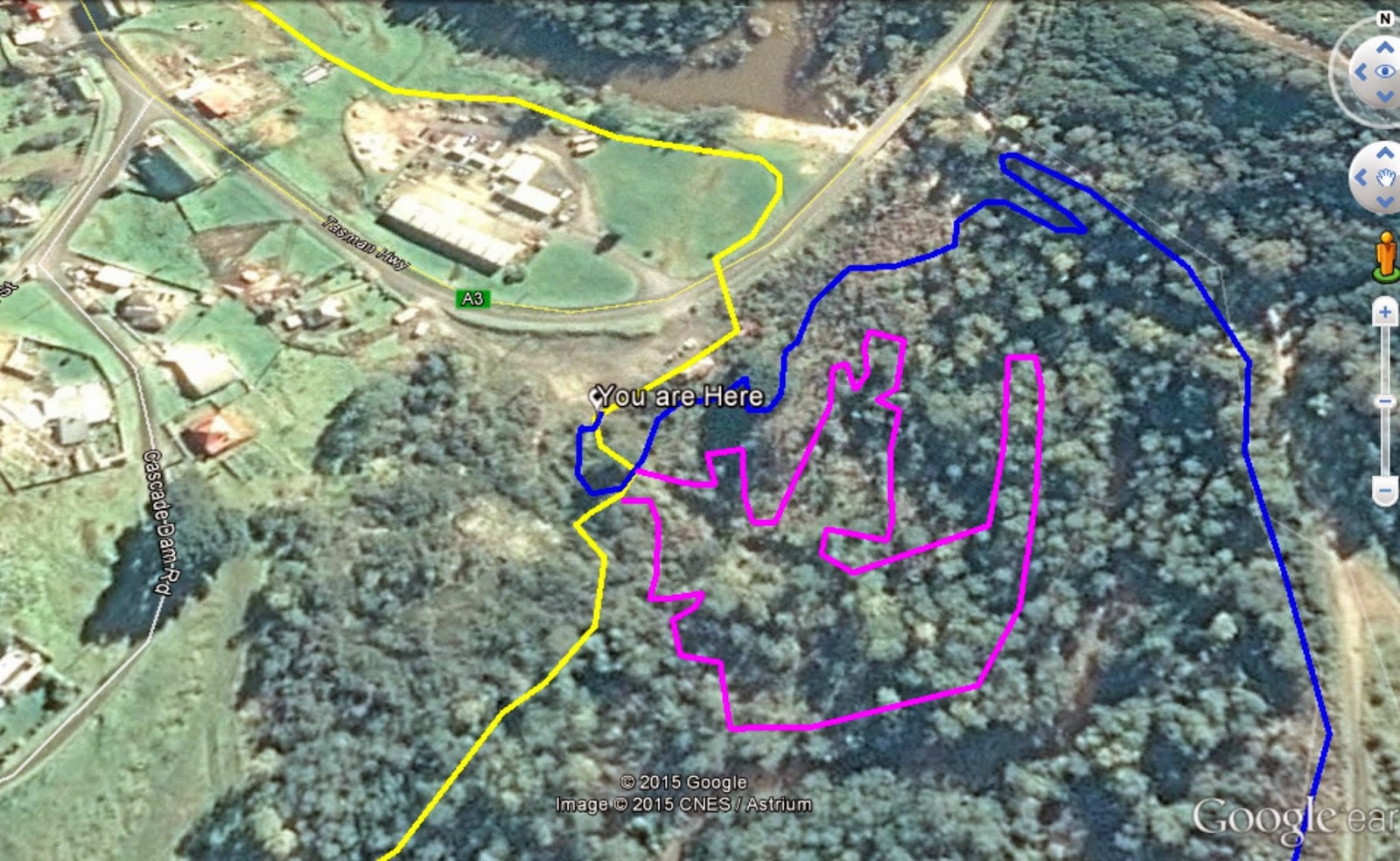 If that’s all just too confusing, then a simpler way of saying it is that from the roundabout you should just follow the track signed out to ‘Rusty Crusty”.  It looks like this … 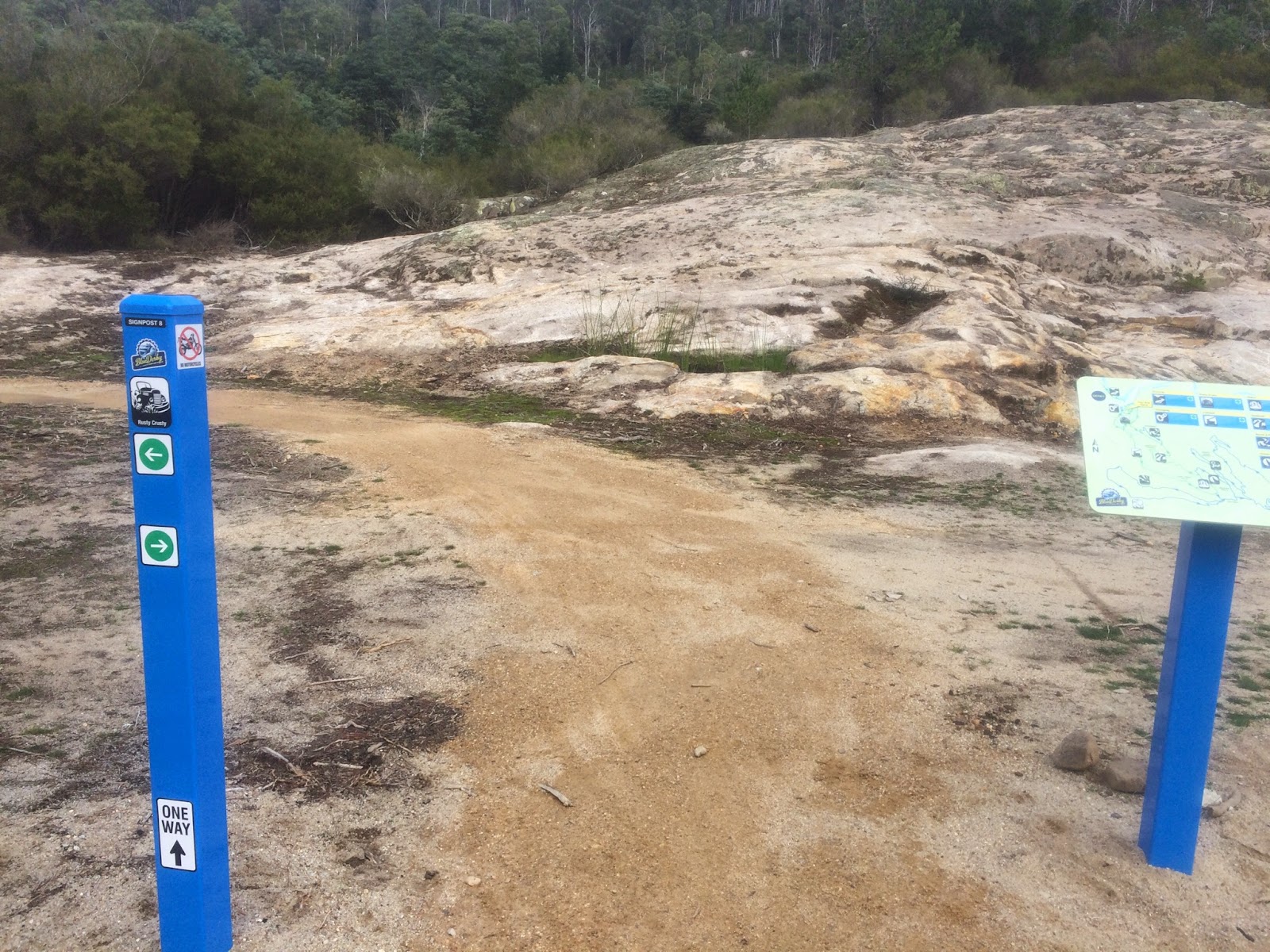 That was a much easier way of saying it wasn’t it?  Wish I hadn’t wasted 20 minutes making that map now.

Feel free to head out and ride Chain Gang for a bit of a warm up, but really the fun starts as you head out this way … and it starts quickly.

You head straight into some gorgeous forest heading up alongside the creek as you climb your way up Axehead (including the incredible switchbacks that you’ll see in everyone’s facebook feed).  This is just gorgeous cycling.

At the top of Axehead, less experienced riders can swing off down the green loop  (“Relics” – which is a fun set of sweeping berms), but for those doing the main circuit you’ll continue onto “Long Shadow” where the forest type and track personality changes (gets a wee bit rougher) as you continue up and out onto the Cascade Dam Road (noting you can skip this trail if looking for a shorter loop by just jumping on over to Krushka) . 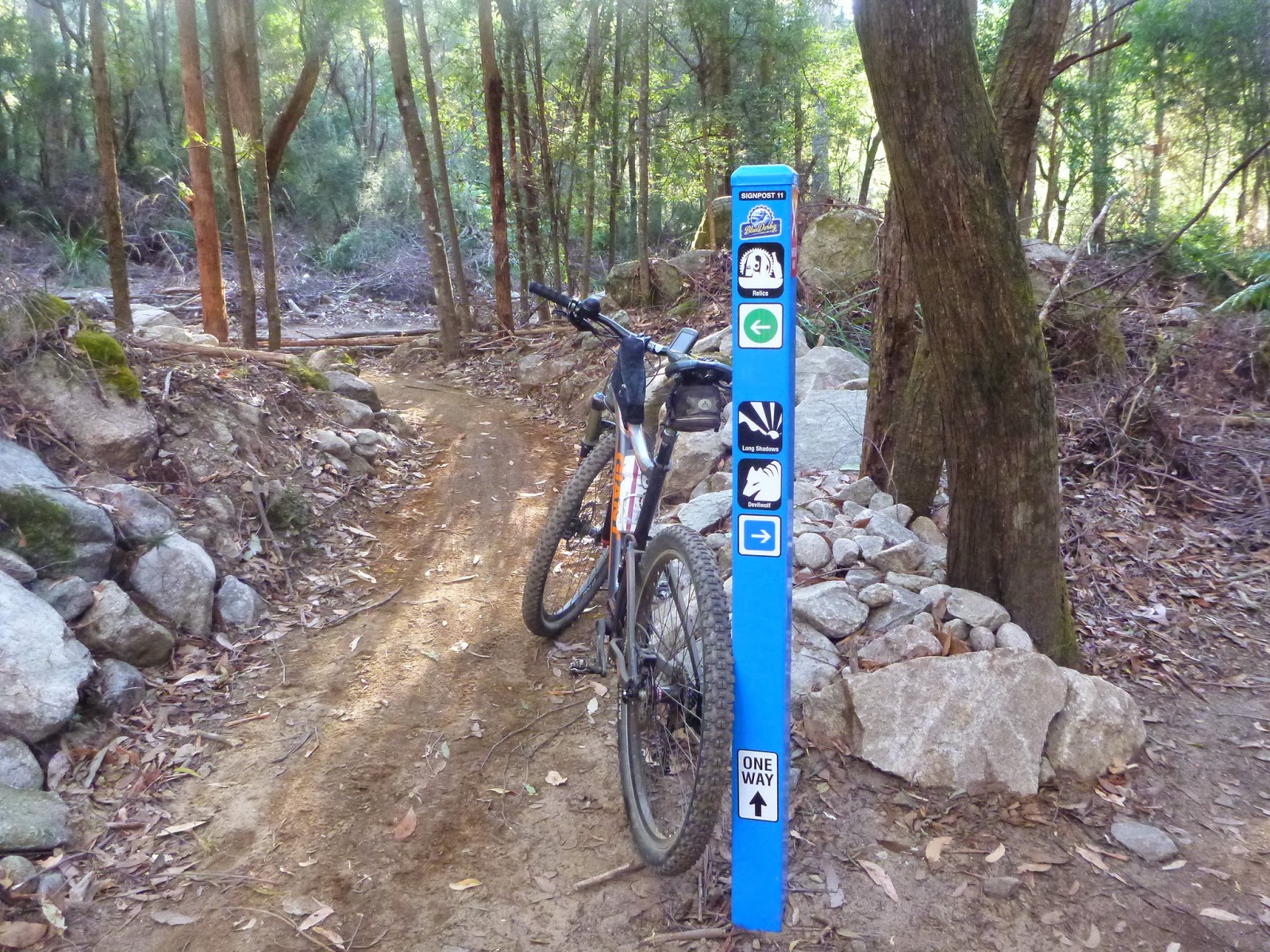 Now at the end of Long Shadow is my only other suggestion for improvements for this trail:  When you drop out onto Cascade Dam Road, there is a sign pointing up the hill, but it really needs either another comfort sign about 20 or 30 metres up the road assuring new riders they are heading the right way and need to keep going (up, up, up) for another 250 metres, or another trail map just before you come out onto the road so you can figure out where to go yourself. 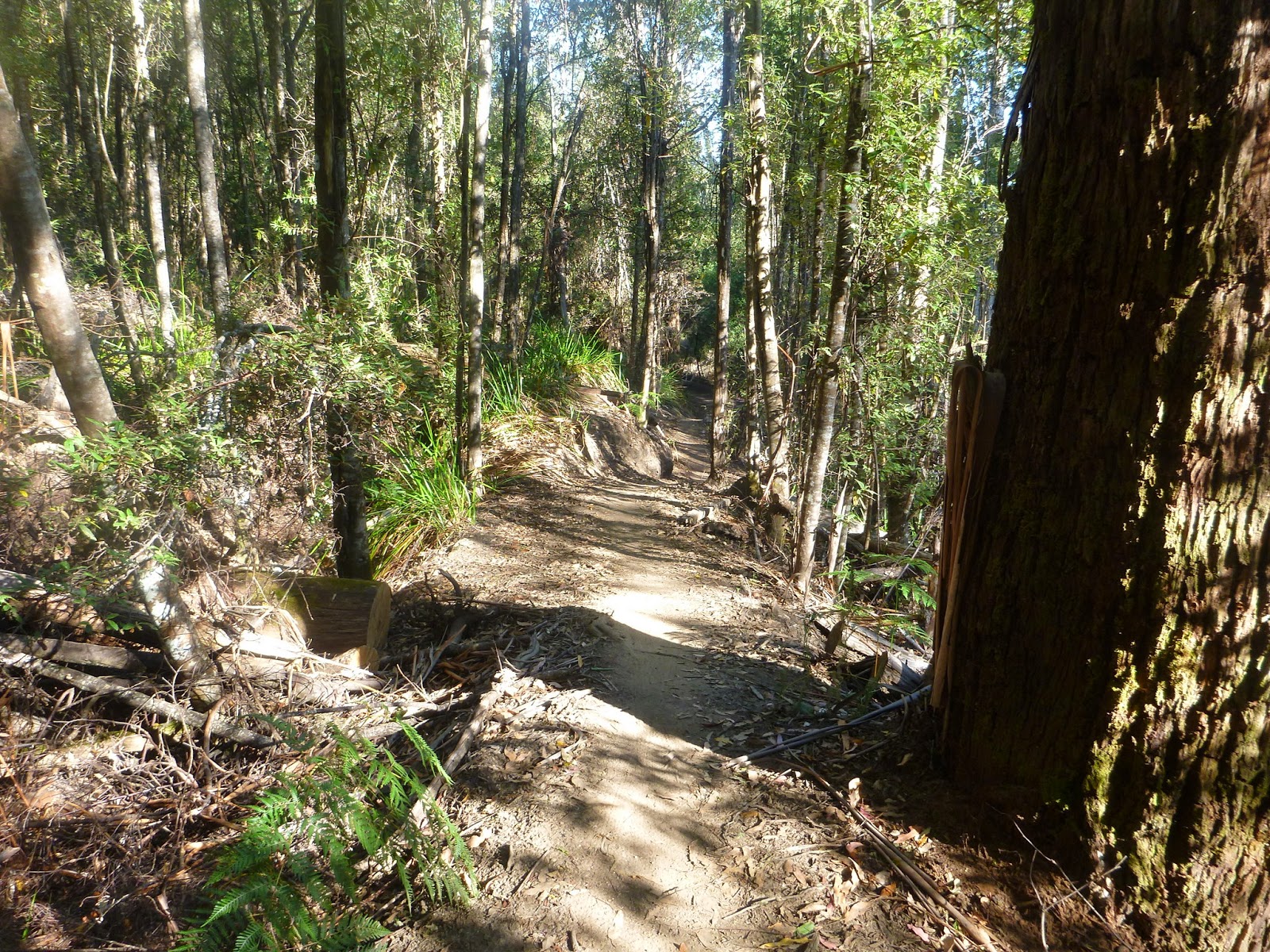 It’s only 280 metres up the road to the start of “Flickety Sticks” (and there is a comfort sign about 200 metres up the road) but it is a really steep climb (if you’ve just come off the trails) and I met a few lost souls at this junction wondering where they should go next.

Flickety Sticks loses all the height you’ve just gained going up Long Shadows, and takes you right back to the junction where you started Flickety Sticks.  The only difference will be the huge smile on your face from the sweeping berms you’ve just come down. 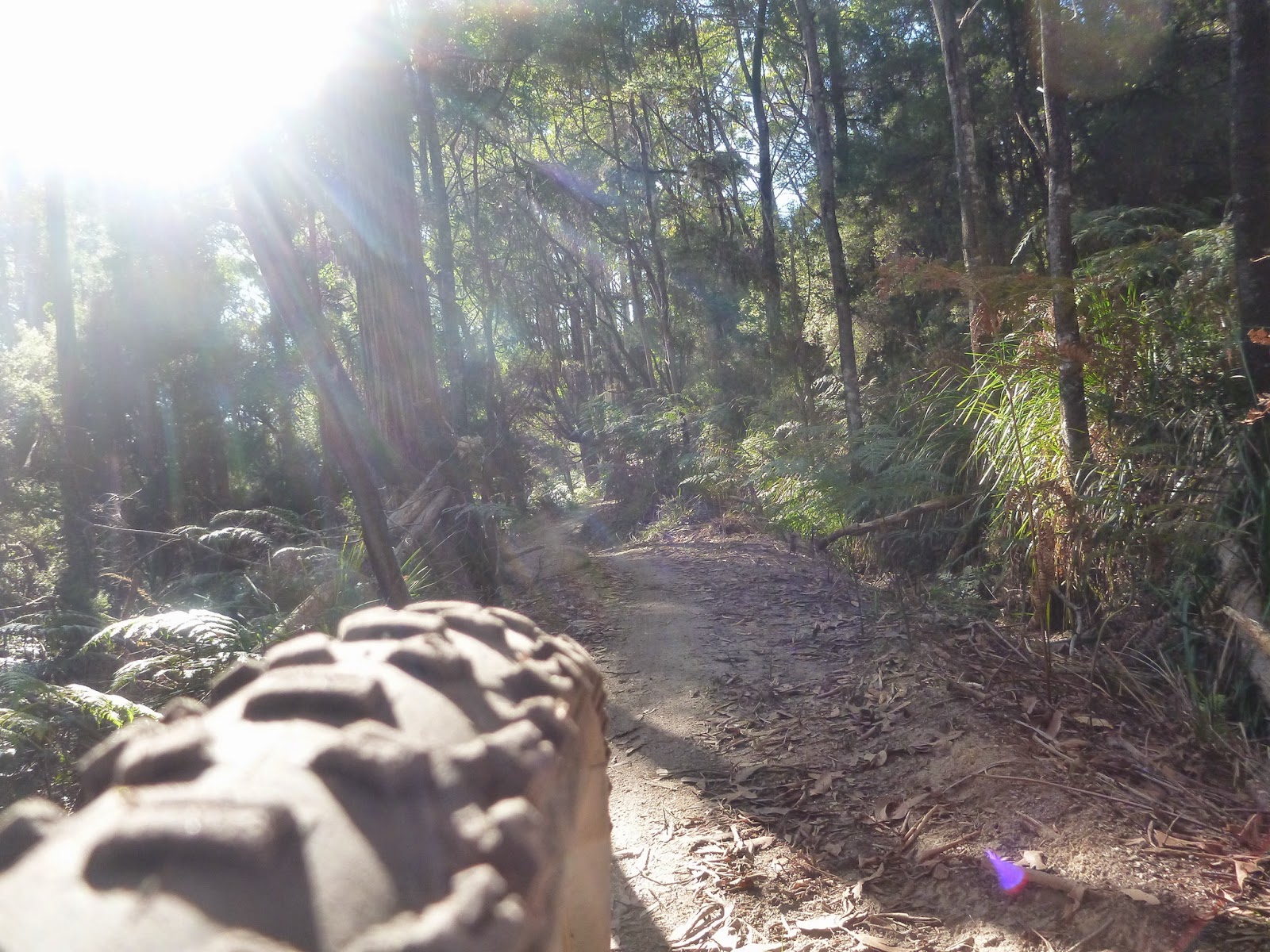 If you’re wondering if this loop is worth it, then yes it is, and you will want to come up this way post April 24th to explore the new set of trails opening up past here anyway.

Back down at the bottom of Flickety Sticks, it’s across the small green bridge and into a whole new world of fun as you play around in the river flow rock. 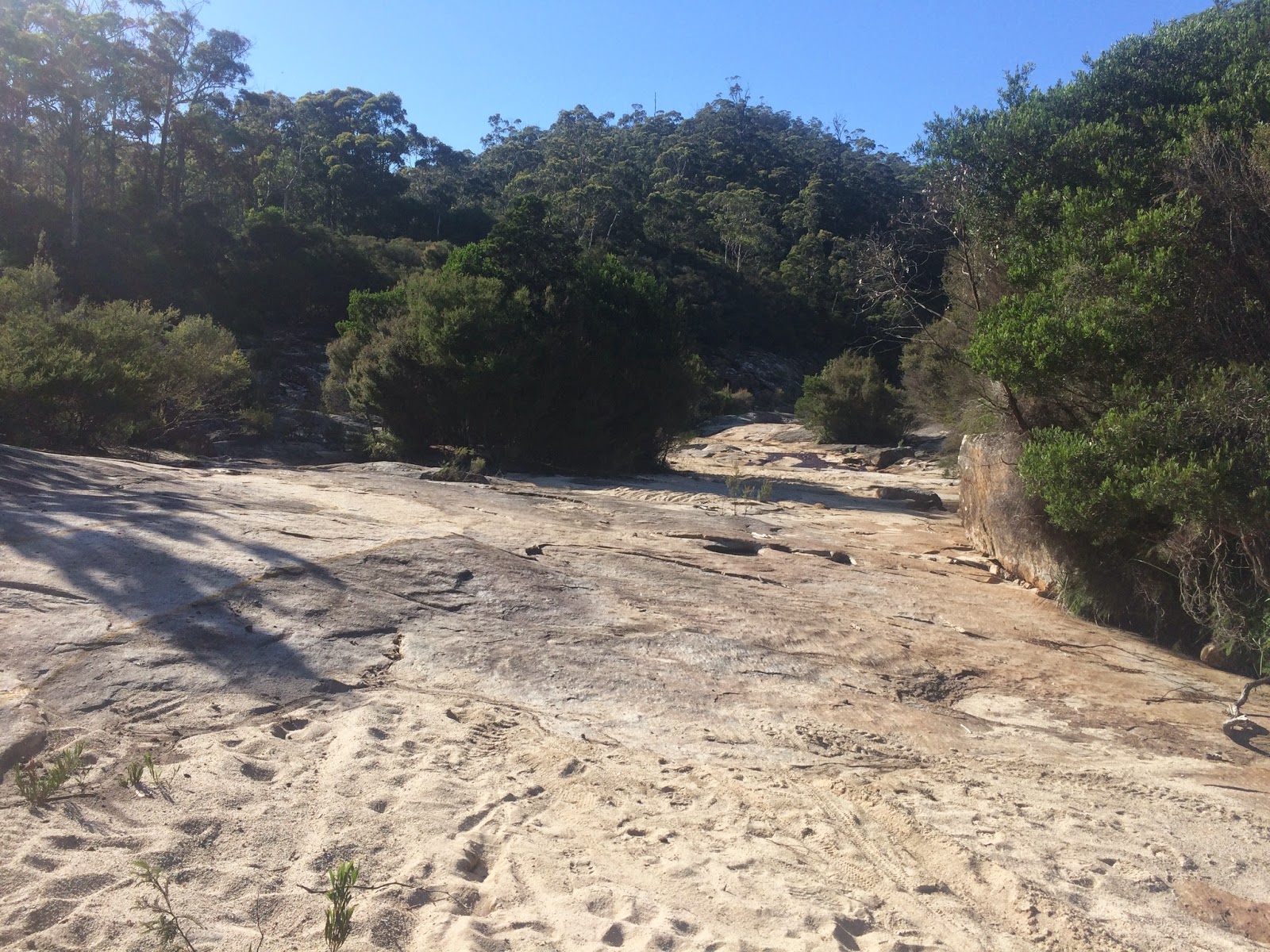 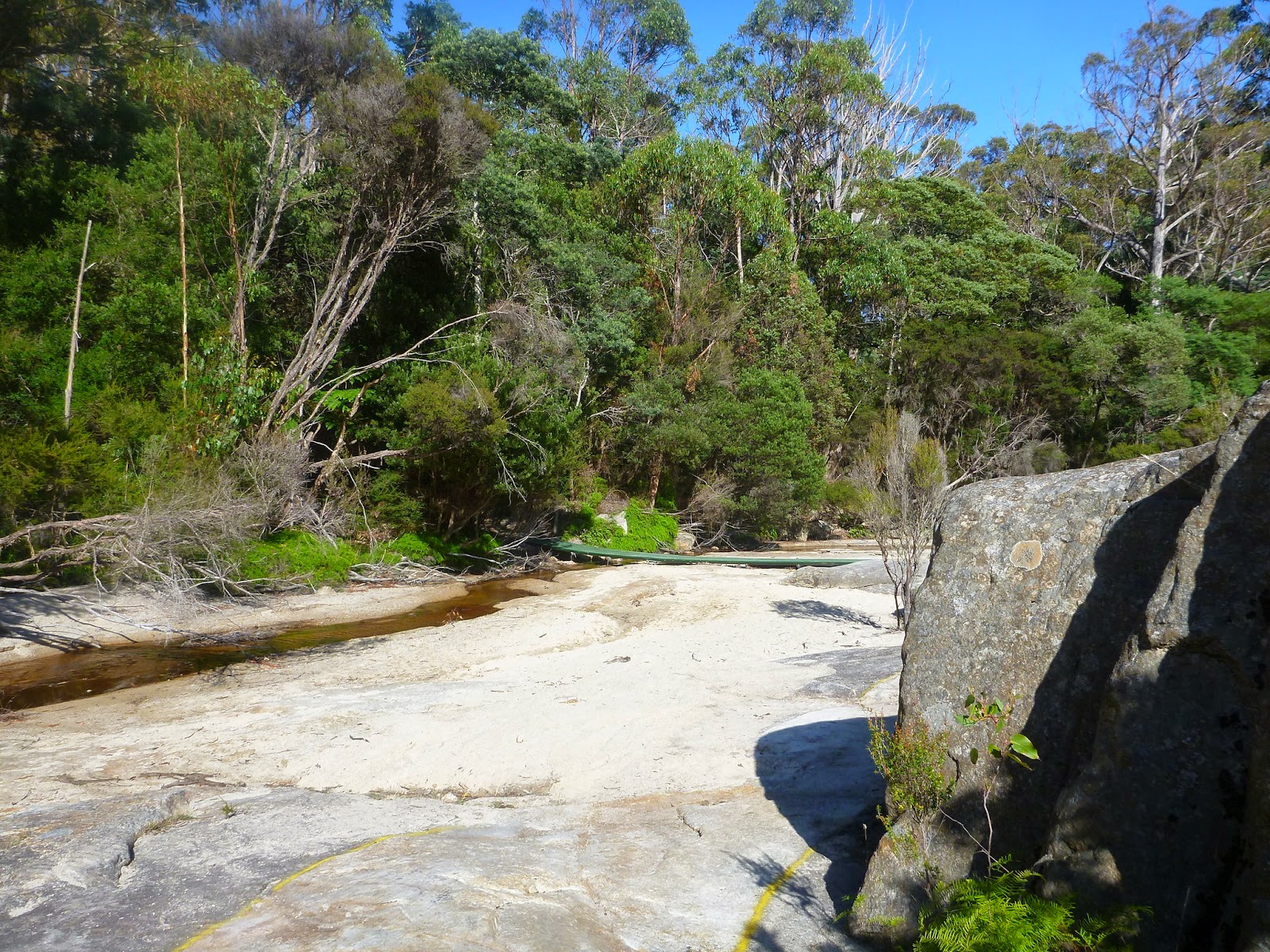 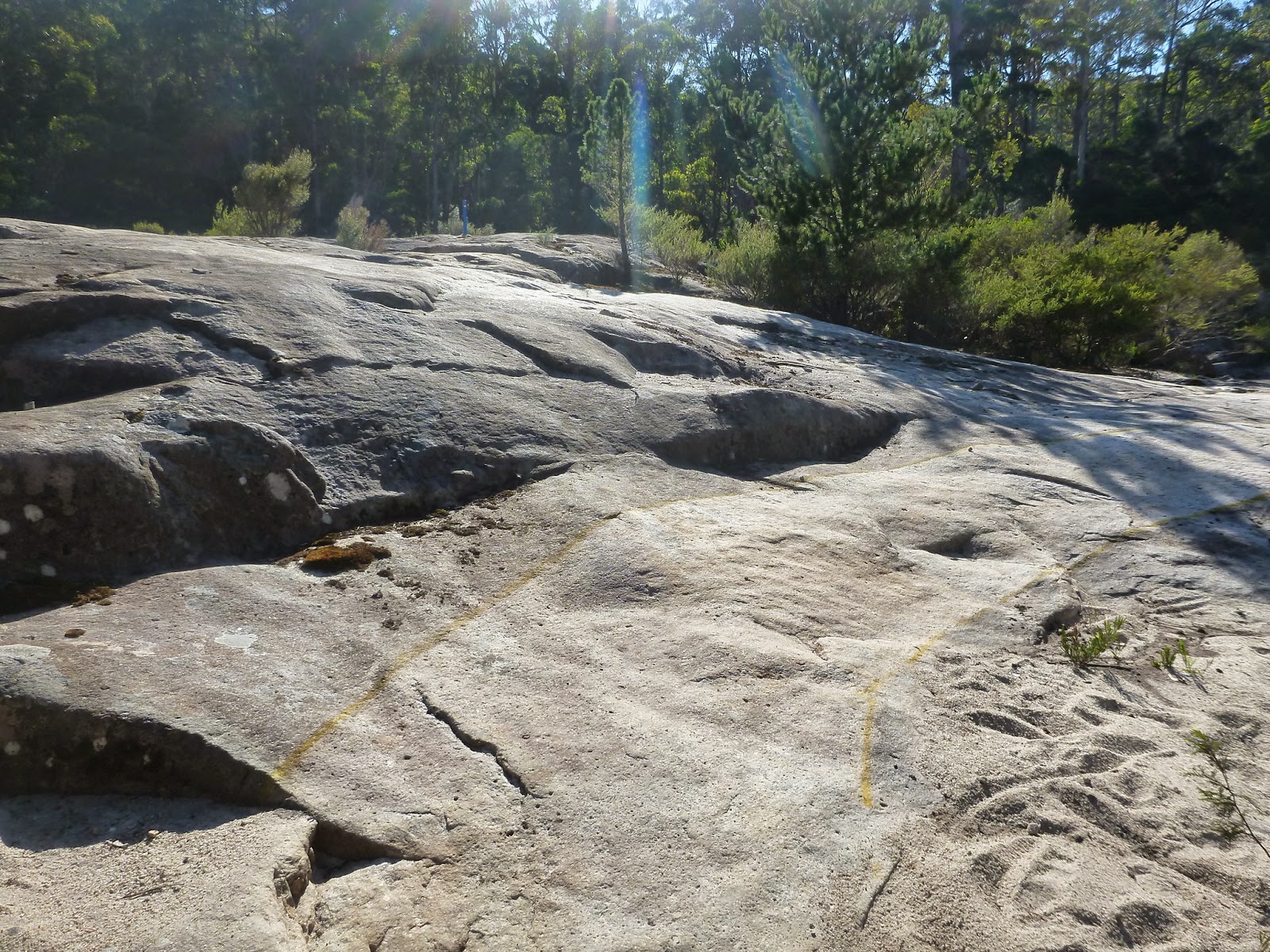 This is inspired trail building in my books.

Krushka is the current highlight of these trails, and you have to ride it to know why it’s so popular.  Sure, it starts with a bit of climbing, but there’s lots of nice variety in both track condition and terrain to distract you from it. 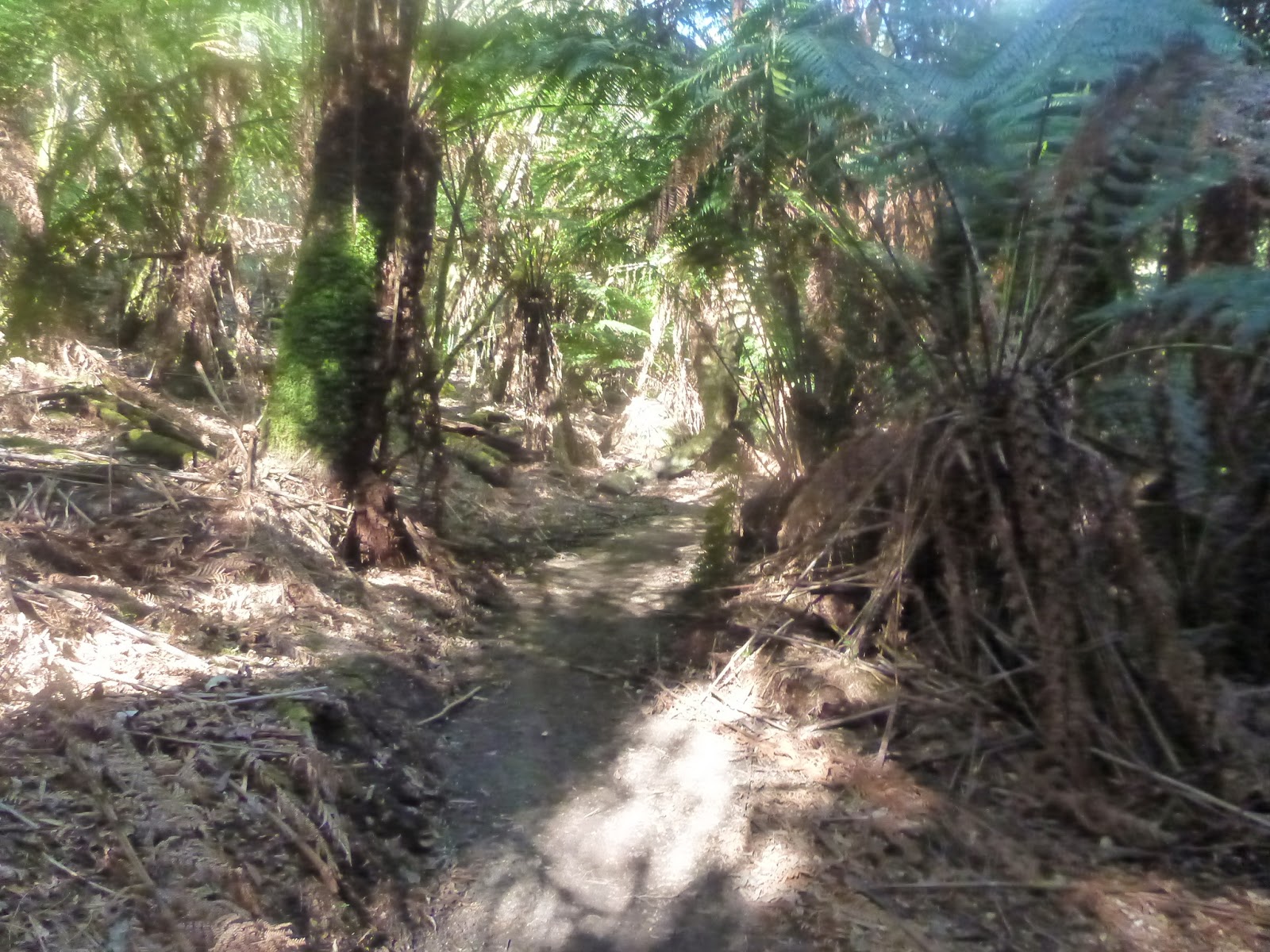 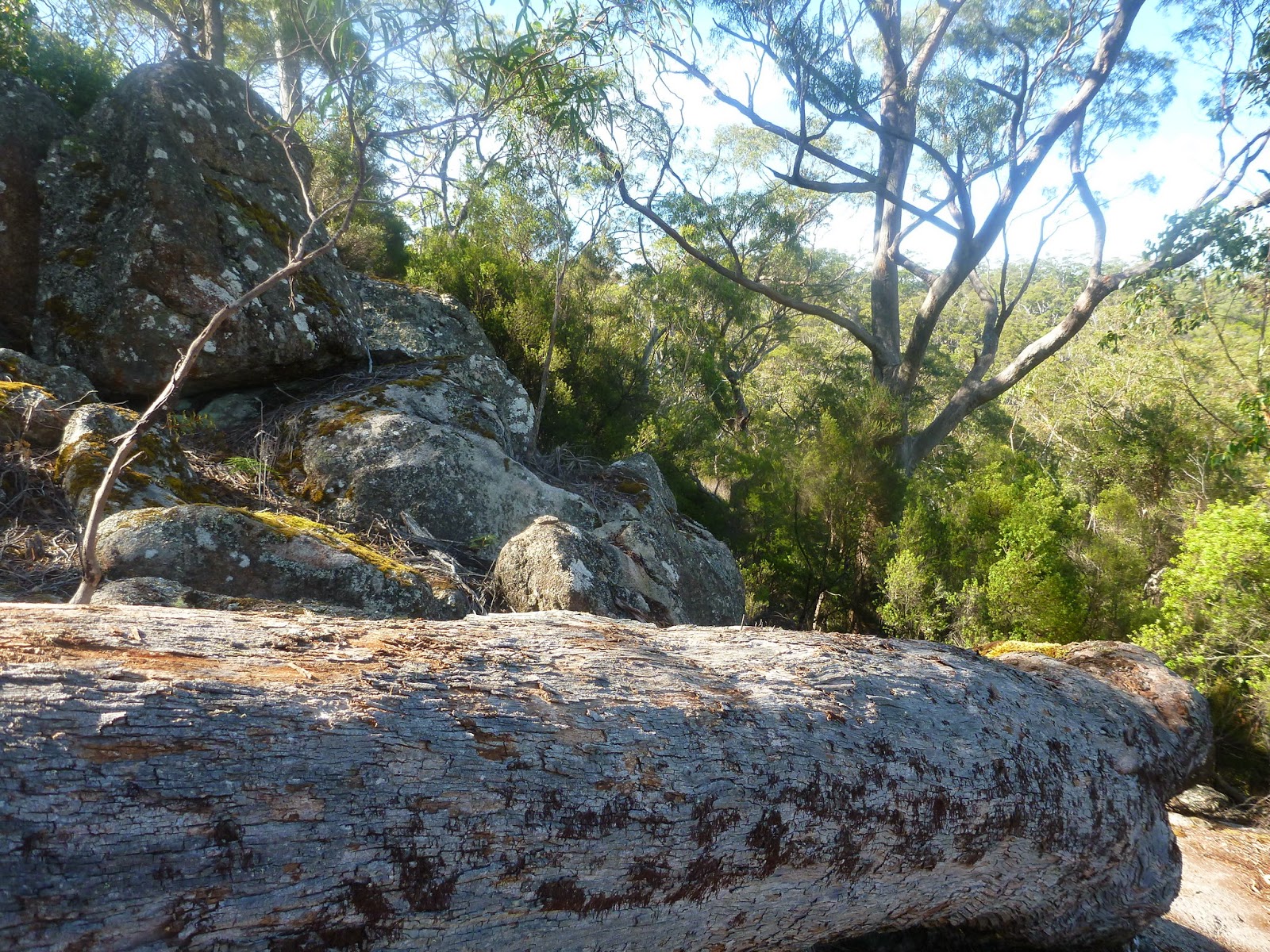 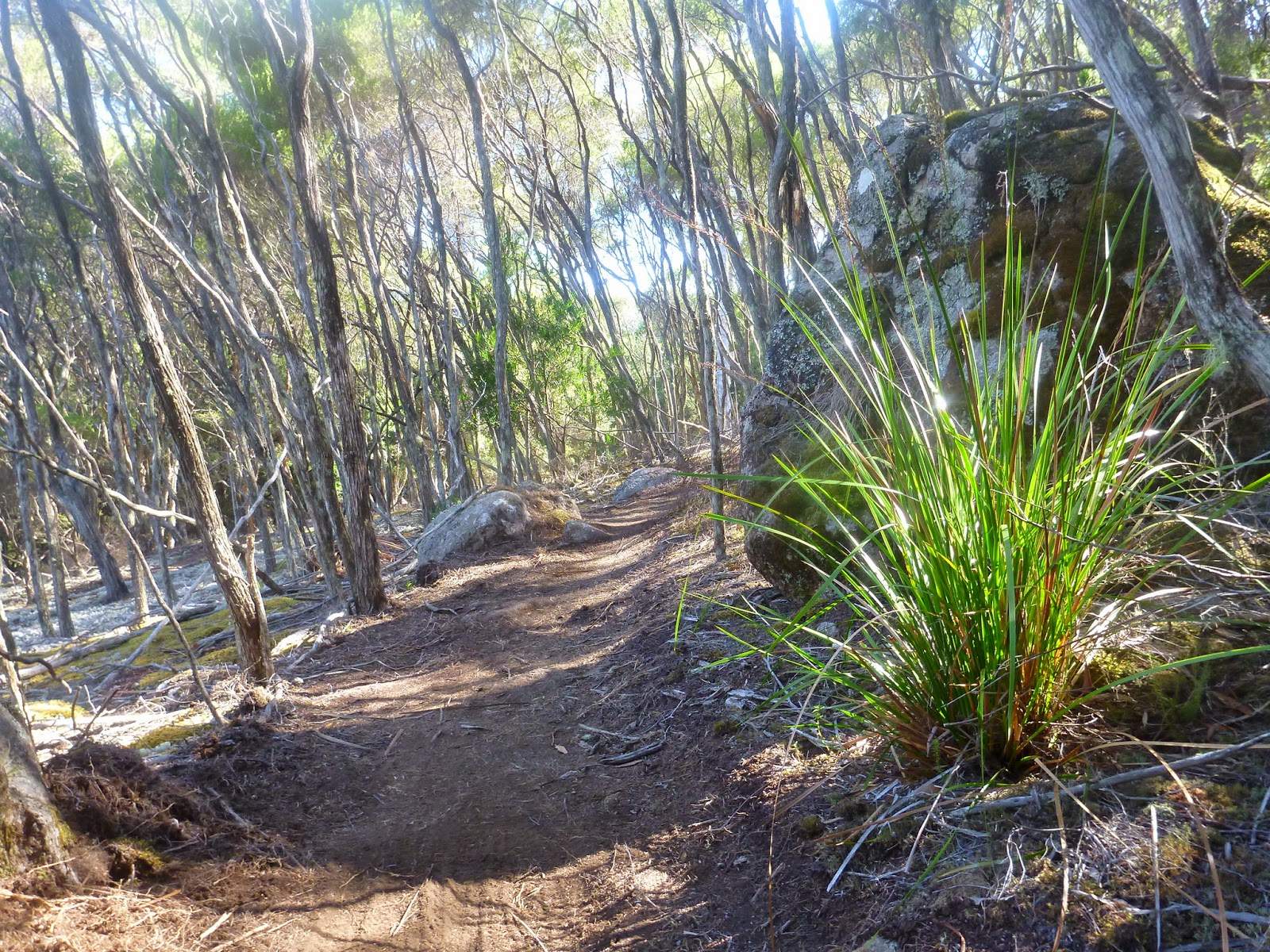 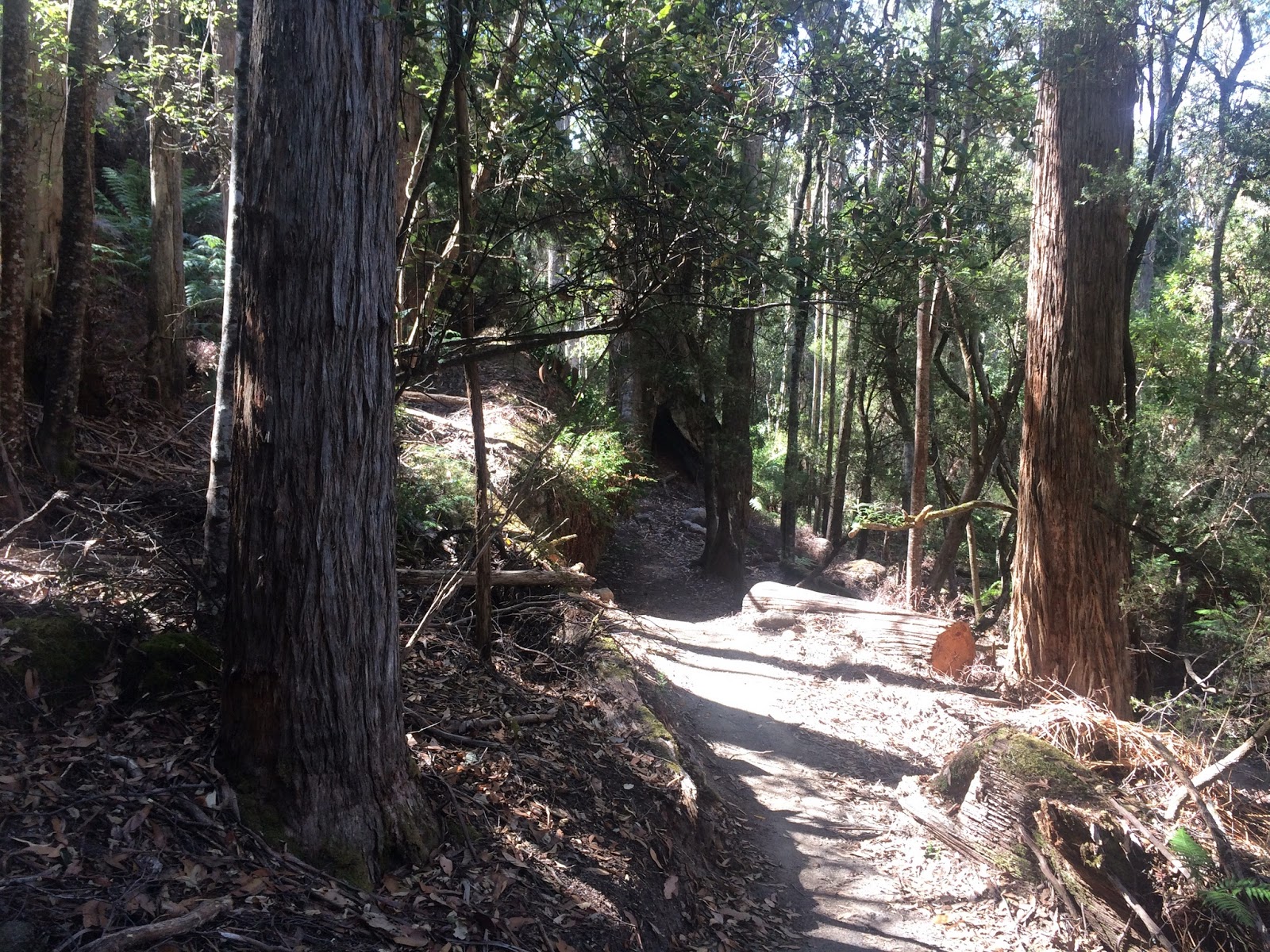 Now there are two shortcut options allowing you to cut over onto either Howler or Rattler, both of which cut out the Krushka loop  (and I’ve ridden them both, just to see what I would see) but to be honest if you need to cut distance out of your day at Derby, skip Chain Gang, Long Shadow and Flickety Sticks – don’t miss Krushka – that’s like going to Paris and not visiting the Eiffel Tower.

No matter which way you go, you’ll be blown away by the terrain and the track, and you’ll just have to ride it to understand why.  Eventually you’ll drop back down onto a vehicle trail which you follow for 20 metres  before jumping onto the easier “Sawtooth” track.  I really like sawtooth, even though I always seem to misjudge it’s corners and either go too fast or too slow.

The Berms and Ferns track towards the end doesn’t really grab me (but that could be because I hit a snake the first time I went down it and now do it at 7kms/hr) but it is worth following it just to visit the monument before the final fun run back to the Start (and I mean fun!!!). 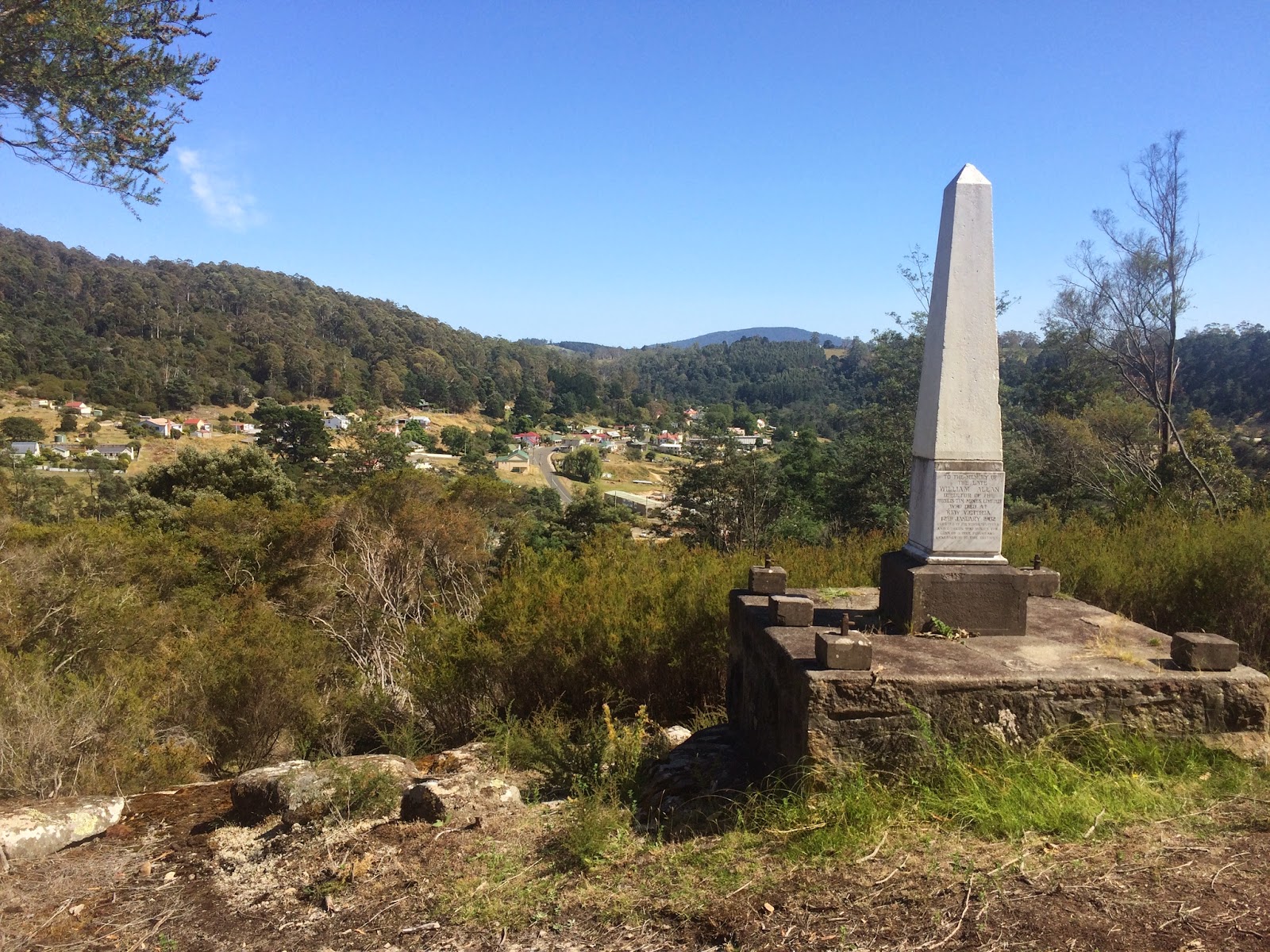 Just for completeness, I also headed out and rode “Rusty Crusty” which is a shorter easy circuit, but I have to be honest and say I didn’t get it as a route as, despite going near the very cool Old Derby Tunnel, it actually doesn’t take you to the Tunnel, or even provide signage showing how to get there, and then when I was riding back from the tunnel I noticed I could watch everyone riding up the cool switchbacks on the other side of the river which just got me thinking why didn’t they take this easy circuit up the switchbacks, then across the river and past the Derby Tunnel which then would have made a very cool loop.

However, I suspect that the terrain must just have been too hard in there or something, because World Trails seems to have just got everything else so right that I can’t see they wouldn’t have thought of this.

So that’s Derby – if World Trails keep building stuff like this, I might, just might, be convinced to give up my rambling ways and spend more time actually riding the same trails.

And that’s the highest praise this rambler can give.