A while back now, I got *really* grumpy at Glenorchy City Council because they were doing some works on a section of the inter-city cycleway, and as this closed the cycleway, they put up a “Cyclists this way =>” detour sign pointing off down Sunderland Street … and then basically left you to your own devices in figuring out how, and when, to get back onto the cycleway.

And this sort of thoughtlessness really annoys me …

I mean, surely it occurred to someone when they put up that detour sign, that there might be a whole lot of cyclists (and walkers) that wouldn’t know where they should now go, and what the best way around the works would be, and so you’d think they would put up some signs pointing cyclists (and walkers) back onto the cycleway again as well – wouldn’t you?

It was so annoying, and I would froth about it for literally minutes.

Then I’d forget about it completely … like I tend to do.

And that was OK because I (yes, it is all about me) didn’t ride out that way very often.

But now exactly the same thing has been done by Clarence City Council and it confronts me every day, making me feel like a goldfish trapped in a bowl … without signage telling me which way around I should swim (OK, that analogy didn’t really work but I can’t be bothered changing it). 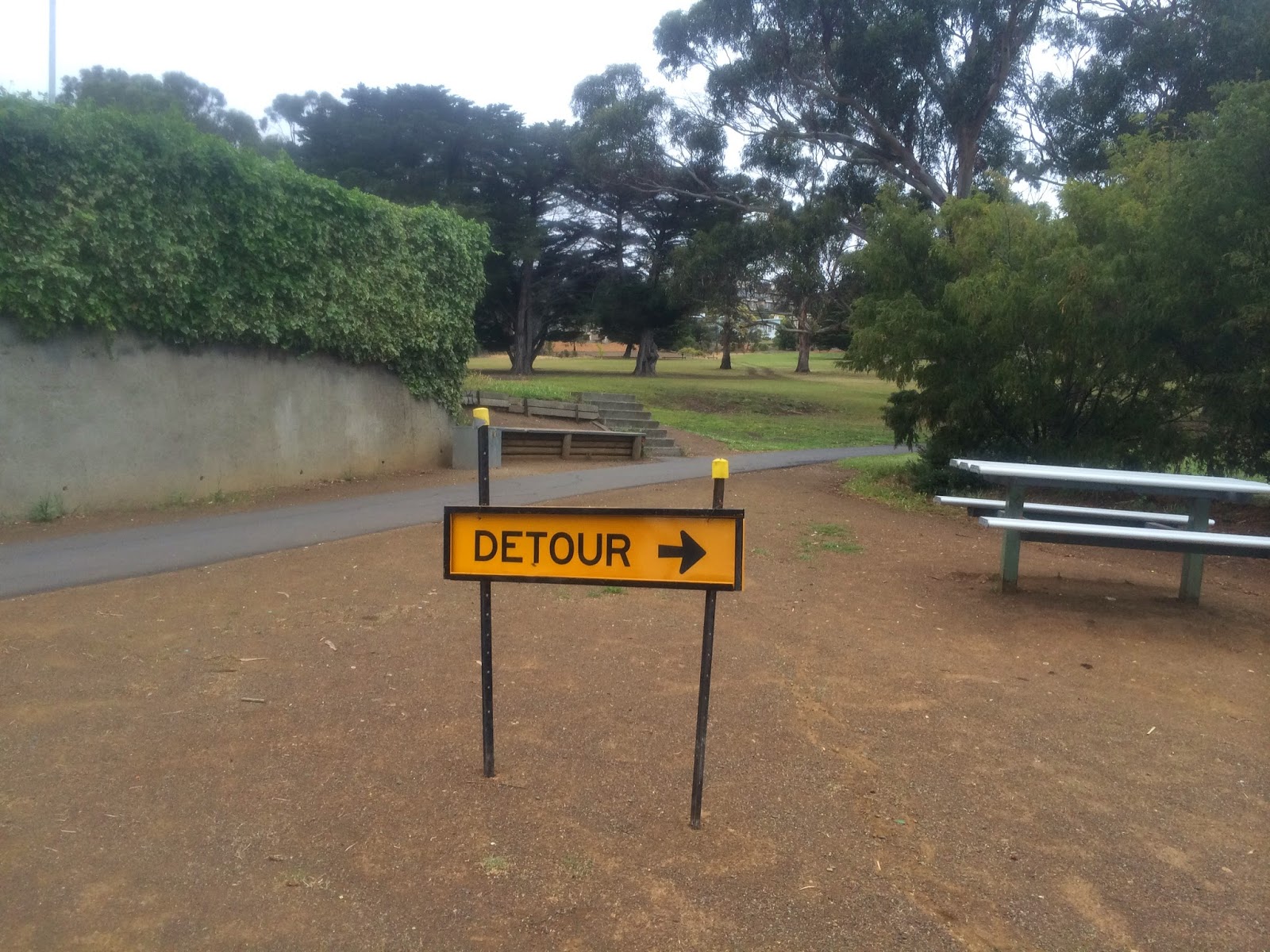 Yep, like I suspect many other cyclists, I was happily cycling into work the other day only to find a big “DETOUR” sign (rather unhelpfully positioned 150 metres down a big dog-leg) telling me to go around the worksite, so I dutifully set off to follow the detour… only to never see another detour sign again.

Why is it so hard for someone to think “Hmmm … maybe cyclists and pedestrians won’t know the area, or where we’re working, and maybe we should set up some comfort signs to help them navigate their way around the work site …“ 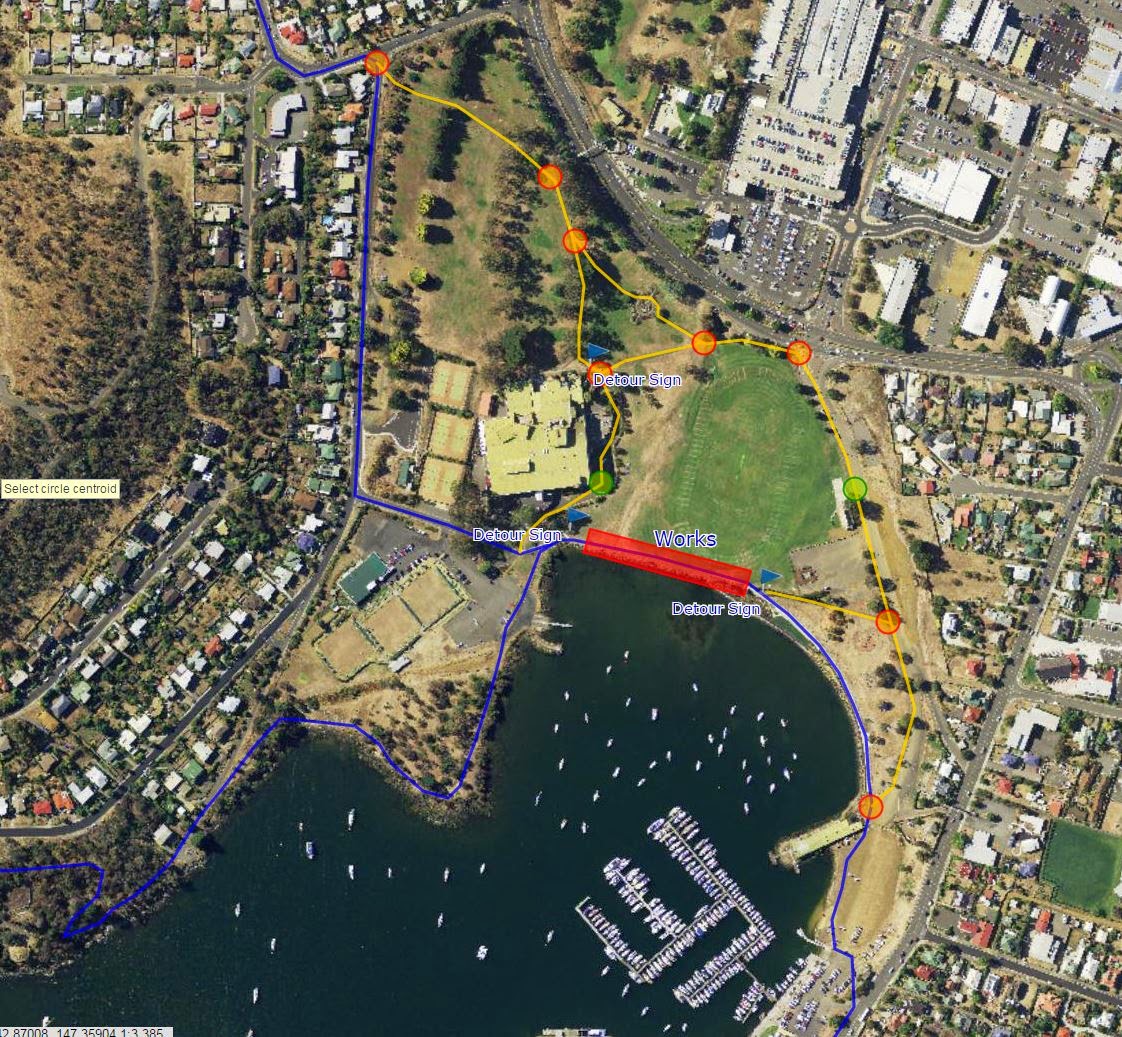 So, interpreting the above map for you, the blue lines are the what I’d describe as the usual bike routes people follow either into town or around the shoreline, and the red area is where the works are taking place.

The three blue flags you can (just) see on the map near the red works area are where they’ve erected “Detour” signs (I’ve helpfully written Detour Sign next to them).

The orange lines are the detours that people seem to be taking, and the red and orange circles are where (if I were doing this) I’d add further directional signs to help people find their way around (the green circles are where I’d put comfort signs assuring people they’re going the right way).

I know someone will say “but that would cost sooooo much“, but my response to that is they don’t need to be big expensive metal signs, just a small, simple, cheap sign would do at each of those points.  Heck a bit of spray paint on the ground would make me happy.

So how about it Mr or Mrs Councilman or whoever else is responsible for this … make my day and put up some extra signs.

PS. I was very pleased to see that the latest detour on the intercity cycleway are well signed, so kudos to whoever did that … 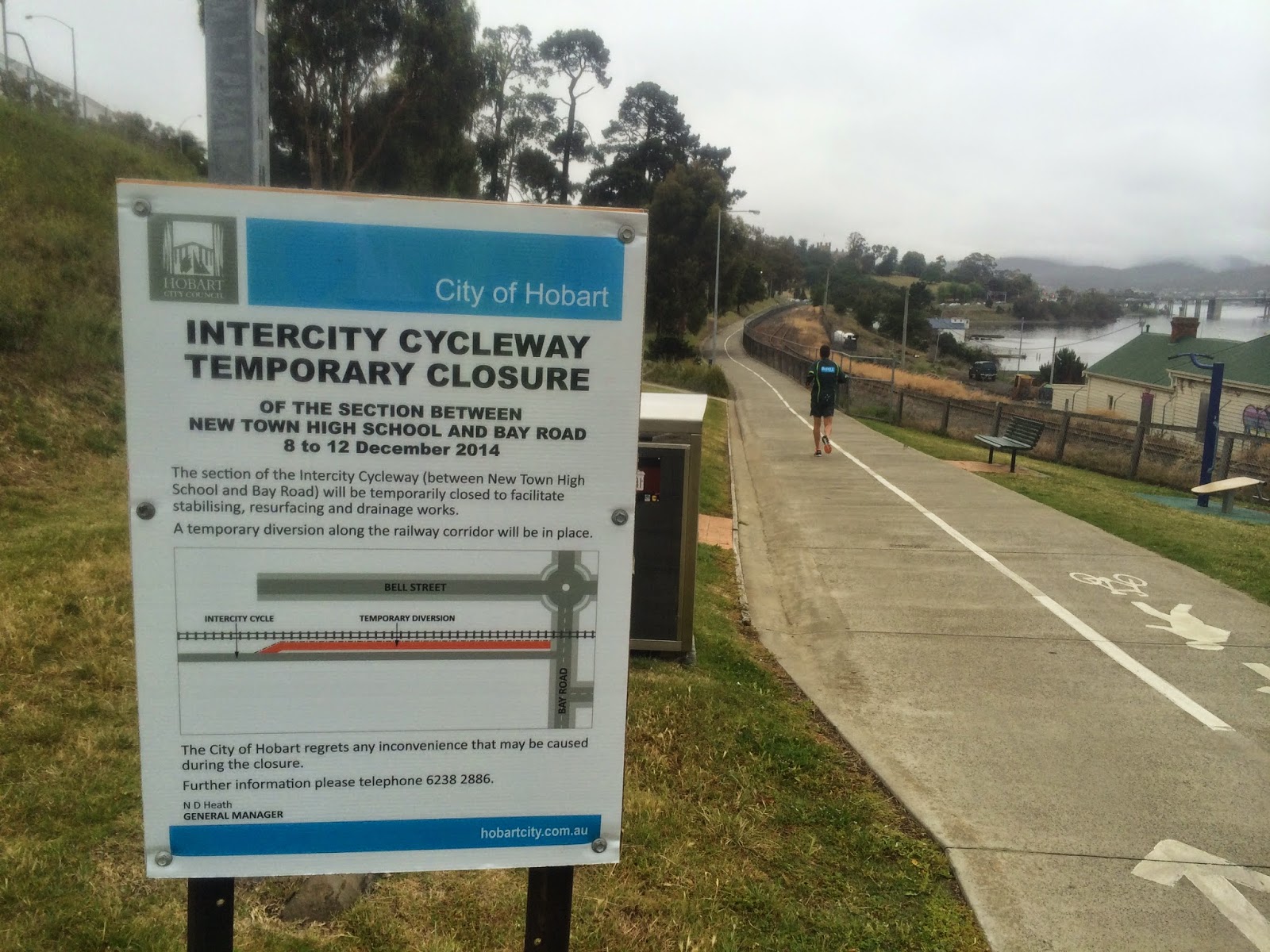