I have been drooling over fatbikes for years now … 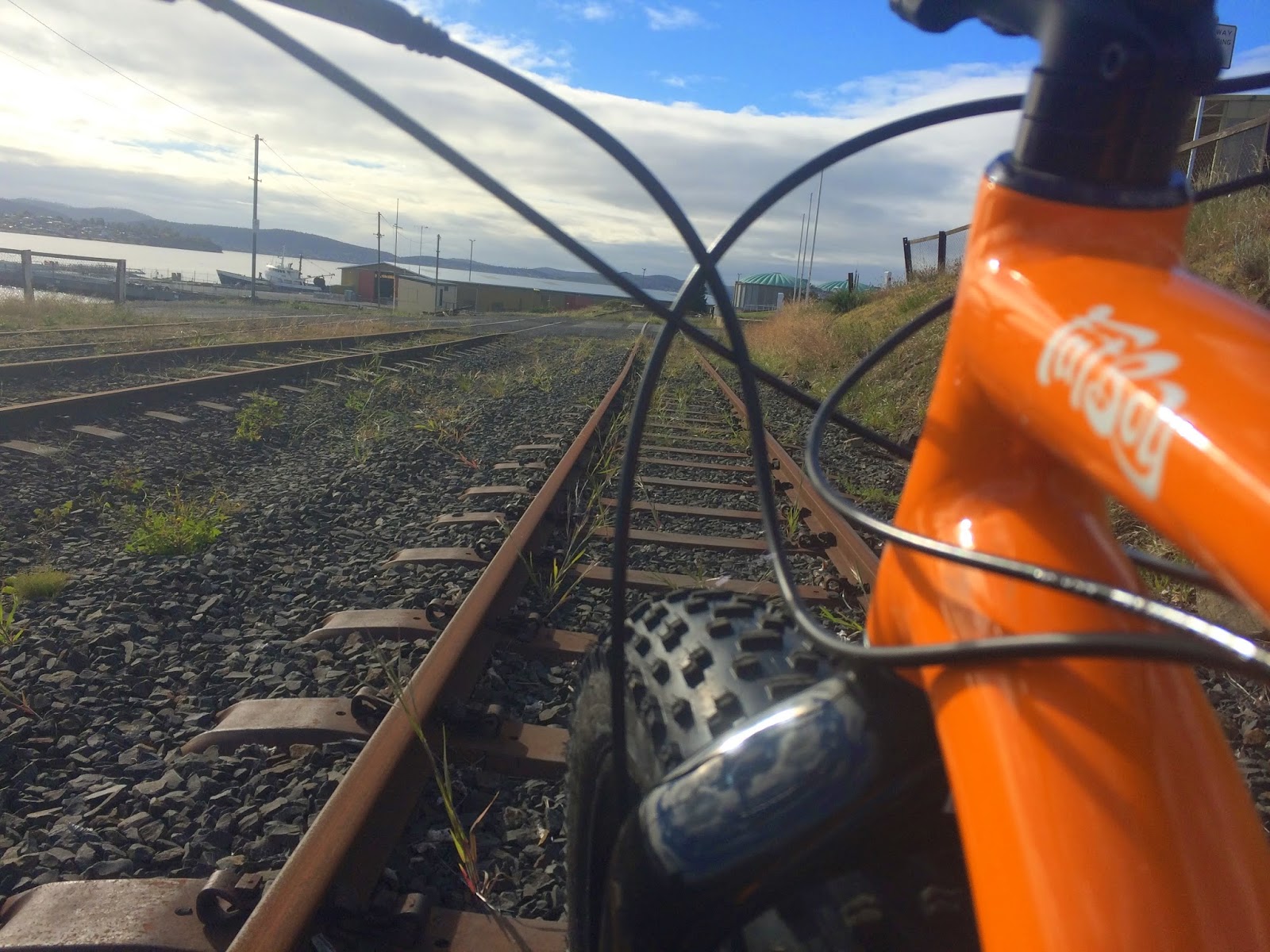 And just before someone else says it, I understand that for many riders fatbikes are just the latest ‘funny’ fad for bike shops to put outside their shops to lure customers in, but for me the idea of fatbikes is liberating … the idea of being able to ride across soft sand and snow (hey, I can dream it will snow again) or pass gently over unexplored areas … that’s my perfect world … a world where I can wander unbounded and think that maybe I’m riding where nobody has laid down tyre prints before.

Basically, I’ve wanted a fatbike before most people even knew they existed …

No, I’ll go one step further and say I probably wanted a fat bike before I even knew that fat bikes existed.

So you can imagine how excited I was on Saturday when I picked up the demo Specialized Fatboy from Bike Ride Hobart for a weekend trial.

Actually, you probably can’t even begin to imagine it, because you have no idea of the plans I had for this bike for the weekend:  montage time … 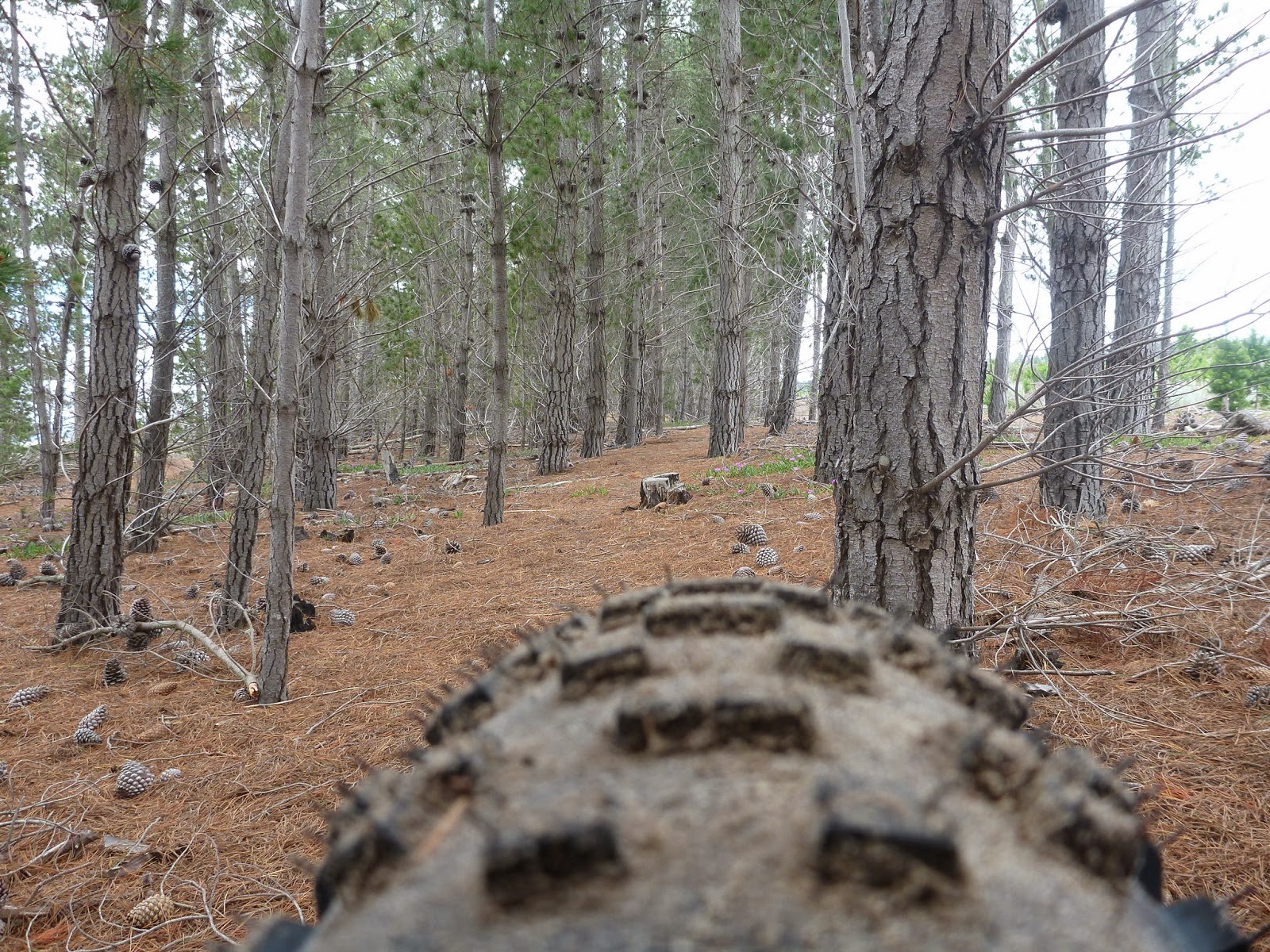 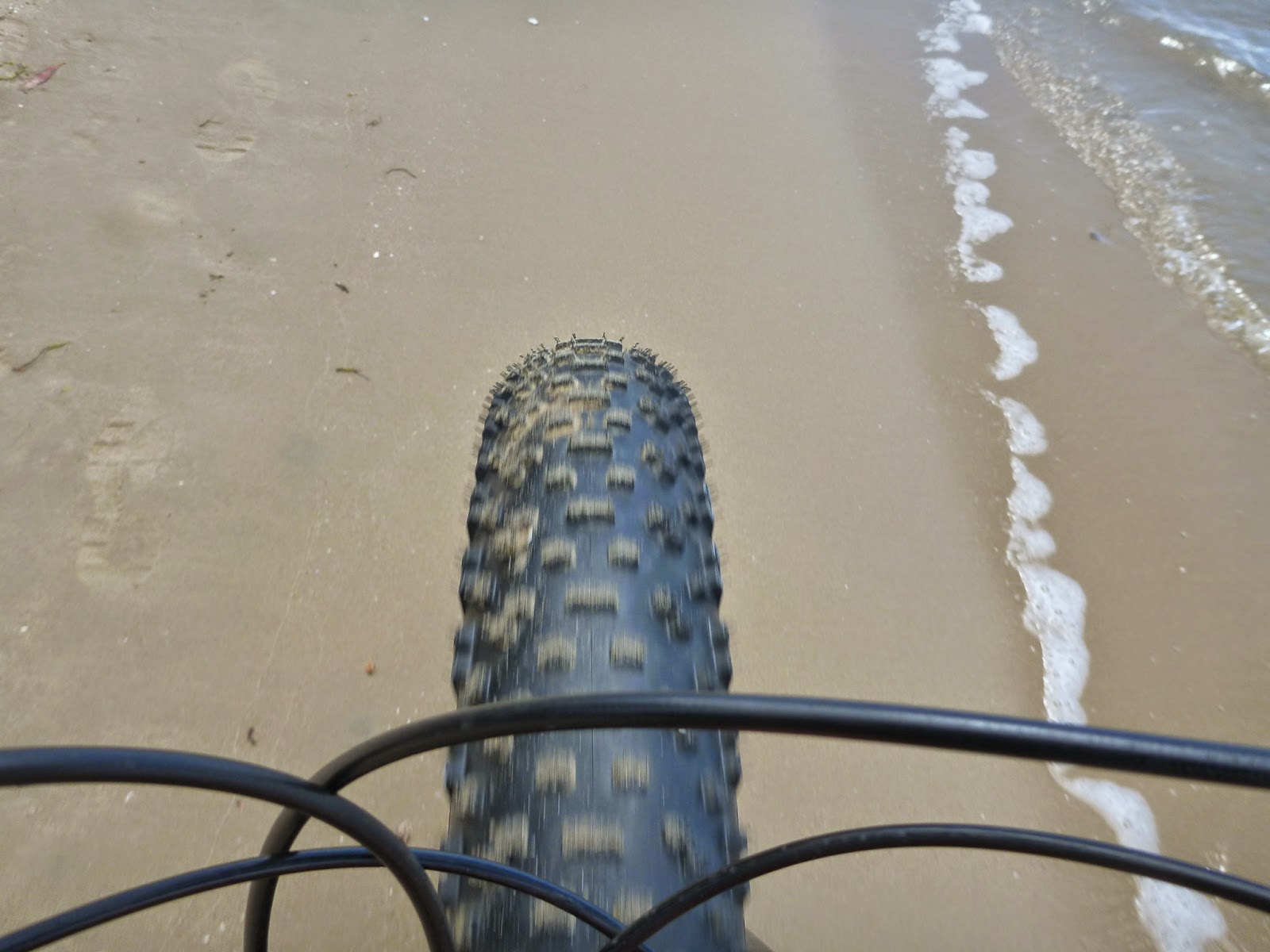 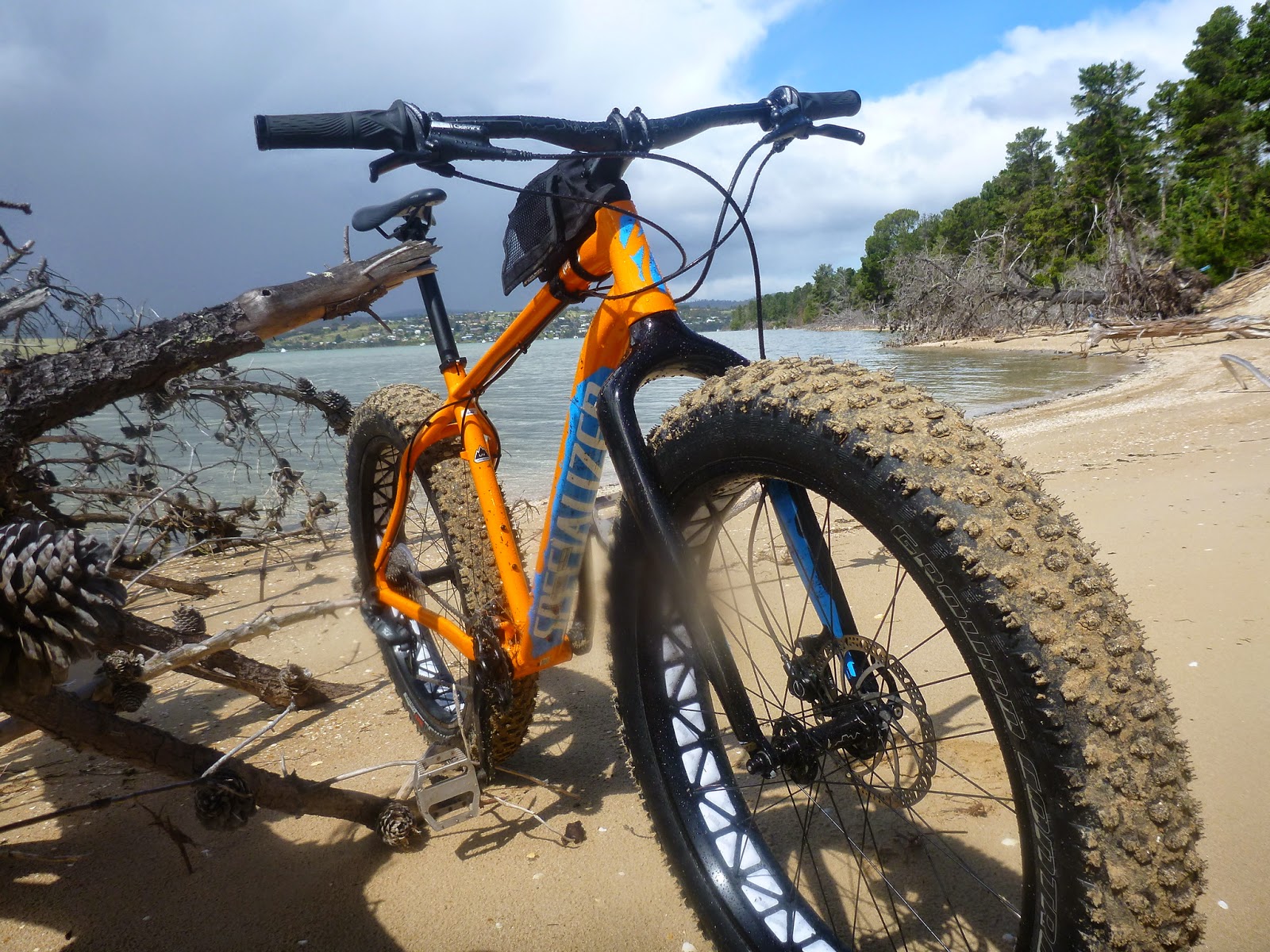 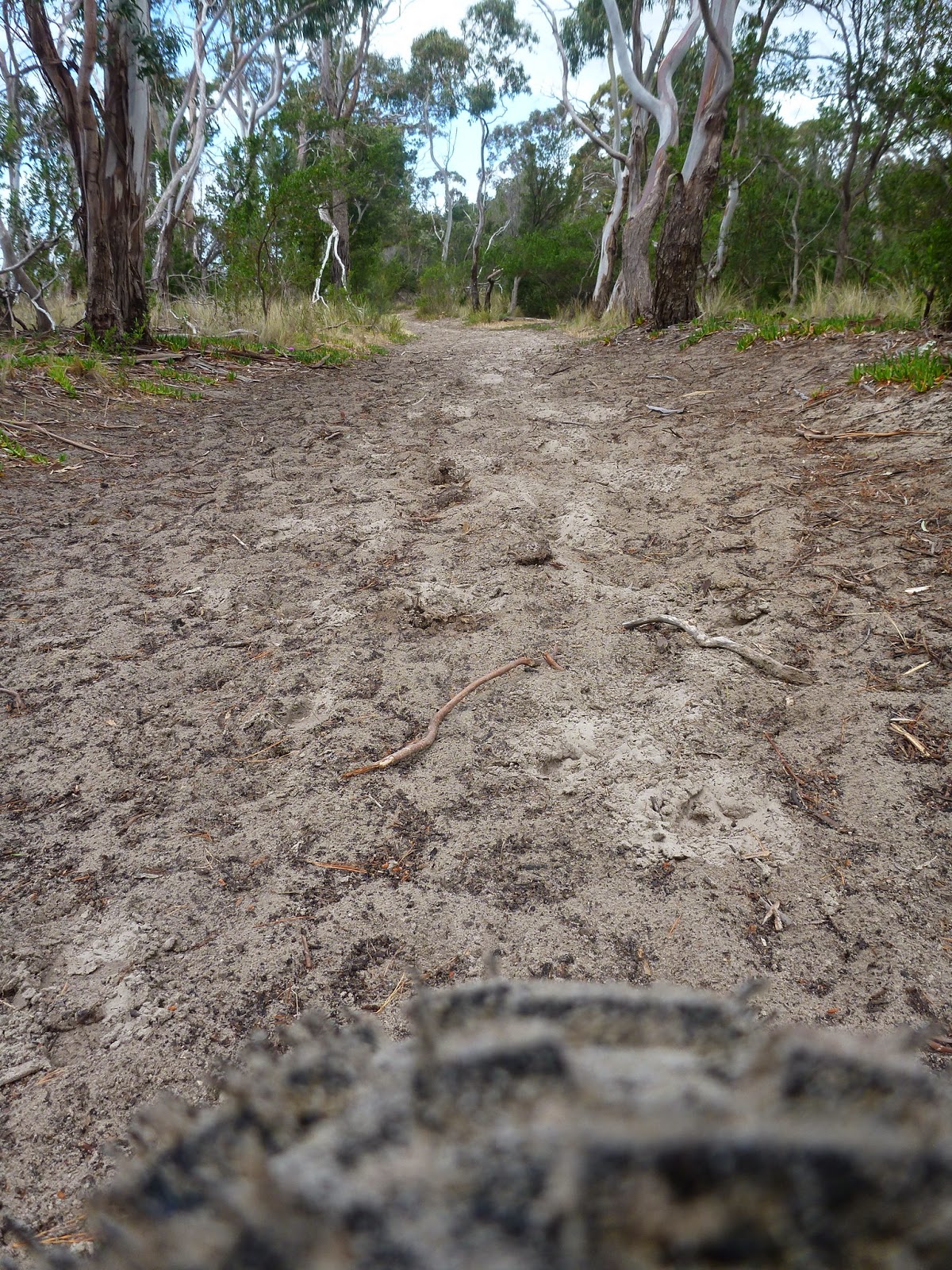 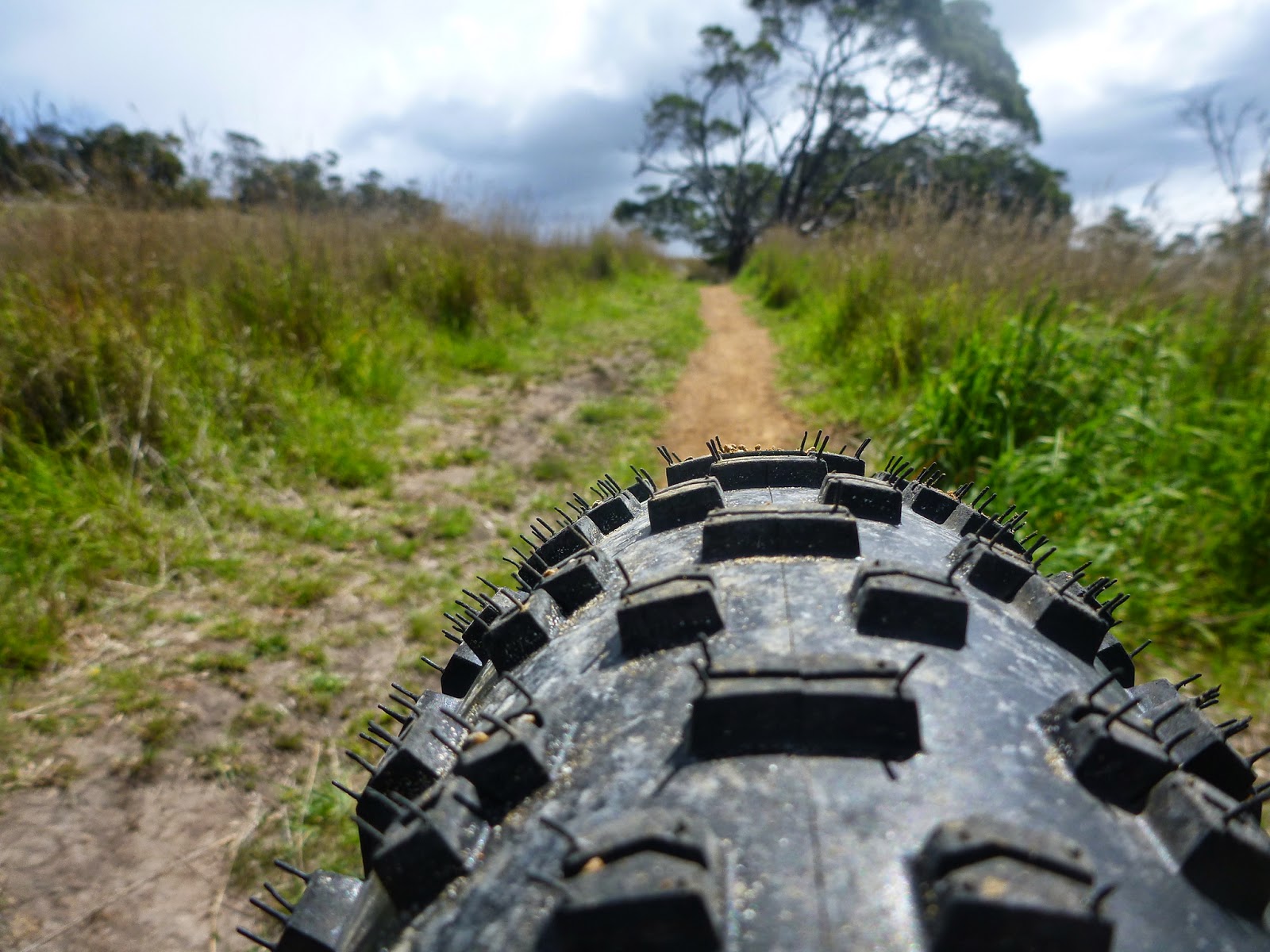 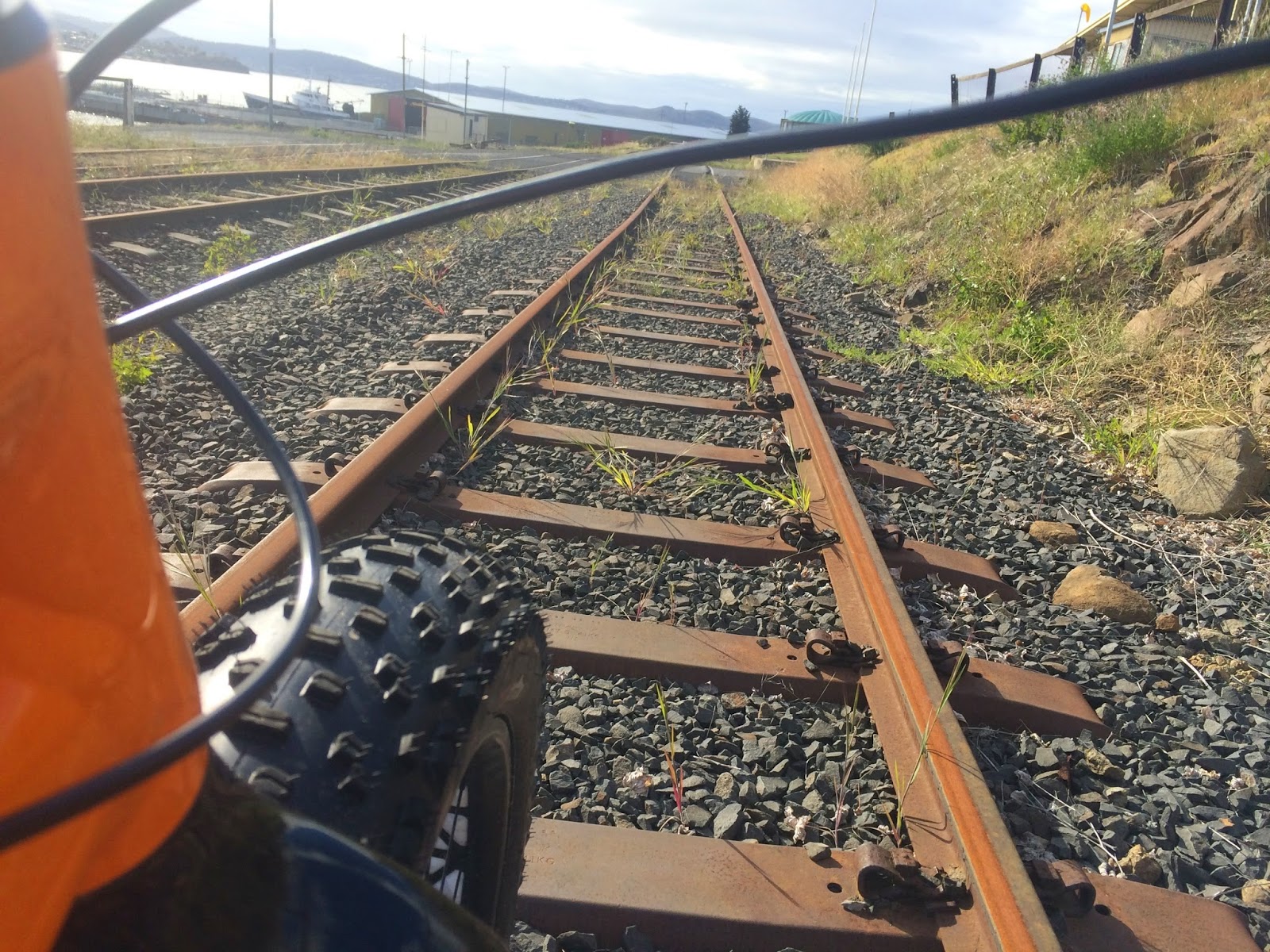 Yep, we (me and my fatbike are already a “we”) were going to ride the sandy trails between seven and five mile beaches, we were going to be the first mountain bike that the Meehan Monster ran from, and we were even, if time allowed, going to have a brief scoot along the old Derwent train line to see how ‘fat’ handles abandoned rail-lines.

So you can imagine how utterly devasted I was when, just 6kms into my first ride, I headed up into some soft sand on seven mile beach and the chain came off and wedged so tightly between the spokes and the cassette that nothing, and I mean nothing, I did would dislodge it.

After 15 minutes of pushing and pulling and twisting and levering, the only thing I managed to do was entertain a passing duck that came up to say hello … 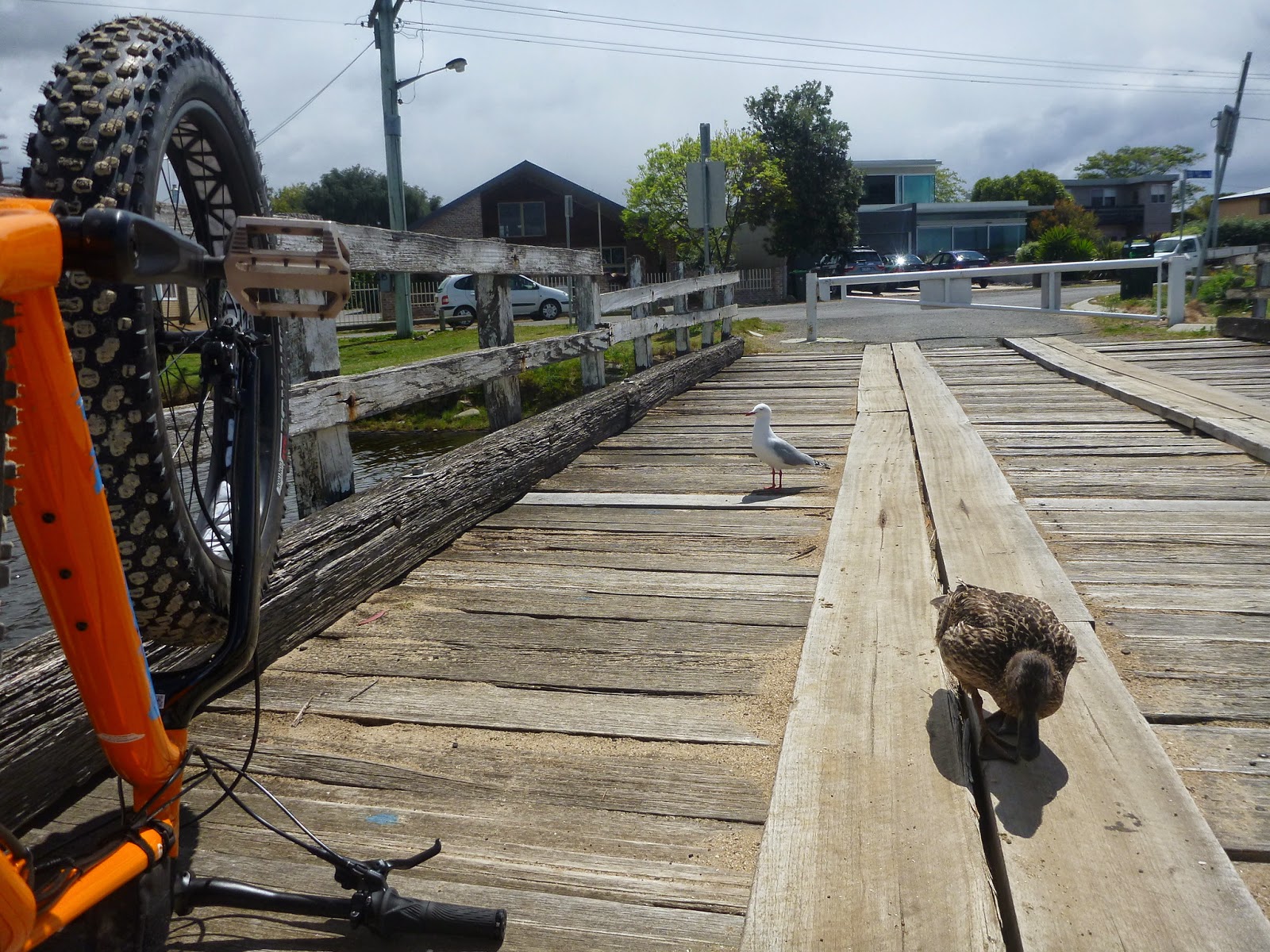 My riding day was over before it even began and my real problem was that Kim couldn’t get to me for hours, I didn’t know anyone else nearby who could come and get me, and as the chain was lodged in the wheel I couldn’t even push the bike back home because the wheel was locked up.

The way I saw it, my only option was to try and carry it all the way home (it was, fortunately, amazing light) and feeling rather depressed I set off down the road, bike over my shoulder, trying to do just this.

A hundred metres later, already scratched and bleeding from pedal catches, I had to concede that there was no way I was going to be able to do this for 10 more kilometres.  I needed a plan B.

Fortunately, as I was staring out over Seven Mile Beach deciding what this plan B might be, I was saved by a good Samaritan in the form of Guy from Genesis Gym who pulled over and gave me (and the fatbike) a lift home.

Back home, I was able to quickly remove the rear cassette (it’s amazing what having the right tools can do) and release the chain, which meant that night (as we had not two, but four monsters staying with us) we all went back down to the beach and had a play on the bike …

Albeit that some of the kids were less successful than others …

I took the opportunity to test it on the dry sand and I was amazed at how easily and stably it turned.  It’s amazing what 4.6 inch tyres can do – my normal bike would have felt like it was on marbles, if I could have ridden it there at all.

Unfortunately (or maybe just proving it never occurred) there were no witnesses to this great feat of riding because someone has said the word “pizza” and so all four monsters and two dogs were running down the beach in the opposite direction to get fed.

Sunday dawned wet, windy and cold, but finally around 2pm and with only hours left with my beautiful fatbike, I knew I had to at least get it out into some real soft sand … cue five mile beach. 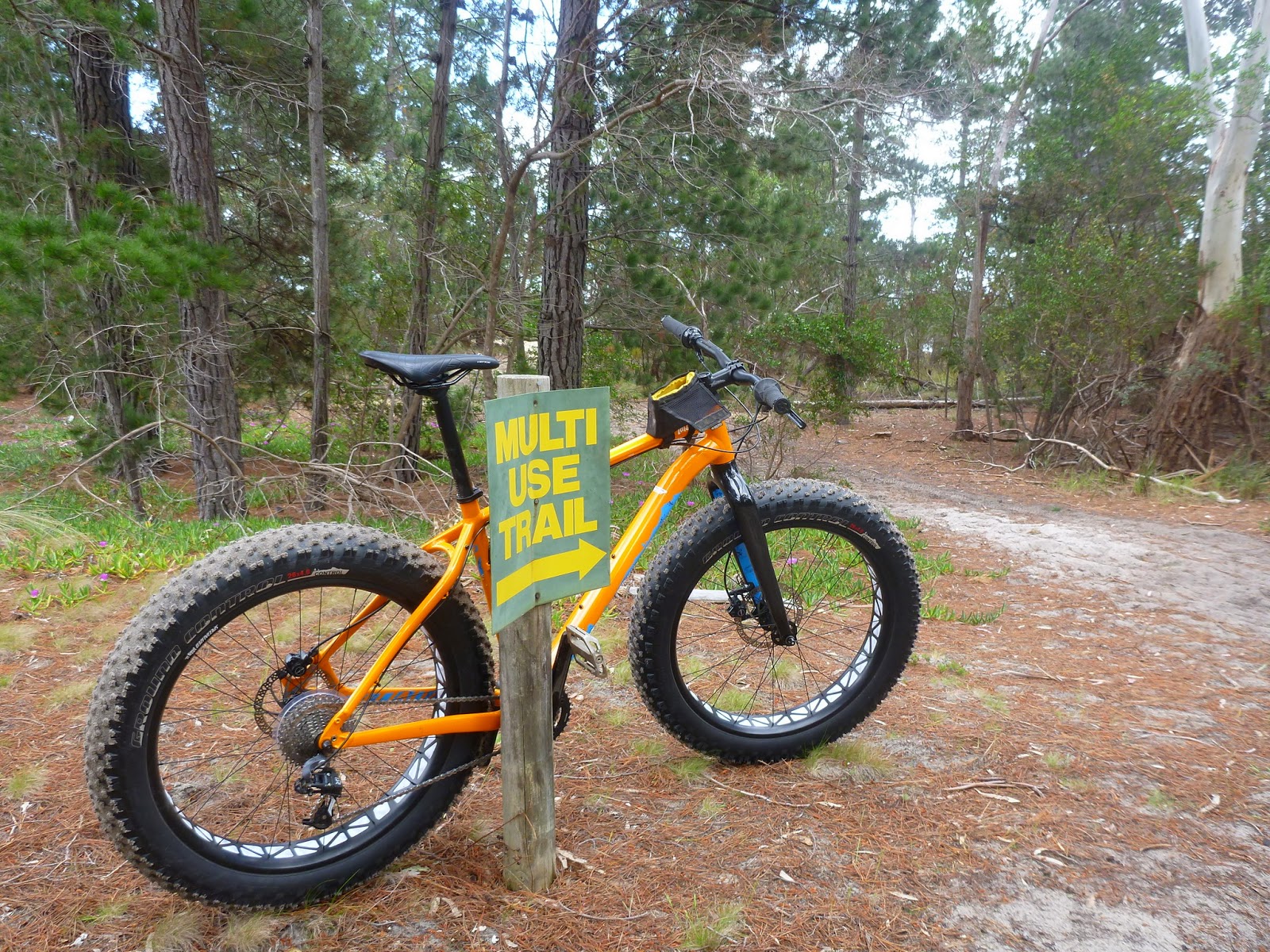 If you’ve been down to the Seven Mile Beach Protected Area (it’s a Public Reserve soon to be a golf course) then you’ll understand why I think it’s the perfect place to try a fat bike.  Whilst not the most scenic place in the world, it has a network of roads and multi-use trails used mainly by walkers and horse-riders that are basically just soft sand … 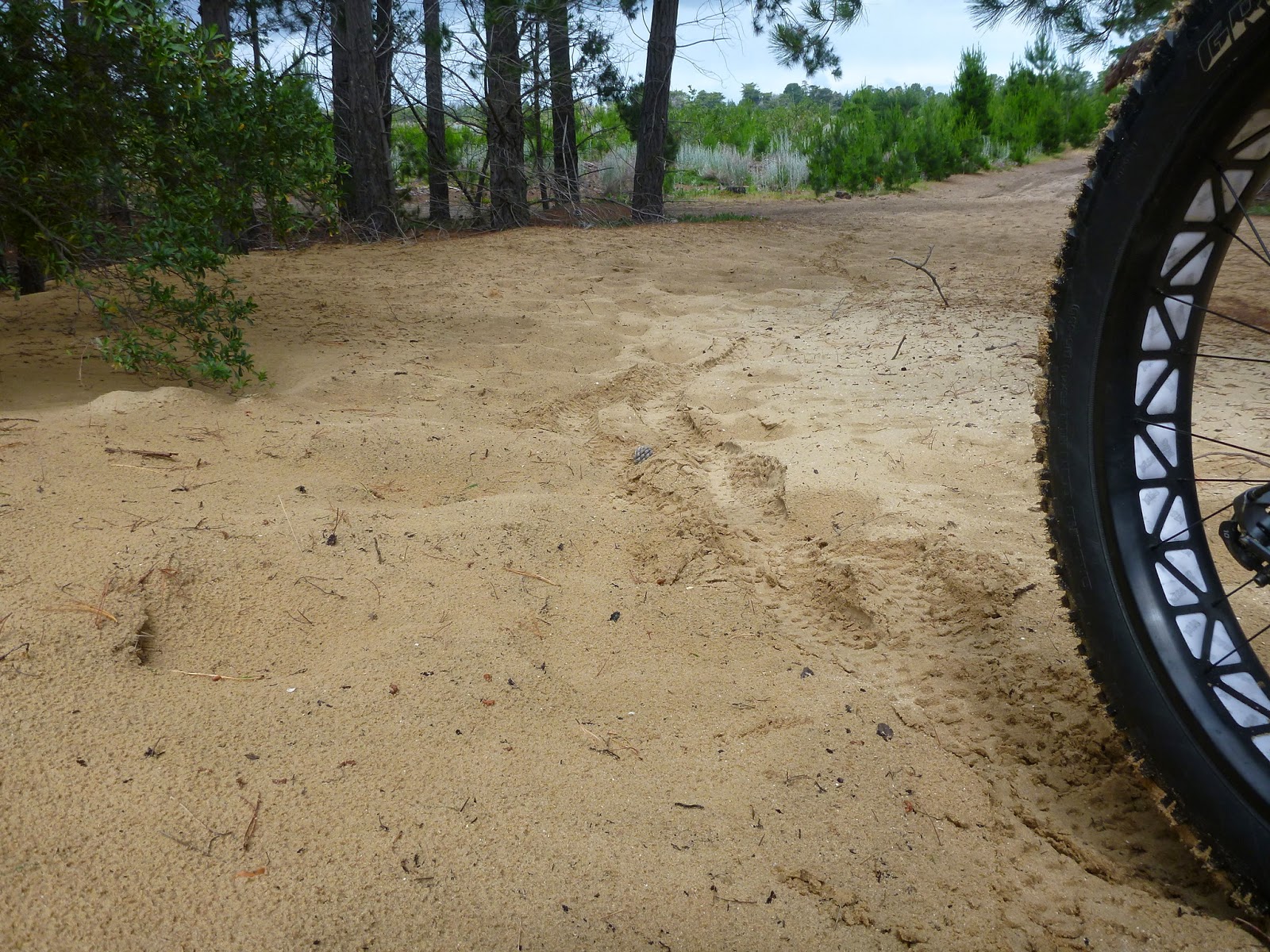 I ended up spending over two hours just following my nose around the peninsula and out to Sandy Point (there is unfortunately for the environment, but fortunately for my purposes, what look like a whole lot of illegal four wheel drive trails through the dune territory out there) and after Saturday’s disappointment, today was just joy, joy, joy … albeit hard earned joy. 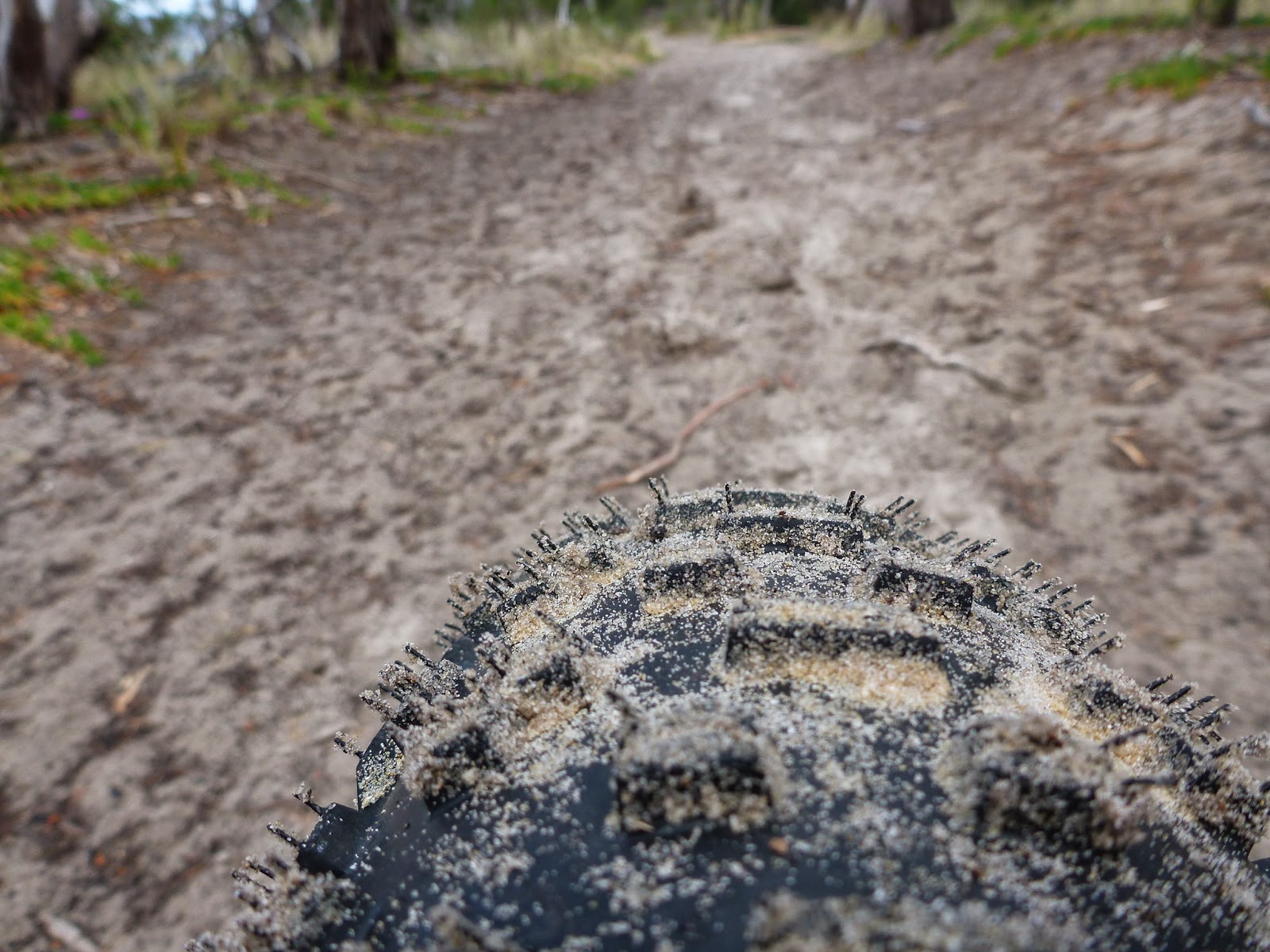 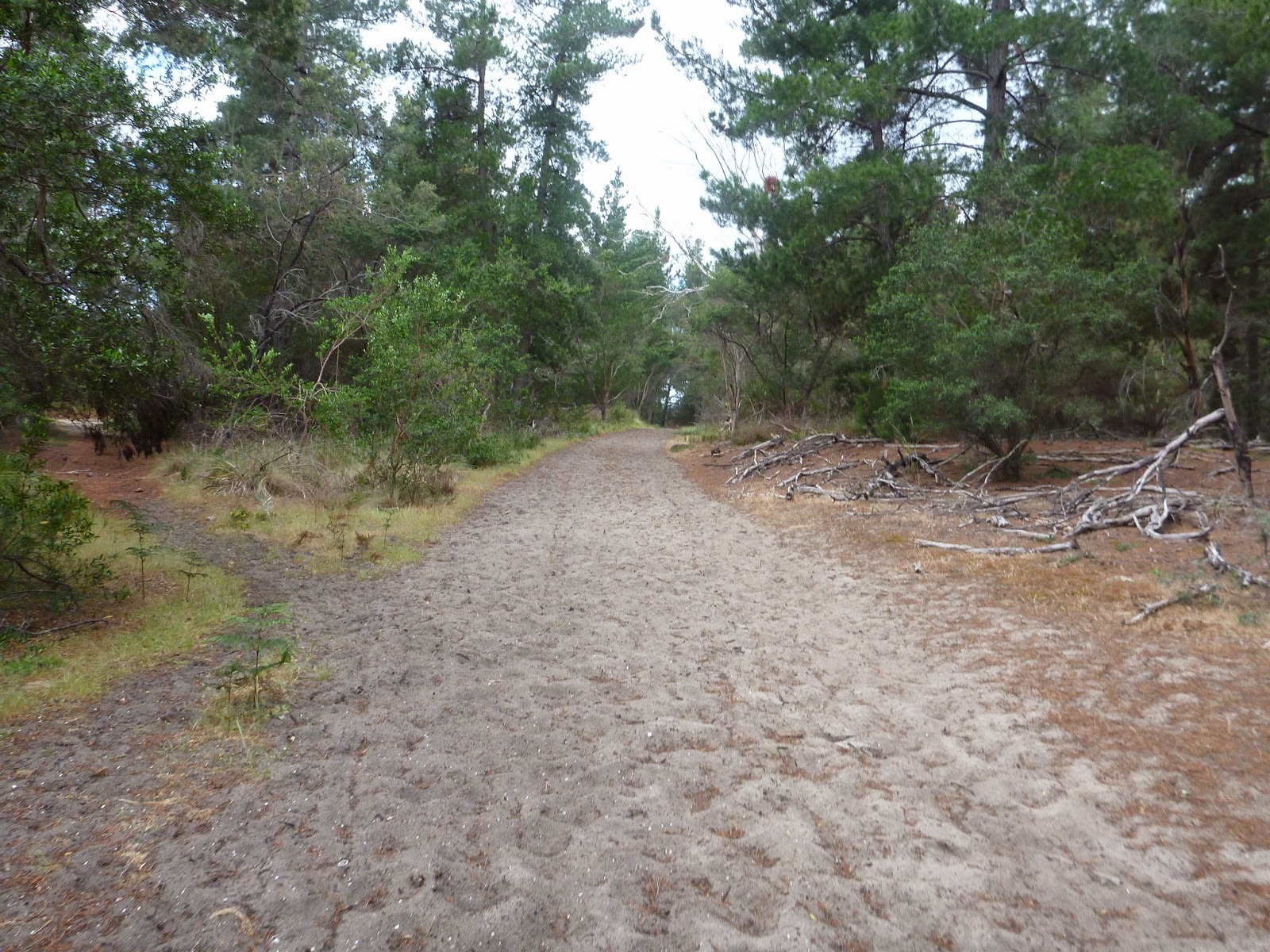 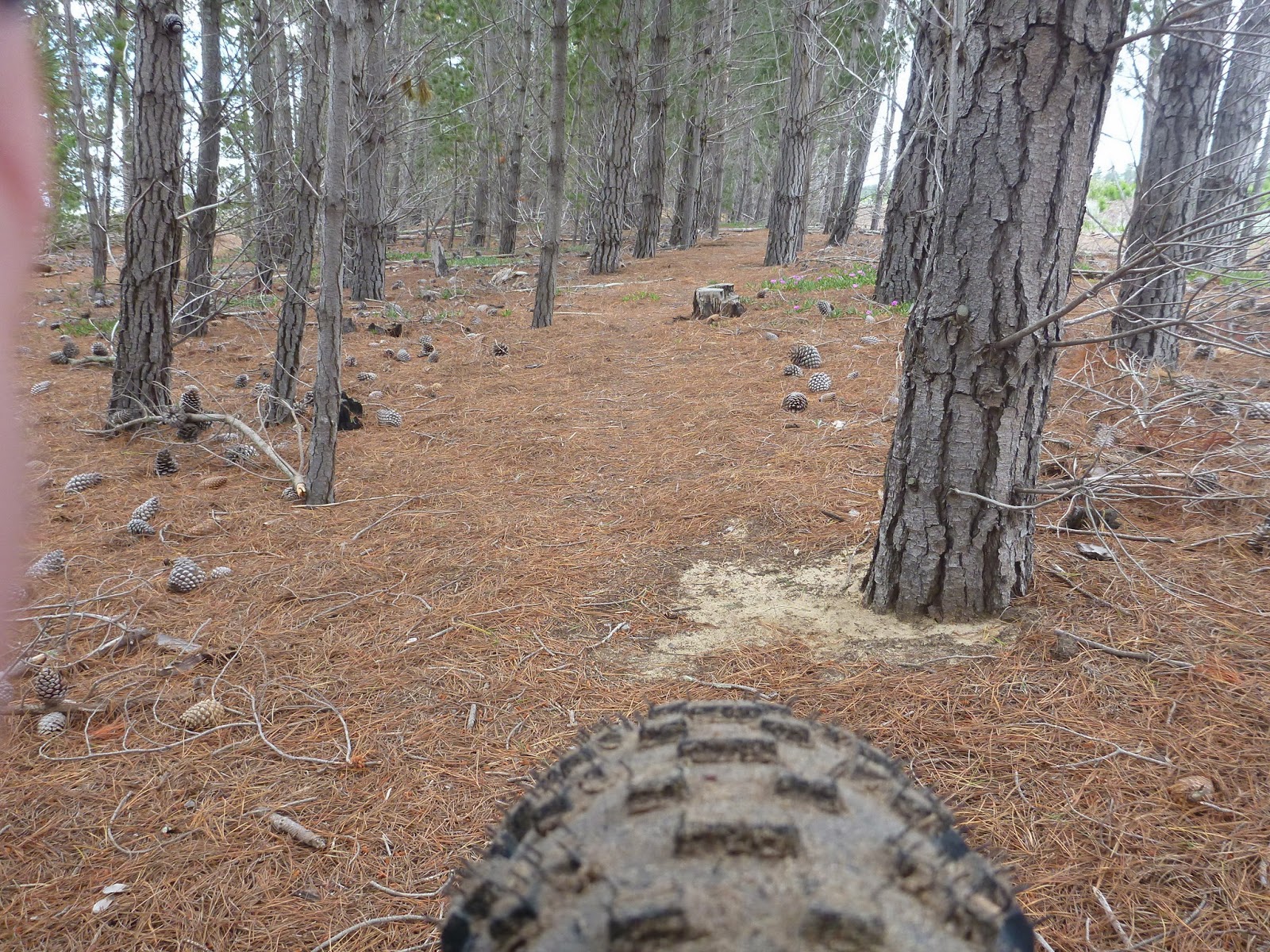 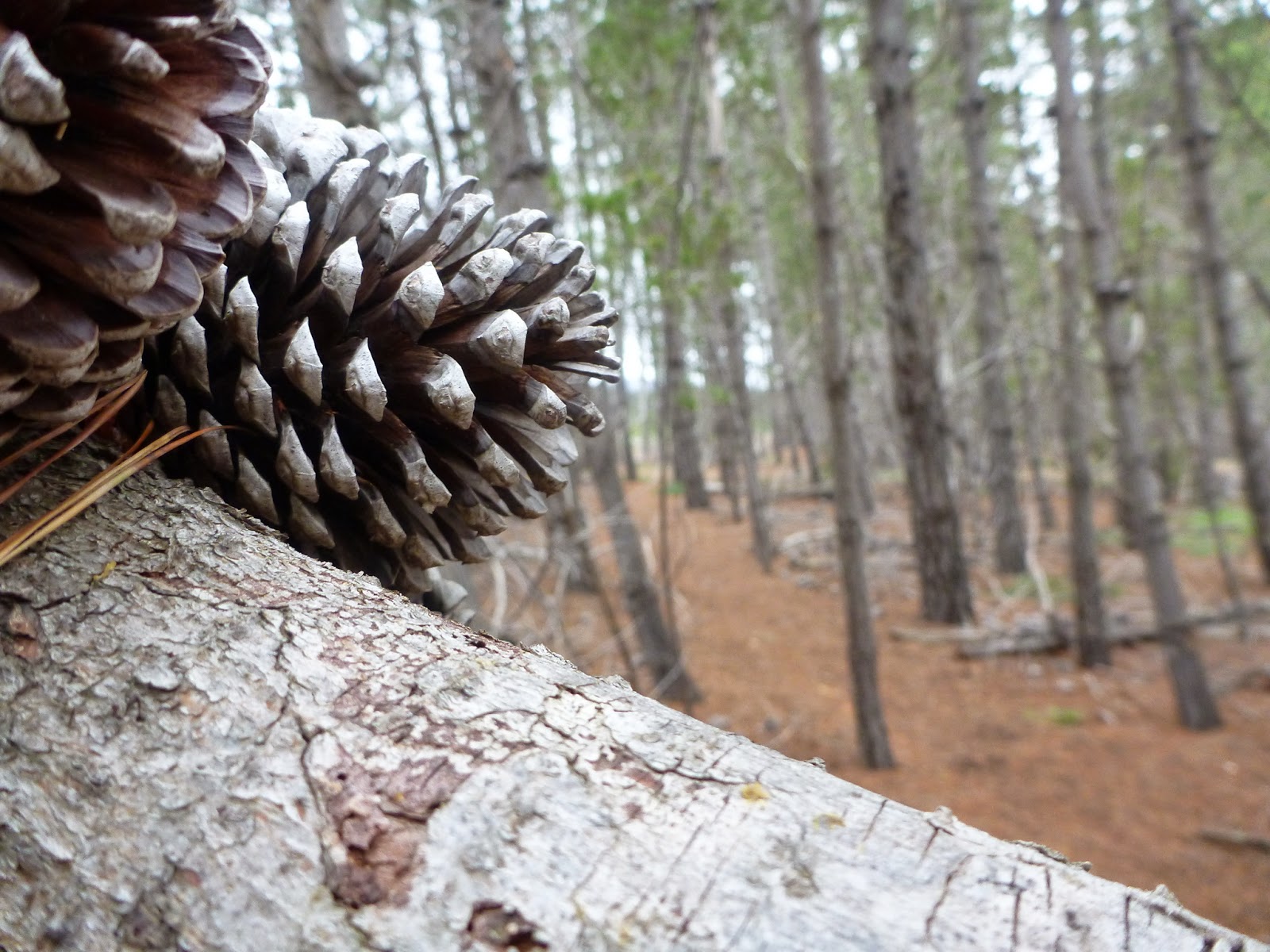 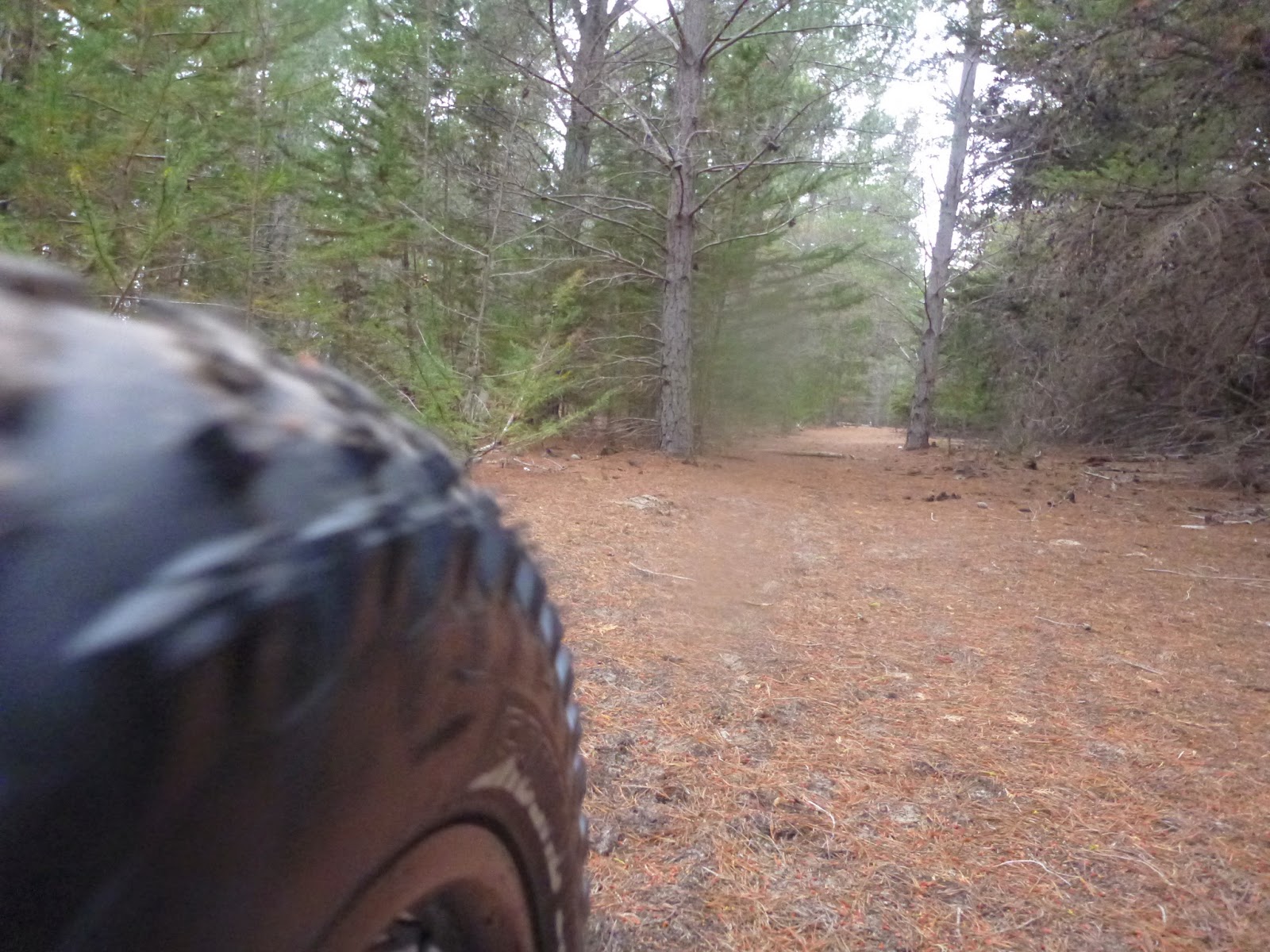 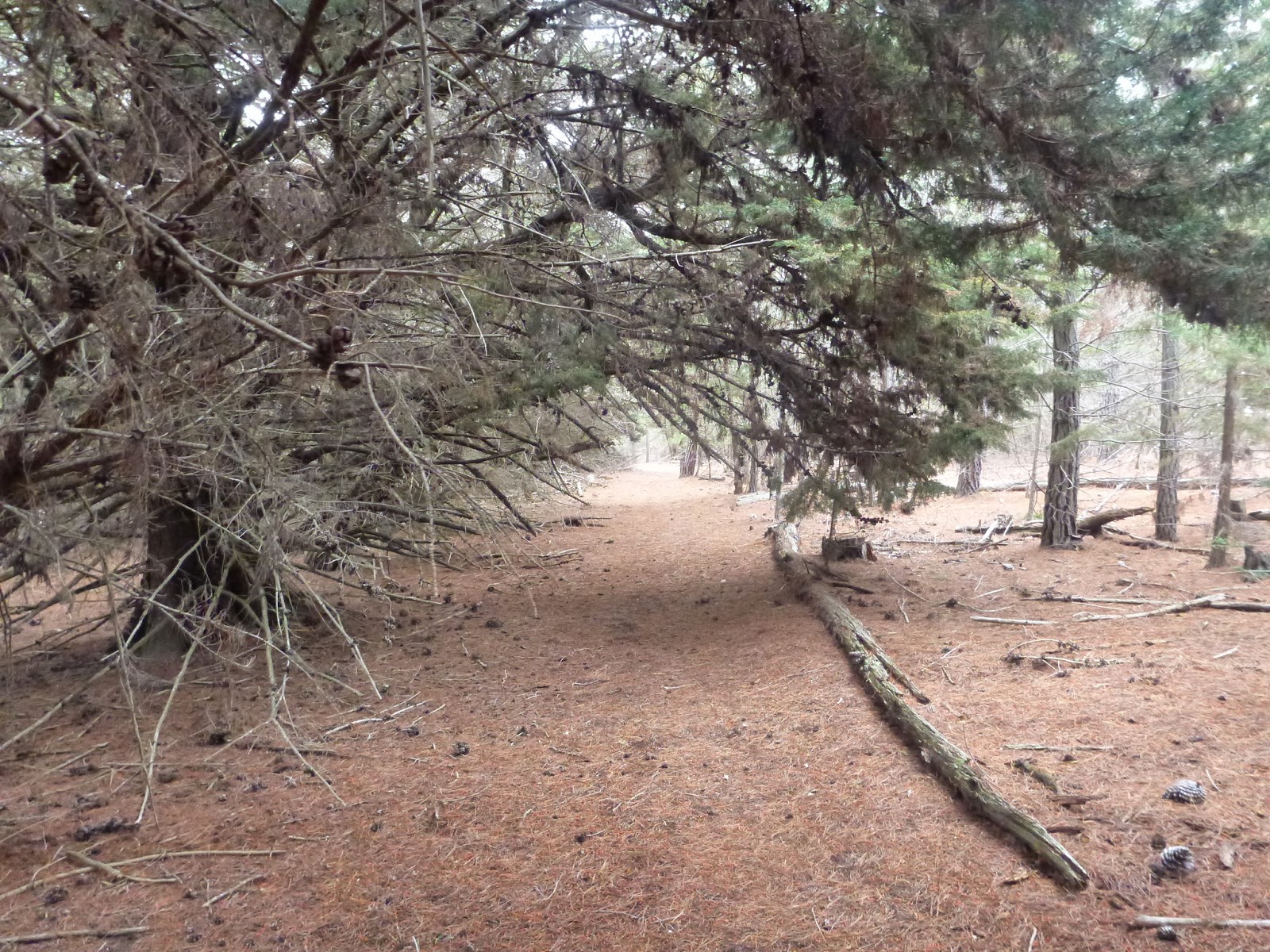 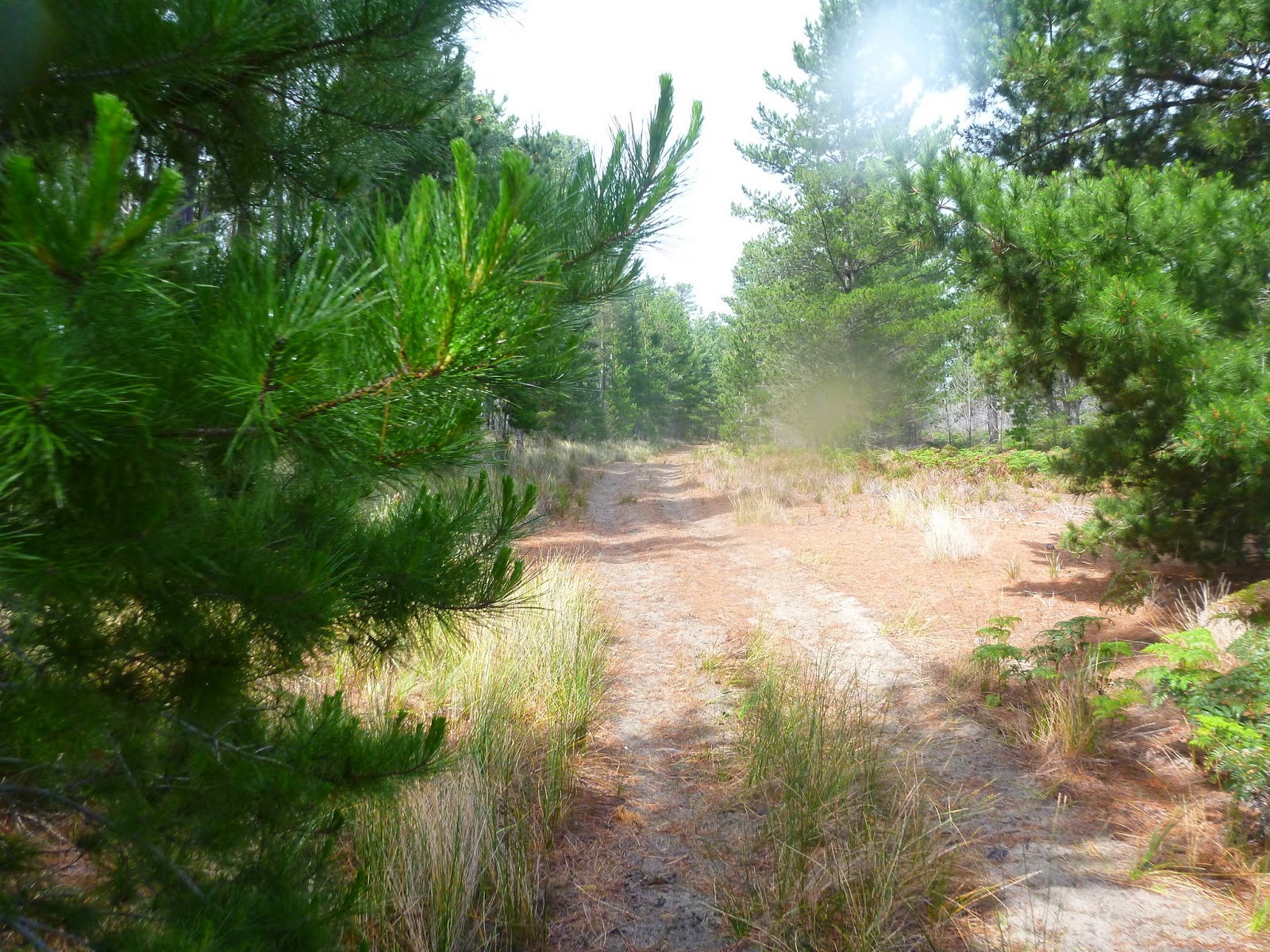 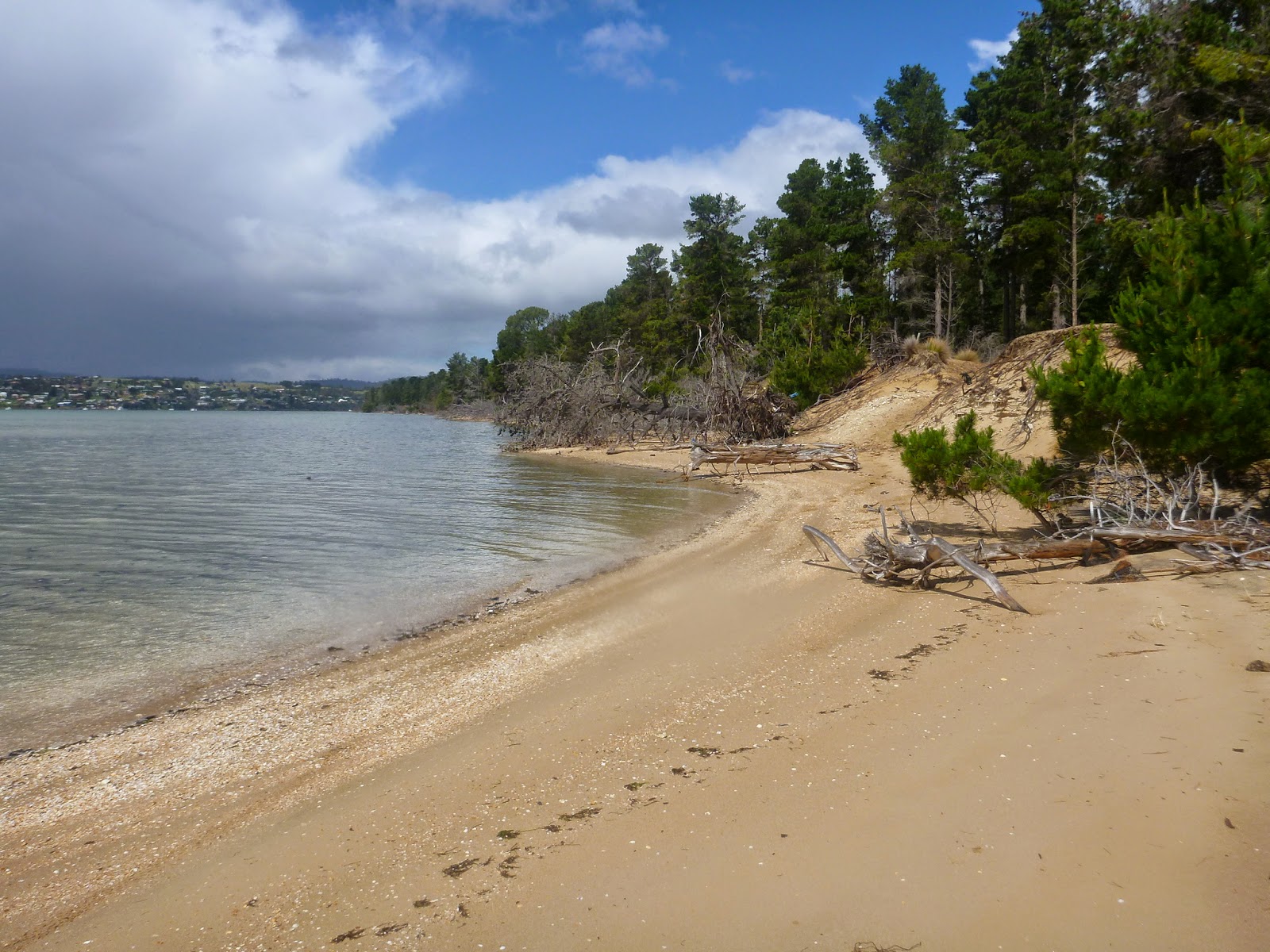 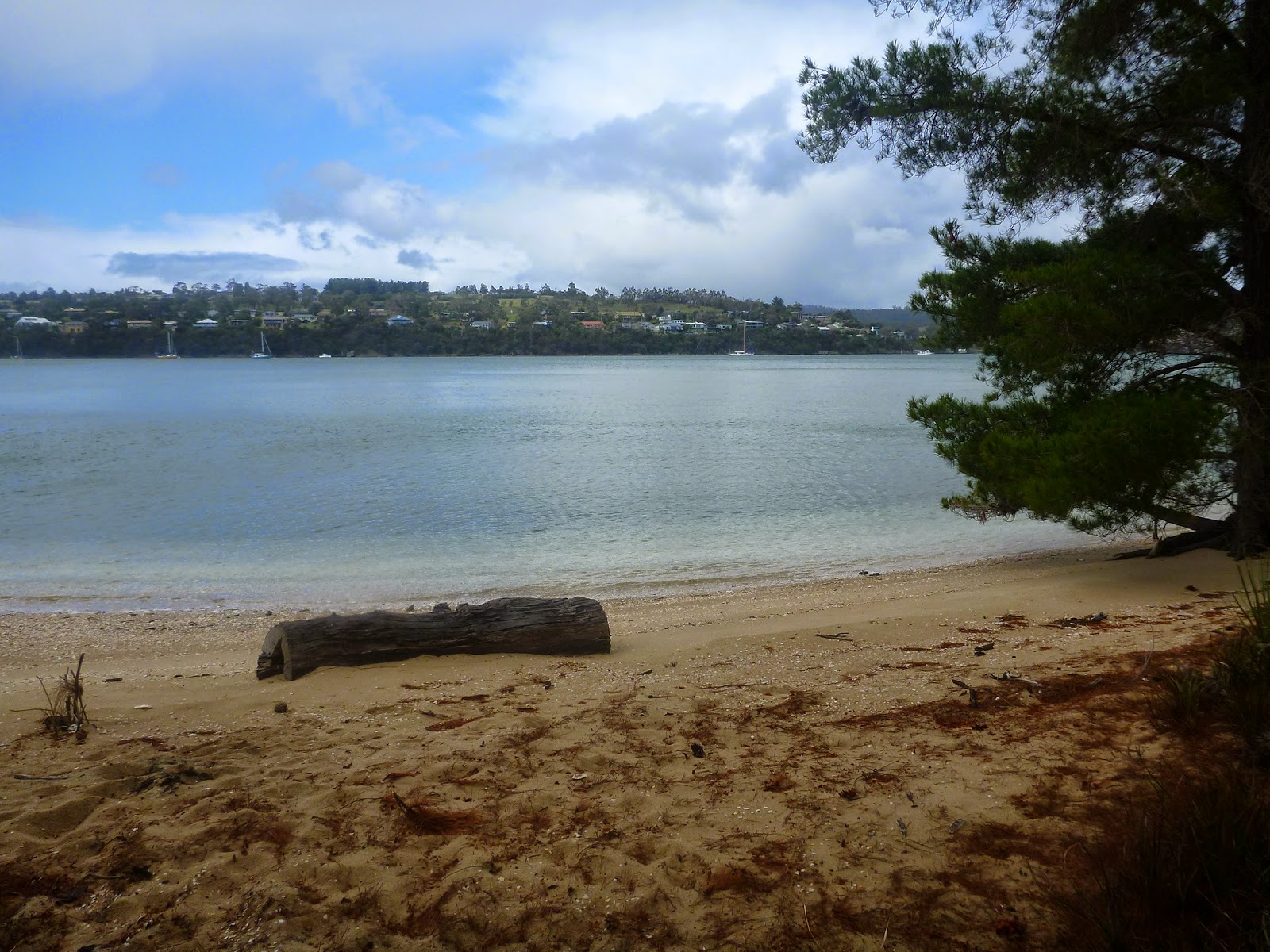 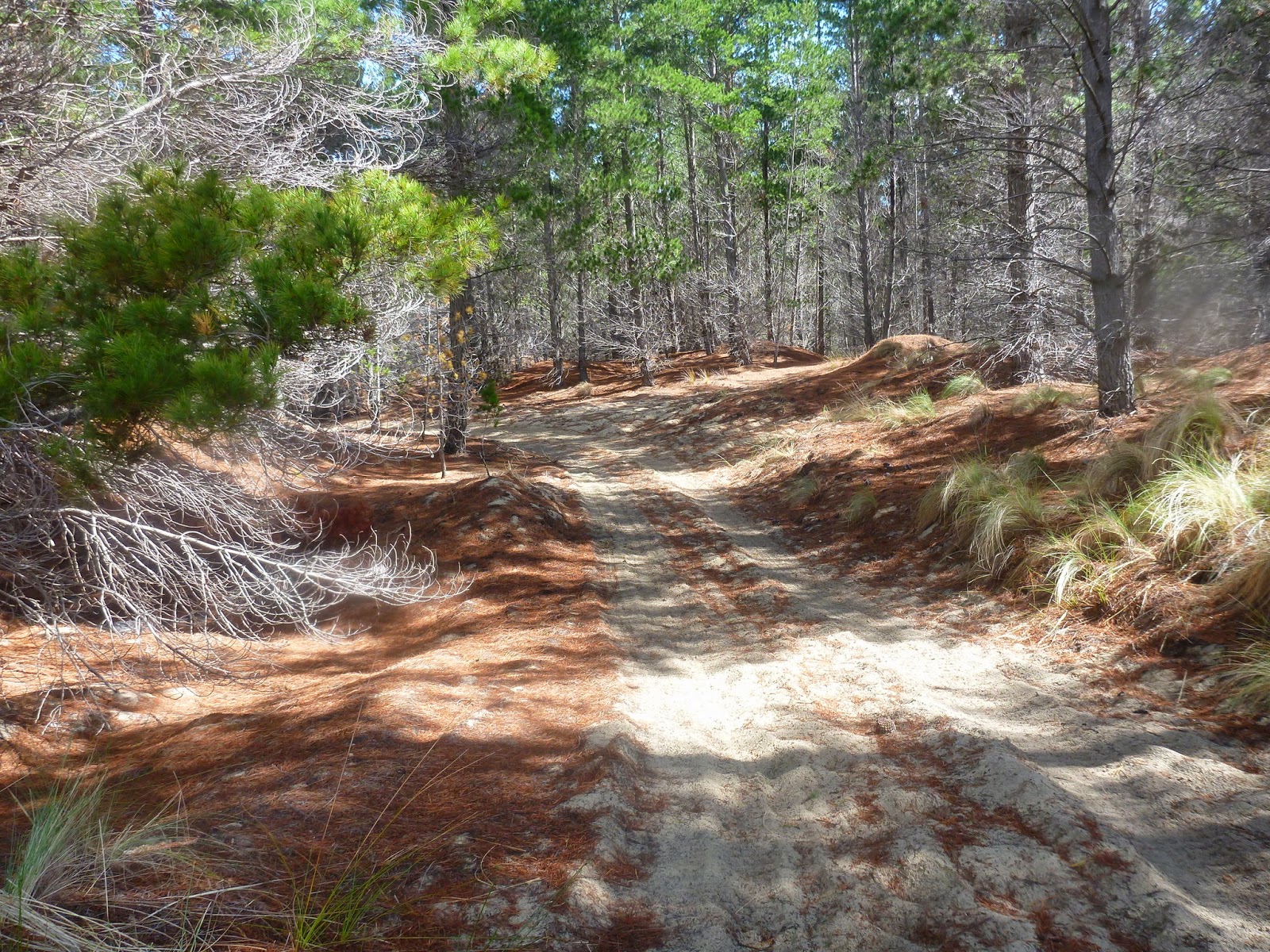 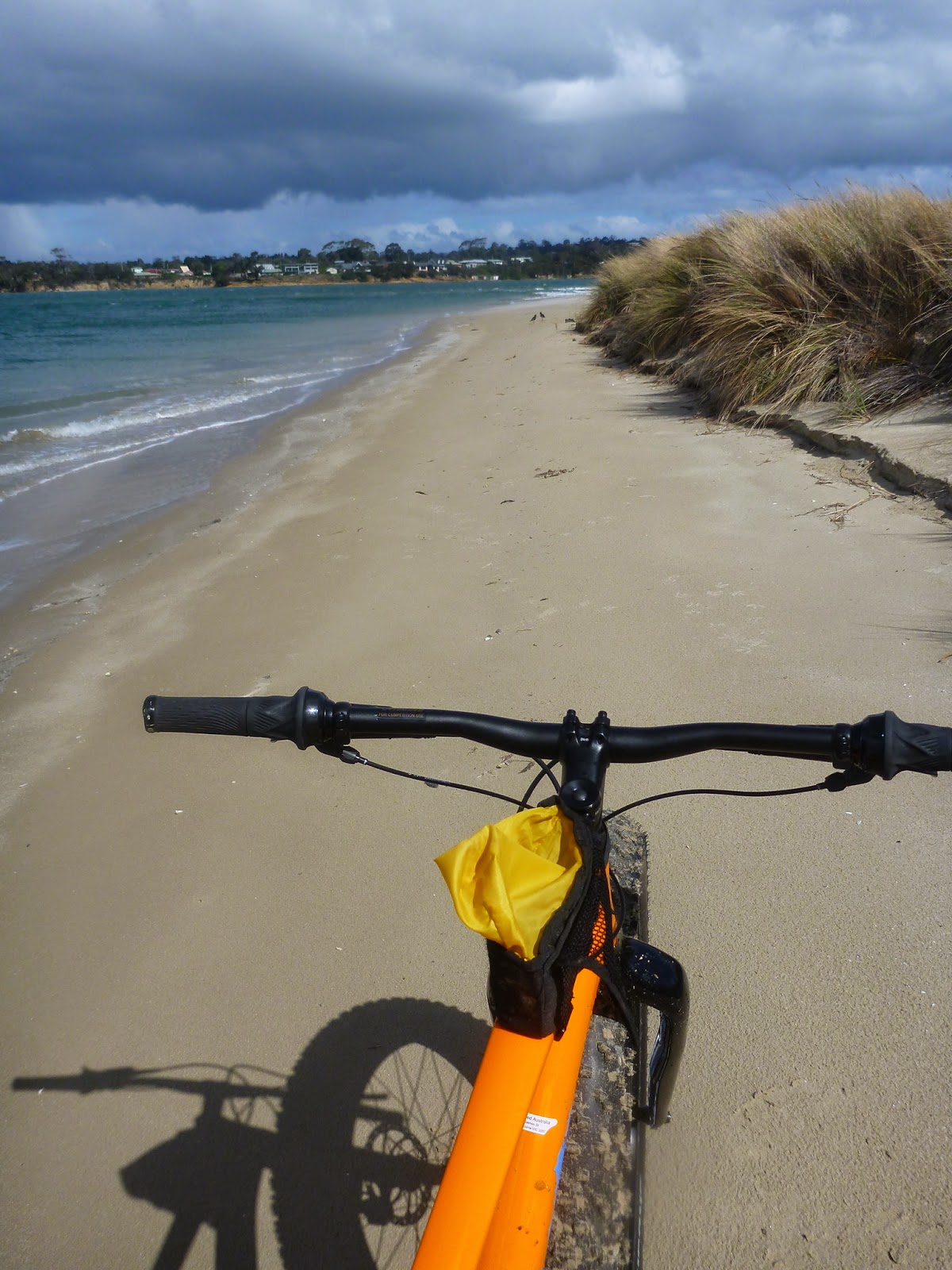 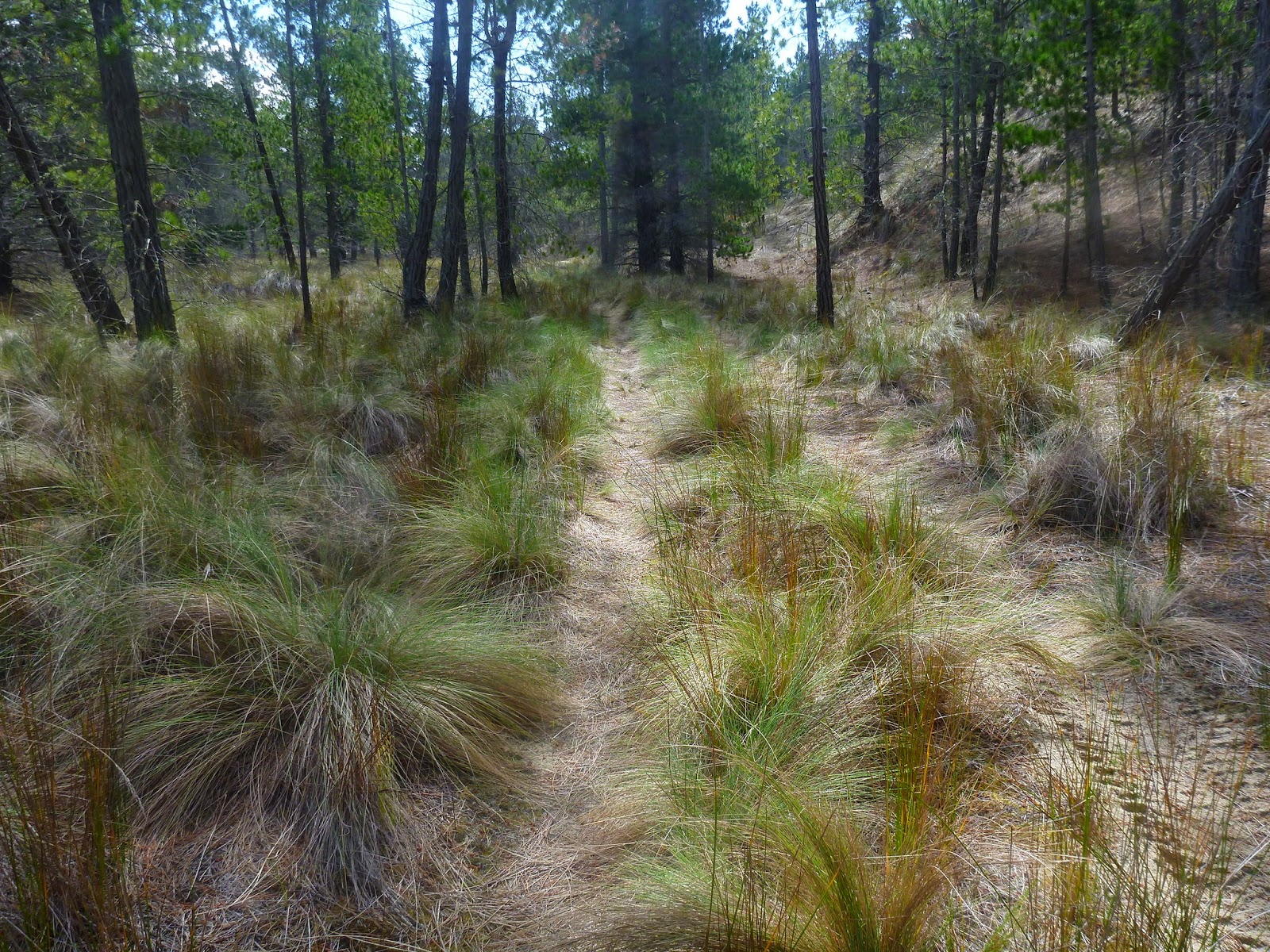 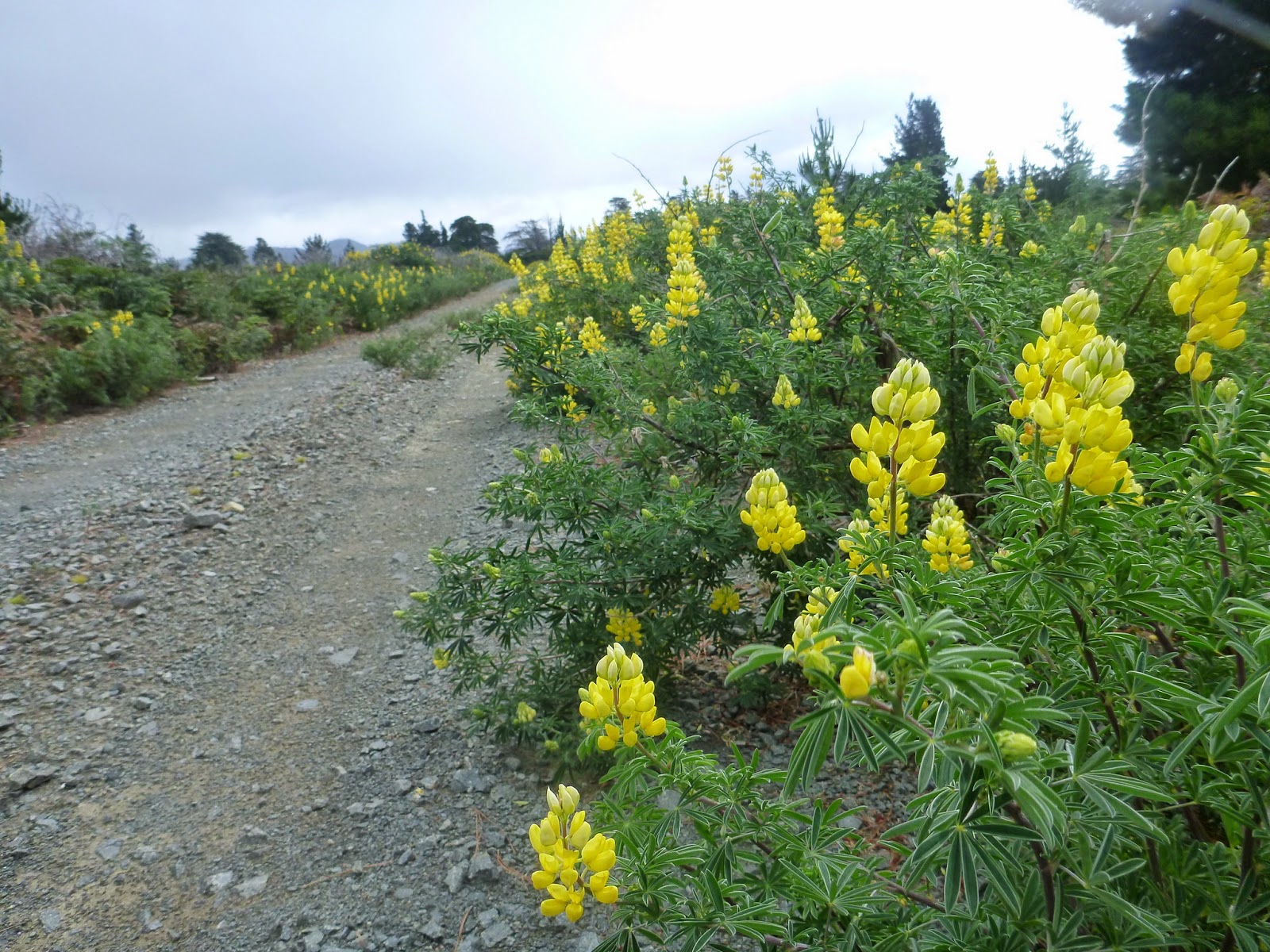 Whilst Fatbikes don’t turn soft sand into highways, they are a revelation in terms of where they will take you.  It is still relatively hard work and I only averaged 8.2kms an hour which is really slow even for me.  Fatbiking on soft sand felt like riding slightly up hill all the time, but with that said most of what I was riding today I wouldn’t even have attempted on my normal 2.4 inch tyres.

Fatbikes take you further, but they don’t take you everywhere.  I still couldn’t ride it up one or two of the steepest pinches, and you do sacrifice a lot of top end speed out on the harder gravel roads (unless you’re prepared to stop and spend 10 minutes putting more air in the tyres).

But in their environment, they’re amazing.

I also really wanted to see if they could handle rail, but other than a sneaky little foray down the train tracks at the Cenataph on my way to returning the bike on Monday …

.. I didn’t really get to test the bike on railtracks, nor did I get to go and chase down the Monster.

I did however form some opinions on fatbikes (and this bike in particular).

I think the promise of fatbiking could meet my expectations.  My only real concern on saying that is this bike had super-wide 4.6 inch wide tyres whereas I would prefer something in the 3 to 4 inch range and I don’t know how much of the benefit I would lose from these narrower tyres.  I also don’t know if I can put narrower tyres on this bike.

I loved many aspects of this bike – I loved the geometry, and the weight (lack of) was outstanding, but there were also bits I didn’t like – it has grip shifts (which I actually love) but there’s no indicator on them as to what gear you’re in and as the gears on the demo bike I had were jumping all over the place, I found this particularly annoying.  The handlebars also seemed wider than I’m used to, and although the carbon forks were great for weight reduction, if I wanted to put some racks on this to go on a multi-day trip then they would become a problem I think.

So … I think I’m still looking.

The Specialized Fatboy costs just under $2,500 and that’s just a bit too much for me right now given the amount of rides in Tassie I could think to take it on and because I think I’d want to change a few too many things on it … though if and when they sell the demo bike at a discount I might change my mind.

Avantiplus Sandy Bay have a fatbike for $1,500 but as much as I like the look of it, it also has no easy way to attach racks and it also has a triple chain ring up front and everything I’ve read about fatbikes says that’s an issue when you really let the tyres down (if you don’t know you generally ride these things with around 5 to 10 PSI in the tyres).

Cyclingo have a Kona fatbike for hire which I was keen to ride, but then I found out it would be $250 for the weekend and that’s a bit rich for my pocket.  I also know there’s a fatbike outside Ken Self (I think it is a Mongoose) and Ride Bellerive are getting in a Norco fatbike … so there are options.

In terms of why you’d want a fatbike in Tasmania, well there are some great potential trails out there … The West Coast beaches, (anywhere from Granville Harbour to Temma) and there’s St Alban’s Bay, Henty Dunes, Peron Dunes … just a quick skim down the 4WD trails in Tasmania page shows a number of rides that are on my bucket list  Then (if fat works on rail) there’s the old Derwent and Scottsdale train lines waiting to be ridden … but in the end, there’s still probably only a dozen rides in Tasmania that really call out for a fatbike … and that’s a lot of money for a few rides.

Oh the anguish of decisions …