Long, long ago (because I’m busy and it takes a while to put these guest posts up), in a time when maps had “there be dragons” etched on the side of them … and they really meant “there be dragons”, two bold adventurers set forth on the second day of their adventure through Tasmania’s North East (part one is here if you missed it) …  Today’s goal … to get back to where they started from.

Alive, and preferably still talking to each other.

Back in the Saddle

When you’re aching from the previous day of riding and provided with a hearty breakfast that must be eaten out in the sun for maximum enjoyment, it is often difficult to self-motivate to do it all over again. Especially when you’re just going to do a loop and end up at your current location at the end of the day. Even more so when you know you have to start by climbing the hill you descended the previous evening.

After a lazy breakfast, giving the bikes plenty of time to graze amongst the trees, we were neither mentally nor physically ready to ride. But the time of reckoning had come.

The Emu Road climb was surprisingly not as torturous as expected. In no time at all (which in reflective terms equates to about an hour) we had climbed all the climbing, and were ready for our friend, gravity, to repay its debt. After riding the Blue Dragon earlier in the year, we were excited about riding the RC track, which had been one of the standout pieces of track from the race. We may have even previously referred to this as “one of the best pieces of single track we’d ever ridden.”

Even without pink bunting and race wardens pointing us in the right direction (and even with GPS breadcrumbs that were about 50m off-course) we found the start of the track, and it was on.

And then, mere seconds later, it was off again. Tree down across the track, but these things happen, apparently trees do fall in the woods, so no big deal. Clambering over the single offending tree, we continued merrily on our way.

The first hundred or so metres of the track has clearly been the plaything of trail bike riders, and was quite muddy and rutted. We expressed our hopes that it wouldn’t be this way for the entirety of the track.

There’s an old phrase – “be careful what you wish for.”

The tyre ruts halted abruptly at a larger tree (a behemoth of the forest, in all honesty) across the track. This one required a little ingenuity to pass. Remembering what we had learned from going on bear hunts, we went around it (as we couldn’t go under it).

Post tree, the track was free of trail-bike degradation, and the next 500m was fast and unimpeded. Except, of course, for the dozen or so trees that we had to navigate over, under, around, and at one point, seemingly impossibly, through.

This was our life now.

For the rest of the RC track we alternated between cursing nature for its cruel blow, and laughing deliriously at how utterly depressing it all was. We soon lost track of how many trees (or obstacles-formally-known-as-trees) we had encountered.

One of the larger trees had even managed to fall up the hill and across the track. At this point, Gaia was just toying with us. Freaking Gaia.

As anyone who rode the Blue Dragon would know, the OC track ends with the push up that hill. Everyone pushed that hill, and anyone who says they rode it are not to be trusted. I think at some points the slope actually exceeds 90 degrees, and we were free-climbing with our bikes slung across our backs. Probably.

Of course, that was the only part of the track that wasn’t covered in trees.

After a quick break at the top of the hill to regain composure, and kick a few trees out of frustration, we exited the single track to find that the final section had been sculpted by some of Tasmania’s Ultimate Conservationists. At this stage, we were just delighted to find some track that was relatively free of trees.

We had been hoping to cut some time off our previous RC time, and then exchange some well deserved Strava-related high fives. In the end, we added around an hour and a half, so it wasn’t exactly speedy.

We Must Civilize the Heathen
Frome Road brought us back out onto the Tasman Highway, past the Moorina Golf Club, and gave the dragons a chance to learn a little about their heritage.

Take me to the Water

After the disappointment of the RC track, we feared that the River Track had suffered the same fate.

Luckily, it was just as brilliant as it had been during the Blue Dragon, with the added benefit that it was 17 degrees, and not 37! 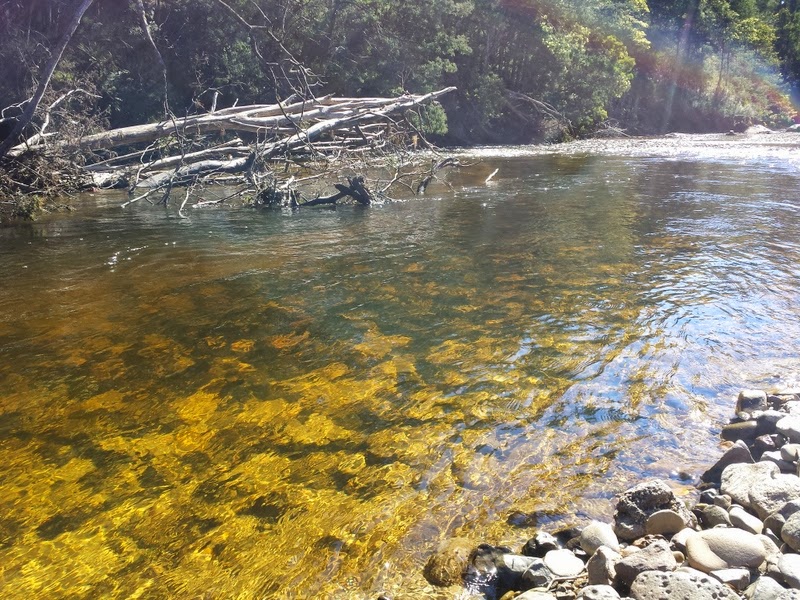 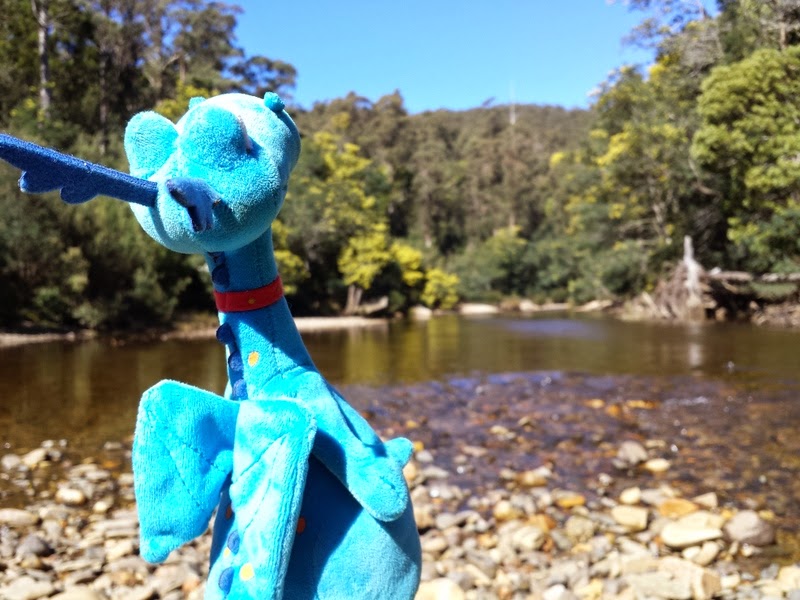 As an aside, when descending (at speed) down the first hill to the riverbed, a feral cat managed to run between my wheels (unscathed!) which was pretty darn impressive. Kudos that cat, everyone.

We worked our way along the river, emerging at the bottom of Mutual Road, looking expectantly for the feed station with deliciously refreshing watermelon. Alas, this time there was none.

Trying to hide our disappointment, we continued up Mutual Road (taking the soft option up the bitumen towards Derby, rather than the demoralizing grind up into the forest that claimed many a victim back in January.

Soon we emerged overlooking the giant Fish Rock, which I guess must be the Mayor of Derby. It certainly looks very regal.

Have Torch, Will Travel

Some people make the mistake of not taking a torch when they visit the Derby Tunnel, which must be a bitter pill to swallow. At least said people are good enough to write of their traumatic experience, alerting others (such as us) to the fact that there is such a thing as the Derby Tunnel.

With this knowledge in mind, it was a short detour down to the tunnel entrance, which was embarrassingly difficult to find. However, find it we did, and lights in hand (well, on head) we ventured inside.

The tunnel extended for probably a couple of hundred metres under the hill (for some reason the GPS cut out at the crucial moment, so we couldn’t get a precise measurement). It then suddenly started to slope downwards, and the tunnel was from that point onwards underwater.

The tunnel floor was littered with little pieces of history, from old shoes, to rusted pieces of tram line, to glow sticks. It was, to say the least, an impressive piece of digging.

Derby is becoming something of a singles scene, as we found out when riding back from the tunnel. Everywhere we looked, brand new single tracks were popping up, with berms so large that you probably need to register a flight plan before tackling a corner.

The new tracks (and we only saw but a few) certainly warrant a return visit when they are completed! However as the tracks were taped off, and we are responsible, we didn’t ride them. Also, they were unrideable.

Rolling in to Derby, it was well and truly lunch time. Unfortunately, Sunday in Derby means that available amenities are reduced to the level of any other day in Derby. Still, decisions are hard, and so we chose the one option available to us, which shall remain unnamed for psychological reasons. It should suffice to say that the coffee-approximation that they served was definitely gluten free.

The sign proudly offered chicken burgers with the lot, which sounded like exactly what a famished dragon rider would need. Not a burger with a bit, or a burger with pretty much everything, but the lot. It should be noted that we did not, at this stage, realize that the lot in Derby is pineapple, egg, and Tummy Demons.

Still, the Demons, who would not make their presence known until the following day, were pretty delicious, and provided enough leg fuel for the impending climb (yes, there’s always an impeding climb).

Lunch was followed by a quick dessert of “Uploading photos to Instagram”, which as everyone knows, is supremely important and takes priority. This from the pair that vacillated between panicking about running out of time and taking unplanned detours because “Oooh, that looks interesting, what’s down there?”

Further Up and Further In

The climb up to Cascade Dam was where we started to flag, even with a quick gel-of-unknown-substance to fire us up. Seriously, I don’t want to know what is in those things.

During the Blue Dragon we rode past Cascade Dam without a second glance. There wasn’t even time for a first glance! This time we were much more casual about the whole endeavour, and as we were there for the dual purposes of exploring and also destroying our legs, we rode down to the dam for a look. 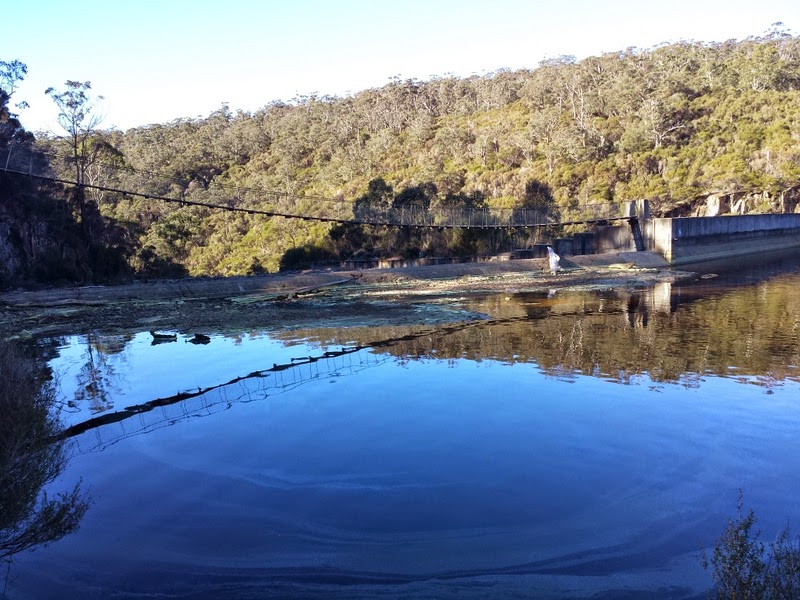 As dams go, it certainly was a dam. Sure, at the time it was pretty impressive, but as the author of this post I have the benefit of hindsight, and the next dam was the one to really get excited about, if dams are your thing.

After leaving the Cascade Dam, we continued through the lush forest for a few kilometres, before being presented with an option, one of those things that is both a blessing and a curse when it comes to mountain biking.

On the left, an unknown trail (the best kind!) that led, probably, to Mt. Paris Dam, which was the final target for the day. On the right, the climb towards the base of Rattlers Hill. As we’d already climbed that way during the Blue Dragon race, it was off into the unknown!

Finding the Mt. Paris Dam was a simple affair, as someone had helpfully painted large red arrows on a series of trees, which we followed blindly. There was no indication that the arrows were our arrows, but they seemed to be pointing in the direction we wished to go, and we didn’t end up murdered, which was to our advantage ((Ed – this detour is described in the Rattlers Hill notes on tassietrails).

North of the Wall

Following the tree arrows, the Mt. Paris Dam wall provided a shock when we rounded a corner and it suddenly appeared in front of us, in all its glory. Seriously, that is one large Wall in the Wilderness (I wonder if they could trademark that?). The dragons wandered around the wall marvelling at the engineering that went into the construction of the dam (and then subsequently into blowing a series of holes in the side). 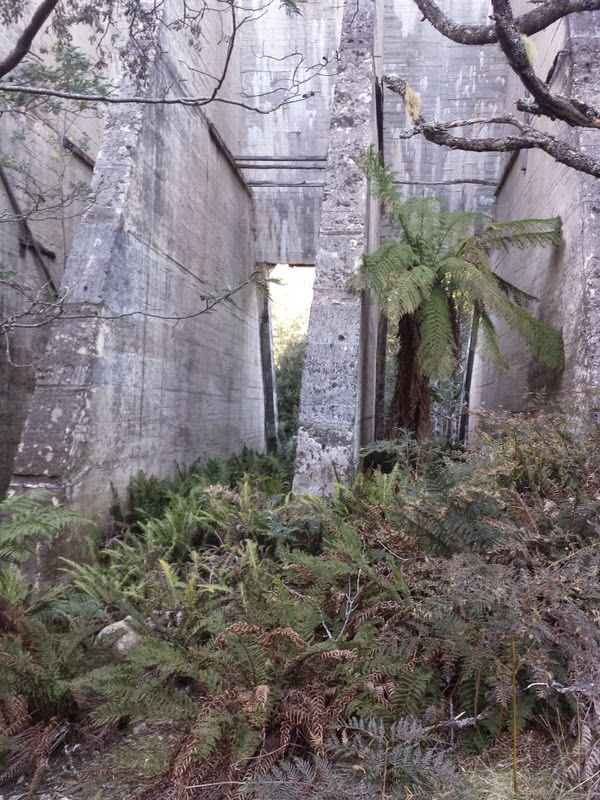 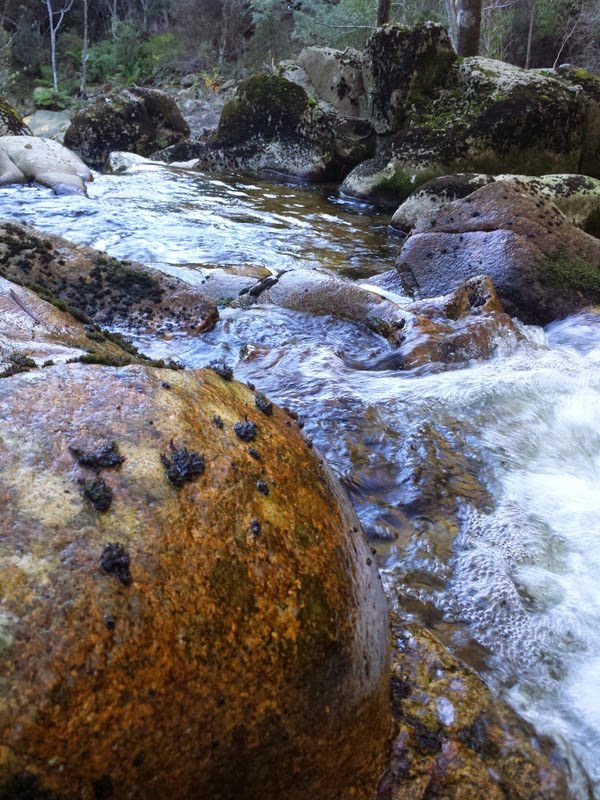 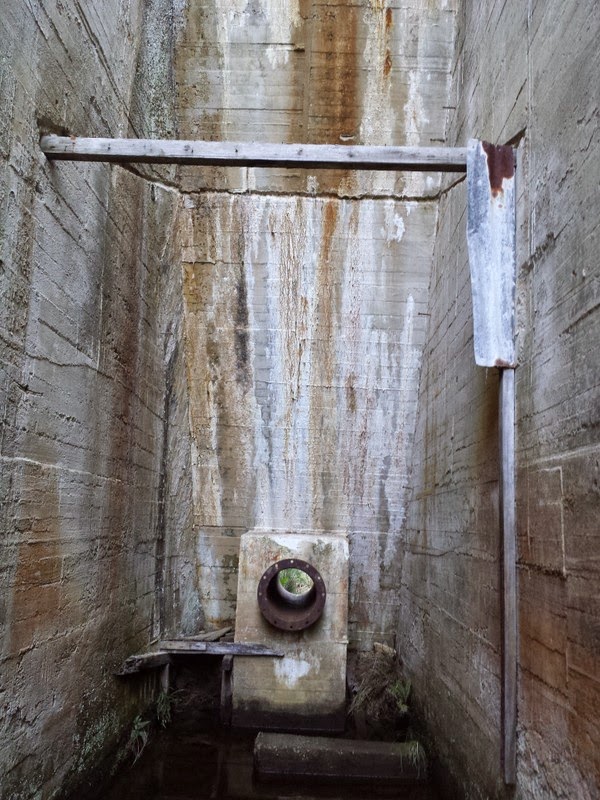 They sure would have needed a lot of wheelbarrows for mixing all that concrete.

From the dam it was a relatively easy ride back into Weldborough, where we broke with long-held tradition and arrived before nightfall, which made washing the bikes a lot more pleasant. Time for another celebratory beer!

It was about this point that the Tummy Demons began to make their presence known, which would make for some interesting riding the next day…

So we ended the day with an average velocity of 0km/h (one for you maths nerds out there). The second day had some highlights (River Track, Mt. Paris Dam, Derby Tunnel) and some disappointments (the RC Track, and the Derby food), but at a mere 50km we were pumped, and excited to start Day 3!

Nope, that’s not true. We tried to watch a movie but couldn’t even make it to the part where the hero gets their quest.

Now we’ll never know How To Train Our Dragon (2).