You probably know the answer to the question “Why did the chicken cross the road?” (if you don’t, it’s “to get to the other side” … come back to me when you stop laughing)

But do you know the answer to the question “Why does the rambler cross the ditch?”

It’s to see what’s on the other side.

Yep, I spent last night crammed into a tiny cabin, with three other guys I didn’t know, trying to get some sleep after having eaten what I swear was one of the worst meals of my life, ever.

Seriously, if you’ve ever wondered what happens to those people who don’t make the grade preparing hospital meals … well I’m about to tell you … they go and cook at the Captain’s Table restaurant on the Spirit of Tasmania.

I got BBQ chicken wings (which were undercooked and inedible), I tried the butter chicken (which turned out to be the highlight of the dinner because it’s only fault was that it was pretty much tasteless). I tried the quiche (at least I think it was supposed to be a quiche), but it was so dry I couldn’t swallow it, and then I had the roast (which was again so dry I couldn’t stomach more than a few bites). The roast also came with steamed vegetables which had the dubious distinction of being both cold, soggy and tasteless … but I ate all my veggies because it was a “get as much as you can on your plate, no repeats, buffet” and I could only eat the butter chicken and veggies.

Now before you tune out and think I’m just having a whinge, I’ve included that review of this meal because it highlights the point of the blog (OK, more honestly I got this far and thought “Gee that sounds like a whinge, I had better justify it”).

My newly created point is this: Sometimes without the perspective of what’s out there in the wider world, we think Tasmania is the most awesome place that there is (or we think that the food we serve on the ferry is good enough), but when I go on my frequent sojourns from our beautiful little State and see what the rest of the world has on offer, well I often find myself thinking “Huh, turns out we aren’t so special in that respect after all”.

Which brings me to Lysterfield Park in Melbourne. 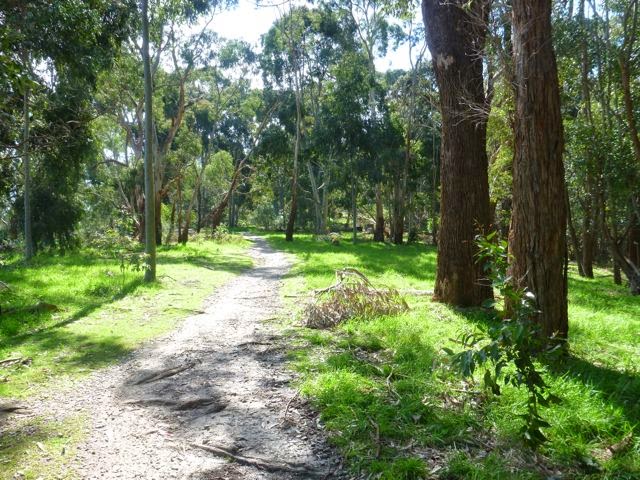 The original plan for this trip was for me to head down to Lorne to do Amy’s Gran Fondo tomorrow. I even forked out my $200+ (non-refundable) entry fee, but unfortunately I’ve been quite sick over the last few weeks (see, I don’t whinge about everything on this blog) and having been unable to do any training at all, decided to pull out leaving with me two days to kill in Melbourne before Kim flies in to join me on Monday.

I had an idea of what I was going to do with one of those days as soon as I made the decision not to go … I had seen a Dirt Art photo of some new trails up near Buxton and I knew I just had to ride those, however I was less sure about today …

Which was when I stumbled across the Lysterfield rides on Strava Heat Map, and so after a lazy morning breakfast with Kerry at Southbank, I found myself driving to the main trailhead at Lysterfield

Yes, I was on the outskirts of a city that has eight times the population of Tasmania, and yes it was a nice sunny Saturday, but there were still more cyclists in the car park than I’d seen since the Wildside MTB event back in January.

Once out on the trails (and oh, what magnificent trails) things were never crowded, but you were also seldom alone for more than a few minutes and it seemed to me that it wasn’t unusual for riders to pass one another without even a cursory ‘howdy’.  I say this because, by contrast, I was saying hello to every cyclist I saw and I did get a few strange looks (but more importantly I got lots of smiles and hellos back).

I loved Lysterfield, I had low expectations of the place which may have influenced this, but it was still near perfect riding as far as I was concerned with lots of nice easy climbing and descending (don’t be fooled by all those contours if you download the parks map – the place is as flat as a pancake compared to Tassie riding) and most of it was through gorgeous eucalypt forest with grassy understorey … which just happens to be my most favourite type of forest in the world.

The tracks were in the main flowing with enough obstacles in there for a bit of a challenge if you wanted it, but the signage was missing at quite a lot of junctions (but follow your nose and you’ll find your way around).

I may disagree with their technical ratings because I thought pretty much the whole park (except for a small Rock Garden on the old Commonwealth (or was it Olympic?) games course was easy riding, not the blue and black that it was often graded, but …  in case you’ve missed the point …  WOW … I was buzzing the whole way around.

Don’t get me wrong, I love and am super excited about what’s happening in Tassie … the Meehan Ranges, Pickles Hill, Pilchers Hill, Derby, Hollybank, The Dial Ranges … and even as I write this today I see with moves are afoot to try and get some official recognition for the Coningham trails and get a new MTB Hub going over on the West Coast, Tassie is just abuzz … but WOW …  if Lysterfield is anything to go by, we’ve still got a big challenge in front of us for Tasmania to get known as an epic place to go for mountain biking.

Personally, I think we need a plan, and that plan has to start with those meals on the Spirit of Tasmania.

Yep, if we don’t fix them, then the drive and tour mountain bike market is dead before we even get it off the ground.

See, told you I had a point.