I went for a walk today, I really, truly, did …

Except as several thousand people already know from some photos I posted over on facebook, I sort of took my bike with me … 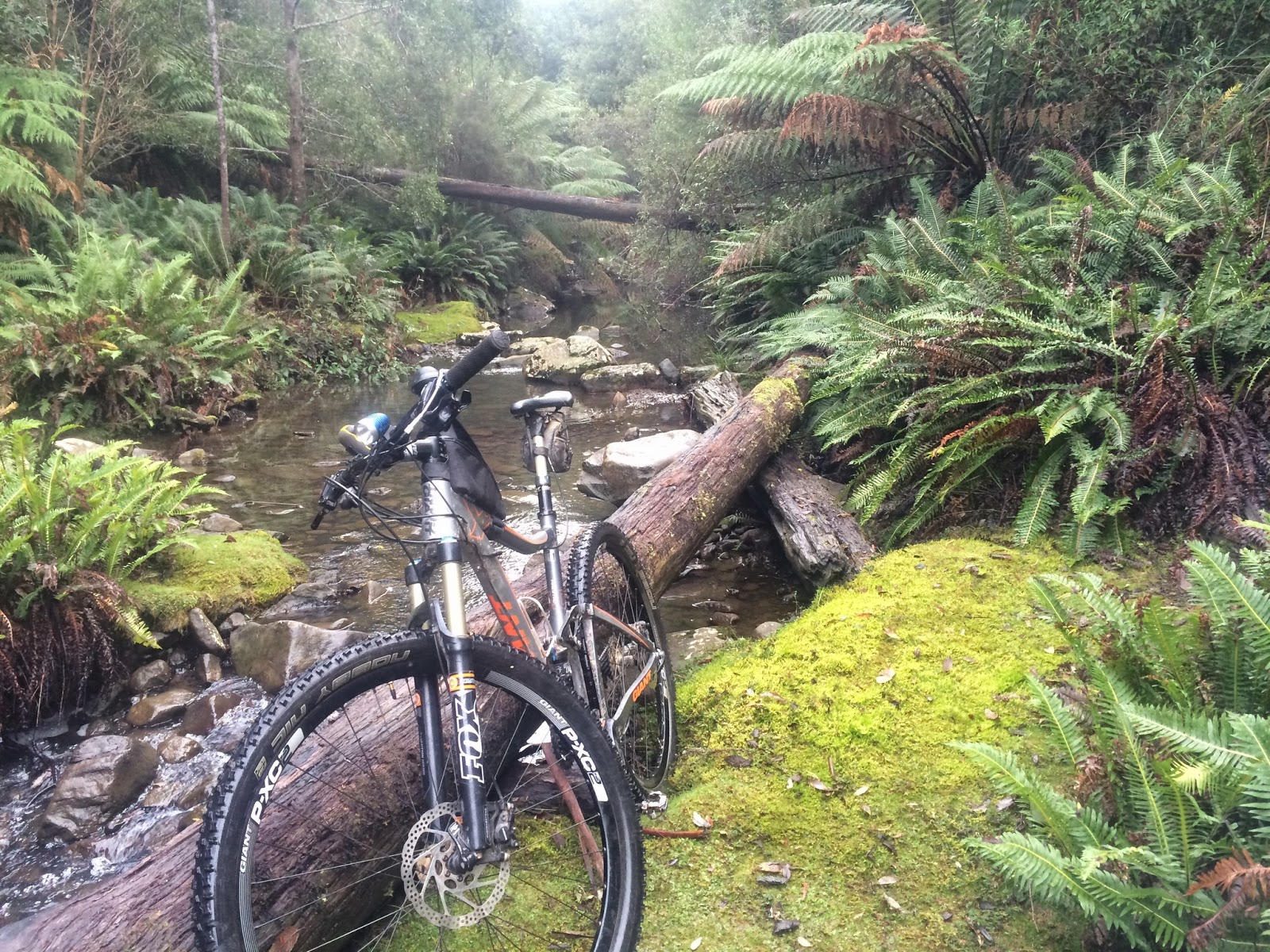 So maybe it would be slightly more true to say that I honestly, truly, planned on going for a walk today:  it’s just that there I was at the trail-head getting ready to set off on a walk when I glanced at my bike in the back of the car and this little voice inside my head said  “won’t you be pissed off leaving that here if the whole thing is ride-able?” and then this other little voice (I think it may have come from my bike) said “worst case scenario, you carry and push me for a while and if it’s looking bad you ditch me and pick me up on the way back …” and, other than the worry about all these voices talking to me in the middle of nowhere, I couldn’t really fault their argument.

So my bike joined me on my walk.

That’s the truth and I’m sticking to it …

Anyway, the plan for today was finally, after something like twenty years of meaning to do it, to go out and walk the track at the Sandspit River Conservation Area on Weilangta Road with the idea in the back of my mind (planted there during a ride around some of the Hellfire Trails) that maybe this trail would be an awesome mountain bike trail (that would bypass a very steep ascent and descent on Weilangta Road).

And to cut a long story short … it is and it does. 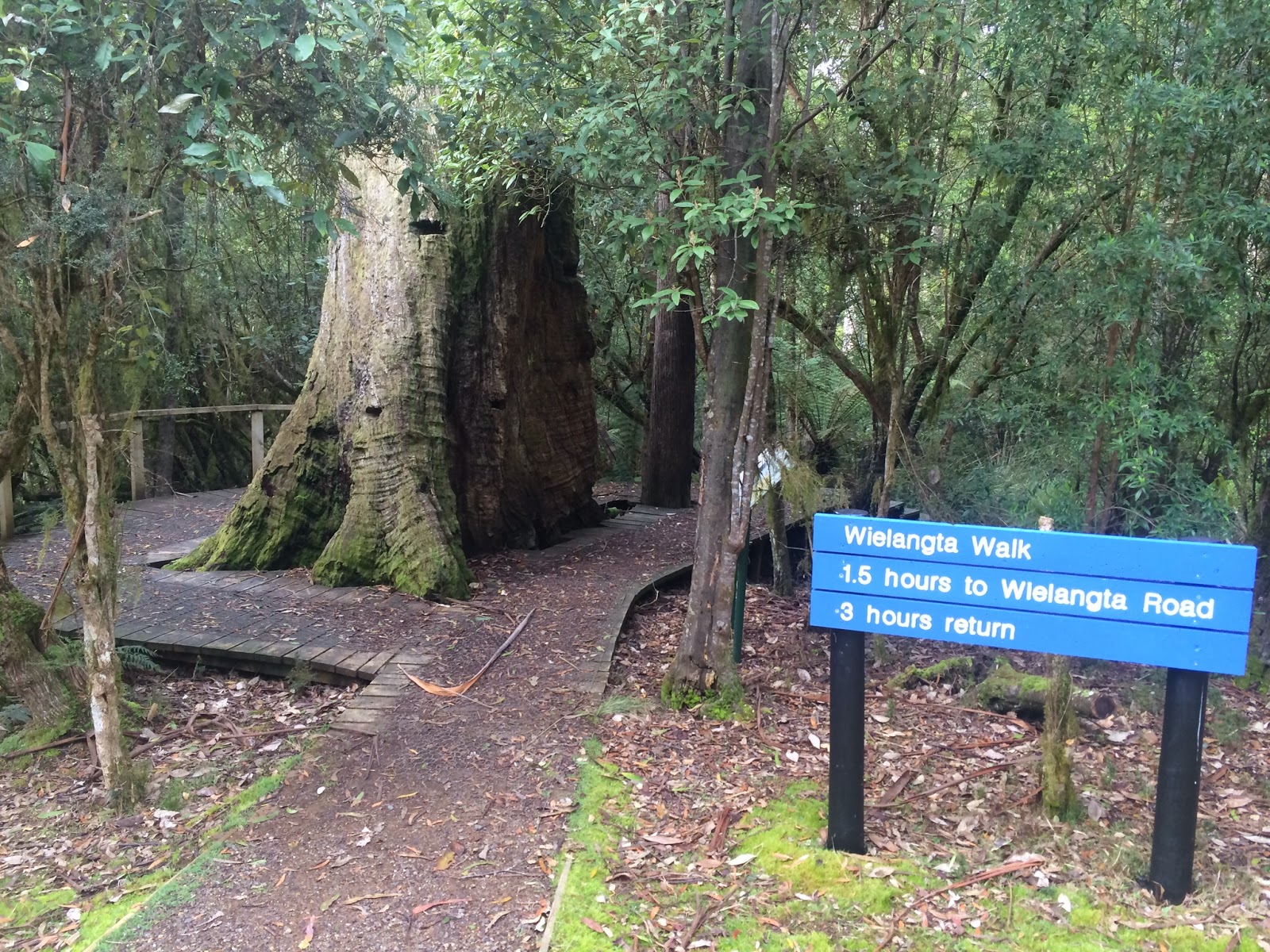 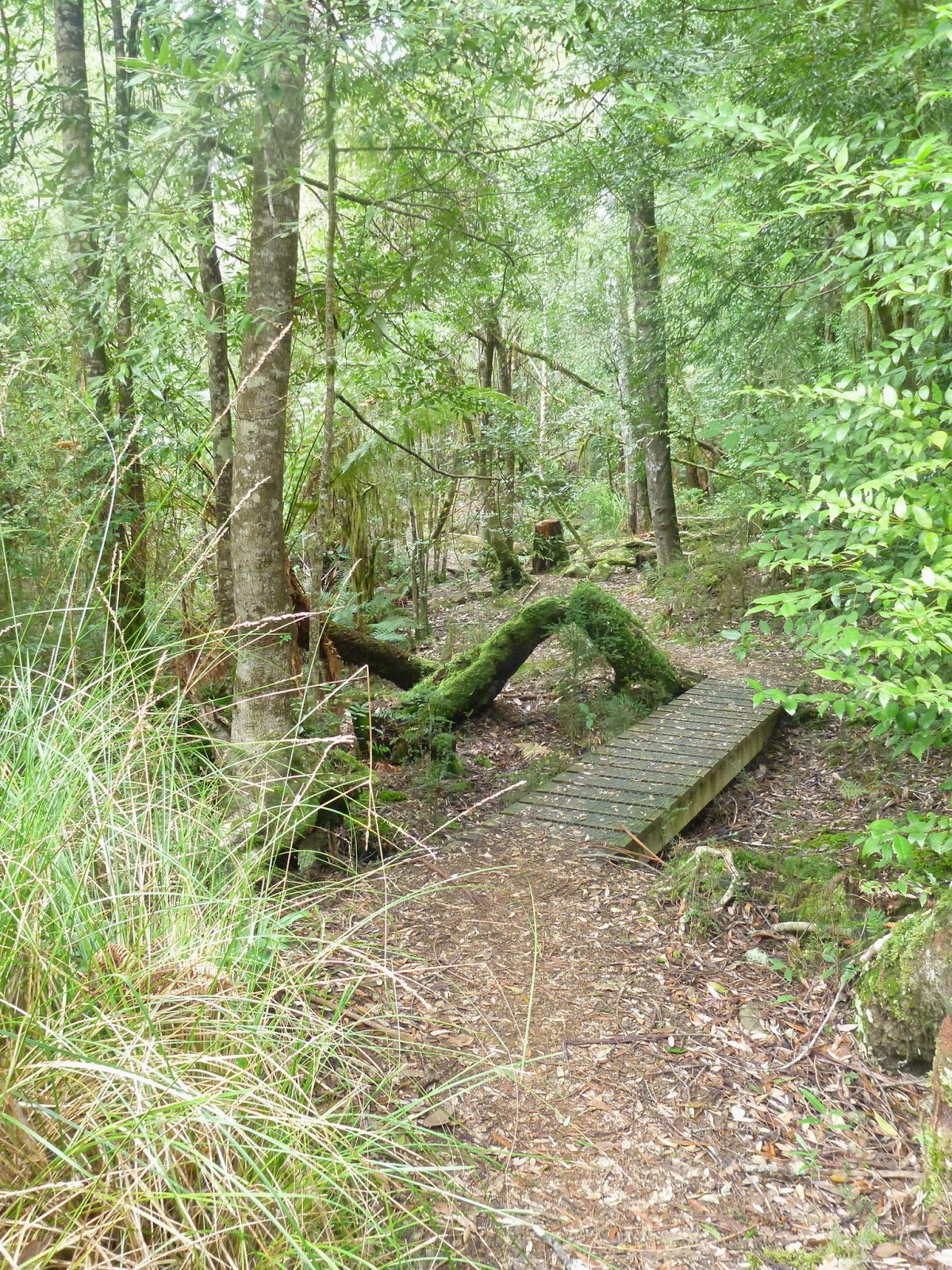 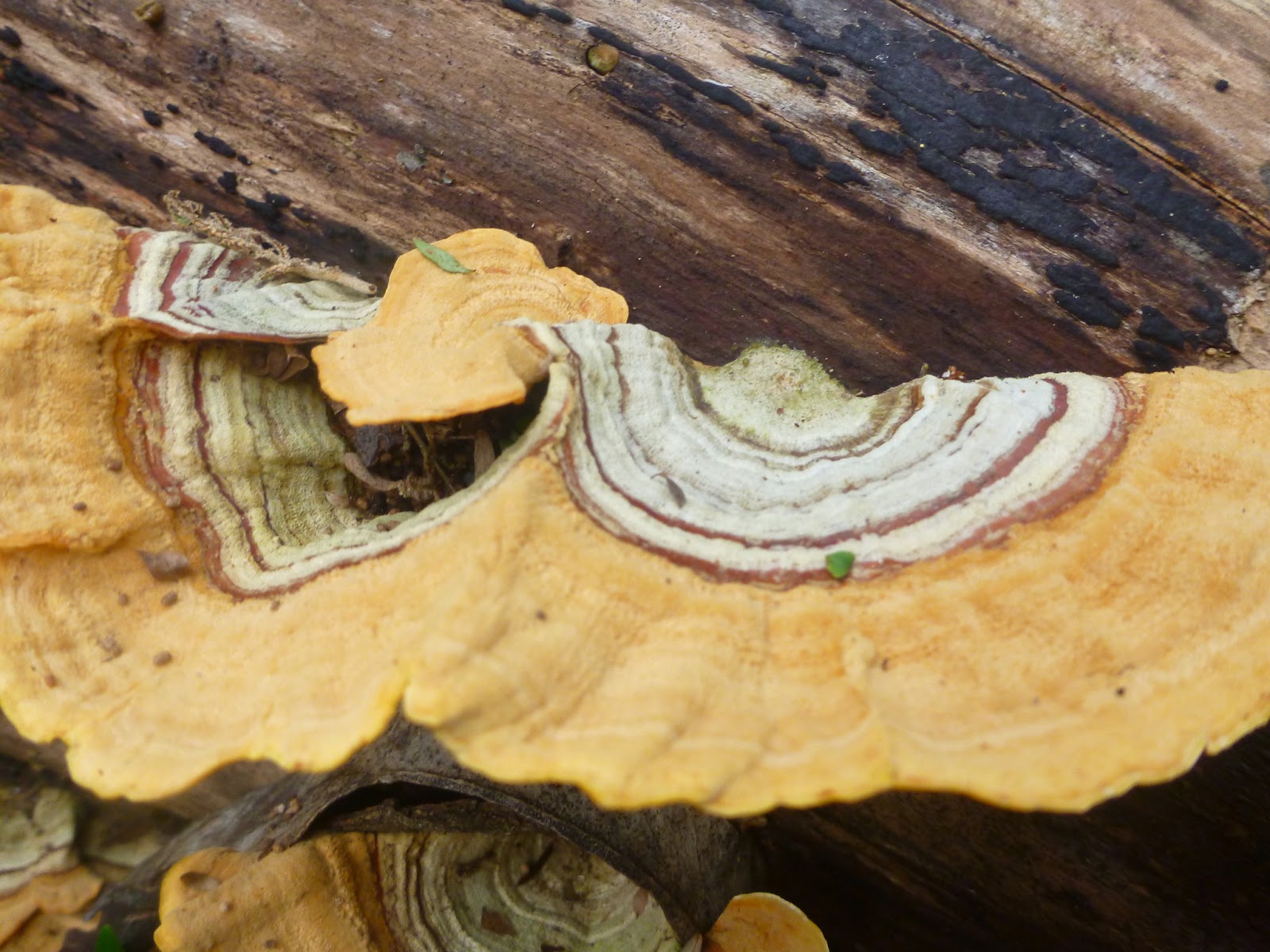 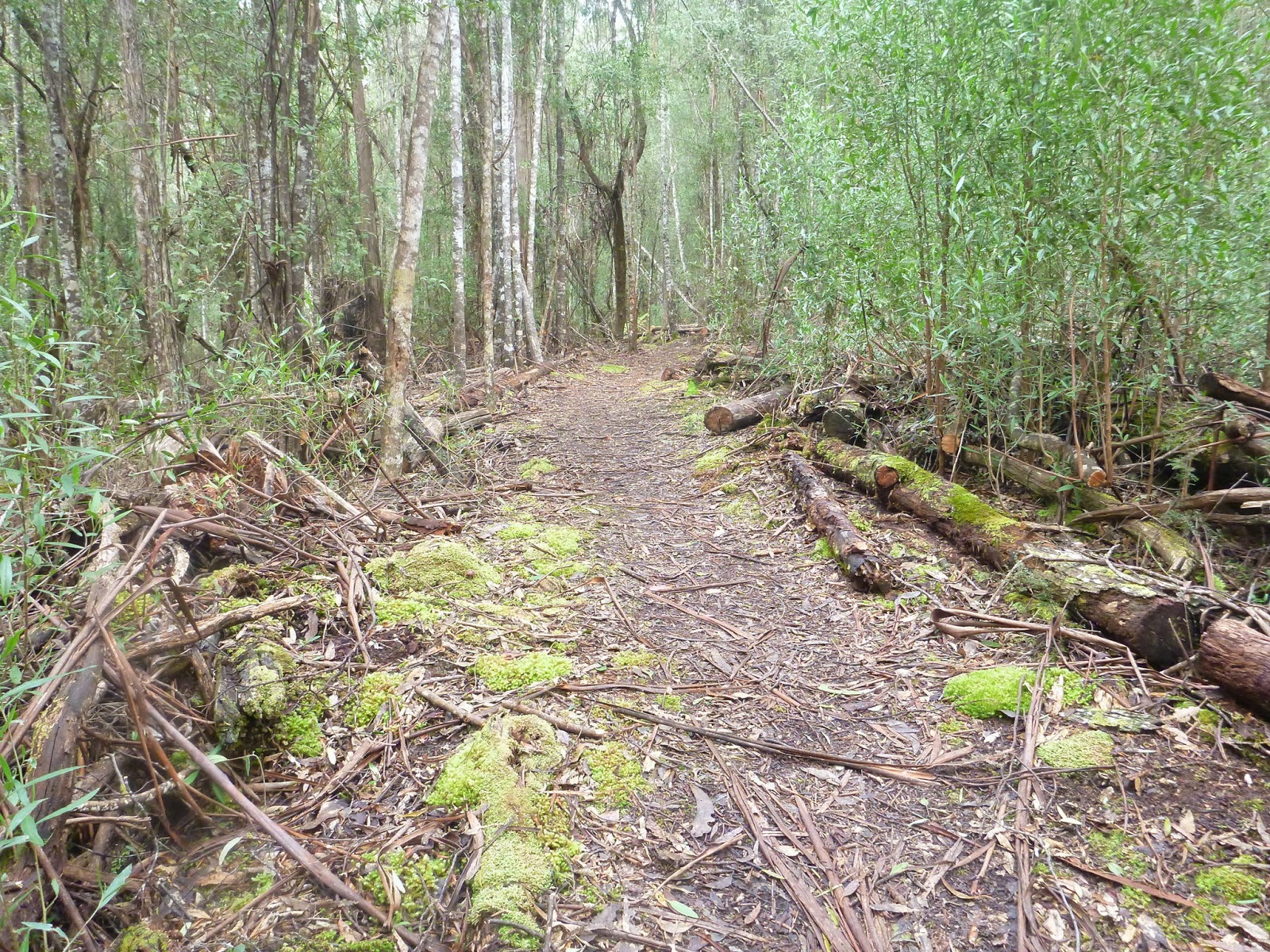 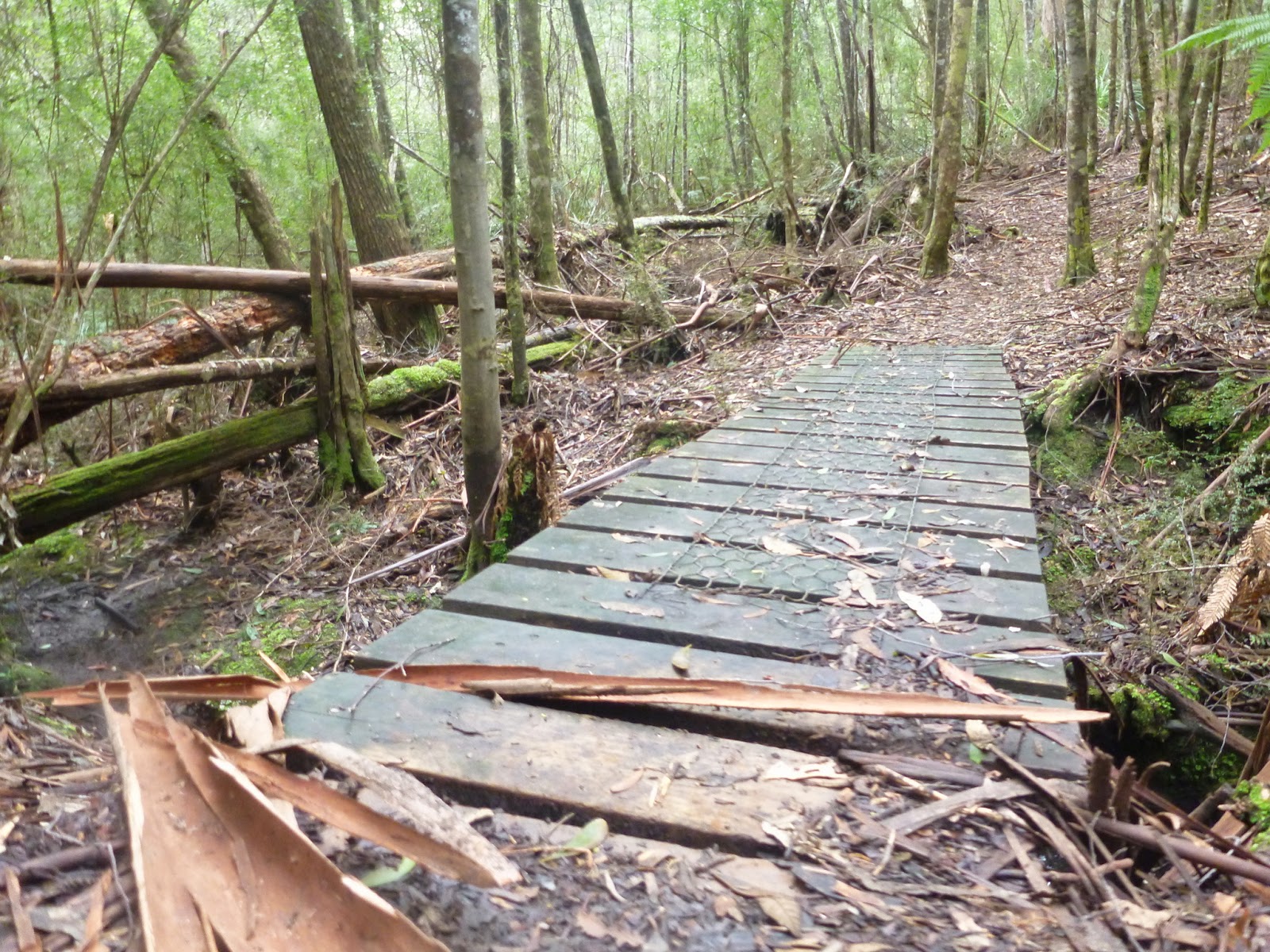 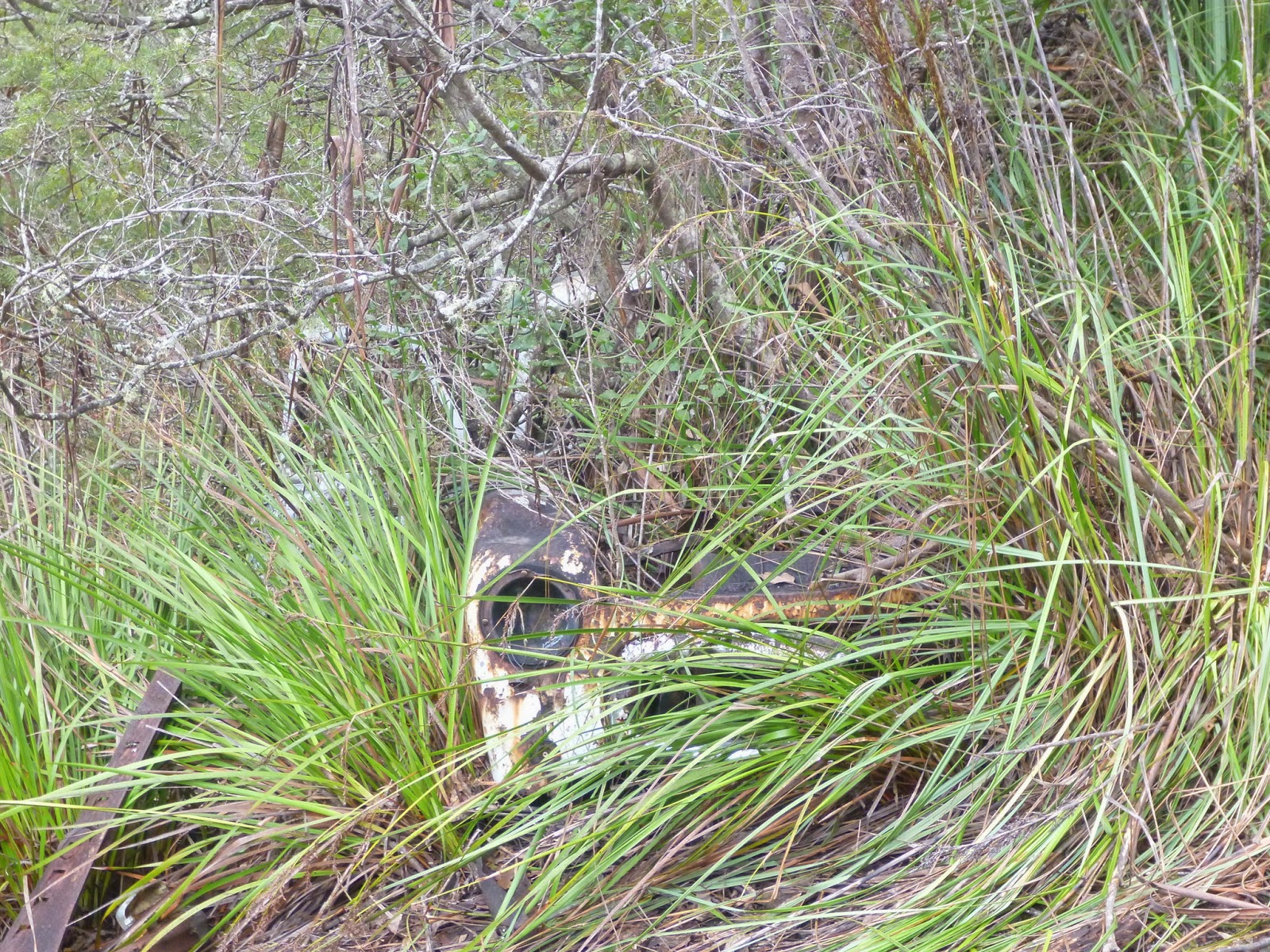 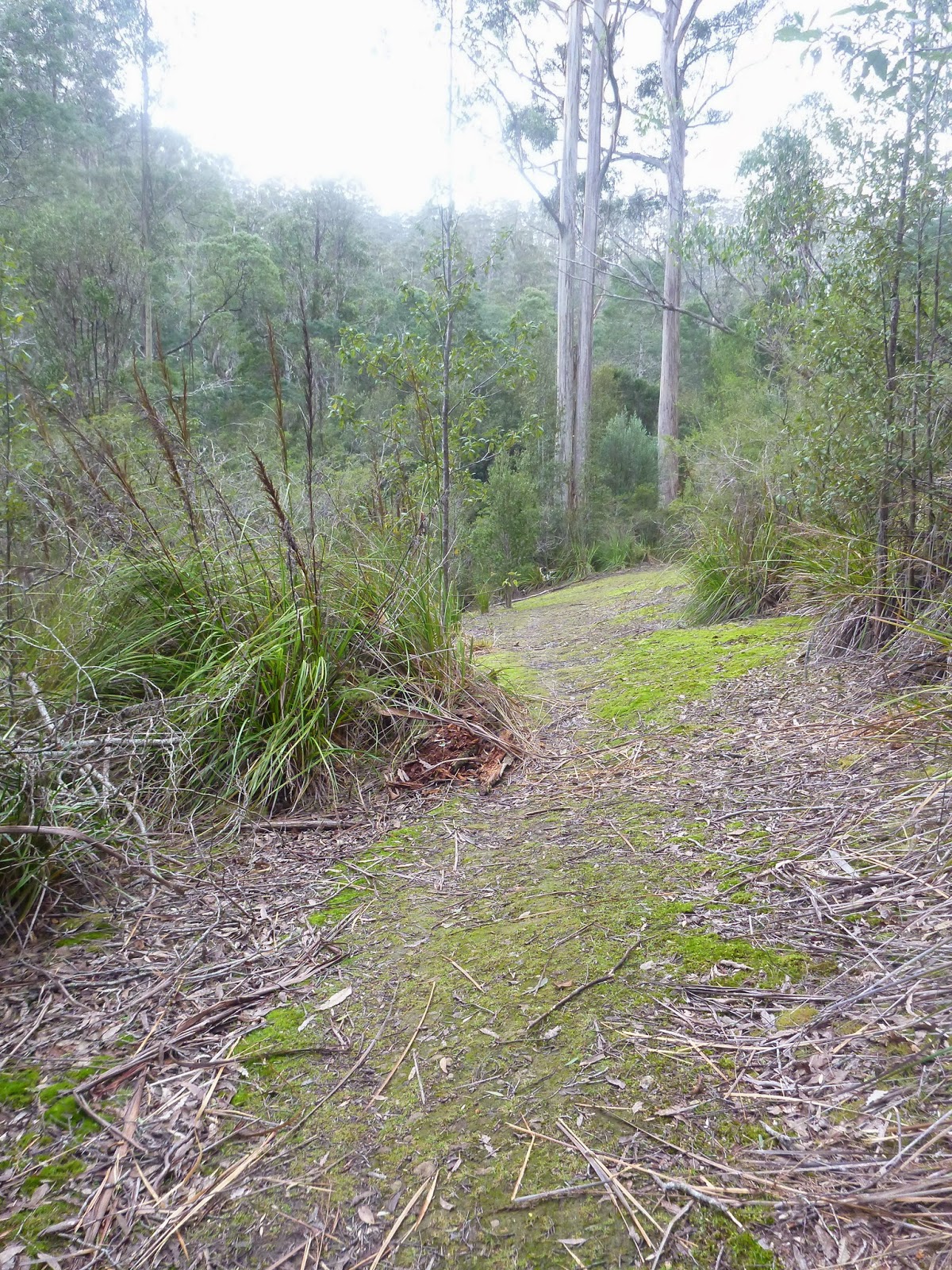 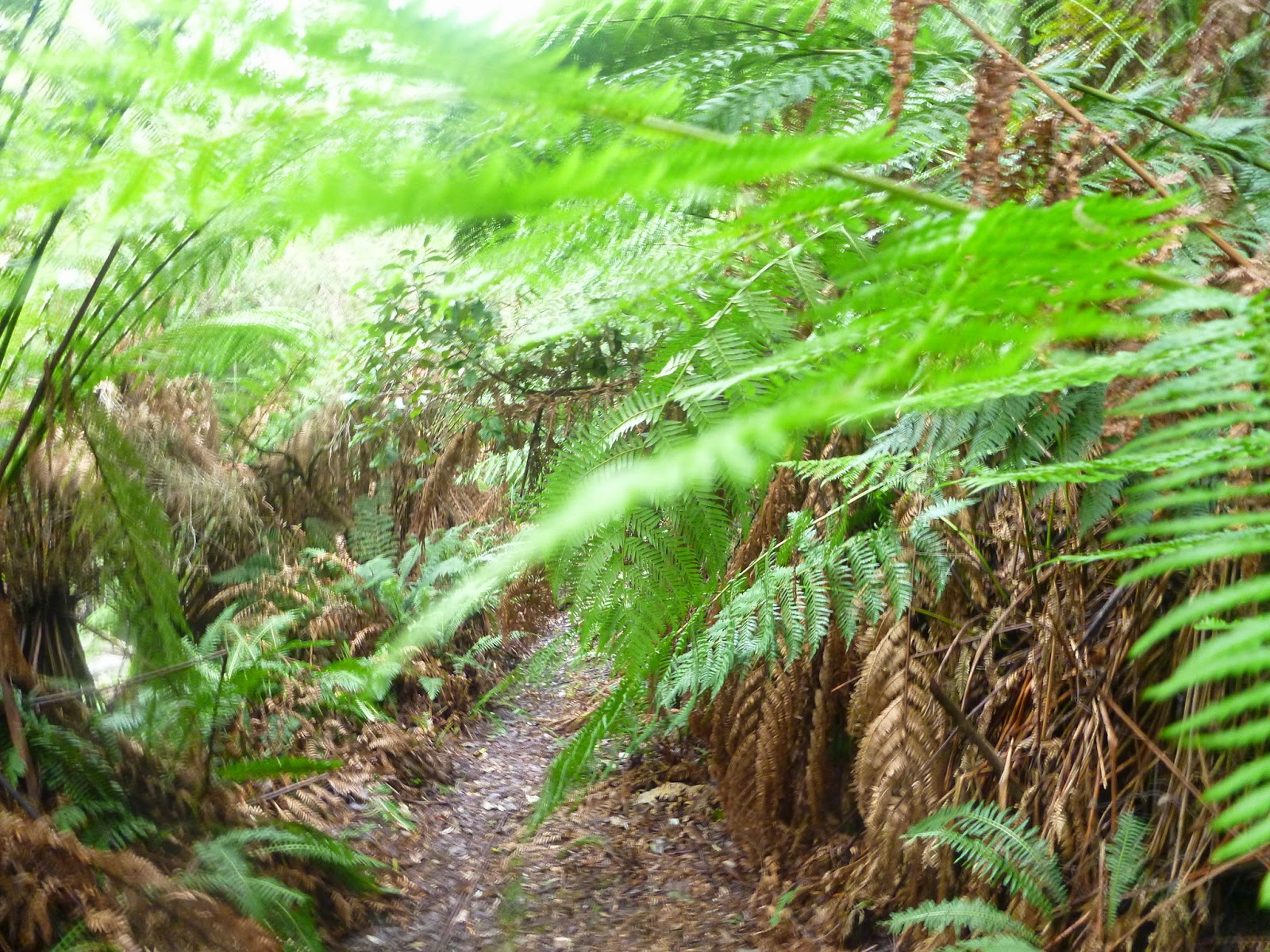 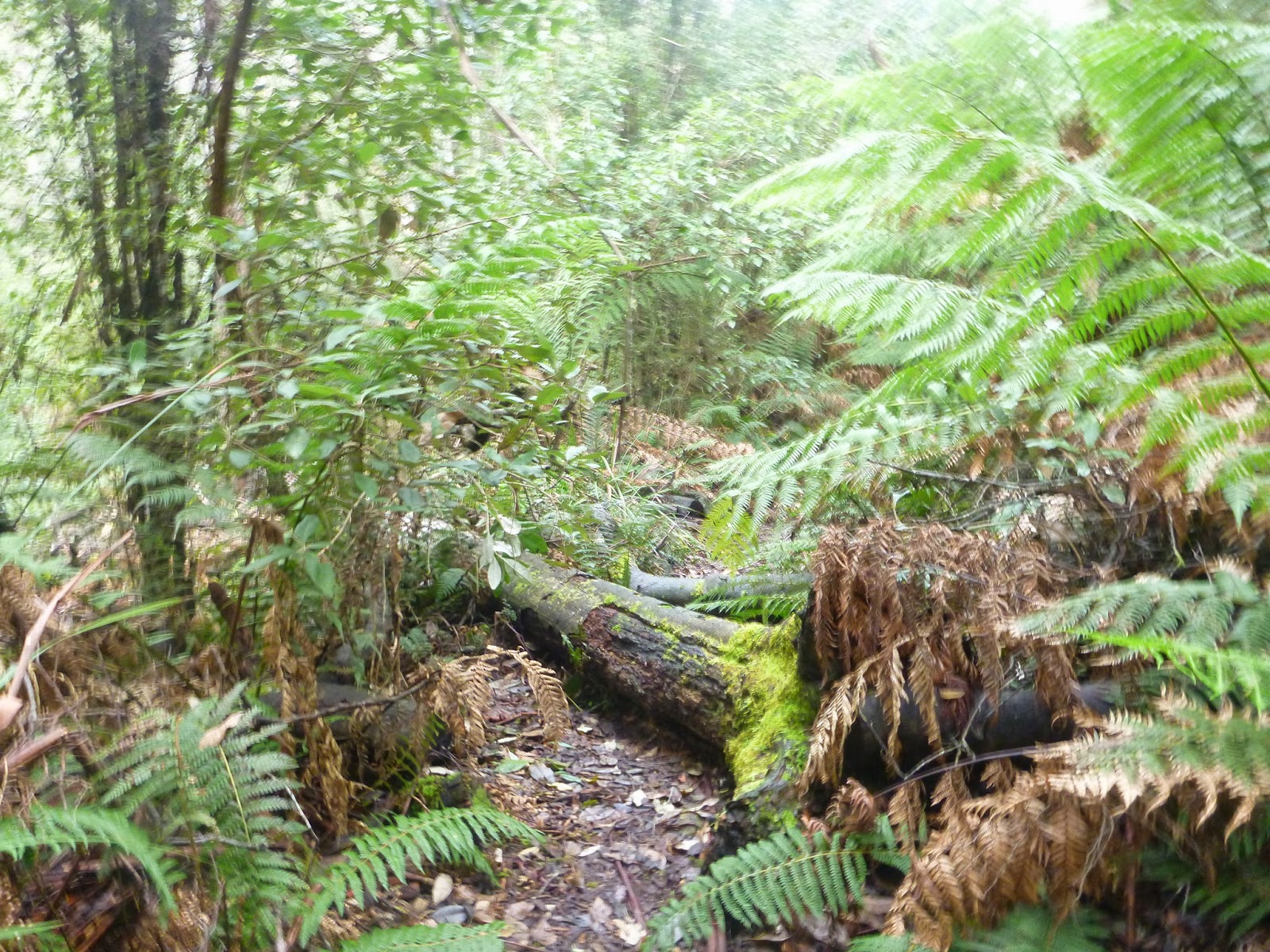 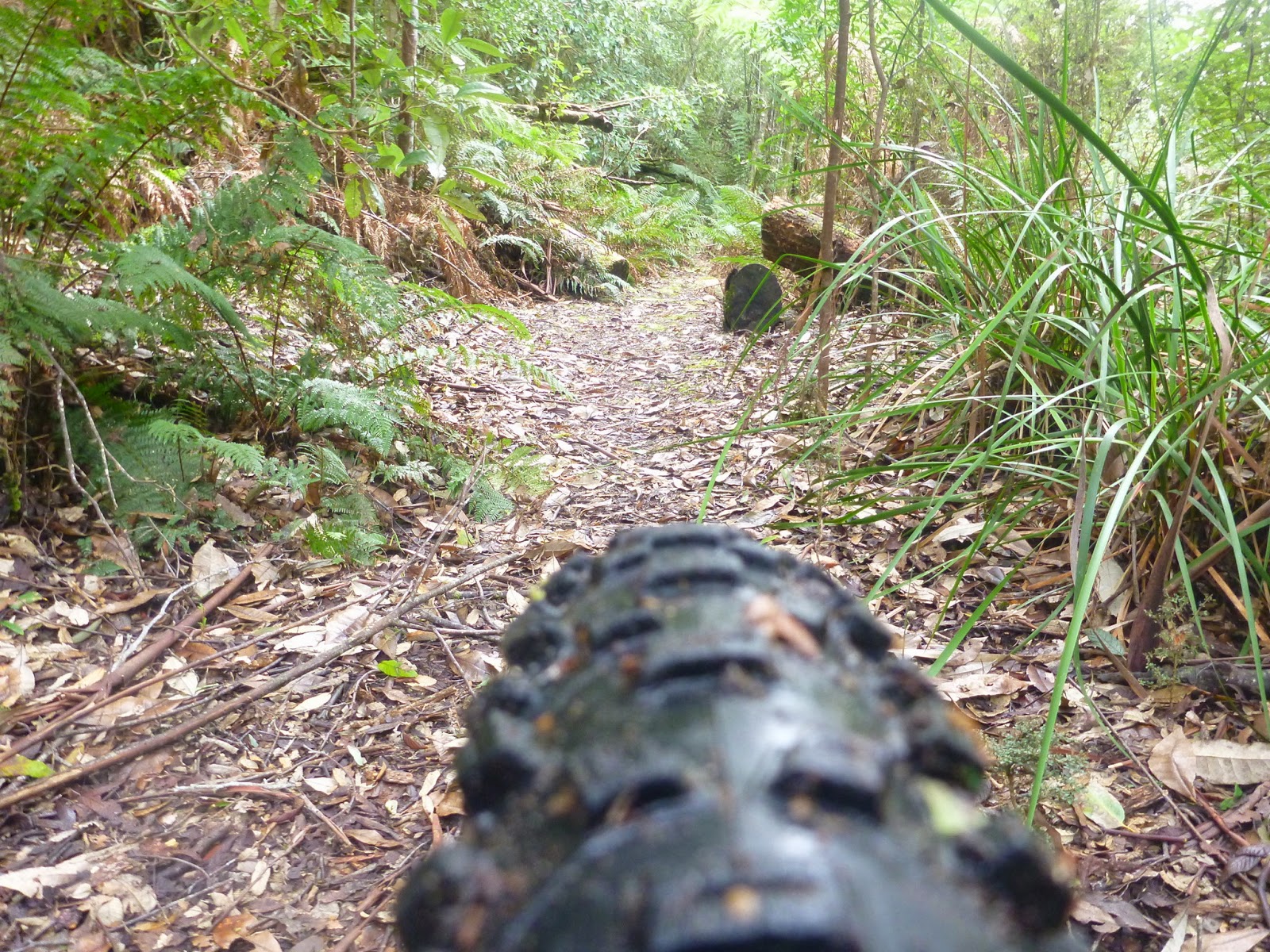 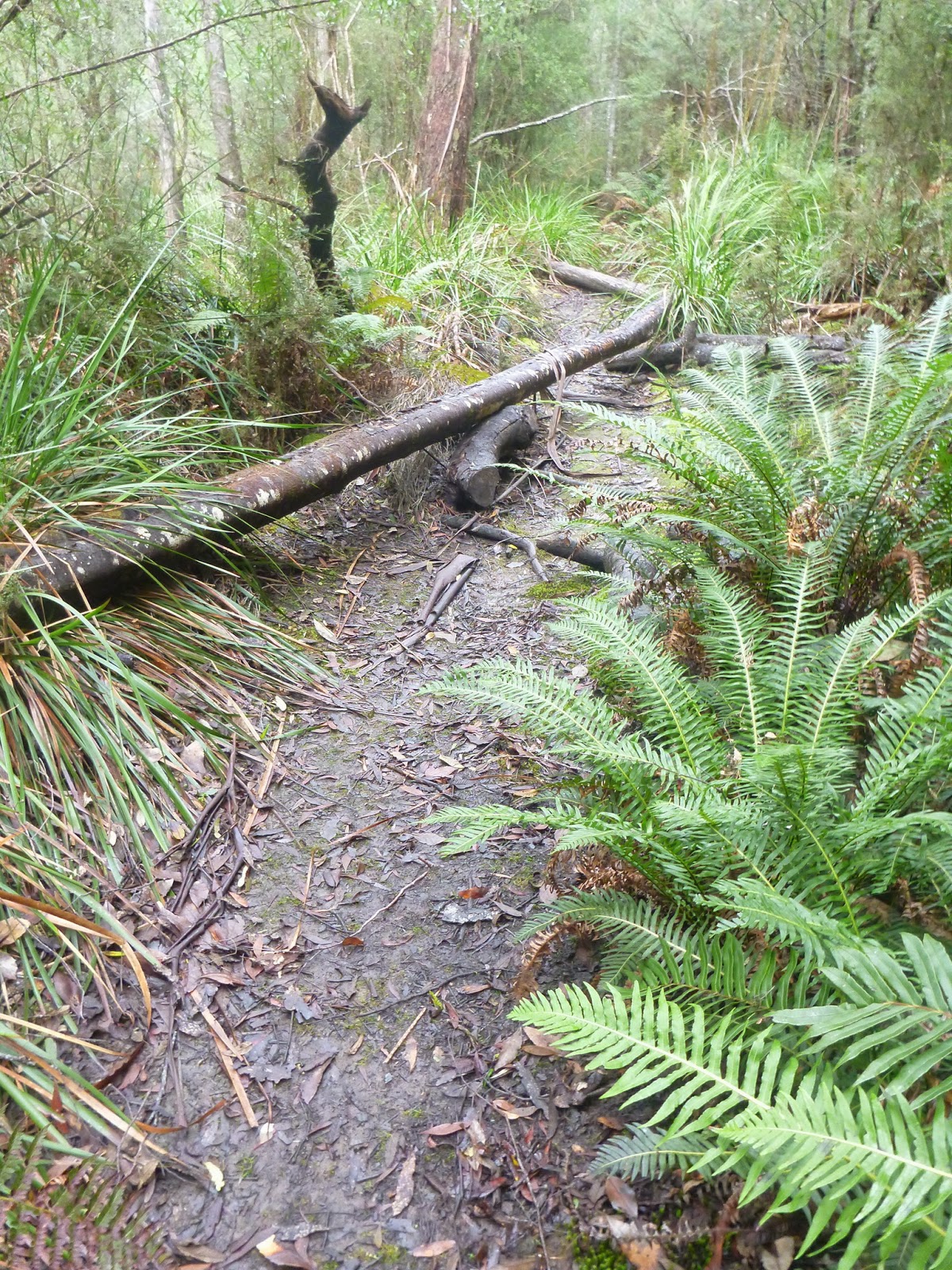 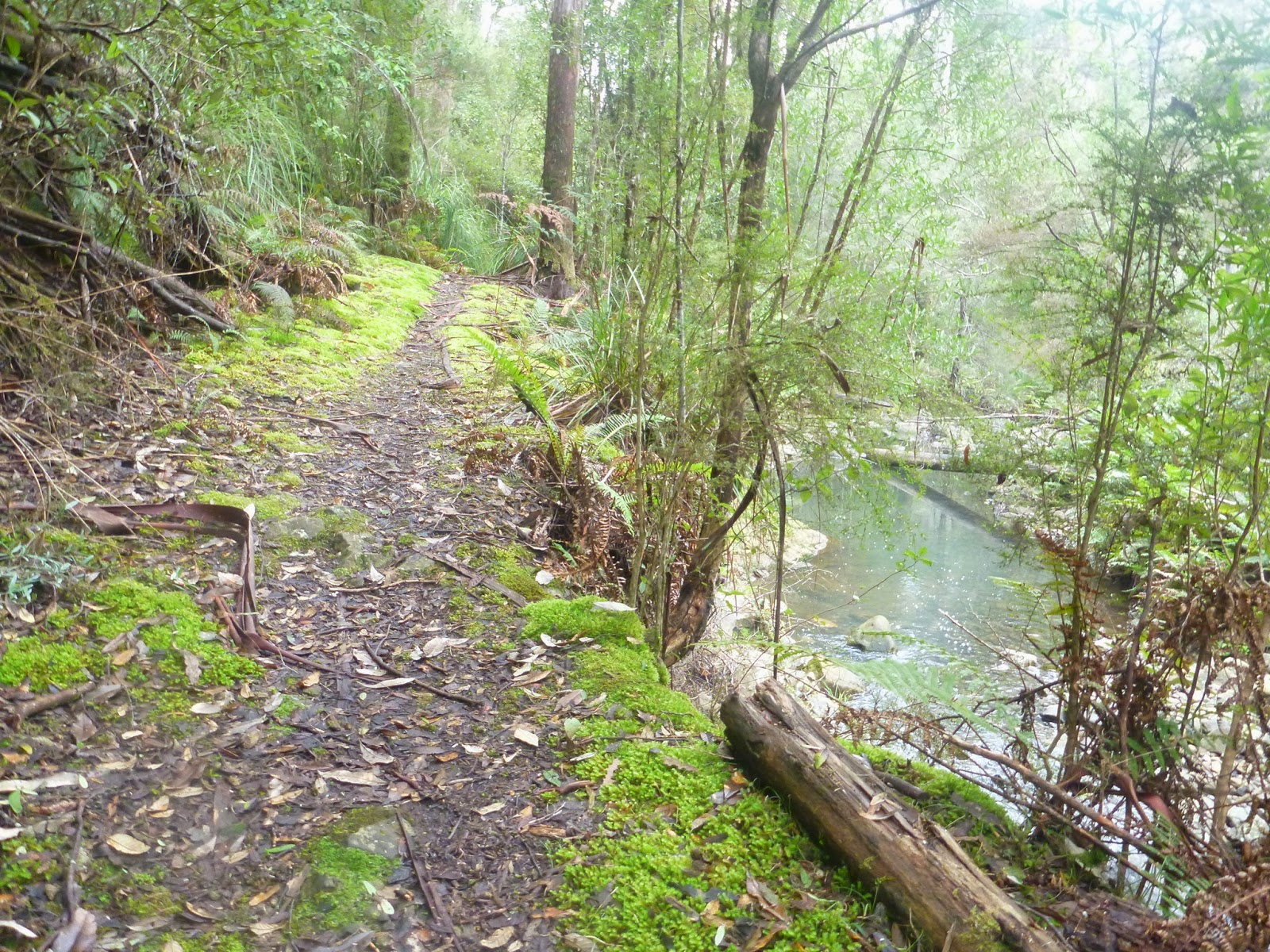 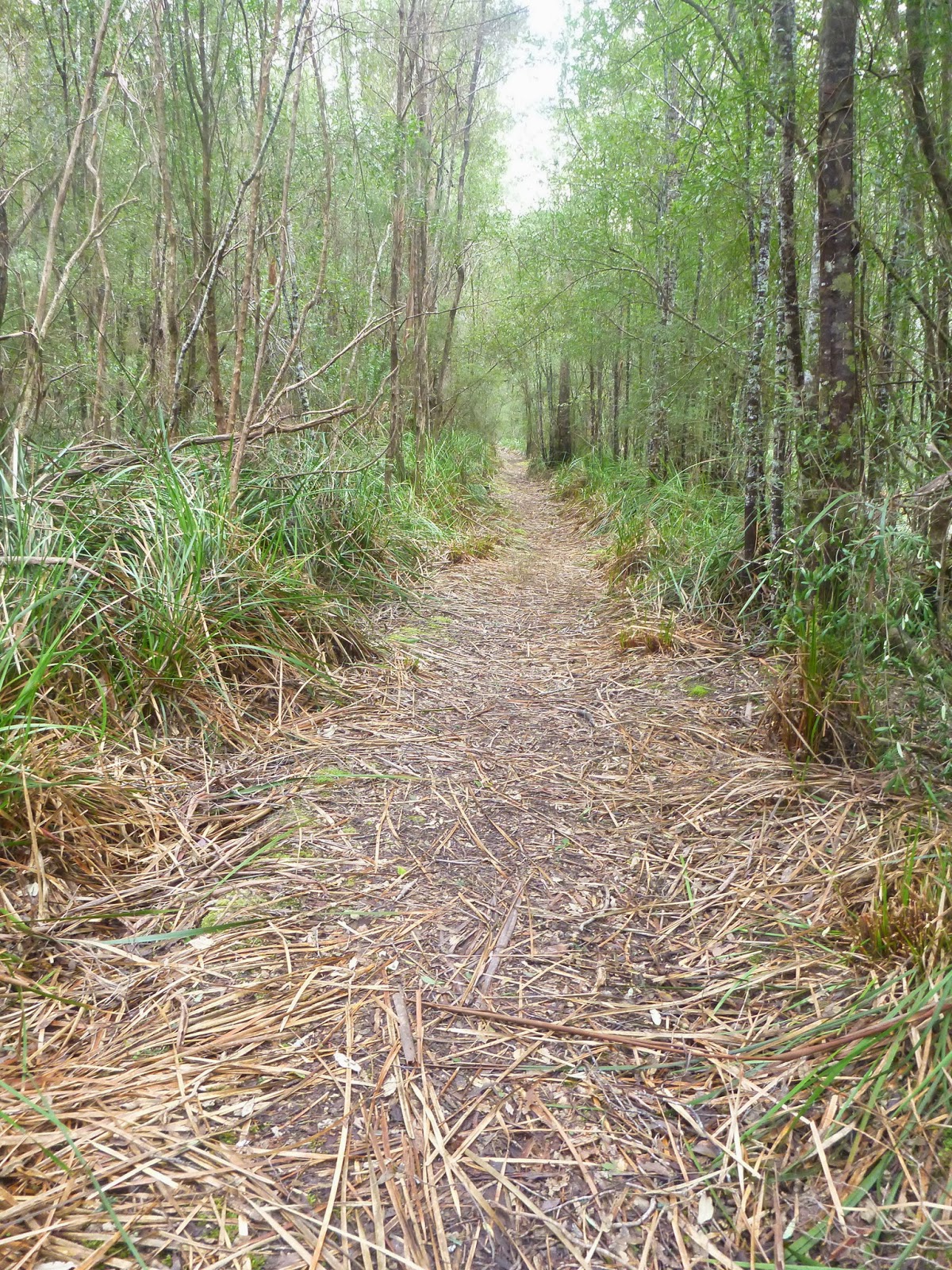 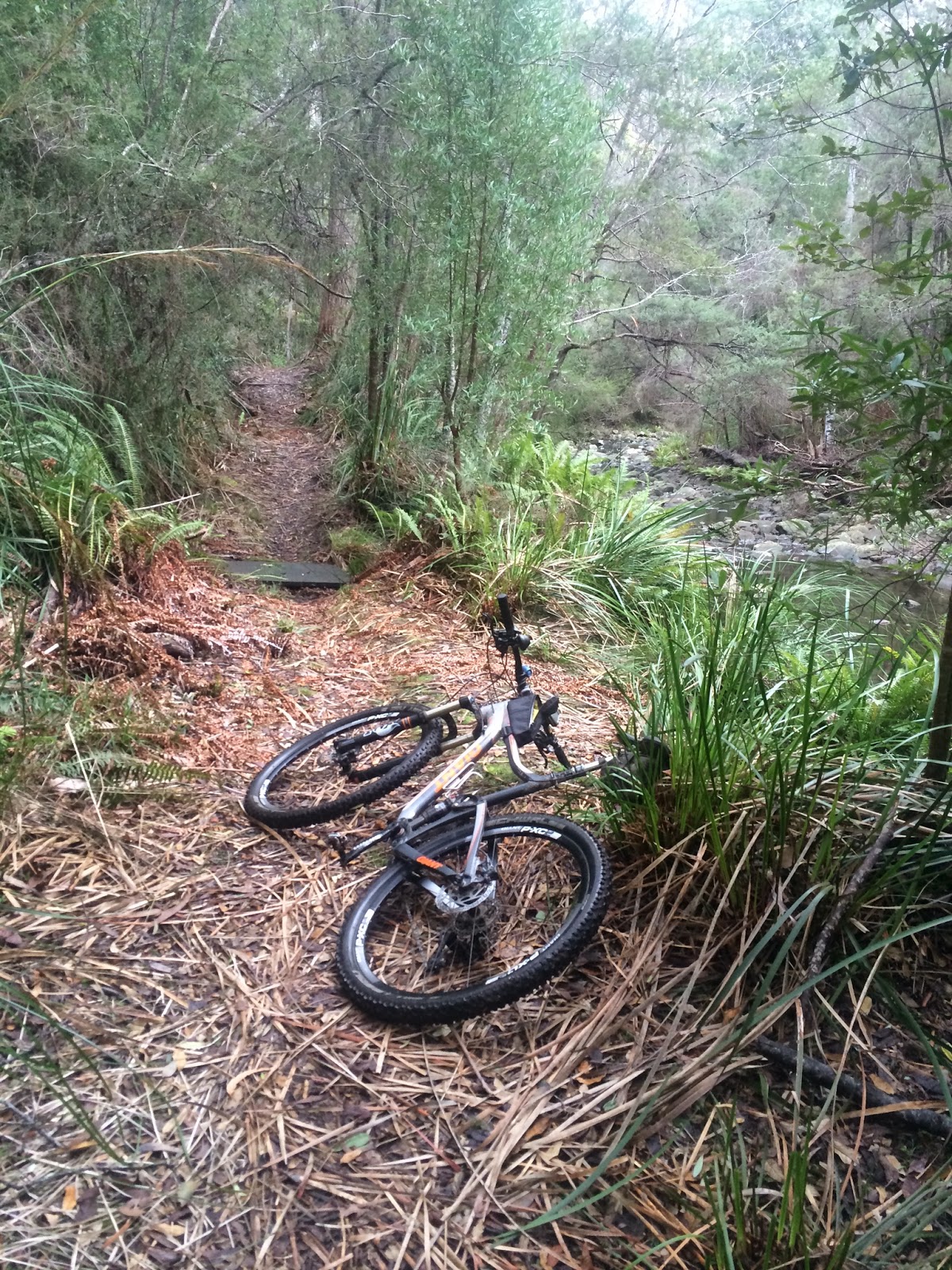 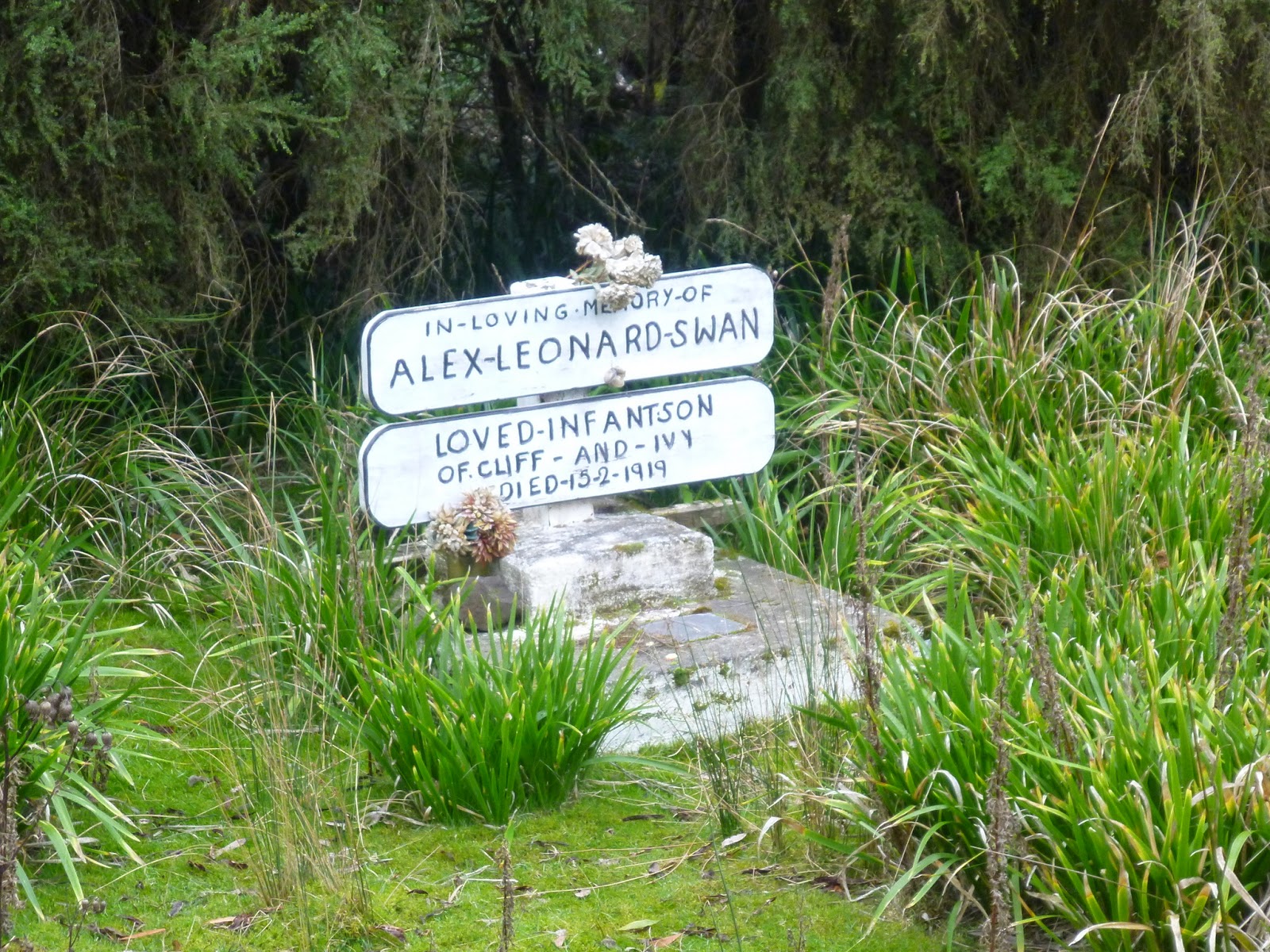 Or more correctly, it would be if:

(a) it were legal to ride a mountain bike there (it isn’t); and
(b) the track was cleared.

At the moment the tracks been cleared for a short way in from both ends (quite recently), but the bit in the middle is a tangle of overgrown branches and downed trees (though quite a few less than when I turned up with my little pruning saw) …  which only someone like me is likely to enjoy.

The other fairly amazing, and until now unknown, thing about this track is that it is currently being used for high tech experiments by the military (or maybe an advanced alien civilisation, I’m not 100% sure).

Take a look at this photo …

It looks like a perfectly normal wooden bridge doesn’t it?

But I swear it is un-passable.

These bridges (and there are quite a few of them on the trail) are so slippery that if you step onto them, you will make a puck on an air hockey table look like it is stuck in quicksand.

I almost broke my neck on the first one of these when I got onto it and my front wheel went one way, the back wheel went another way and I went ka-thump in the middle with a loud squawk.

A bit more cautious at the next bridge, I stopped to walk across it, put my foot on it and went ka-thump a second time (while my bike had a good chuckle to itself, just reinforcing in my head that maybe I really am going crazy).

After that I just did my best to shuffle or jump over these bridges very, very carefully.

Having thought about this deeply (and having listened to all the voices inside my head) the only logical explanation that I can come to is that the military is conducting experiments on creating super-slippery bridges to stop enemy forces advancing down walking tracks and they thought this was an excellent place to trial such devices (or that some advanced alien civilisation dropped some super un-sticky stiff here … but this seems slightly less plausible as I’m not sure why they would).

And you thought I was making up a tall story.

Anyways, this trail is quite short (4.6kms one way) but it a gorgeous blend of river-side and forest riding reminiscent of the best parts of the Cranky Penguin river section combined with a little bit of montezuma falls trail … and that’s an awesome combination in anyone’s books.

If it were open to mountain biking (again, let me be clear – it isn’t) then when combined with a steep climb back along Weilangta Road, it makes a lovely little loop (See blue line) with a lot to offer in terms of scenery that you can’t easily get around Hobart. 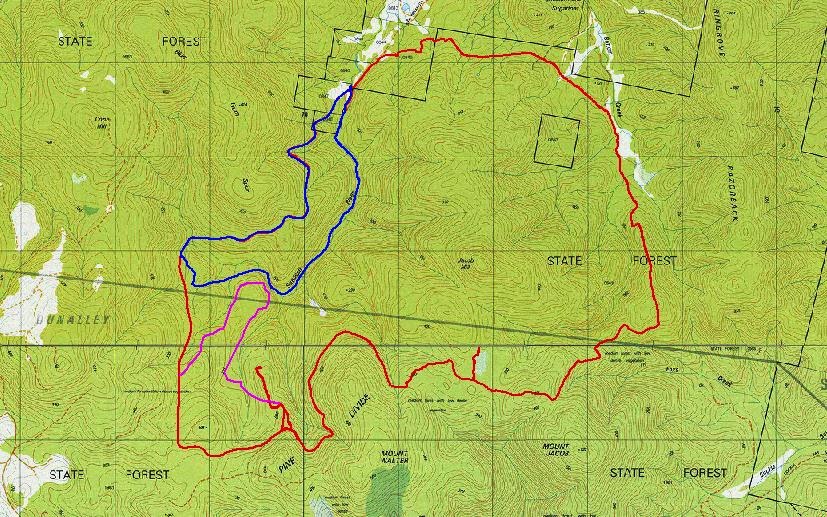 If only it were open to mountain bikes.

Which, if I haven’t mentioned it – it isn’t.

I would highly recommend going there for a walk though – but only with walking sticks and your super sticky soled shoes on.