I’m one of those people that tends to get introduced as a ‘cyclist’.

You probably know what I mean … you’re in a work or social situation and when introducing you, your friend or work colleague says something like: “This is John, he’s awesome, oh, and he’s a cyclist as well …“

Yep, that’s my life, and it’s OK, because I can kind of live with the awesome cyclist tag and furthermore meeting someone who may have ridden somewhere that I haven’t … especially if they have a GPS of their route that they’ll send to me … well that person can be my friend any day.

However, for the purpose of this post I also want to make the point here that I’m not just a cyclist (and although not entirely relevant, I’m never just  awesome either – that takes work).

Back to the point … if you monitored me for a week to see how I moved about, I’d firstly say you’re a very bored and/or pretty creepy individual who can’t be my friend, but then I’d also acknowledge that you’d see that I am primarily a pedestrian.  Cycling would come in a far distant second, or maybe even third after motoring.

It wouldn’t matter if you measured this by hours spent or time traveled … Cycling would always come second (motoring would win on distance traveled).

Which is a very long way of my introducing the fact that I’m going to have a bitch (albeit it an awesome one which is what saves this post) about something that is annoying me to do with that thing we all share as motorists, cyclists and pedestrians (yes, it’s called a road).

But in doing so I want you to recognise that I’m not just a bl*#dy cyclist having a whinge, I’m me (cyclist, pedestrian and motorist) having a whinge, and this is what I want to whinge about … all these new pedestrian road crossings that are popping up on our roads in Southern Tasmania.

I noticed in Margate a few months ago that they were building a new pedestrian crossing near teh school which was essentially closing down the cycling shoulder forcing cyclists out into traffic and I thought to myself “What a stupid design, I should say something about that” …

Then I forgot clean about it.

But then I was in Huonville this morning and discovered that they are building a flotilla of these things along the main road, and so this time I’m going to say something about it.

You see I’m not against building safer pedestrian crossings, in fact as a pedestrian I think they’re a really good idea, and in fact from a purely pedestrian point of view I’d say that these islands are a good design for the road speed and use, but (and it’s a big but) what I am against is poor integration of the pedestrian / cyclist / motorist interface and this design is (to me) the perfect example of how not to build roads that we all want to share. 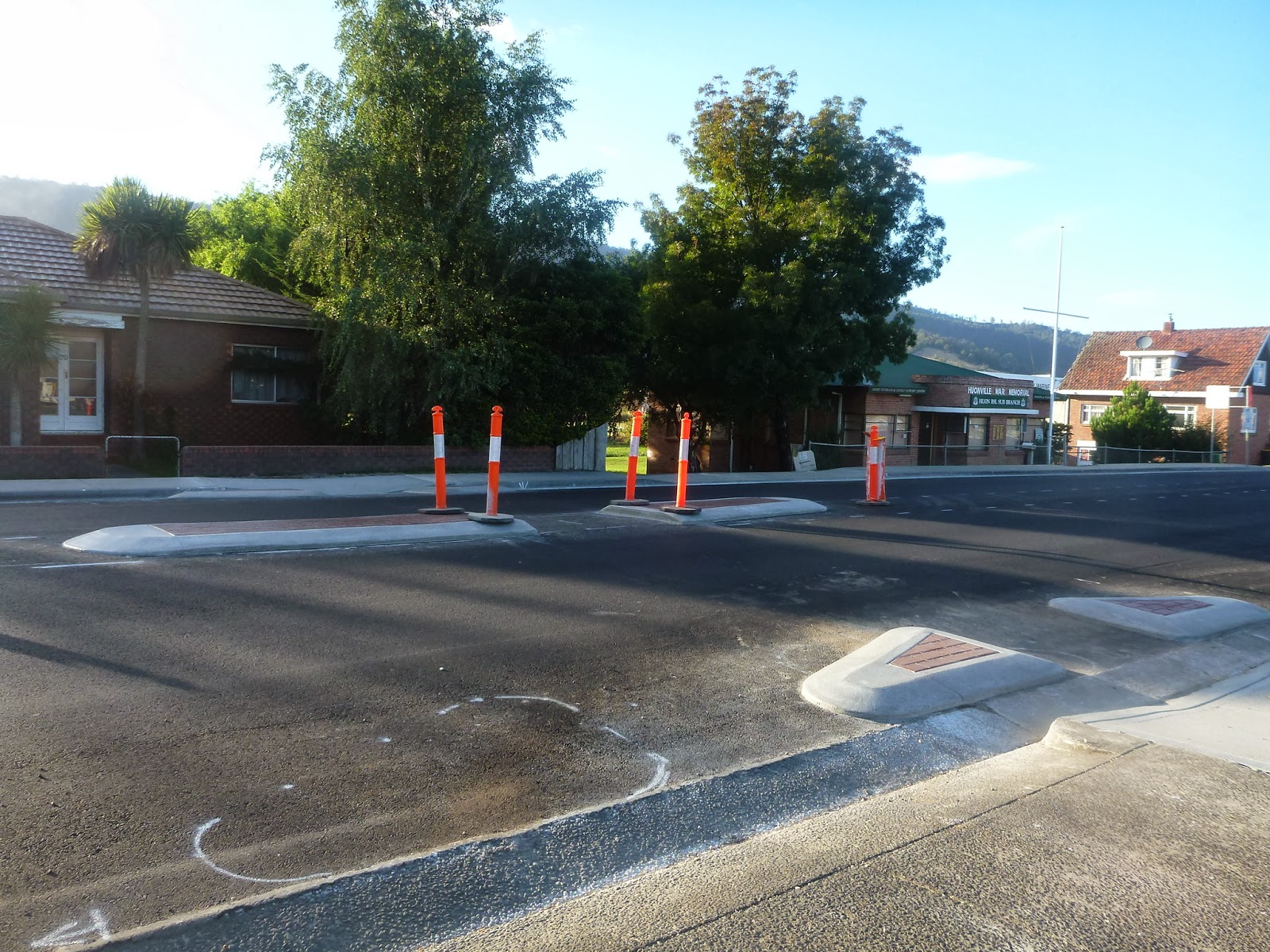 And I think that is really bad design.

Let me also explain why I can say “from my experience”.  Below is another example of this sort of ‘constriction’ design which I have to deal with every night on my ride home …

In this case ‘they’ redesigned the footpath to constrict the road just before the bus stop on Regent Street, which is a brilliant design from a bus safety viewpoint, but from a cyclists point of view it creates a whole new problem as I’m slowly chugging my way up a steep hill towards this point and any motorist that comes up behind me has this constriction blocked from their view (by me) and so wanting to get past they accelerate … and we both arrive at the constriction point at the same time.

I don’t usually win in these situations, unless you consider still being alive a victory.

I’m still waiting on a response, and although not as regular as in those first weeks I still have the odd close encounter, despite now checking everytime I get to this constriction point that no car is coming up behind me.  In this case it creates a second interesting conflict in that motorists are desperate to get in front of me before hitting the roundabout at the other side of the bus stop and so it really is a good example of how a constriction point to improve one safety issue has created an unintended user conflict between other users.

But back to the new pedestrian crossings in Margate and Huonville. I don’t have all ‘the answer’ to how to manage the risk of  getting pedestrians across the road safely and not creating a new conflict between cyclists and drivers, but I do have some thoughts on some options that I think could work  …

I’m not saying that these are the perfect solutions, and I’m sure there are complexities which I haven’t considered that will need to be dealt with, but what I am saying is that to me it looks like these issues aren’t being thought through and that by fixing one problem for pedestrians, we’re just creating a new one for cyclists.
And … something you might not yet have thought about yet … this not only sucks because it might get me (or you) killed or injured sometime soon, far more importantly this very issue may mean that next time I’m introduced to someone as “a(n awesome) cyclist“, rather than getting into a conversation about the new trails being built up at hollybank, or whether or not to get an early bird entry in for the Hellfire Cup, instead I’ll be whinging about road cycling infrastructure, and hence (as usual) will find myself soon thereafter sitting uncomfortably in the corner all alone wondering why nobody wants to talk to me …
Yep, we got get these roads fixed … my social life depends on it.