Now would probably be a good time to just post a few photos from today’s trip and then gloat about the fact that whilst most people probably spent today painting their walls or catching up with friends, I crammed a planned three day trip around Tasman Island into a single, perfect, wonderful day … 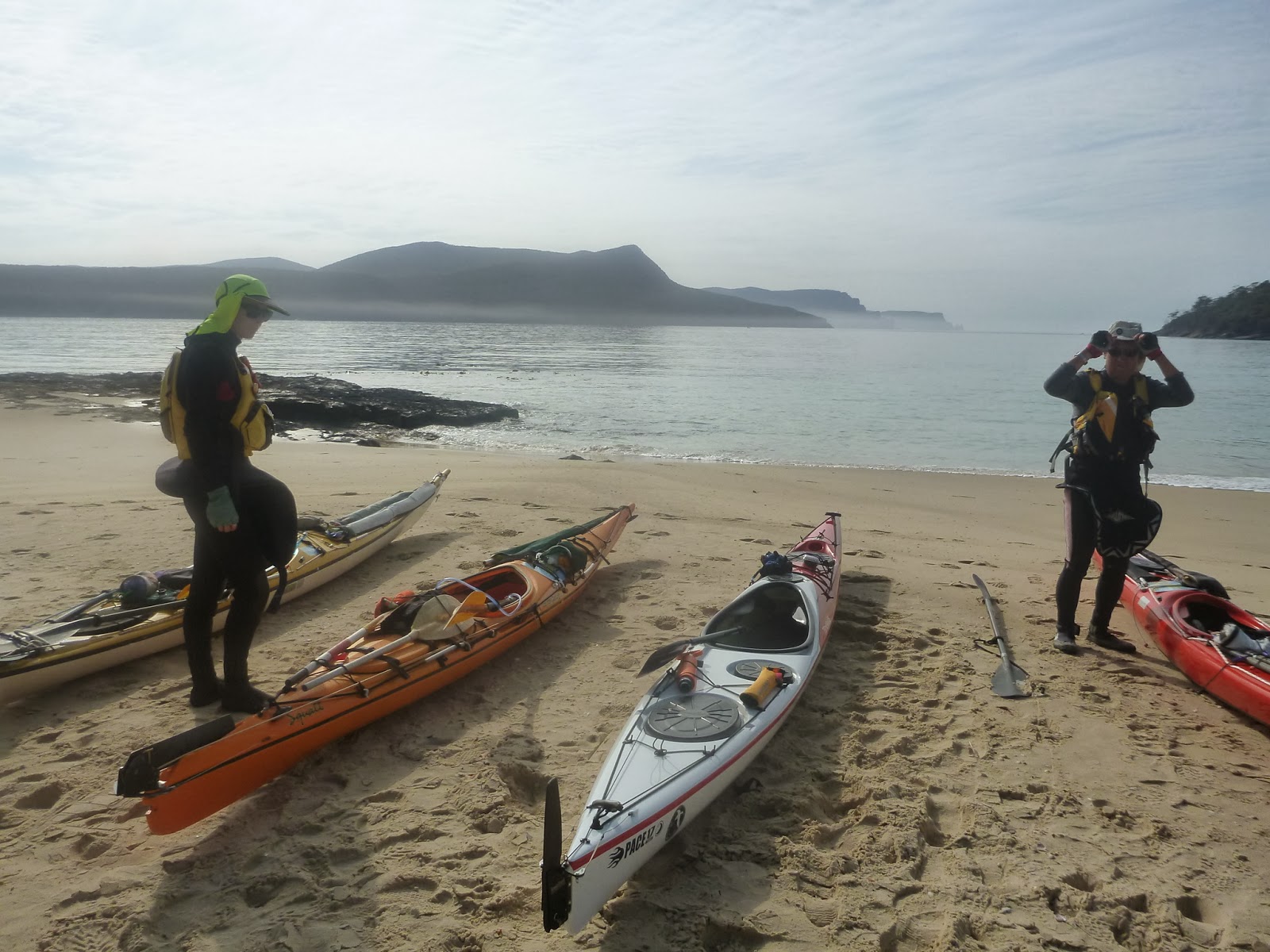 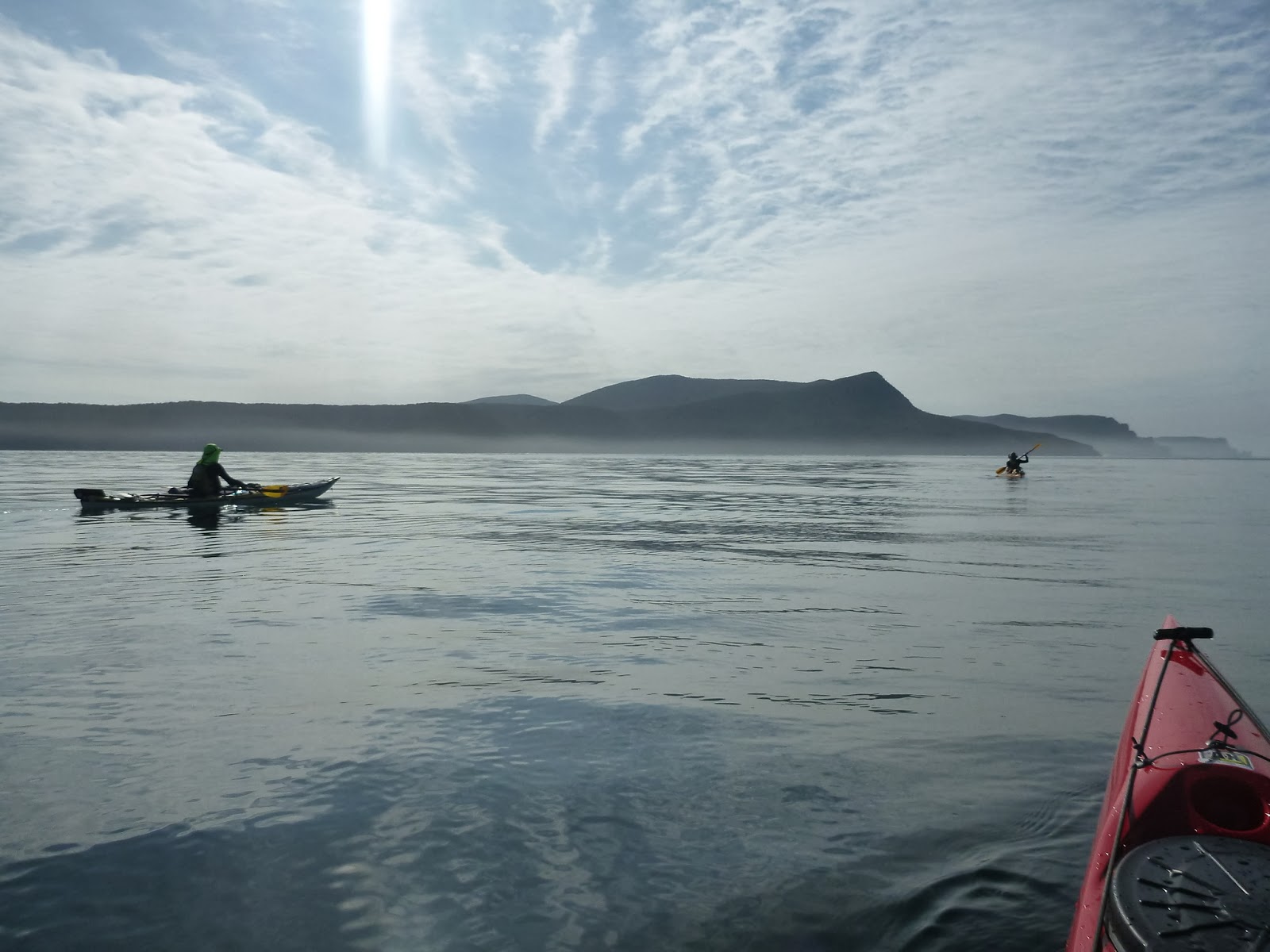 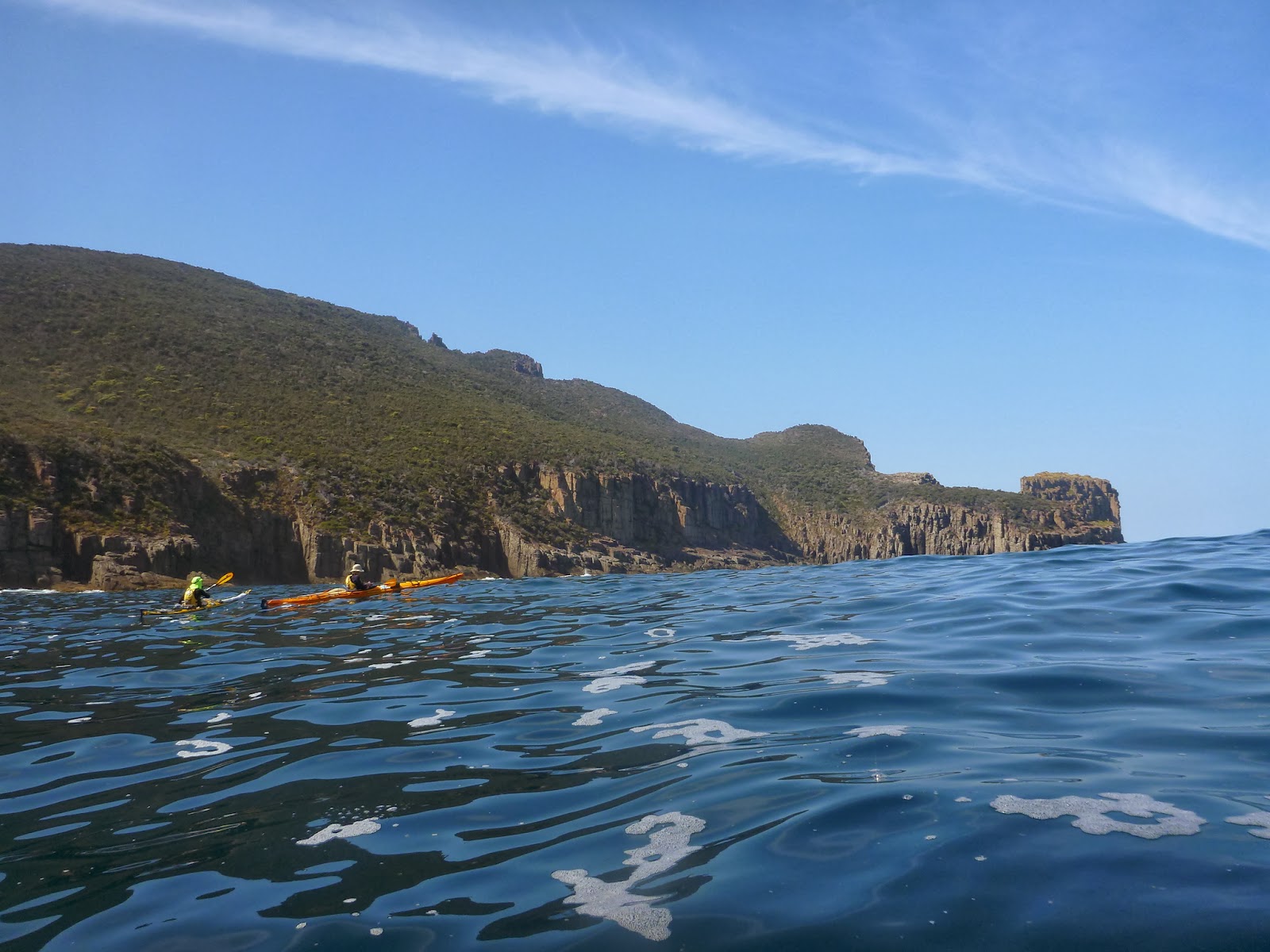 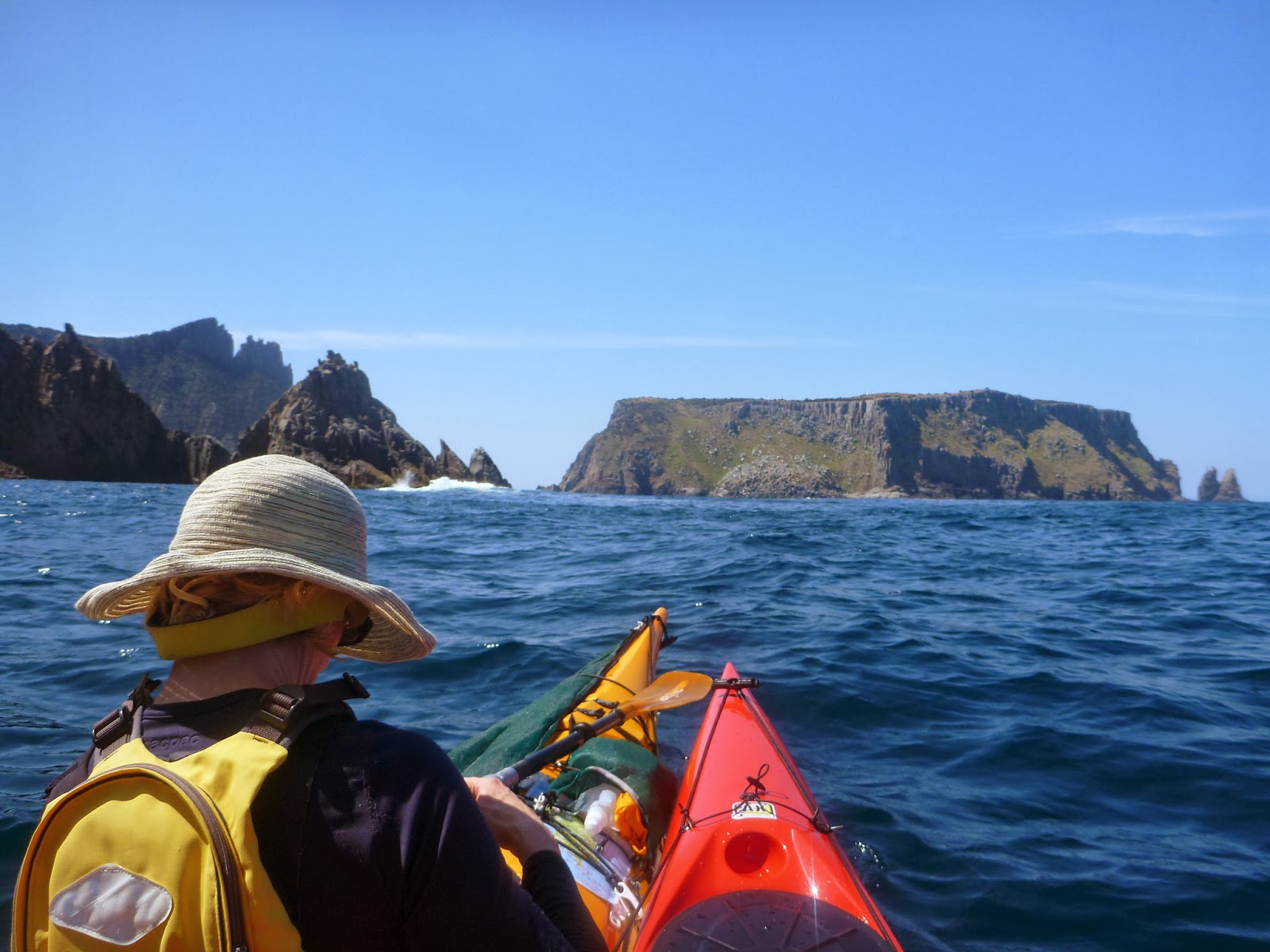 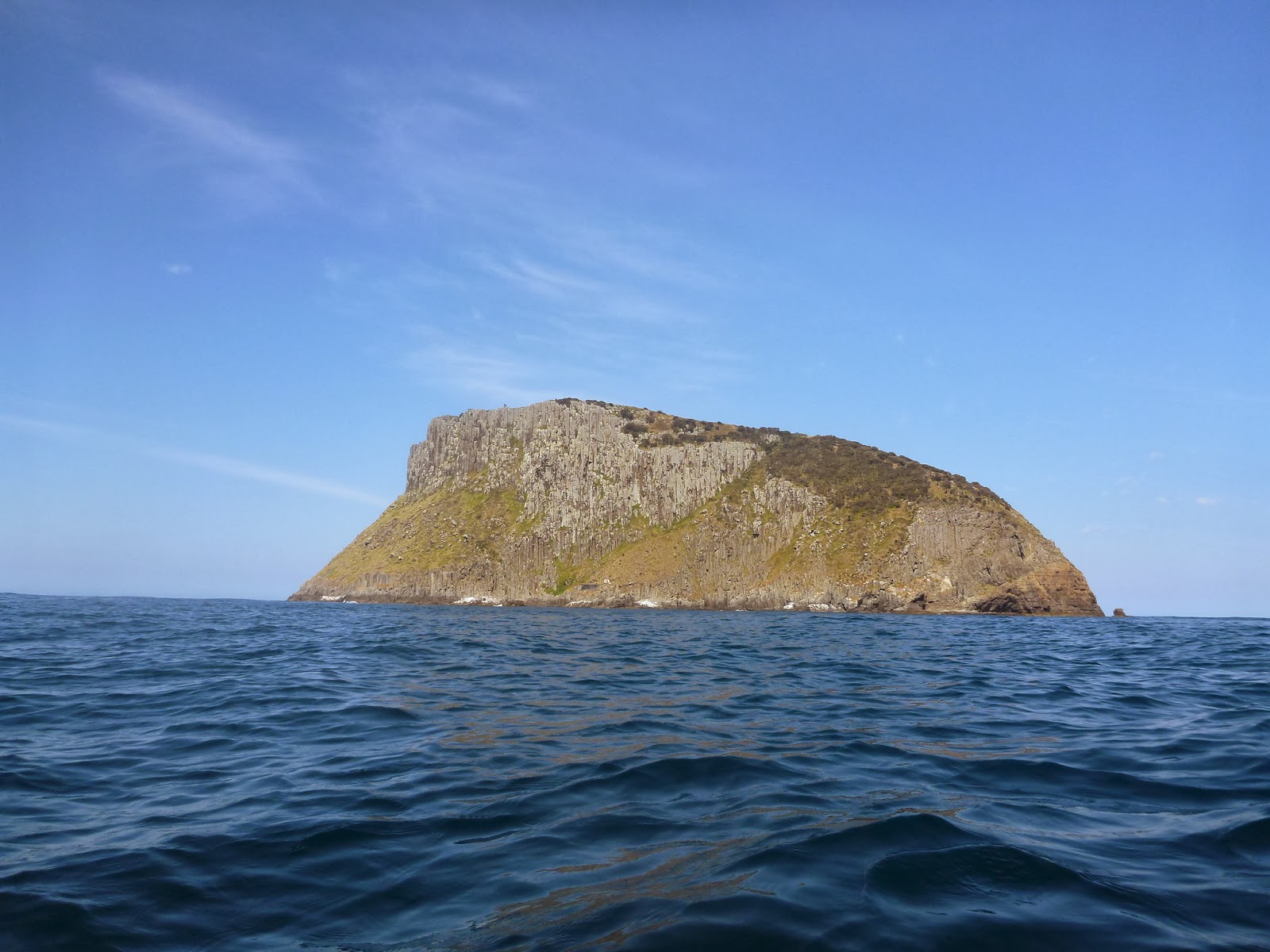 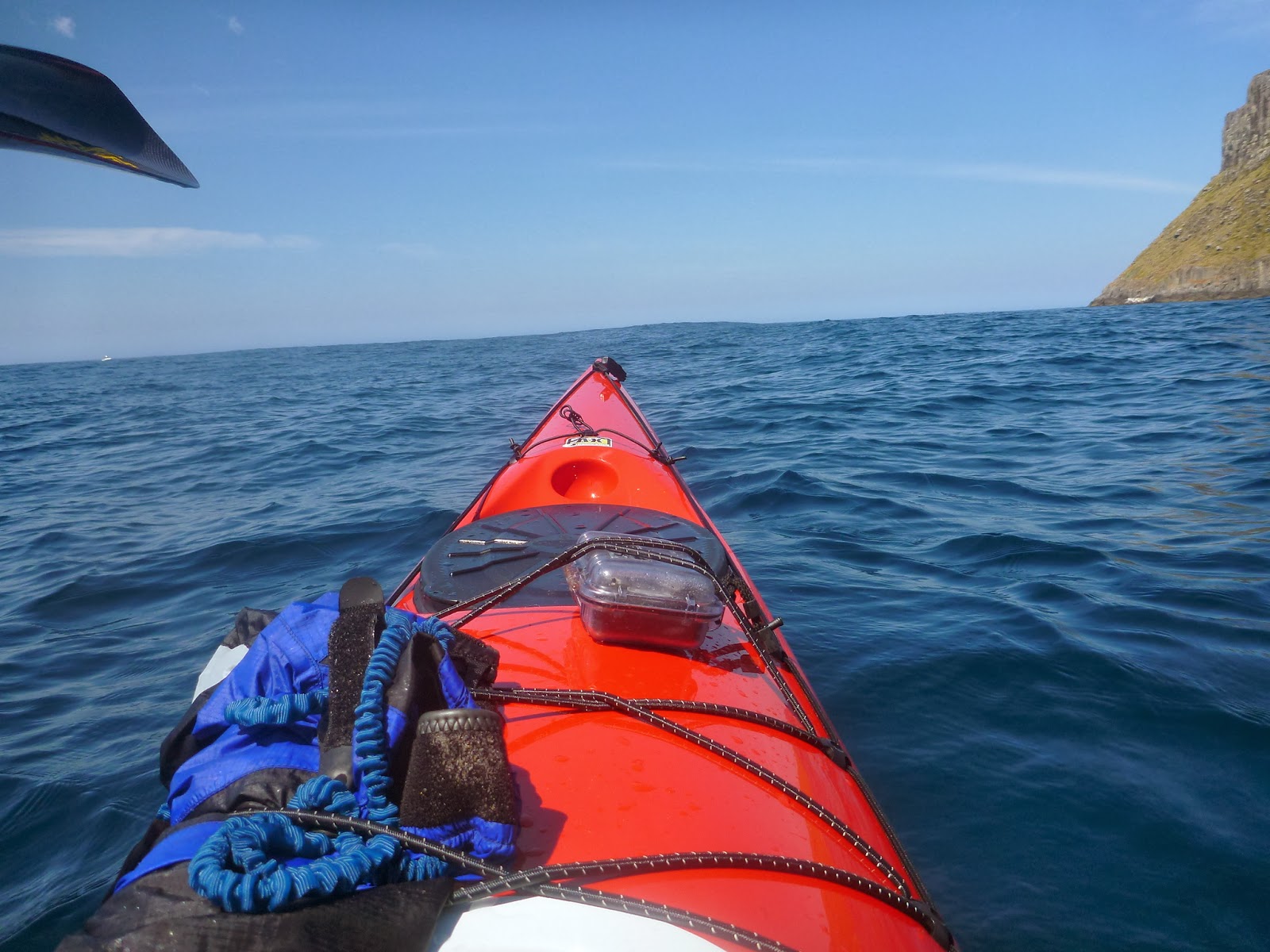 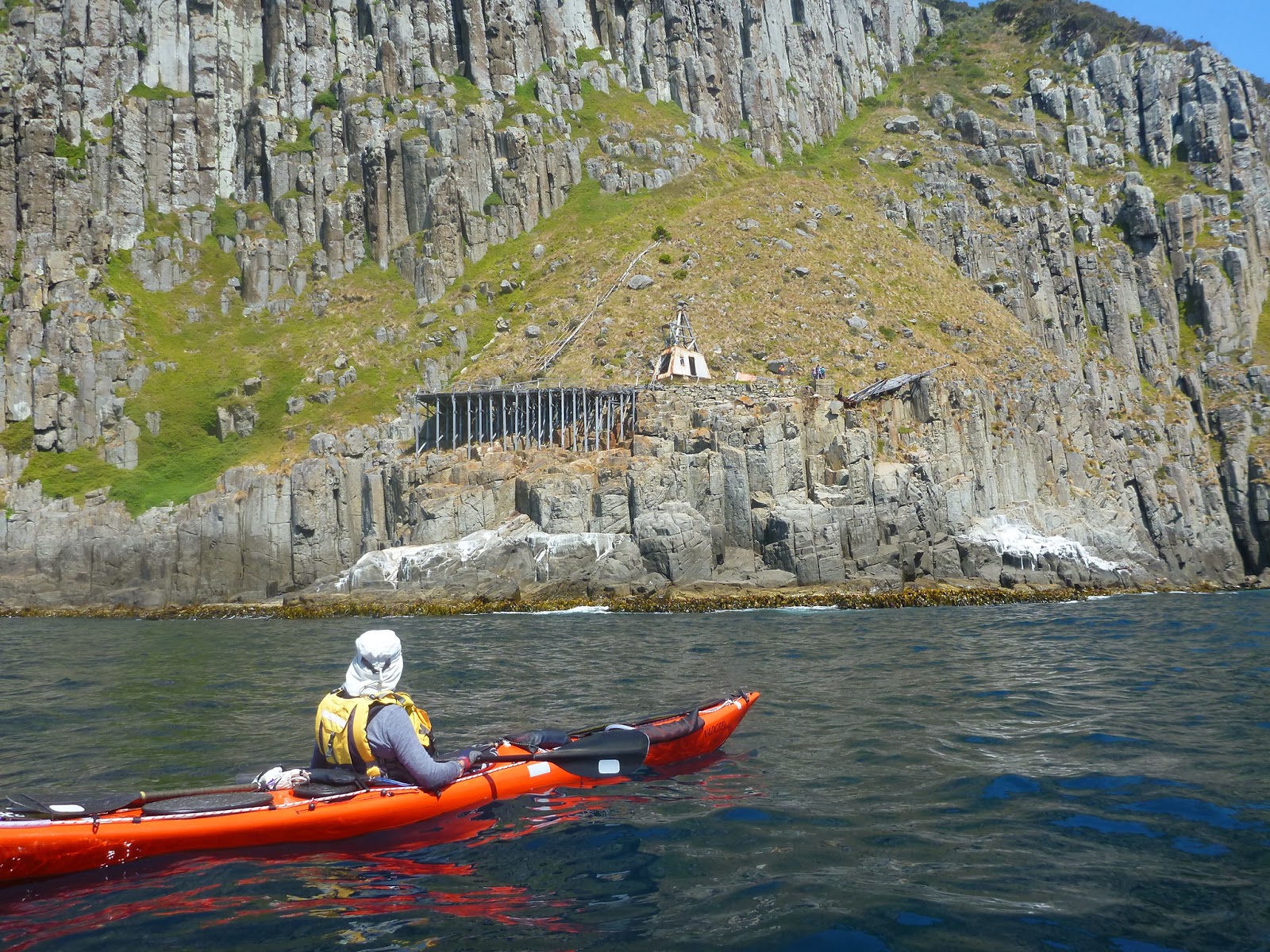 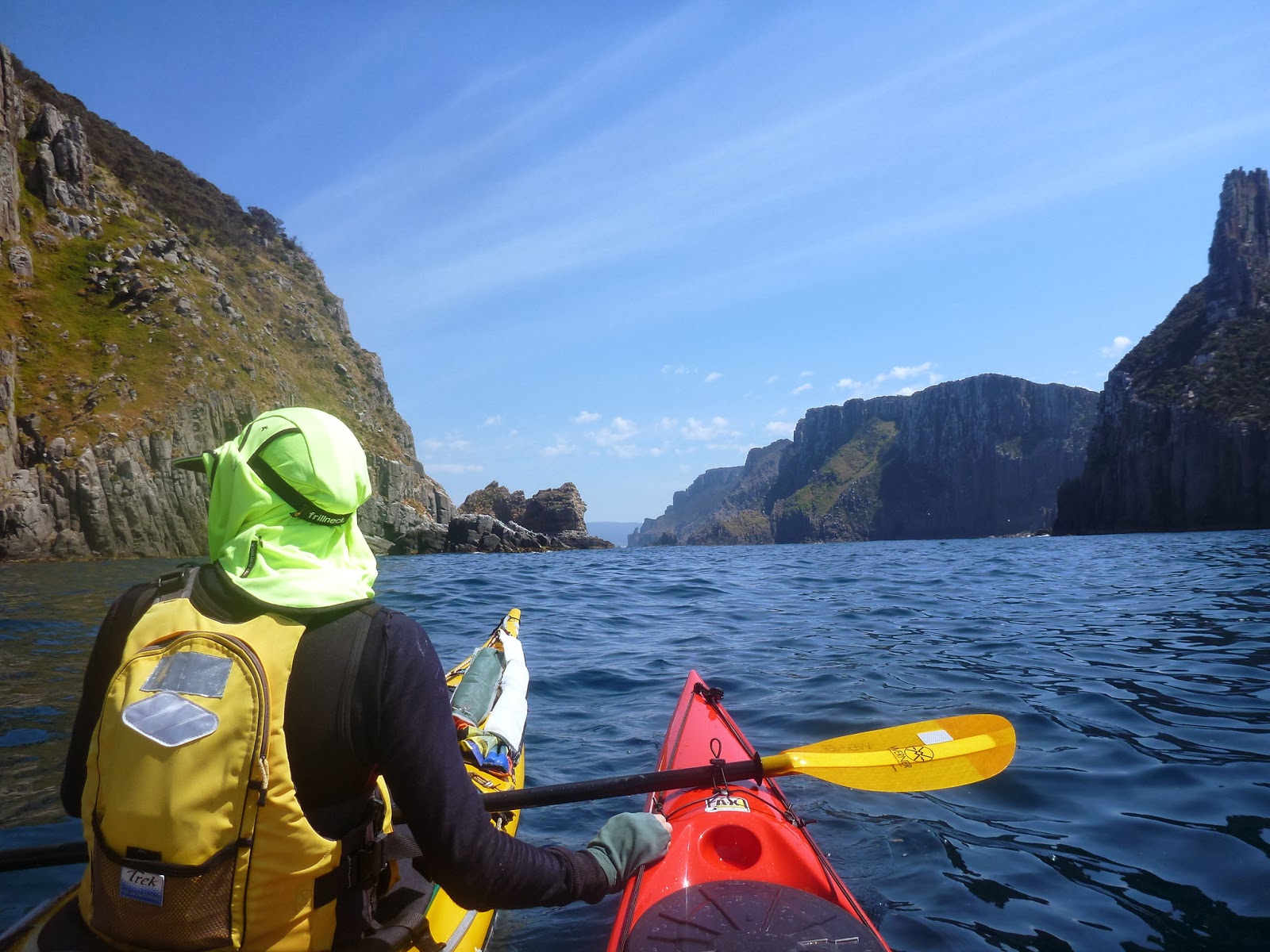 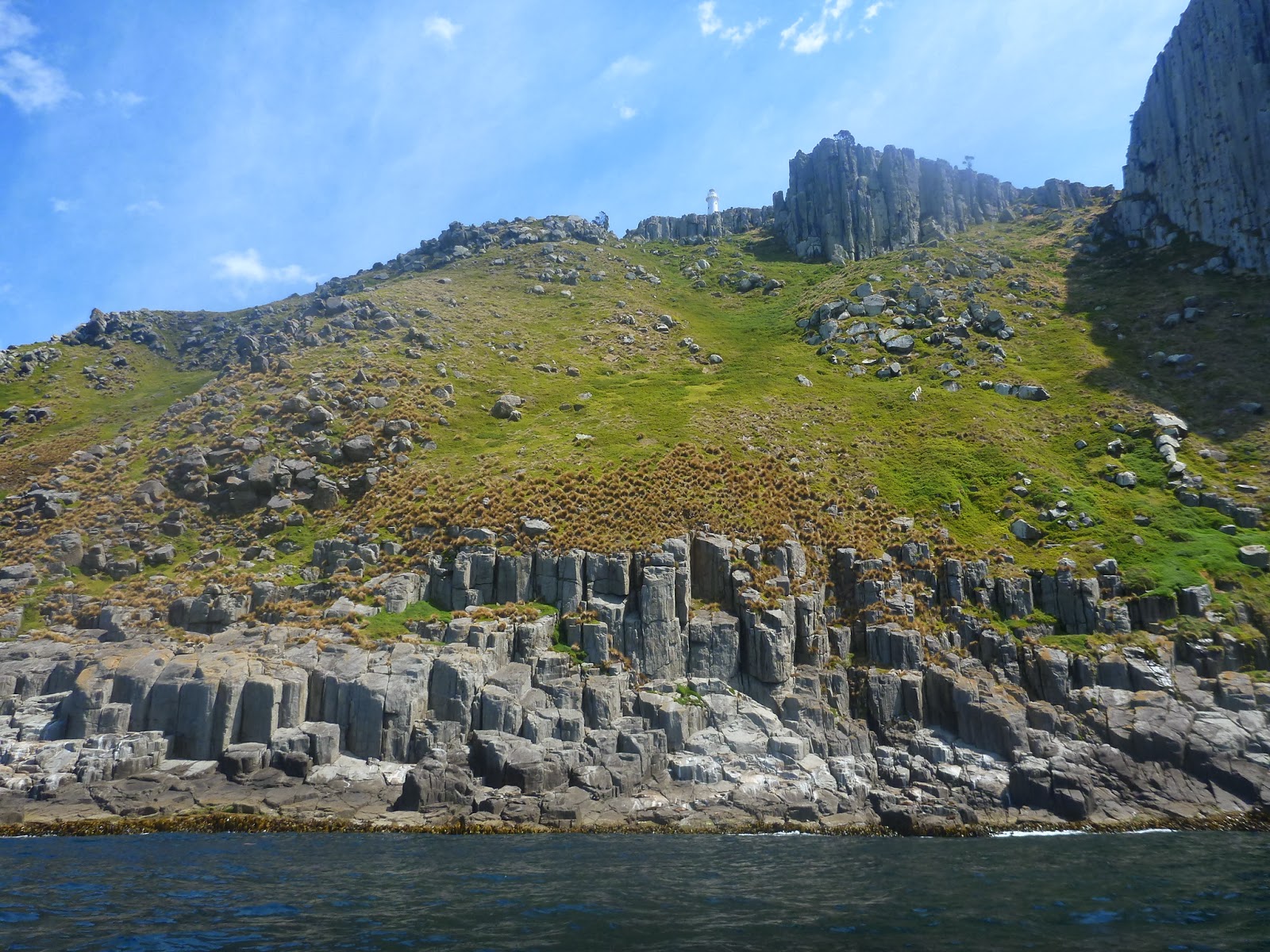 And it would end there with something simple like “Oh yea.”

The problem is if I did then I’d be glossing over an inconvenient truth … I was s#*t scared for a large portion of today and if I hadn’t been stuck in my kayak all day, I may have been inclined to metaphorically wet my little paddling pants a few times.  In fact so consuming was the scaredy scared bit of today’s adventure that I’ve even gone to the effort of colour coding my emotional balance from today’s trip and here it is …

Starting from the left, the first three kilometres were brilliant.  Flat, clear, seas and I was dreaming of a millpond cross to the Island. 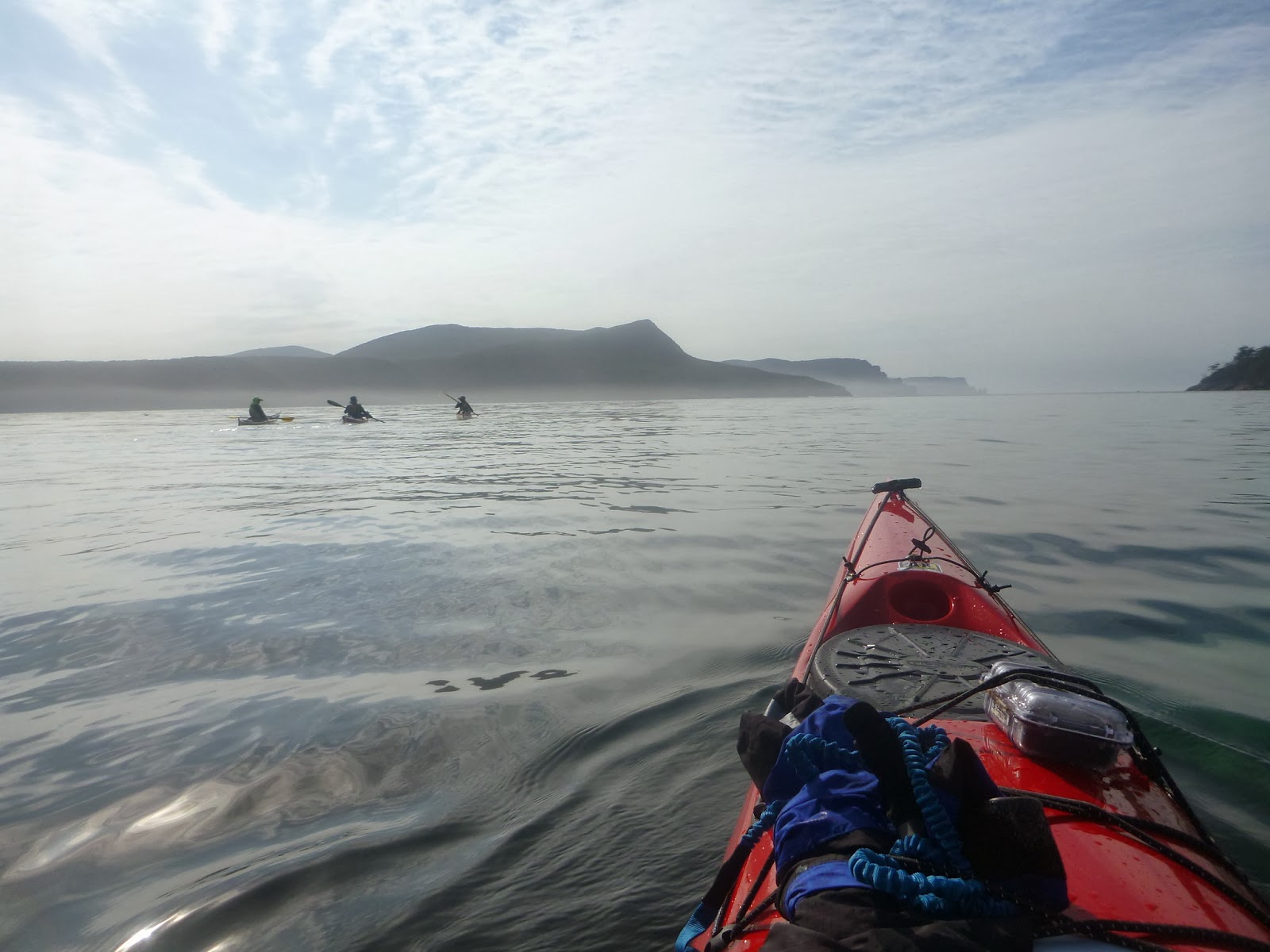 But then we got around Budget Point and into a nice swell and a bit of bounce and suddenly my beautiful Tiderace Pace 17 starting behaving very strangely.  It was like all of the primary stability, which I’d so loved about this little boat, had disappeared and every time I slowed down or stopped, I found myself constantly dipping my paddle into the water to maintain my balance and staying upright.

This was not so brilliant, and although I was really enjoying the paddle out to the Island, I was on a much higher level of alert (blue line) than I expected or would otherwise like to have been … to the point that I had to raft up with one of the others if I wanted to take a photo.

But then we got to the gap between Cape Pillar and Tasman Island and the wind and swell almost died away and we got to spend 45 minutes floating around on the water watching the seals playing and sunbaking, two sea eagles flying above us, and of course the high sea cliffs all around us as we ate our lunch (on the water) and felt like four of the luckiest people on the planet. 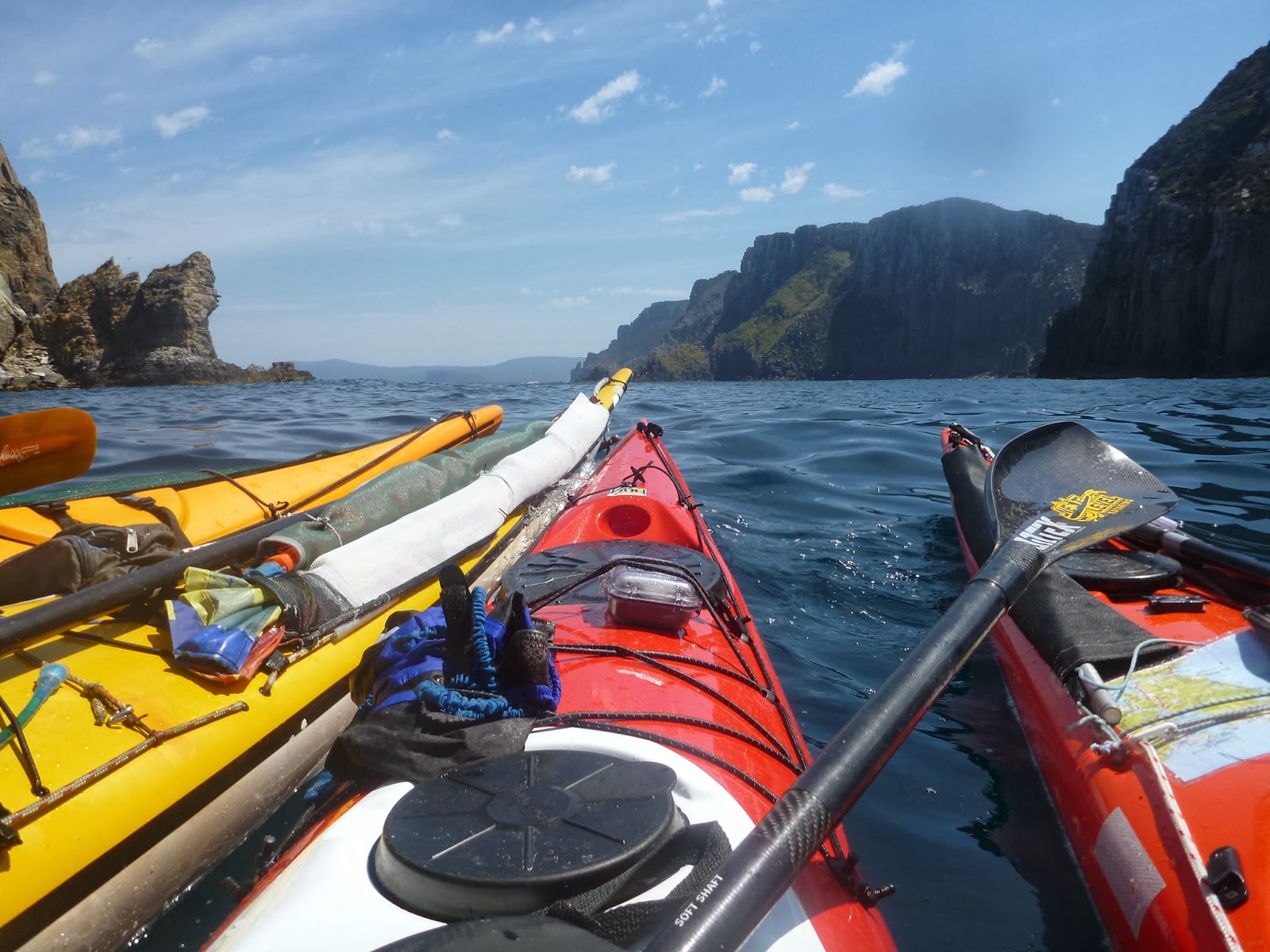 After lunch we continued on around the Island and again the extra bit of swell put me on blue alert as we paddled down to the the far southern point (The Monkeys) of Tasman Island.  Then things changed and not for the better.

The forecast easterly wind change started coming through and my boat suddenly felt far more skittish on the water than I had ever tasted before and I found myself in an uncomfortable predicamemt where to stay stable I needed to paddle ‘strongly’ so that my natural forward motion and strokes could keep me balanced, but if I did this then I quickly outdistanced the others I was with and so I spent a lot of time just running my blades through the water as support strokes trying to maintain balance whilst shedding speed.

We eventually finished out circumnavigation of the island and turned for home.  Jean, Jen and Allan all put their sails up and I thought this would finally mean I could get into a more comfortable rhythm as I tried to keep pace with them, but again my boat surprised me as the easterly winds descended over the cliffs and hit the water, picking me up from the side and skittling me sideways across the waves and swells meaning I constantly had to fight to stay near shore.

I’m just being honest when I say that for most of the paddle back towards Black Head I felt like I was fighting the seas and my boat to stay upright the whole way.

Someone reminded me the other day that it’s good to learn just outside you comfort zone – in the 5 to 7 out of 10 ‘discomfort’ stage.  I’d say the blue line were the 5-7 stages today.  Those red lines were 8’s or 9’s out of 10 where fear of what’s about to happen shuts down the learning and experimenting process.

However just before Black Head, I paddled in toward shore more and got in the lea of the cliffs (genius aren’t I – only took me an hour to figure that out) wherein my confidence rebuilt and so when Jean suggested that we just head straight across Haines Bight to the yellow cliffs (Tornado Ridge) in front of us I readily agreed … and then regretted it the whole way across.

Seriously, I was so close to swimming so many times going across that bight that it wasn’t even close to funny (or fun).  The wind was just picking up my Pace and pushing me sideways down and across waves and what was even more annoying was this fight I was having between being 100% alert and attentive … and really feeling like I needed a nap right about now and struggling to keep my eyes open.  Quite surreal.

It was somewhere going across this section, as I was struggling to figure out why the boat was feeling and behaving so differently to what I was used to (my initial thought being that maybe the gear that I’d thrown in the back of the boat had lifted the front causing more weather cocking) when the realisation hit me that of course I’d lost 10kgs in the last two months, and this could at least in part explain why the boat was feeling a lot more ‘toppy’ and unbalanced with the primary stability (the boat would be sitting higher in the water).  This would also explain why it was still offering me a lot of secondary stability (yay) when I got to that point.

It seemed horribly ironic at that point that losing weight might end up drowning me.

Once across the bight, it was a much more settled paddle back around to Budget Point and then once around there the swell dropped out completely and suddenly my boats personality completely changed back to the friendly, playful beast I knew and the sad realisation hit me that whilst my weight difference may be part of the explanation … the rest is just that I’m not comfortable in bouncy swell. 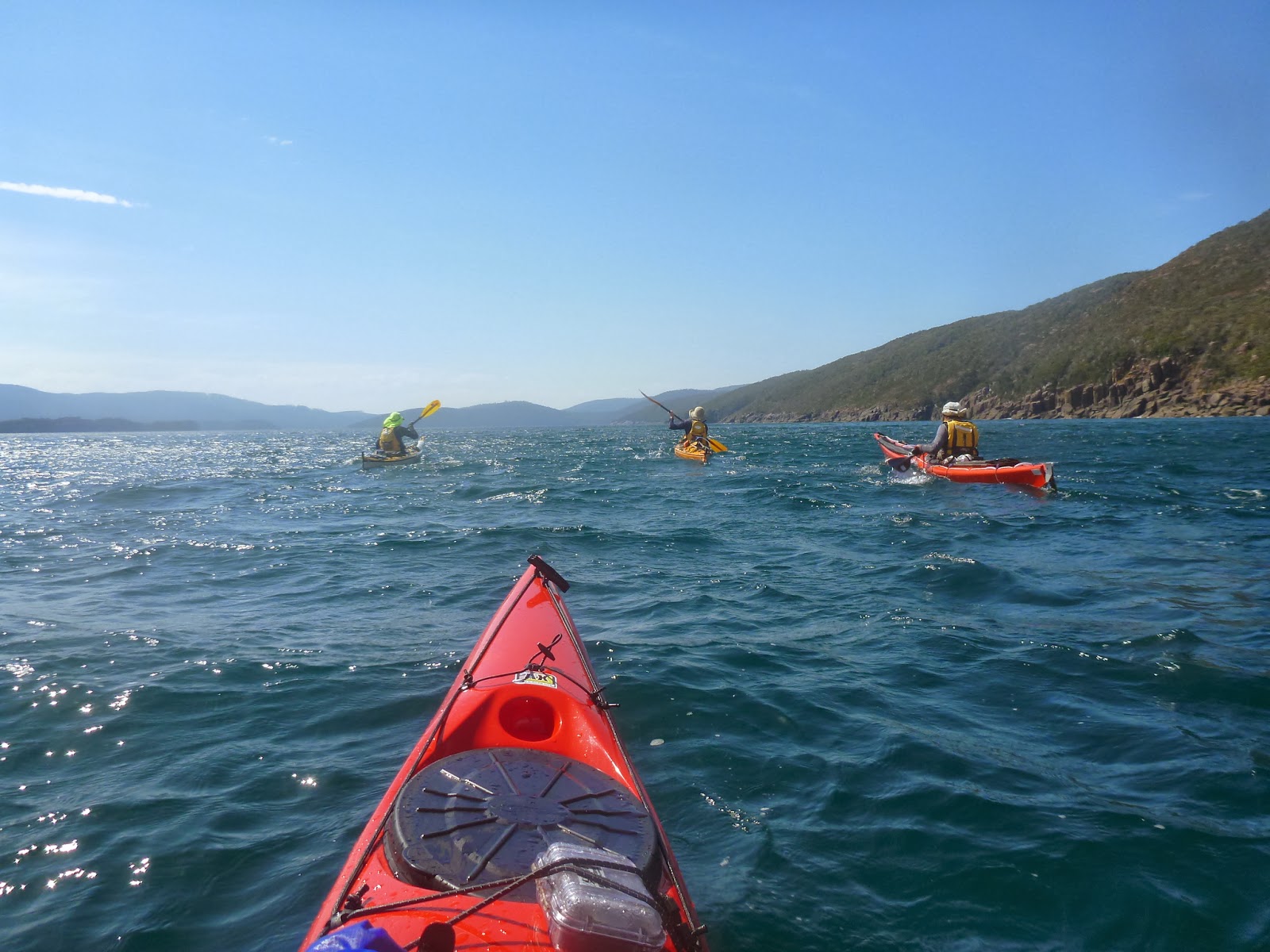 Damn it, I much preferred the “it’s all the boat/diet’s fault” explanation.

After paddling up the coast a bit (to get a better angle with the wind and waves) we had a hoot of a run back across Safety Cove to our launch point where I managed a perfect landing through the small surf only to find myself unable to get my legs to work enough to actually get up out of the boat, instead falling over in front of a group of 10 onlookers and getting washed out of my boat. 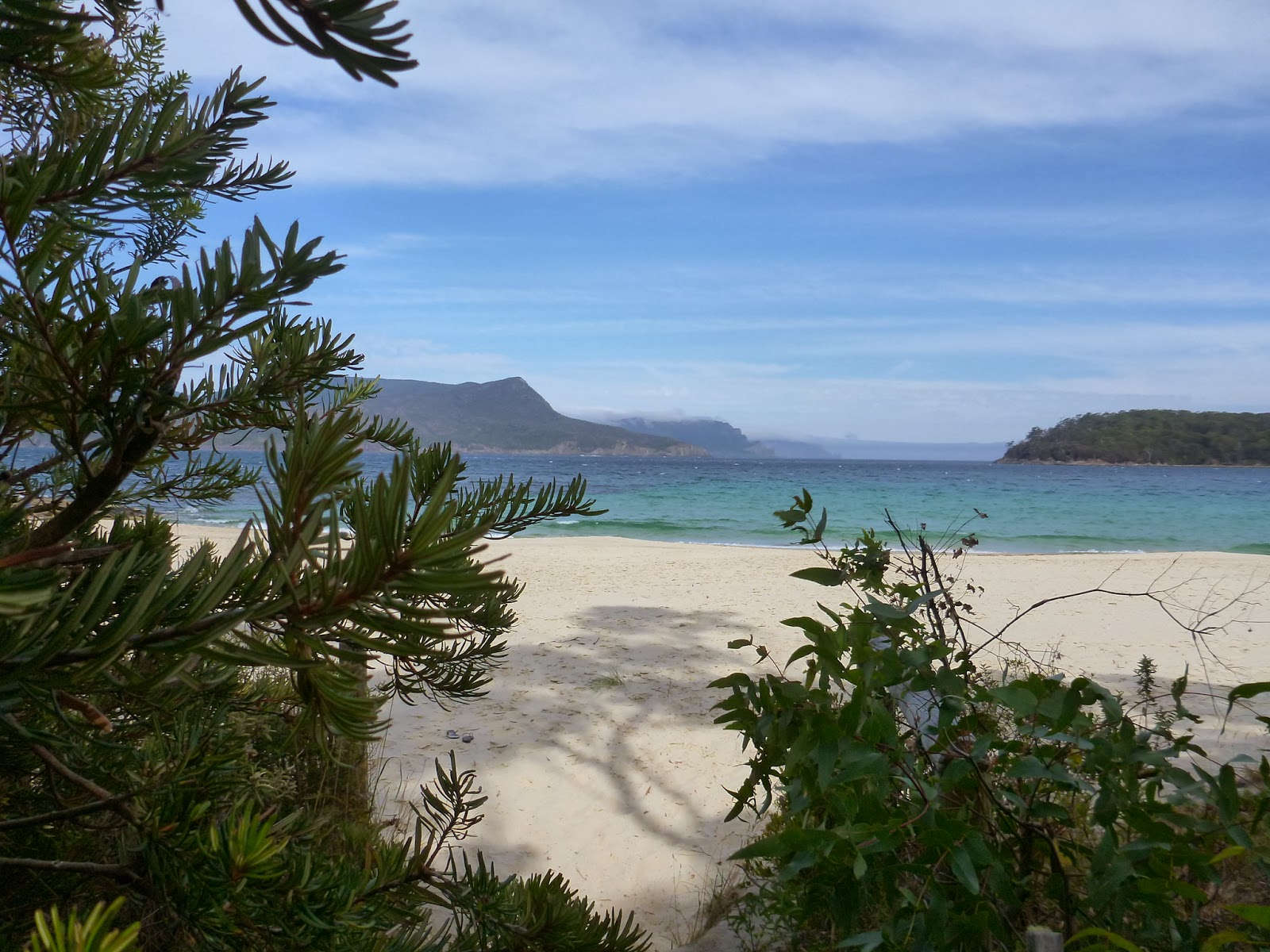 Still I was on shore and I’d made it.

Our return trip from Safety Cove to Tasman Island and back was 36.7 kms and we spent 6 hours and 30 minutes on the water (yea, a long time between pees, believe me).

As I looked back at Tasman Island it was obvious that the seas were continuing to build and a sea mist was slowly encircling the island.  We’d been amazingly lucky with the weather today.

But still I did something amazing today, and as I sat at Murdunna eating a Valhalla Ice Cream and guzzling a coke I couldn’t help but think how incredibly happy I am to be me … which means you could probably just have stopped reading this back after that first set of photos.

====
NOTE:  This was a Tasmanian Sea Canoeing Club “proficient” graded trip.  We had three very experienced paddlers (plus me who is trying to get up from “Strong Basic Skills” to “proficient”) on this trip.  We had spent a lot of time examining and discussing weather conditions and routes prior to the trip, we had full safety gear (VHF radios, EPIRBs, PLBs, smoke and laser flares, phones, paddle floats, spare paddles, etc. etc.) we had a well structured float plan in place and a spot tracker sending off our location every 10 minutes, we all could roll, self and team rescue … hopefully you get the idea.  Don’t read this and think “I could do that – or else you’ll end up feeling like I did out there – out of your depth).