I have (yet another) confession to make.

Specifically I steal other people’s ideas for rides.  Yep, if I’m following you on Strava then although I’m mainly doing it because I think you’re an awesome or interesting rider, there’s also a part of me that’s always hoping you’ll head off somewhere that I haven’t been too so that I can steal that route idea from you and ride it myself. 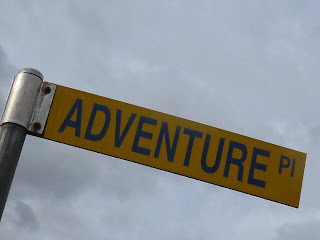 True story. I’m evil and I steal your ride ideas.  I don’t think I’ll get much strava kudos for that.

Today, it was Oliver Walters turn to have his local rides stolen from him.  Insert evil laugh here.

Sorry mate, but I’ve been watching those trails you’ve been riding for too long now, and with a couple of hours up my sleeve this morning before I had to meet Kim and the Monsters for the Santa Run at Kingston Beach, I decided a bit of an early morning ramble from Margate to Snug was in order. 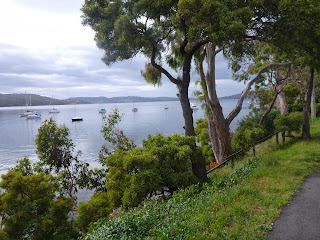 Now as this was a last minute decision on my part, I unfortunately didn’t have the time to download any of Oliver’s tracks onto my GPS, but I figured if I just rocked on down to Dru Point and started riding it would all turn out OK (I did actually know quite a few bits of these trails being a born and bred Huon boy myself but hadn’t been on any of them for over a decade).

So I started the ride by heading out along the Dru Point Reserve which runs along the foreshore before coming out behind the Channel Christian School.

I had one of those extremely unfortunate (and embarrassing) accidents here when I slowed down to read a sign at the end of the Reserve, went to unclip my right cleat, only to find the cleat was loose and wouldn’t unclip, and before I had time to regain my balance I was doing one of those stationary sideways falls onto the road that every clipped in cyclist dreads.

I managed to slam my knee right into the gutter and spent a few minutes after that feeling rather nauseous and sorry for myself.   In hindsight maybe this was karma getting back at me for my little theft this morning? 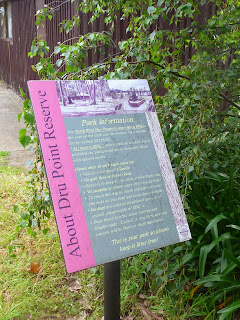 Anyway, I won’t bore you with the blow by blow details of the rest of my ride (this is after all meant to be a brag blog about my brilliant theft, not a route guide), but I will say that I was surprised at how easy it was to knit together a lovely (and as far as I can see legal) series of trails (Dru Point, Dave Burrows Walk, Peggy’s Beach Foreshore Trail and the Snug River Track) with a few quiet roads and trails to make a great mornings ride. 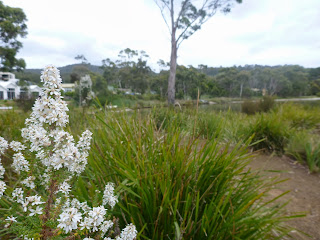 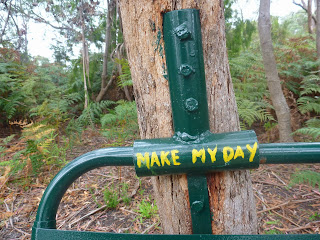 In fact the only other thing (other than my crash that is) that slightly marred the morning was that I was happily mashing my way up a strava segment on Slattery’s Road when I got a text from Kim that they were at the beach and she was wondering (politely of course) WHERE WAS I?

Appears I may have got a little distracted and lost track of time.

Not wanting to admit this, I assured Kim by return text message that I was just 20 minutes from my car (then changed that to 30 minutes to give myself some wiggle room) and promptly turned around and took the quickest route back to my car …  until I couldn’t help myself and diverted back down to ride the Dave Burrows route in reverse.

I seriously have no ability to prioritise, but at least I had the forethought to give myself that extra 10 minutes meaning I still managed to get back to my car, and ultimately the Santa Run with plenty time to spare. 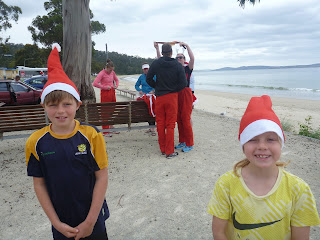 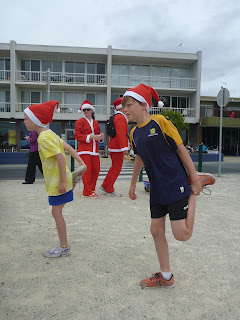 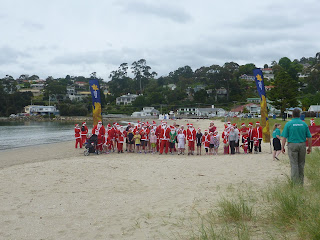 Hopefully my efforts behind the camera will make up for my little trail thefts earlier in the day and Santa will still give me some new toys to play with at Christmas.

Can you believe it’s just 11 days until Christmas?