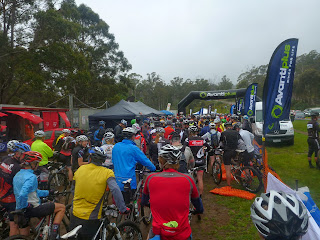 … if you accept that by awesome I mean that stage one was some of the wettest and muddiest riding I’ve ever raced in and that they had to cancel stage 2 (as well as move the entire tent village to another location) because of the wet conditions. 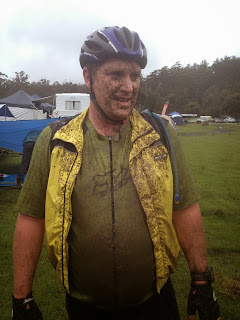 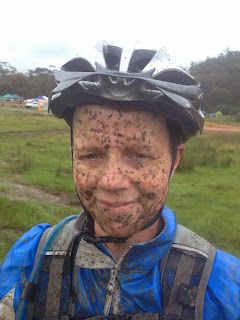 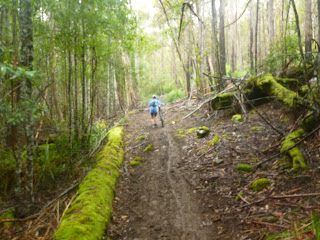 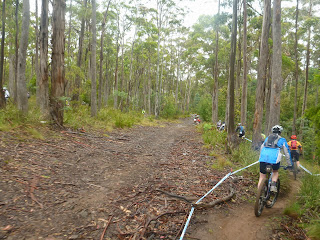 Today was also a lesson in humility (and suffering) for me as Kim and I headed around the circuit together as a team.

You see there was a time (not so long ago) when I was a faster rider than Kim, but that time is no more.

Today Kim emphatically proved that she is now the better, faster (and I’m sure she’d say awesomer) rider than me in every respect, and as her penance for usurping my crown, she spent much of the day sitting around waiting for me to catch up as I rode on my threshold nearly all day wishing she’d slow down a bit.

Yep, here it is in writing: today Kim was awesome, and I most definitely was not.

But that’s OK, because life has its ups and downs, and today was another good reminder that I need to change my life trajectory a bit and start heading ‘up’ again and that’s a cool lesson to learn from a mountain bike race.

After the race finished we decided to duck back to Kim’s house to grab our Gazebo (which we’d accidentally left behind) and when we returned to the tent village a couple of hours later ready to settle into an evening of idle relaxtion, we instead found that the whole tent village was packing up and moving out to higher ground.

While I understand why this had to be done, the downside was that after setting up camp once already, and with wet camping gear and a real question mark over whether there would be a second days riding, pretty much everyone we knew was heading back to Hobart for the night and we quickly decided to do the same.

As I write this, there is indeed a second days racing going ahead (in fact it started three minutes ago) but the course route sent out late last night appeared to be largely a repeat of yesterdays route, just with most of the single track cut out and a new section along Weilangta Road added in.

With Kim already feeling a bit under the weather with a bad cold, and neither of us being particularly motivated to spend a day riding primarily gravel roads in the forecast rain, we’ve decided to pike (making it a very expensive 2.5 hours of riding) and so Kim is snoozing on the couch and I’m sitting on my laptop typing this blog.

Meanwhile, despite the ominous forecasts of heavy rain today, outside my window there is nothing but beautiful blue sky …