Skip to content
So when I signed off on my first post about the Hellfire Cup, Kim and I had come home after the afternoon stage of day one’s racing had been cancelled and we hadn’t headed back down the next day because we were so sure the event would be cancelled (or so seriously re-routed to not be worth riding) due to the weather. 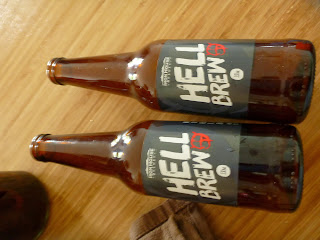 Here’s some lessons learned since then …
Lesson 1: Never, ever skip a days racing because you think it might rain.

Life has a simple rule:  you’ll generally regret what you don’t do much more than you’ll regret what you actually go out and do, or put another way if you’ve hung out for a year to do something, then do it regardless.

Skipping day two of the racing was one of the worst decisions we could have made in this event as we sat around all day doing absolutely nothing except wishing we were there racing. 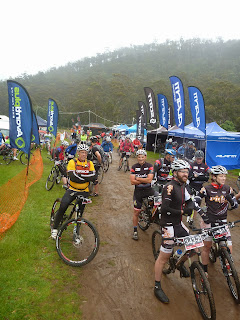 Lesson 2: Don’t try and over compensate for stuffing up …

After five hours of sitting around wishing we were racing instead, Kim had to head off to pick up Antony from hospital, and her leaving finally motivated me to do something to ensure we wouldn’t make the same mistake the next day.

Five minutes after Kim left I therefore also walked out the door and headed back down to camp the night.  I texted Kim to let her know and she agreed to follow later if she could.

This decision was unnecessary overkill.

I arrived and set up our tent at a fairly deserted campsite, and not long thereafter, so did Kim.

Not long after that the rain also joined us.

Mitigating this, we did get to have free BBQ sausages for dinner and it was good catching up with the ‘hard core’ that had decided to camp the night.

Lesson 3: Train, be fast, and ride at the head of the pack … 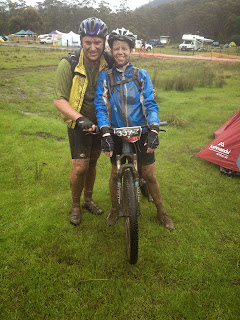 I had to photoshop (or do you instagram things nowadays?) those smiles onto our faces.

Trust me, you just had to see the guy who created this little wait to know that. 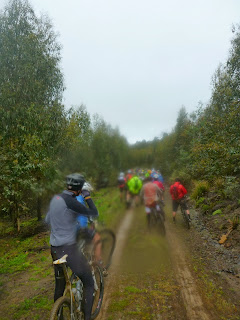 Oh, and just like motorists, cyclists are rubber-neckers as well. 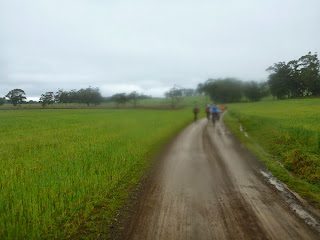 I think this therefore excuses me from participating in all future races where it will might rain as my only reason for riding is to take photos and write stupid blogs.

Lesson 6:  Singletrack is awesome … except when it’s wet and 250 other cyclists have been over it.

Then it is just another walk … 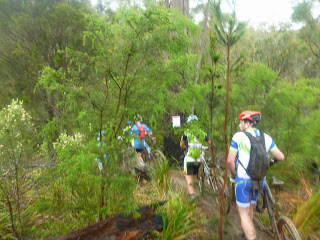 If you are fit, you will probably never know this, but just trust me on this one as I have done lots of research on this matter.

Lesson 7:  Being told the distance is shorter than it actually is, is always annoying …

In many races, you get ‘helpful’ marshalls say things like “It’s only 2kms to go” when in fact it’s five.

This may provide a short period of bliss, but then it creates a whole new hell when you get to that 2 kilometre mark and another helpful marshall says something like (you guessed it) “It’s only 2 kms to go“.

On day one of the race, about 16kms into the race, we were told my a marshall that “it was all downhill from here“.

Suffice to say that it was not.

Similarly lets just say that there may have been some underestimation in how long the cruise stages to and from the time trail stage was.  Not normally a problem, unless you’ve read lesson 8 (and you’re wet, muddy, and the ride back is all uphill)

If you don’t, then this could happen … 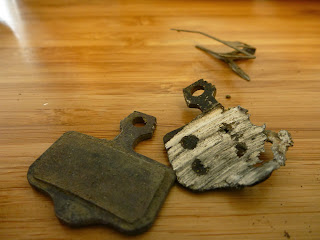 If you’re not very mechanically minded, let me assure you that this is not a good thing.

If you are mechanically minded, then yes this was actually once a brake pad and has not been instagrammed or photoshopped in any way.

Let me also say that I do maintain my bike … well at least I seem to fork out an awful lot of money getting other people to do it for me.

Lesson 9:  Lessons can contradict each other …

Despite what I said in Lesson 1, Kim had been coughing her lungs out for two nights in a row and my bike was in serious mechanical distress (my back brakes needed serious rebuilding beyond the spares that the mechanics had on site and I had a broken spoke as well)

Therefore with the prospect of the only racing for the final day being a very short ‘hot lap’ (<1 minute for the elites) around an oval at Bream Creek with hours of standing around afterwards … we decided that sometimes it is time to pull up stumps and just head home. 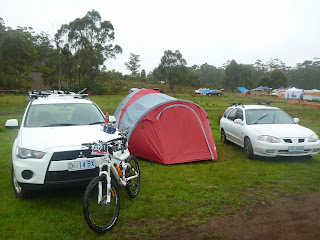 Lesson 10: Sandwiches and sausages … you can have too much of both.

I’m already looking forward to next years Hellfire Cup (please, please let there be another one) but after three days of barbecued sausages for dinner and sandwiches for lunch … please, please no more.

Lesson 11: I gotta get into some fitness for Wildside or else I am going to burn out on day one.

This will be no surprise to anyone.

What would be a surprise is if I do actually get some fitness. 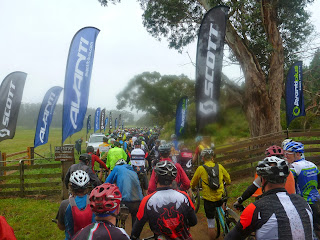 Until the next one then …