When I rode to work this morning, Mt Wellington was covered in a light blanket of snow, and I was a walking icicle by the time I got to work, but when I left this evening, the sky was blue(ish), the sun was shining and it was just too nice a day to ride straight home, so I went for a play instead.

With a vague idea of finally checking out the section of the Pipeline Track that had been opened up to cyclists below Ferntree, I headed up the Hobart Rivulet Track, and was pleased to see how well the ‘hill bypass’ section has been built,  but what thrilled me most was when I got to Degraves Street next to the Female Convict Factory and instead of seeing the bike path along the street blocked up with firewood and parked cars … 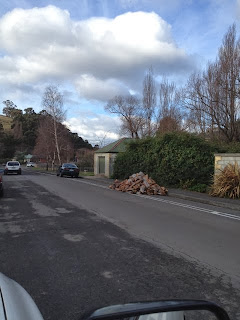 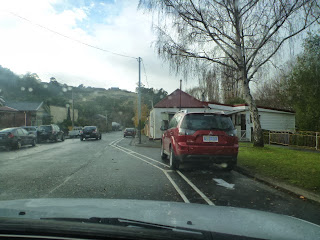 Instead I saw this … 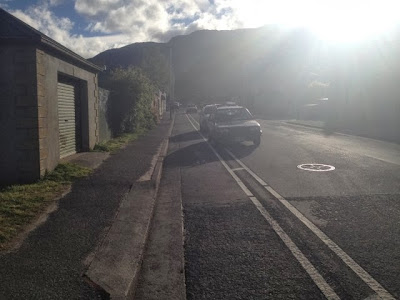 Cars parked in such a way as to keep the track open to cyclists, which just goes to prove that change will happen, it just takes time.

My next little exploration was up a small track leading off Old Farm Road behind Cascade Brewery which I’d seen advertised as a Strava Challenge on the Dirt Devils MTB website, but which I’d never ridden.

It was a nice enough track shut off from vehicles by gates at either end, and it dropped out onto Marlyn Road and then onto Strickland Avenue, however to be honest I think I would have preferred just riding up Strickland Avenue as although it shortens the route, the flipside is it’s quite a bit steeper.

Once onto Strickland Avenue, I had tremendous fun when I overtook a road cyclist out for a training ride who was none to pleased to be overtaken by some overweight, middle-aged guy on a crappy mountain bike with panniers on the back and so he proceeded to try and chase me down for the next good while.

After keeping just in front of him for a while, I started feeling guilty, so I put on a spurt of speed at Strickland Falls corner and accelerated away, and that was the last I saw of him (I was to pay for this little bit of cruelty later).

At the junction of Huon Road and Chimney Pot Road, I finally jumped onto the section of the lower pipeline track opened up to cycling on a trial basis and headed up towards Fern Tree to see how ridable this section of track was, and for the first 700 metres I was absolutely delighted.

Then I came to the Longhill Creek Aqueduct and hit this … 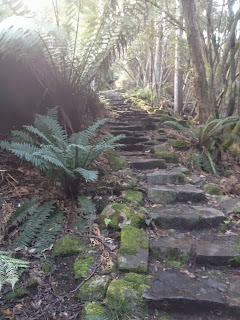 The never ending stair climb with the “no cycling on steps sign” up, so the last two hundred metres of the track ended up being a steep push (or carry) up  to the Fern Tree Tavern.  Not fun with a heavy electric bike.

There was a side track which I explored on the way up, and although there were less steps on this route it was more a walking track and didn’t look like it would stand up to cycling, plus from the top end there is a clear sign pointing cyclists down the steps … 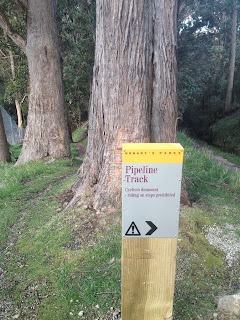 So while it was a nice scenic route, overall those steps are a real barrier to the use of this trail for mountain bikers as evidenced by the complete lack of any signs of use by other cyclists. 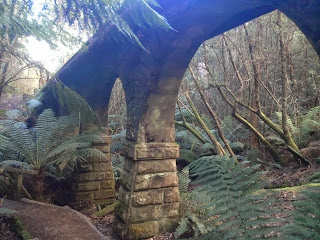 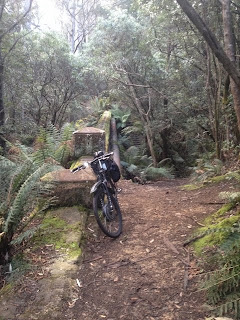 After backtracking to Chimney Pot Road I figured it was time to start heading home so I followed Chimney Pot Road for a while before cutting off on a series of fire trails to get to, and then over, Tolmans Hill and eventually home.

Unfortunately, whilst pushing up the final steep pitch to the watertower on top of Tolmans Hill I thought I spied a new track heading off into the bush … not being able to resist the temptation of new trails I followed it only to find myself in the area that has been shut off by a developer and then back down at the bottom of the hill, forcing a second journey to the top.

And it was somewhere about here that my electric bike decided that enough was enough and the battery went flat leaving me to get from Tolmans Hill to the top of Mt Nelson under my own steam.

Let me tell you if that road cyclist caught up to me here he could have ridden circles around me and still beaten me to the top because an electric bike without a battery is a very slow beast indeed.

Still, despite a full day at work I got to go out and explore three new trails and still get home before dark, which means that even though it’s still snowing … Summer must be well and truly on its way.