Skip to content
When I was in Germany, I tried to find out how easy or hard it would be to get my bike to Mont Blanc, and what I found out was that there are a lot of websites that tell you how to get your bike to Geneva, but then they all skip the detail of how to actually get it that last little bit to Mont Blanc.

So, just in case it helps anybody, here’s how I did it.

I stayed overnight in Geneva to have a look around, then I jumped on my bike and cycled the 12 kilometres over the French border to the Annemasse train station. The ride was fairly flat and easy and took me 35 minutes at a fairly casual pace on my fully loaded touring bike.

I’m pretty sure I could have caught a train there, but I wanted to ride as it gave me a chance to see a bit more of a Geneva.

It’s a pretty straight forward route to ride and there was cycle paths probably 50-70% of the time, though it was quite heavily trafficked and there were a few sections which had quite a narrow shoulder. You just head down from the Geneva train station to the waterfront, follow this and go across the first bridge and then just keep following this road until you see the signs to the Annemasse train station about 9kms after crossing the bridge.

Once at the train station, it was easy to pick up a ticket for me and the bike that day (it was about €20 and the bike was free) to Chamonix – Mont Blanc with a change in St Gervais Les Bains.

On my trip, it was a six minute change between trains, but the trains were right across the platform from each other.

The Mont Blanc train is very easy to spot, it is smaller than the normal trains and looks like this (specifically it has Mont Blanc Express written on the side of it)  … 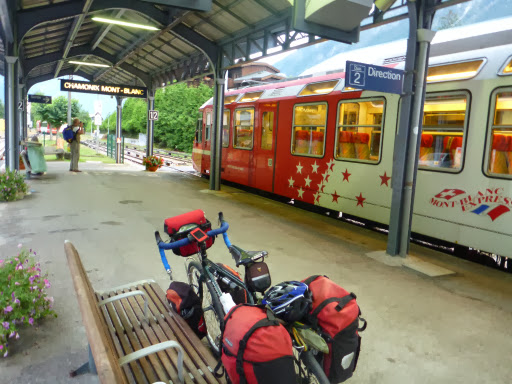 The Mont Blanc Express will take up to six bicycles.
It was that easy.

Oh, all my enquiries on buses turned up dead ends. None of the one’s I found took bikes.

Once in Chamonix, you can also take your bike through the Mont Blanc tunnel to Courmayeur, Aosta Valley, Italy on the Savda bus (more information here). 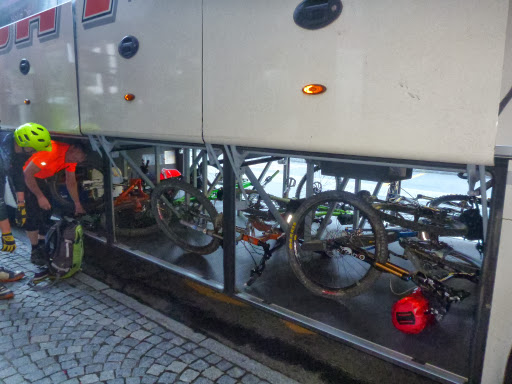 However, word from the wise, when I went over with them to Courmayeur in the morning they had a full sized tourist bus which easily took the four bikes there, and as you can see in the photo above, it took 12 mountain bikes on the way back.

However, two days later when I caught the bus back to Chamonix in the afternoon, they just had a little 16 seater minibus and they only wanted to take one of the three of us who turned up with bikes.

Luckily for me I had the golden ticket (having purchased the bike ticket earlier in the day) but in the end by taking all of the tires off the bikes we managed to cram all three in the back of the bus anyway.

The bus driver was pretty cool about it saying that they were our bikes and we could get them in, then go for it … at least that’s what the other two cyclists told me (and it’s not like they were super motivated to get them in). The driver didn’t speak English and my Italian isn’t so good either.

Also over in the Aosta Valley, I wanted to ride down from Courmayer to Aosta and then catch the train or bus back up.

The Savda staff in the Courmayer officer told me I’d have to cycle down there and take my luck with the bus – it would be up to the driver to decide, and if the bus was full, then the answer would be no.

I also asked at the tourist information office about the train which runs up to Pre-Saint Didier, but they didn’t think it took bikes, and the ladies I talked to said they’d never seen a bike on the train. The train station finishes about 6kms before Courmayer and about 150 metres lower down.

I rode down there to check it out, but there was no information (or people) at the station so I decided not to risk it and just cycled back up to Courmayer and then caught the bus as indicated above back to Chamonix.

Anyway, hope that helps someone, someday …