So I decided to have a stopover in Geneva on my way to Mont Blanc, mainly because it was one of those dots on the map that I’ve always wondered about, and don’t get me wrong … I’m glad that I did. 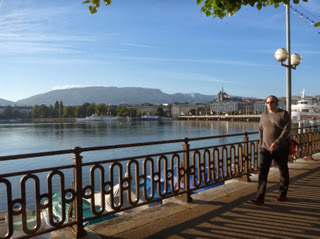 Now, I’d realised in doing this that it would mean I’d be staying in Switzerland (aren’t I smart) and hence be operating under a different currency, and I’d covered this by pre booking my accommodation and deciding to eat out on my credit card.

What I hadn’t realised (which is strange having cycled through Switzerland before) is that they also use a different power plug.

What I also didn’t realise is how restaurant expensive food is in Switzerland. I wandered down to a steak house and looked at their menu and it was around 40sf ($A50) for a steak.

So being a scrooge, I decided on an early night in bed with some peanuts I had left over from the train and my kindle for entertainment.

Being hungry, I was up early the next morning for the quick 10km ride across the border to the French railway station and as soon as I had my ticket to Chamonix I headed to the nearest bakery for a catch up breakfast.

It was good to be back in the € zone.