One of the surest signs that I’ll do poorly at an event is how I feel when I wake up in the morning. 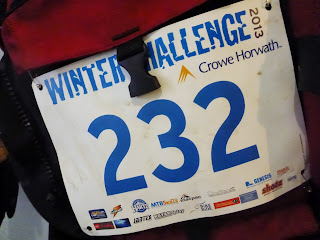 If the butterflies are out in force, smashing around inside me like a crazy hyped up swarm seeking to escape … well that means I think I’ve got a chance at something, and so it’s going to be a good day for competing.

If however I wake up, turn over in bed and calmly lay there listening to the rain beating down on my roof … then I know for certain I’m in trouble.

This morning even the butterflies rolled over and listened to the rain coming down so I knew I was in big time trouble.

But then, truth be told, I knew that I was in trouble when Kim entered us so that really wasn’t a surprise.

But, we still headed on down, I had a breakfast to match the training I’d put into the event … 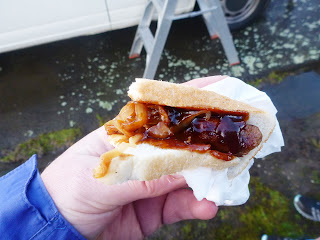 … and Kim got ready to go for her run. 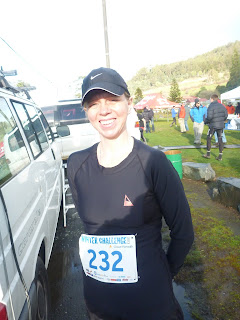 She at least looked ready to go, which was kind of good because that’s exactly what they did soon thereafter … 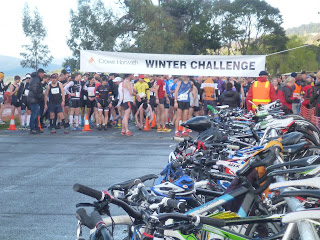 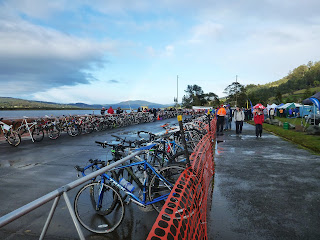 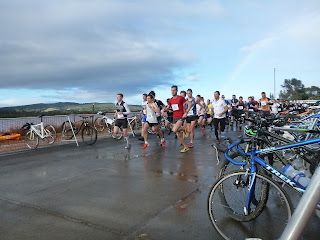 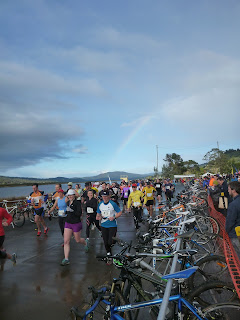 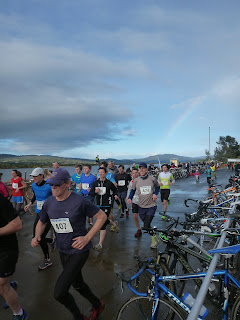 and then abut 50 minutes later they started coming back again …. 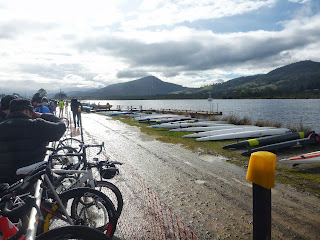 I don’t actually have a huge amount to say about the event.  Kim had a pretty darn good run coming in just under 1:10mins which was ahead of her target, and this was despite the course being 1.4kms longer than she expected which is pretty impressive and a good sign for her Sydney Marathon in September.

I then set off, jumped straight into my granniest gear, and commenced counting the number of cyclists who went passed me …

… and believe me there was plenty of counting to do.

I did have two highlights on the ride.

One was a guy who went past and asked if I was the Rambler (yay, someone reads my blog) and basically gave me a thumbs up comment, and the second was another dude who went past me and after chatting for a brief period made the comment that some of us are just here to complete, not compete … and that’s a sentiment I heartily endorse.

Especially when riding and pushing up through conditions like this … 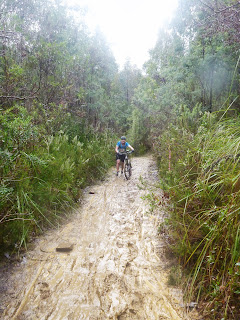 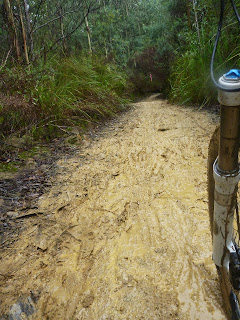 It was pretty hard going, and heading back down again wasn’t any easier.  Heck it was downright terrifying to be honest and having decided a few weeks ago that I would like to at least make it to 40, I took it pretty easy going downhill and probably lost almost as much time going down as I did going up … at least that’s what I’m telling you.

The good news is I seriously think I did manage to take out the Lanterne Rouge for this leg, and because of that I am quite excited to see the results. 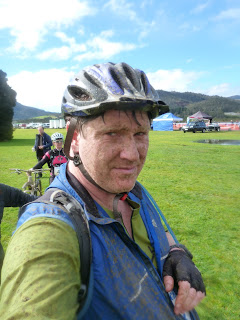 I have no idea how long I took for the paddle, but I got sent off on the leg before Kim got back (because of my slow mountain bike leg, not because of her road riding leg) and after overtaking four or five slower paddlers I settled in with another guy for most of the race, but he took off about a kilometre from the finish line and I had no chance of following him.

And then it was over (to be honest they had pretty much packed up and left before I even got back, but I’ll pretend that it was only over when I got back).

My bike, my car … heck pretty much everything is covered in mud, and that’s about the way it should be after a Winter Challenge.

As I sat shivering in my car trying to heat up after the paddle, it seemed hard to reconcile where I was with the fact that at exactly this time last year I was flying back from my months cycling in the USA in 40+ degree heat.

Overall, albeit that I only just made it, I did make it, and I guess for a guy who is on a downward spiral, I’m lucky that it’s a long way down so I can still enjoy the ride … and I’d like to say thanks to all those who took the time to say a few encouraging words as they shot past me.  I think it’s one of the best parts of an event like this.

Oh, and as to those butterflies … well they are flying around a lot at the moment, but for something else and the days are very quickly counting down …