One of the hardest parts of any trip (hold onto your seats for this one …) is the first step.

Yep, getting started is a bitch.  It’s that moment when you tell yourself can still back out with dignity, you really can, but at the same time you know at the back of your mind that you only have a finite amount of days, so if you don’t do it now, then when?

I love planning (well, most would call it dreaming, but I call it planning), I love being in the moment and doing stuff and I particularly love looking back on what I’ve done … but getting started, turning the dream into reality.  That is something I hate doing.  Whether it’s opening the car door when you arrive at a trail head for a ride in the rain or unpacking my bike after a week lugging it around Italy, my love of the first step is universally non existent.

.and yet still it happens, this … 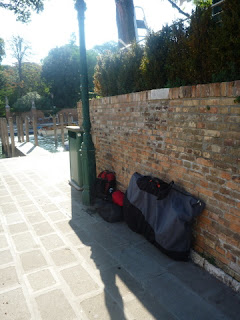 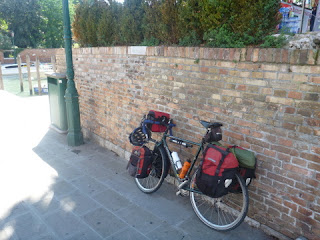 albeit with a time lapse of over an hour, and a lot of sweat, swearing and “why am I doing this?” thrown in for good measure.

Then with my trusty stead assembled and still not ready for the first step, I did what any person in my position would do having just assembled their bike in a strange country ready to launch themselves out into a major bus and car thoroughfare … I walked over to a cafe, sat down and ordered a cold drink so I could try and figure out what I had forgotten or done wrong.

But, no, after some thought, I confirmed that I’d checked the spokes, the wheel turn, the brakes, the handlebar alignment, admittedly I’d just thrown things in Panniers but at least I’d made sure the weight was about the same on either side … I figured I was good to go.

So with a few more breathes to steel myself, I jumped onto the bike and set off … and it went swimmingly … just long enough for me to enter the stream of traffic (and yes I did remember to ride on the other side of the road) and get going … then I realised that my seat was about an inch too high just as my handlebars collapsed down under me because I’d also forgotten to tighten them properly (having gotten distracted mounting the handlebar bag).

Fortunately I somehow managed to not kill myself and fifteen minutes later, after several more adjustments and starts, I finally took off into the traffic heading from Venice to Mestre.

Now, after you come out of the maelstrom of the car and bus parking at Venice, you head onto a long causeway to the mainland, and it is very important for cyclists to get off the road and onto the bicycle lane than runs between the road and the railway.

I realised this just as I cycled past the unsigned, and as I was about to find out, the only exit from the road onto this path resulting in me cycling for about two kilometres down a busy, narrow two lane road with barriers on either side.

My stress levels were getting rather high when I say a guy and a kid coming along the road in the opposite direction which made me think “this is OK, there’s other people doing this as well” at which point a gap in the concrete wall between us appeared and I saw that they too were on a cyclepath on their side.

It was just me and the traffic.

Somehow I got to the other side, at which point all of the traffic got channeled into a single lane due to roadworks (yes, this really was my hell) and I had to cycle along for what seemed like forever with all this traffic banking up behind me.  Fortunately, the cycleway had merged with the road at this point, so at least there was another cyclist with me.

Finally I made it to Mestre where I fired up my Gaia GPS App and prayed to any god that would listen for it to work … and work it did … like a charm as it guided me all the way to Treviso down some gorgeous backroads, small towns and river paths … 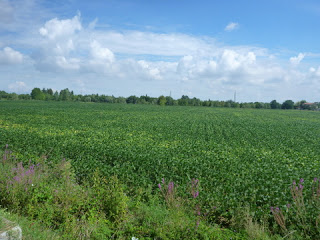 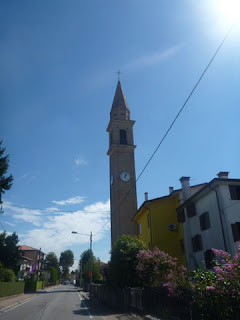 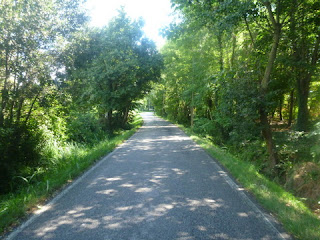 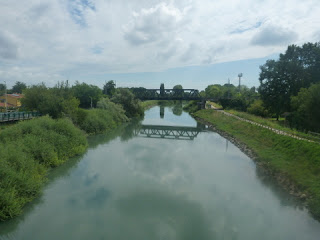 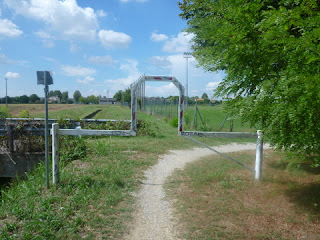 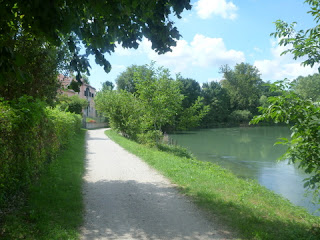 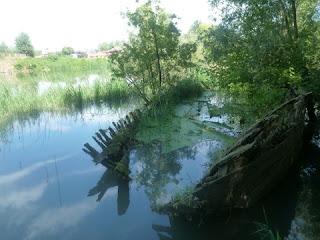 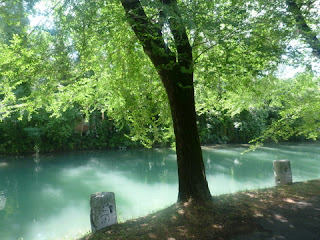 In fact the only times I got lost was when I turned it off because I thought I knew where I was going or when I saw a bicycle route sign and thought “Oh … that must be the way I should go, how many cycleways could there be in Europe?” … only to check my GPS a few kms down the road to find out that there are quite a few (thousand) cyclepaths in Europe and randomly following every cycle route sign I saw was not going to be a good travel strategy.

Eventually I did find my way onto a cyclepath that I was meant to follow (The E4 – I know a spectacularly poetic name), but I had lost all faith in cyclepaths by this stage so continued to consult Gaia App at every junction regardless … 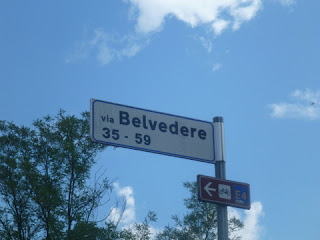 I had two (other) problems with today’s ride.

Firstly, I had trusted some travel guide route notes I had found (and followed) which said that this ride was roughly 35-45kms.  A good distance for a first day I thought.

Turns out I should have checked as the total distance ended up being well over 60kms (my Strava for the day shows just under 60kms, but I forgot to turn it on after a drink stop and lost about 20-30 minutes of riding) and the second problem was that when I got there, I couldn’t find anywhere to stay – literally.

I cycled around and around the centre of town looking for a tourist information office or a hotel, but everything was closed and it was only by luck that I went back to Gaia App (getting the idea that I like this App?) and found that it had some hotels showing on it, so I clicked on the nearest one and 10 minutes later I had myself a bed (breakfast included) for 50 Euro.

First days damage is a bit of sunburn (finally found some sunscreen now) and very sore hands as the tape from my handlebars had all come off during transit.  Will fix that tomorrow.

I also discovered what could be a rather major problem with my rear rack … I’d kind of forgotten that one of the rear bolts had the thread sheared on my last flight back from the US.  I tried jerry rigging it with a larger bolt, cable ties and sticky tape today but it developed a rather worrying rattle by the end of the day and this isn’t a job I can fix on the road.  Heck, who am I kidding – I couldn’t fix this if you gave me a fully equipped workshop.

If it gets worse tomorrow I shall seek out a bike shop and pray to the cycling gods that they can help me with a repair.