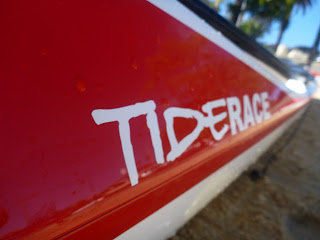 Heck, let’s be honest, if I find a new toy I even half want, I’ll gnaw away at it like a dog at a bone until I find sufficient reason to justify its purchase.  Yep, it might take me a while to get there, but I do usually get there.

For example, lets pretend I decided a few months ago that I might want one of these …

Then lets pretend that Kim and I were heading up to Sydney for the weekend, and that due to a rescheduling of our airfares (in our favour for once) we happened to find ourselves with a few extra hours up our sleeves.

Given, this is my fantasy, lets also pretend that Kim took this really well and thought that driving an hour out of our way, then sitting around for several hours while I go for a paddle was also a terrific idea and something she really wanted to do on her birthday weekend away.

… or if you’re having some trouble with that last paragraph, you can instead pretend that Kim thought it somewhat appropriate that I found myself driving through the middle of Sydney’s CBD at 5pm on Friday night with a GPS system that was more confused than I was and traffic that was causing me enough stress to have a heart attack.

Regardless, we did end up driving out to Watsons Bay, and I think if you asked Kim she might agree in hindsight that it wasn’t so bad sitting down by the shore eating a nice lunch, then lying on the grass having a snooze whilst I went out for a paddle through the heads and along the cliffs outside Sydney Harbour.

I tried to warn Rob that I was a pretty average paddler, but I don’t think he really believed me until we got out on the water and he started paddling circles around me because I was going so slowly.  He was very nice about it though … although that may be because he wanted me to buy the boat.

But you ask, what about the boat … does it live up to the hype? 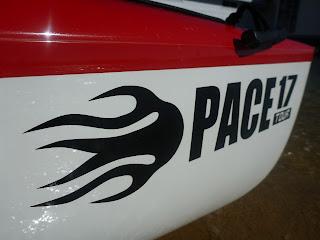 First things first: this boat handles beautifully, and I never really felt uncomfortable in conditions which were at the outer edge of what I’ve paddled in for quite a while, and which I would have felt decidedly uncomfortable in in my current kayak.

The boat almost wanted to right itself each time I got a little tripped up by the seas and swell.  I can see why they say this is a great boat for an intermediate paddler because its secondary stability was phenomenal.

Then when we got back close to shore and Rob suggested I try a roll, which I reluctantly did after my excuses about not having rolled for six months didn’t work, the boat almost turned itself back upright and I felt like a (very, very) happy passenger who was just along for the ride.  Tick.

In terms of fit, I was warned that the boat is optimal for someone in the 75-110kg weight range, which puts me about 10kgs outside of the happy fit range, but I still found the seat comfortable to sit in (albeit it pinched a bit on the left side which I felt just needed a backrest adjustment) and the deck was higher than my current boat which combined with the knee braces made it narrower to get into than my current boat, but again that was just different, not good or bad (OK, it was bad when I came back into shore and half way out of the boat it started floating back out to sea with me trapped in it and Kim falling over herself with laughter).

I also didn’t have the foot pedals quite right … The right want seemed too far out and this caused a bit of numbness as I tried to counteract the weather cocking, but again I’m thinking that’s just set up.

I loved the four hatches (my ten year old boat still only has two) though I noticed that there was water in two of them from the previous user who had just done some rolling practice.  The two main compartments had huge easy to load hatches and I’ve wanted a deck hatch for so long.

There was also plenty of room to install a pump behind the seat, though I’m now thinking of a foot pump rather than electric pump so this could be a really useful thing I don’t need (though I’m sure I’ll find something to shove behind the seat).

It came with what I thought was a surprisingly small rudder (though Rob assures me that this could be because we Tasmanian’s have an obsession with over-sized rudders) but that said I didn’t really notice any lack of control because of this, and I loved the way it felt with the rudder up … quick enough and easy to turn which means I can still go and play when I want to.

Strangely though, after having sung all these praises, I didn’t actually like the overall look of the boat (especially not when it sat alongside the tiderace Xcite which was a truly gorgeous looking boat).  To be honest the analogy that sprang to mind was that it reminded me of a moose … something that just has all the right elements, but still just doesn’t look right.

Overall, I had to admit that this was a boat that can do far more than I can right now, and although it doesn’t apparently have the top end speed or surfing characteristics of a Taran, I think the extra stability is more than a reasonable trade off for that because I want to be able to stop on the water and feel relaxed as I take some photos or just soak in the day around me.  What’s more (being truthful) I don’t have the skills or fitness to reach the Pace’s top end speed at the moment, never mind the Taran’s so I’m probably not missing out on much in the short term.

But then comes the sting in the tail … It will cost just shy of $5,000 to buy one of these little toys and get it down to Tassie, and I’d also need to wait until June/July for the next shipmentto come in.  On the upside, I would get to choose between a red one and a black one, but with only five coming in the next shipment I’ll need to make that decision very soon ….
To buy, or not to buy, that is the question …

Oh, and if I do buy one … I’m thinking of naming it “Commodore’s Folly“