I’d checked on weatherzone.com.au, I’d checked the ‘official’ (and completely useless) falls creek website, I’d tried to check the webcams (none were on) and we’d even stopped at the Mt Beauty Information centre and checked there … and the advice was unanimous … yes, snow had been falling up at Falls Creek, but it wasn’t settled on the ground so we could go riding. 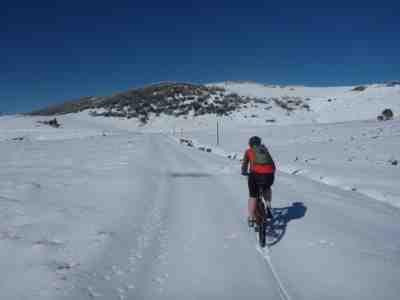 Bollocks, is what I have to say to that.

Our plans today had been to tackle the 30km Brumby Run described on thedirtydozen.com.au website, but it became pretty obvious, pretty quickly, that that wasn’t going to happen … 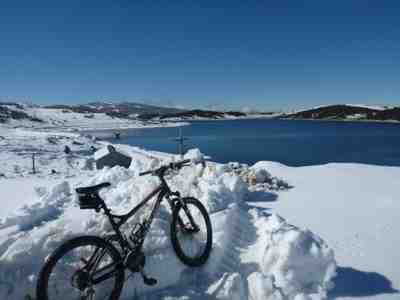 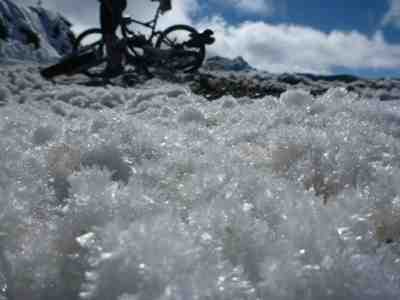 So we went for a plan B instead which can be best described as let’s see where we can get to.

The only cleared track was around the lake (Rocky Valley Storage) which is above the village, and despite the map showing it didn’t go all the way around, on the ground it looked like it sort of did, so we sort of thought let’s give it a try, or maybe I just said to Bec “follow me” assuming that she’d read into that “let’s see if we can get around this lake”.
Regardless, she followed so was equally to blame for what followed.
The first few kilometres out to the bottom of the Big Dipper tow was pretty well cleared, but after that we were on our own … 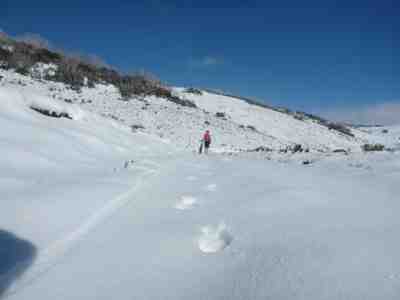 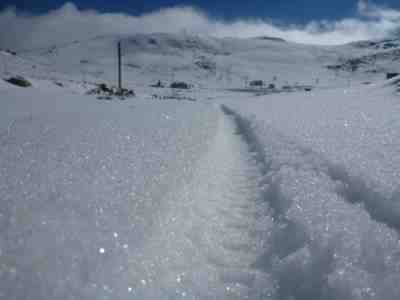 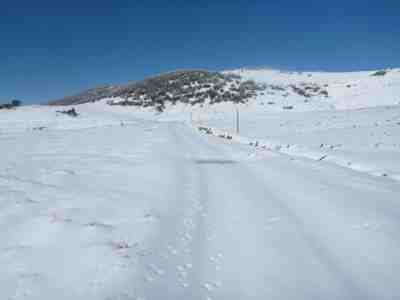 We started playing around with our tyre pressure (I got down to 10psi at one point) and riding style (smooth and steady with no power strokes) to keep moving through the snow and it made a huge difference … until the sun continued to heat up and the icy crust collapsed.  After that the only thing that made any difference was pushing the bikes.

We got around to some pumping station or something and that’s where the track ended, but unperturbed my GPS and the map showed a ‘path’ continued on around the lake a bit higher up and so we headed for that …
Fifteen minutes later, after hauling our bikes through a creek and soft snow we discovered that the path we were looking for was just a XC ski trail, not the walking trail I had hoped for, and after much inner soul searching we made the only decision we could … Fun has to take second place to the high altitude, slow recovery damage, that any further off track travels may have caused so we turned around and headed back to the car the way we came.
Just for the record we only walked on thick snow cover and caused no vegetation damage at all. 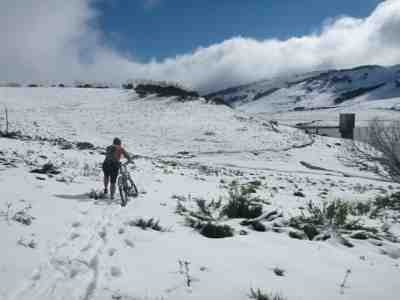 In contrast to this, I managed to destroy my favourite pump (it didn’t like the cold and just disintegrated) and I think we may also have destroyed my tyre sidewalls playing with the low pressure riding … 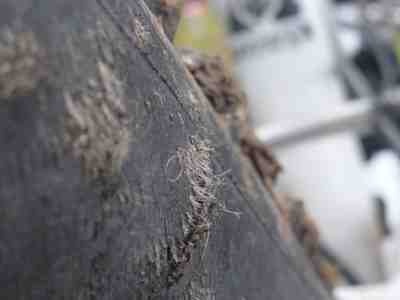 But who cares, we got to play in the snow and build snowmen. 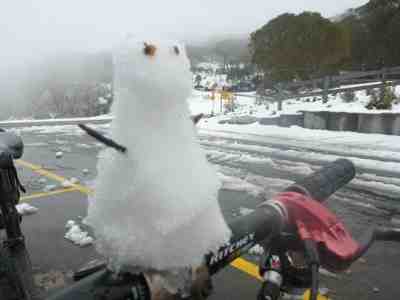