So I was sitting by the tent in Whangamata last night with all my maps laid out on the ground beside me doing my route planning when a two year old wanders over and asks what I’m doing.

Trying to explain the concept of a map to a two year old isn’t that easy. After my careful explanation (aimed at a two year old) he still looked at me strangely and assured me that of course he could ride his bike from there to there … and just to prove it to me, he promptly stood up, stepped onto the map and proceeded to show me how easy it was …

So, things to add to my knowledge base: two year olds are not spatially or conceptually aware, nor do they understand that walking on maps is not a good thing.

Fortunately at this point the kids father finally realised his son had disappeared and came and retrieved him at about the same point that Kim walked back from her shower.

“You know, that waterpark that started this whole trip … The one you saw on Cath’s blog and decided we should bring the kids over to” …. I replied, whilst trying to ignore the obvious fact that the only two kids that had actually come over were Kim and I and that we’d left the real kids in Tasmania.

“Why would I know, you’re the one who wanted to go there!”

“Yea, genius, but you’re the one doing the navigating.”

New Zealanders have a road sign for this situation … 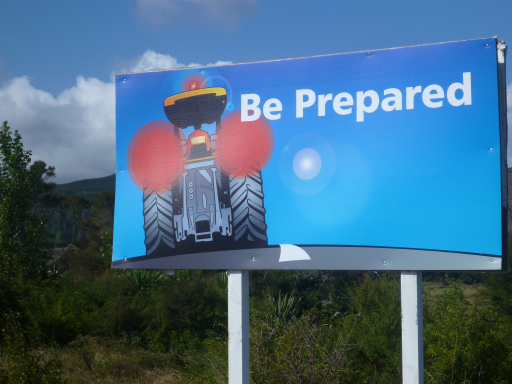 “Oh” I mumbled, but only because I couldn’t think of a better come back that would make her responsible for this little oversight.

“Well can you remember roughly where it is?” I asked.

“I mean it’s near Rotorua somewhere right … I just don’t want to ride past it and have to backtrack 10kms. It started with a ‘W’ didn’t it … Do any of these sound familiar …”

At this point I start reeling off every word on the map near Rotorua that started with a ‘W’. After listening to the options, we both agreed that Waiteti sounded about right, and what’s more it was right on one of our possible routes, which made it perfect.

With that sorted we headed off for dinner.

‘Blue’ (my nickname for the two year old map reading kid who kept pointing to everything’s he owned and saying “it’s blue”) looked at me strangely as I walked past his site … He obviously still thought me a bit stupid.

We found a nice little Thai restaurant in town, but no wifi, so during dinner I decided that maybe it was time to bite the big expenditure bullet and I sent Cath an Emergency Broadcast text message (whilst hoping that the costs of text messages wasn’t about to force me to sell my house to pay my next phone bill). 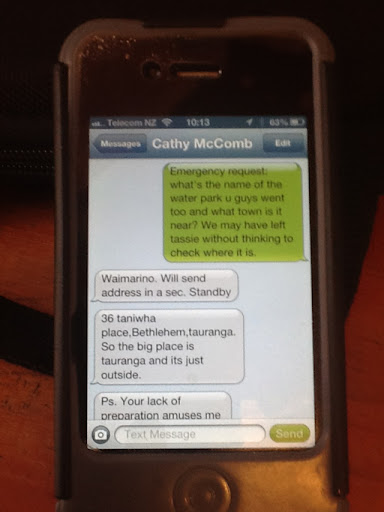 Near Tauranga hey, what’s that … 50kms from Rotorua … Hmmm … Who could have known?

… and that’s the story behind why tomorrow we will now turn left towards Tauranga when we get to Waihi (30kms down the road) rather than continuing along the rail trail to Te Aroha and following the back roads to Rotorua. That’s how you plan a holiday.

PS. Thanks Cath, I owe you one for that.