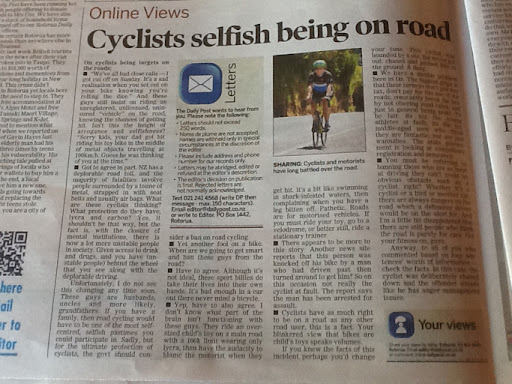 Not sure if you can read the text, but the title gives you the gist … virtually the whole half page is filled up with hate filled rants about cyclists using the roads without being registered, licensed etc.

It’s the usual gutter trash you’d expect from a lazy media trying to promote a reaction, though I’m sure they’d argue that at the very end of the article they did actually include a couple of responses with the real facts behind what happened (a motorist got out of a car and bashed a cyclist).

It’s frustrating to see this sort of trash get published, but it also makes you glad that we’re at the end of our little cycling trip.

Did I mention that yesterday cycling out of Tauranga there was a sign up on the side of the road showing the number of drink driving offences since November 2012.

In 3 or 4 months there had been over 370 people caught drink driving. Gulp. I’m hoping that’s not just in the local area.

No wonder we’re not seeing many other cycle tourists. They’re probably all dead in the gutters somewhere.

… I wonder if any of those drink drivers have wound down their window when caught, looked up at the police officer and said “Hi, my name is Judy” …