So rewind back in time a month or so, and I’m sitting at work – I mean at home – and this email comes in from a lady who has just been kayaking over in New Zealand and wants to know about joining the sea kayaking club as she enjoyed it so much.

Intrigued, in my response (prepared I stress at home) I asked her where she went kayaking and found it was a place called Cathedral Cove. I googled this and found it was pretty well smack on the route we had planned for our little sojourn over here. 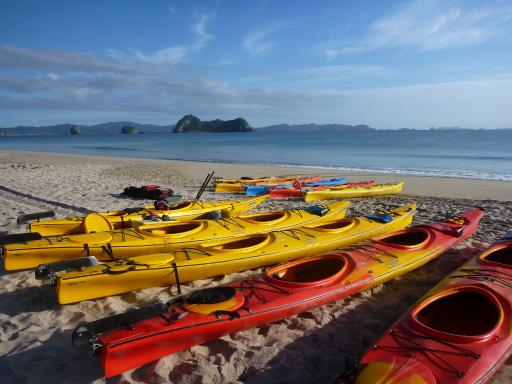 Straight up I can tell you it wasn’t the kayaks themselves (and yes I know I am being a snob, but in my defence I felt like I needed a paddle shaft extension just to be able to reach over the side of my boat to get the blade into the water). 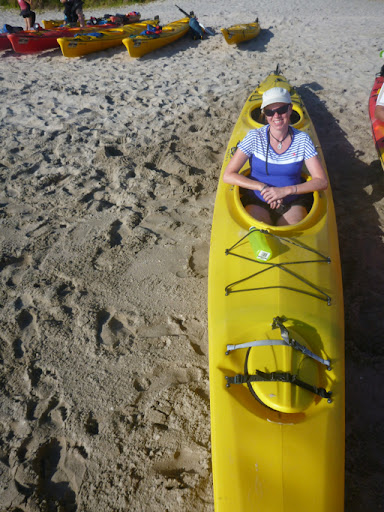 What it was that was so magical was the place.

We may have only covered 7kms or so in our little trip, but it was a wonderful taste of some beautiful coastline and intriguing islands … A place where I’d love to have my own kayak, snorkelling and camping gear and just go and explore. 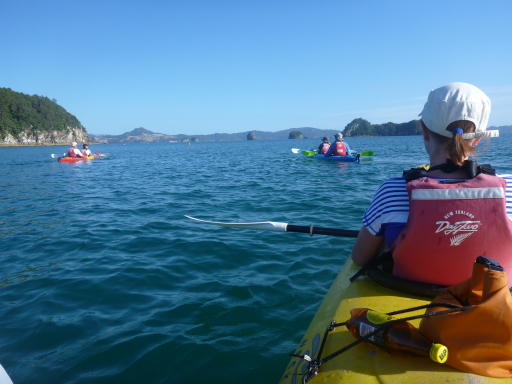 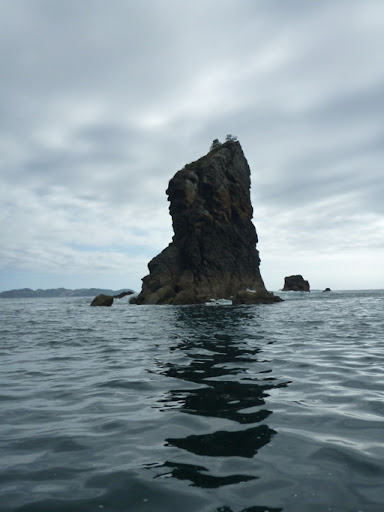 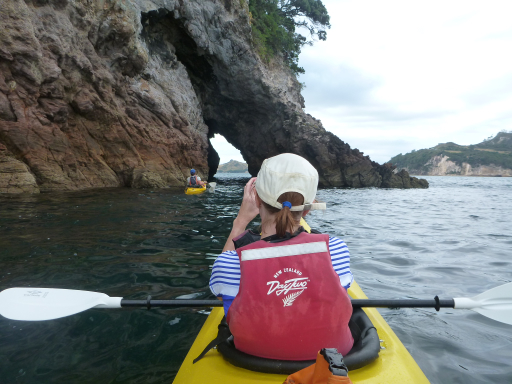 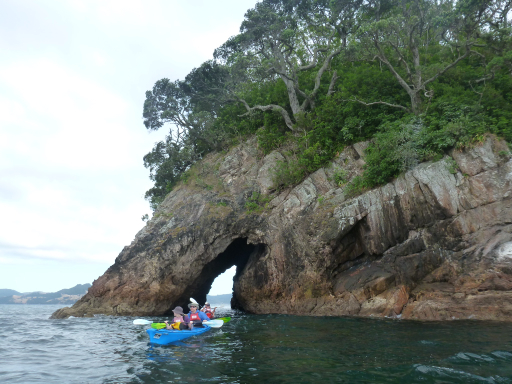 We of course ended up at Cathedral Cove (which was just around the headland from Hahei) where we got to wander around with everyone else who had walked or boated there, but with the added bonus of having a fresh latte prepared for us as we did so (kaching – that’s what we paid the $NZ95 for). 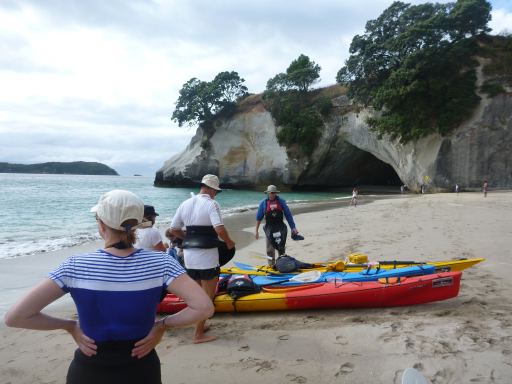 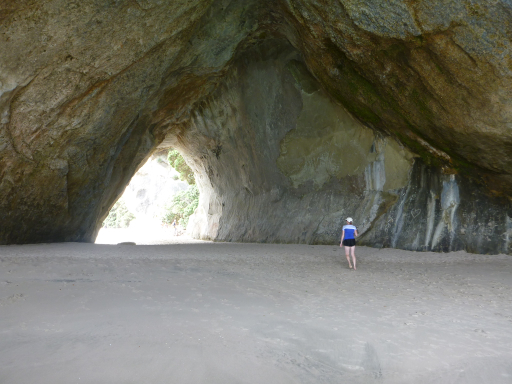 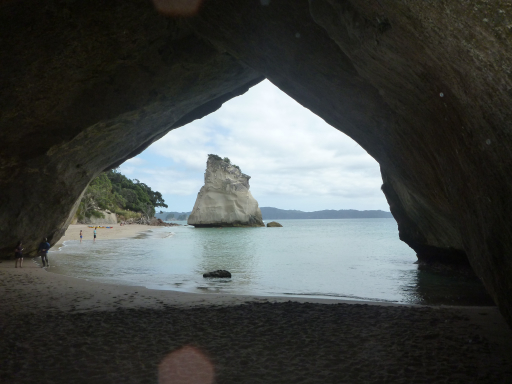 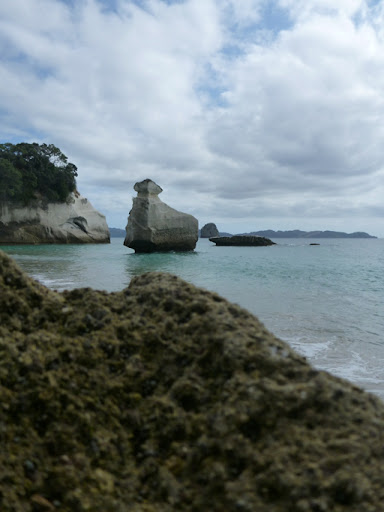 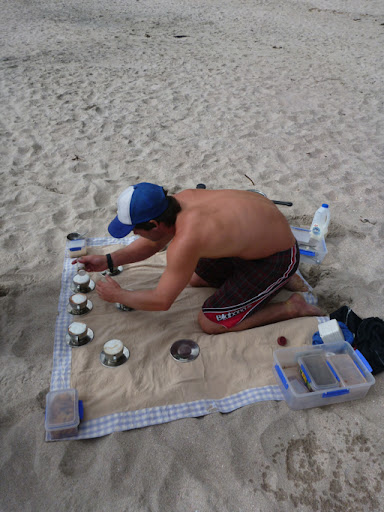 I went for a swim under some of the rock overhangs and managed to disturb a secret mega colony of insects which attacked me with due gusto, leading to a retreat back to the kayaks and a paddle home … with a few more explorations along the way … 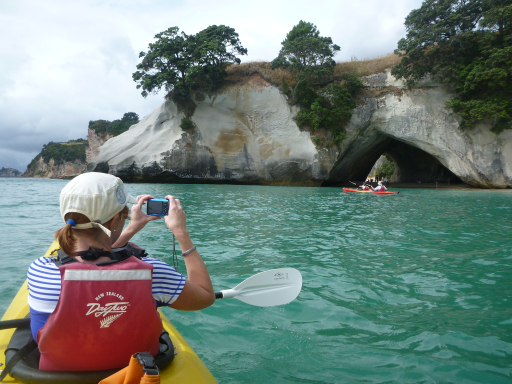 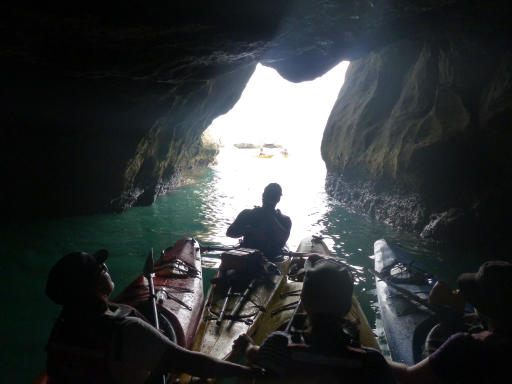 Just as we were coming back around to Hahei, after my instructing Kim to stop paddling half way around the trip because her paddling was more like picking up a bucket of water and scooping it over me and my wanting to keep my only T shirt at least a little dry, it started to rain.

I mean it rain rained.

Kim accused me of being a princess ‘wanting to keep dry’ as we walked back down the beach towards the campsite in what had become a near torrential downpour, but with that said she was inside the reception office and had booked us in for a second night before I had finished my stroll in the rain.

And that’s why we’re still here in Hahei for a second night. It poured all afternoon, though it has cleared now and we are sitting outside our cabin listening to eighties music blaring from one of the many bus tour groups that desended upon us today, and as I’m feeling a bit better we’re hopeful of making it a bit further down the coast tomorrow (I’ve rigged up what I hope is a concoction to stop my seat sliding down with zip ties). 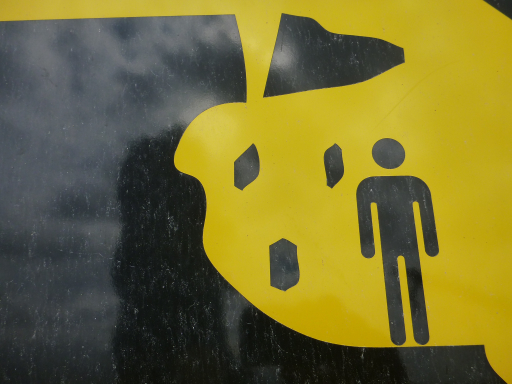 … I think it means please drop a rock on my head and kill me.