I have a bit of a confession to make … as much as I’ve loved this cycling trip, I’ve also been feeling like there’s so much of New Zealand that I’ve missed because we’ve been travelling so slow, and of course on a bike you have to make the effort to get everywhere…and that wasn’t high on the agenda.

So today, we hired a car and went all tourist on the Rotorua region.

The plan was to hit the thermal features in and around Rotorua (OK, my plan had been to drive over to Hobbiton, but as mentioned in a previous post, girlfriend wanting mud massage apparently trumps boyfriend wanting to go and visit Lord of the Rings movie set … I still don’t get how that works, but I’m assured by Kim that it does).

So we got picked up in our mighty machine by Nicola from Pegasus Car Rentals only to find that our vehicle of choice today was of make and model unknown and a tad older than I expected (with 180,000kms on the clock).

We were also to discover that it didn’t quite have enough power to both drive the engine and the air conditioner above 84kms an hour … above that speed, the air con just shut down and the car became a speeding furnace.  Fortunately, I think it’s top speed was only 94kms an hour (and that was when going downhill) so this wasn’t really a problem once we’d figured this little glitch out.

So, with our mighty beast in hand we headed straight over to Wai-O-Tapu Thermal Wonderland (note that: this wasn’t a park – it was a wonderland) to see the marvel of the Lady Knox Geyser which to my geological delight, erupted at exactly 10.15am everyday.

Now, just as background here, back in my younger days I spent a month or so in Montana working with the Montana Conservation Corps building tracks and stuff, and near the end of the month I managed to contract giardia (apparently drinking from mountain streams wasn’t the great idea it seemed at the time).  The upside of this little accident was that the doctor prescribed that I spend a week just relaxing and when I mentioned this to one of the trip leaders, he was like “Darn … well we’re heading down to Yellowstone National Park for a week, you’re welcome to just come and camp with us, we’ll cook your meals and you can just chill out and relax in the hot springs“.

Thus was spent one of the best weeks of my life, soaking in hot springs and ice flow rivers and generally just exploring the geothermal wonders of the park.  Seriously, if its not on your bucket list – add it.  If I didn’t live in Tasmania, Montana would be one of the next places on my list to live.

So with that background, and having spent a day watching Old Faithful (which I now see you can watch online), you can imagine how less than impressed I was with the following events:

1. After forking over our $60 for our tickets, we were told by the ticket seller “Oh, I should tell you she’s (the geyser) not performing at her best right now” … No, I thought to myself, that’s something you should have told me before you sold me the tickets.

2. Finding out that two cups of coffee and two sausage rolls cost $18 … I thought this was Wonderland,  not  Movieworld?

3. (and most importantly) arriving at the geyser (30 minutes early to get a good seat) to find out that in fact this is not a natural geyser like Old Faithful, and that in fact it is not really a geyser at all … The darn thing was built by prison work crews in the area decades ago to wash their clothes in, and the reason it goes off so faithfully every 24 hours is because they pour some sort of catalyst into it to make it do so. 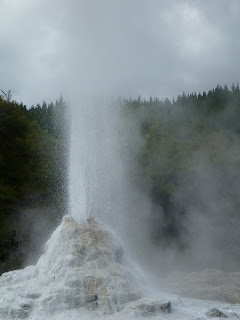 However, we had handed over our money, so we duly took lots of photos and then drove back to the main thermal site and wandered around there for an hour or so taking lots more photos wherever there was a sign telling us that we were looking at something.  Yep, today I was a good tourist. 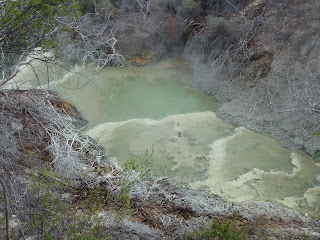 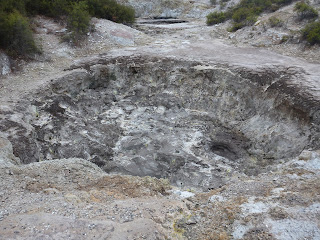 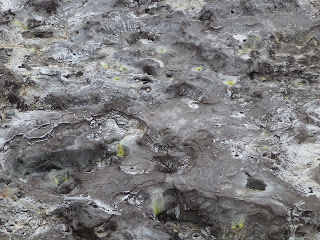 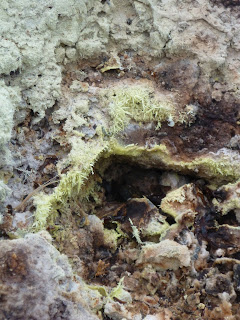 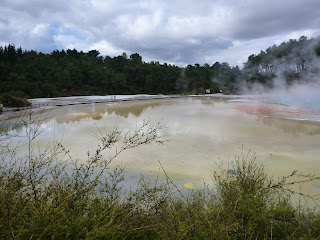 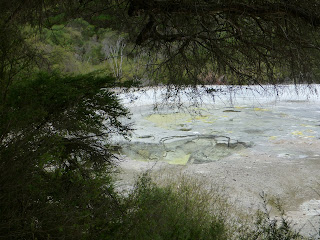 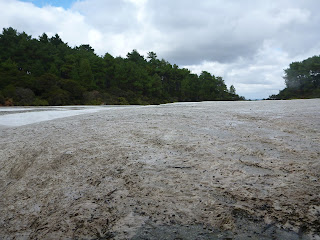 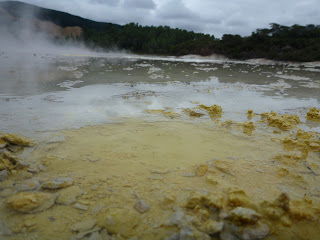 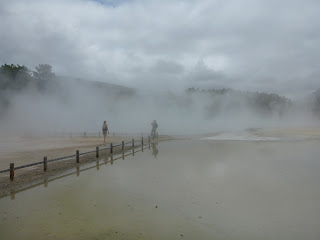 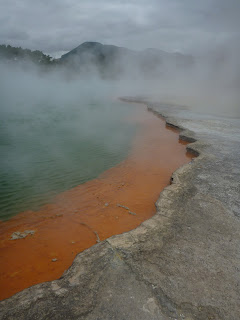 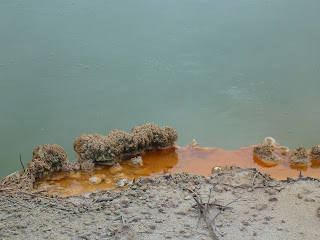 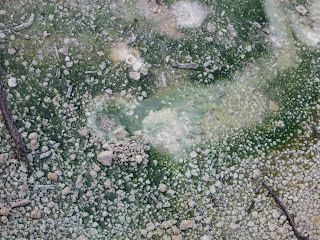 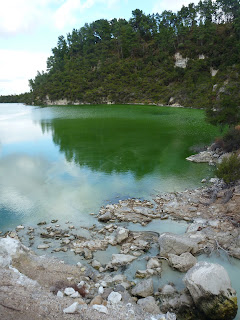 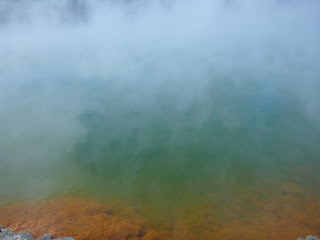 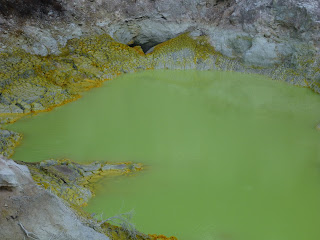 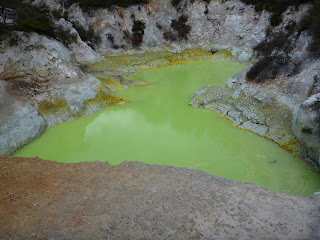 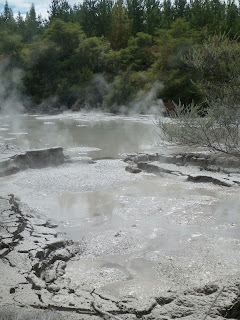 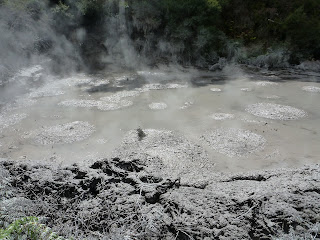 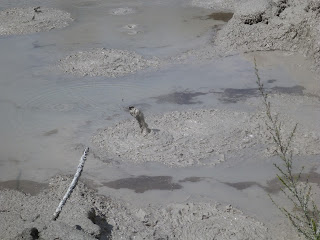 After this little experience, we still had a few hours to kill before Kim’s massage extraordinaire experience … so we drove back to Rotorua and … wait for it … we spent 2 hours driving around all of the souvenir and electronic shops looking for presents for the Monsters.

We even had lunch at Burger King.

I am the Tourist King.

After checking into our hotel (and almost crying about the three wasted nights we’d just spent in that hell hole of a youth hostel when we could have been staying at the Mercure for the same price), Kim finally got delivered to her Mud Bath Experience from which she emerged two hours later a happy, relaxed Kim … though I’m still trying to reconcile that with her threats to murder the two stupid women in the showers next to her massage room who talked and shouted the whole way through her massage somewhat ruining the experience.

So after all that, I have to admit it was kind of nice that night as we sat in some restaurant called the Kurious Kiwi eating over-priced, over-cooked steaks on a bed of mildly warm chips to look back on the day and realise that maybe I hadn’t missed out on nearly as much as I thought by not taking the tourist route on this trip.

Yep, I felt very good about that indeed.