I’ve been involved in a committee that is reviewing the Tasmanian Sea Canoe Club’s safety procedures for the last year or so, and as such have spent a lot of time thinking about risk, personal and group responsibility, and basically all facets of risk and safety management. 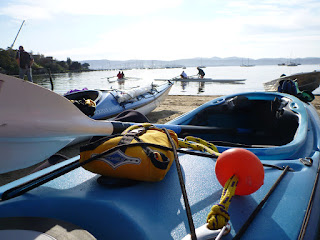 … and I have to admit that through the whole process I’ve been an advocate of encouraging freedom of adventure and the embracing of personal responsibility for our own actions (within a supportive club environment) over a procedures based tome of club safety guidelines.

It was with this background that I was paddling out around Crayfish point on the clubs Wednesday night paddle, when I touched my left rudder pedal to adjust for a wave that I was moving through, something I would already have done hundreds of time on that trip without even thinking about it,  and suddenly I felt the whole pedal disappear from under my left foot.

Hmmm, I was pretty sure that wasn’t supposed to happen.

I tried to find out what had happened by ‘feel’.  Had the foot pad just slipped off?  maybe it had come loose and jumped down the rail where I couldn’t reach it with my foot?  I just didn’t know, all I knew was I had lost control of my rudder.

What I did know was that the loss in boat control was immediate and to be honest rather startling.  With a side on slop hitting me, I found myself having to sweep stroke continuously on the right to get around the headland so I could land on a small beach I knew was on the other side and see what was happening.

It wasn’t the foot pad and it wasn’t the rail … my rudder cable had just straight out snapped.

I looked out to the rest of the group paddling off into the distance largely unaware of what had happened to me and I quickly decided that my best option was to turn back home and let them figure out what had happened.  I knew it would be a slow trip home and figured they’d catch me on the way back.

I wasn’t overly worried about this as at least one person in that group had seen me paddle into the beach and so I knew the group would figure out that I had turned around for a reason (if they noticed), and then as I set off back to where we launched, I came across two other Wednesday night paddlers so I was able to let them know I’d snapped a rudder cable, was OK, but heading back early.

I was comfortable with that.

I was not however comfortable with what was happening with my boat.  It was – at most – a half metre sea hitting me, admittedly almost directly side on, but still it should have been nothing to worry about.  Except I had virtually no control over my forward direction having to paddle all the way back with my left hand right on the paddle shaft and virtually sweep stroking the whole time out to the right … and this was just to go in a straight line.

Was I worried?  not in the slightest.

Was I having fun?  not in the slightest.

This was a slog and there was nothing fun about it, but it summarises to me the importance of self-responsibility.  I wasn’t worried because despite my boat handling like a crazed whale seeking to beach itself on the shore, I had practiced paddling without a rudder many times, I knew I had the skills to handle this situation even if it got worse: I knew I had a good strong sweep stroke, I knew how to adjust my forward paddling stroke and boat position to optimise my effort and whilst it might not be fun, I knew I’d get back. I also knew that I had lots of pull out options along the way.

If this had happened in two weeks time on my planned trip around Rocky Cape – well yes that would have been a much more tricky situation, but even typing this I think I’d still have coped.

As it turned out, as I came around Long Point I saw Steph there packing up his outrigger after a training paddle (we’d met out on the water so I’d hoped he would be there and was looking out for him), so I finally let my boat have it’s nose, headed into the beach and hitched a lift with him back to my car to save myself a 20-30 minute slog back across the water.

But what were the lessons learned?

Was it dangerous (reckless? negligent?) that despite being on a Wednesday night paddle – I was basically on my own?  I don’t personally think so.  I knew the rules for Wednesday night paddles, I knew all but one paddler who was out there that night, and they knew me.  I knew at least three people o the water knew of my situation, and despite not communicating with the main group directly I felt confident that they would find out what had happened to me.  I will mention that I did have a storm whistle with me and could have blown it and got their attention if I felt I had needed it – which I hadn’t when the situation had first gone south, and even whilst on the beach – but I’d felt confident that I’d handle the situation and had made the choice to go into that beach alone and go back alone.

The only thing that nags at me is that maybe I should have made more effort to let them know explicitly what had happened to me. I’m not sure.

Was I negligent with my equipment?  maybe, and I’ll take responsibility for that.  But the cable had frayed right at the end of the housing and so I may not have even noticed it if I had checked, and even if I had a spare cable with me on that trip, I still would have made the choice to paddle home without fixing it. 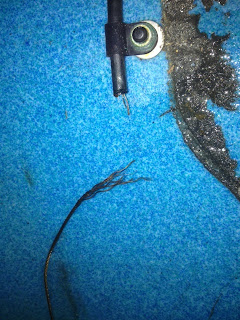 So I put it down to one of those extraordinary things that do happen and I’m happy that the situation did just happen and that I dealt with it when I did.

I didn’t need a procedures manual to tell me what to do, but I’m curious to know what others think – especially if they were on the trip …

What would of (should of) I done differently?