It’s almost Christmas … a perfect time for Next Level Kayaking’s “Come and Try It” Day.

A chance to try out all those wonderful new water toys that I really don’t need and definitely can’t afford, but which I really, really, really have to have … 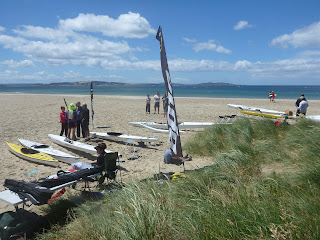 So, with only two hours to spend and llooottttssss of boats I just had to paddle, what do I do?  I spend the first 20 minutes standing in Beachfront 32 Cafe waiting for the worlds slowest cafe staff to make Steph and I a couple of (scalding hot and horrible) coffees.  Grumble, grumble, grumble.

However, with that hiccup out of the way I headed down the beach and decided which boat to sample first …. Hmmmm  …  decisions, decisions.

The Epic V10 Sport was the obvious first choice, as it is the next model up from my current V8 in the same range, so after signing in for the day, and then signing in again with the Epic people … I walked over to the Epic V10 Sport only to watch two other people grab it and haul it off the beach.

It had just been sold.  Doh.

Fortunately there was a second one out on the water, but there was a long line waiting for it, so I wandered over to the Stellar display and had a look at their boats instead.

That’s when I saw this … 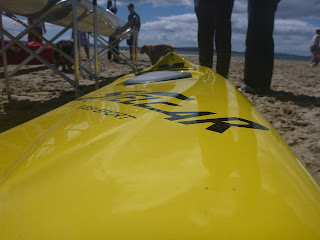 or if it’s more helpful, this … 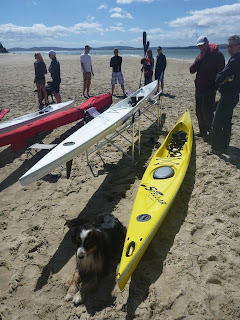 I’m sure there is one of them in my Christmas Stocking already.

For me, this boat is so exciting because it has all the benefits of a stable ski (on the water I found it had a huge amount of stability, even more than my Epic V8) but it’s designed for touring so comes with very spacious front and rear storage hatches so I can pack the wine and firewood needed for an overnight trip.  Yay.

There were some obvious drawbacks … I suspect it was designed by a ski paddler as any sea kayaker would know straight away that the hatch entrances are too small for easy packing and would require lots of little waterproof bags and lots of wiggling and pushing to get it all in (and balanced).

The front hatch was also damp and mouldy when I looked inside it, so lots of good dry bags would be needed, but for a 2 or 3 night trip, I could see this thing being a great addition to my stable … if it handles well loaded and in the surf and that I didn’t get to test.

I also tried the Stella SR, and was favourably impressed by it’s speed and secondary stability, but not so much by it’s high seat profile under the knees which felt strange to me.

Then I saw something that almost made me cry with joy …  the new Epic V8.

The new model is in most ways identical to mine, but with one mind boggling, almost worth trading in my boat and paying the extra grand or so it would take me to upgrade, difference – it has handles in the middle of the boat to allow one person to carry it by themselves. Oh … bliss.

So simple a change, yet I am going to enter it in the best upgrades of 2012 competition.

However, there was no time for all this salivating as I saw my V10 Sport coming in, so I rushed down to the water and asserted my right to next paddle.

I was so confident that the V10 Sport was the boat I wanted next that I had already drafted up my letter to Santa asking for it before heading down here today … but then I sat in it and started paddling.  I couldn’t believe this boat … it was like sitting on a giant round ball and for me it felt like it had no secondary stability at all.  I only had to spend 5 minutes in this boat to realise it wasn’t for me. 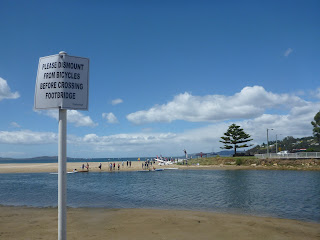 After this disappointment, I was keen to jump in and try a Fenn, but on the way up to the Fenn area, I heard a conversation which made me go all “Man from Snowy River …”

There was movement at the station, for the word had passed around
That the colt from old Regret had got away,
And had joined the wild bush horses — he was worth a thousand pound,
So all the cracks had gathered to the fray.

Except in my case, the word that passed around was that there was a Flow Superstar here today … 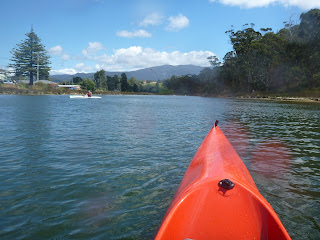 Seriously, I was so excited to try this boat out as it sounded like it had so many features I wanted … stability, speed, bombproof and the ability to have both underslung and rear slung rudders.  Superstar!

Thing is … it didn’t disappoint.

It felt really stable (about on par with the Stella SR, maybe a little better), it felt fast and you were jammed nice and tight in that cockpit so you weren’t going anywhere.  Strangely, although it felt really good to be wedged in there, it was also my only gripe … I had read that the seat can be a little narrow and deep for big paddlers, and that’s how it felt for me.  I never really felt I was sitting on the seat proper and that could get uncomfortable after an hour or so.

Would I get used to it?  I’m not sure, but it was an interesting taste and I would have liked to have a little bit more. 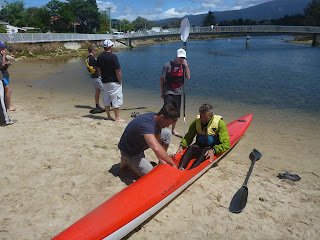 But, my time was up.  I had another appointment to get too, and really paddling a boat for 5 minutes on flat water only gives you a glimpse into the life of a boat … a bit like a quick first date, you know if there’s enough interest there that you may have a compatibility, or conversely if it’s not worth a second date, but it doesn’t tell you if you’ve found a new life long partner.

So, on that basis, I’ve decided that I won’t ask Santa to get me a V10 Sport.