The observant reader may notice that after waxing lyrical about the joys and freedom of the West Coast in a previous blog entry, I ended up staying in Sheffield which is … well it’s not on the West Coast. 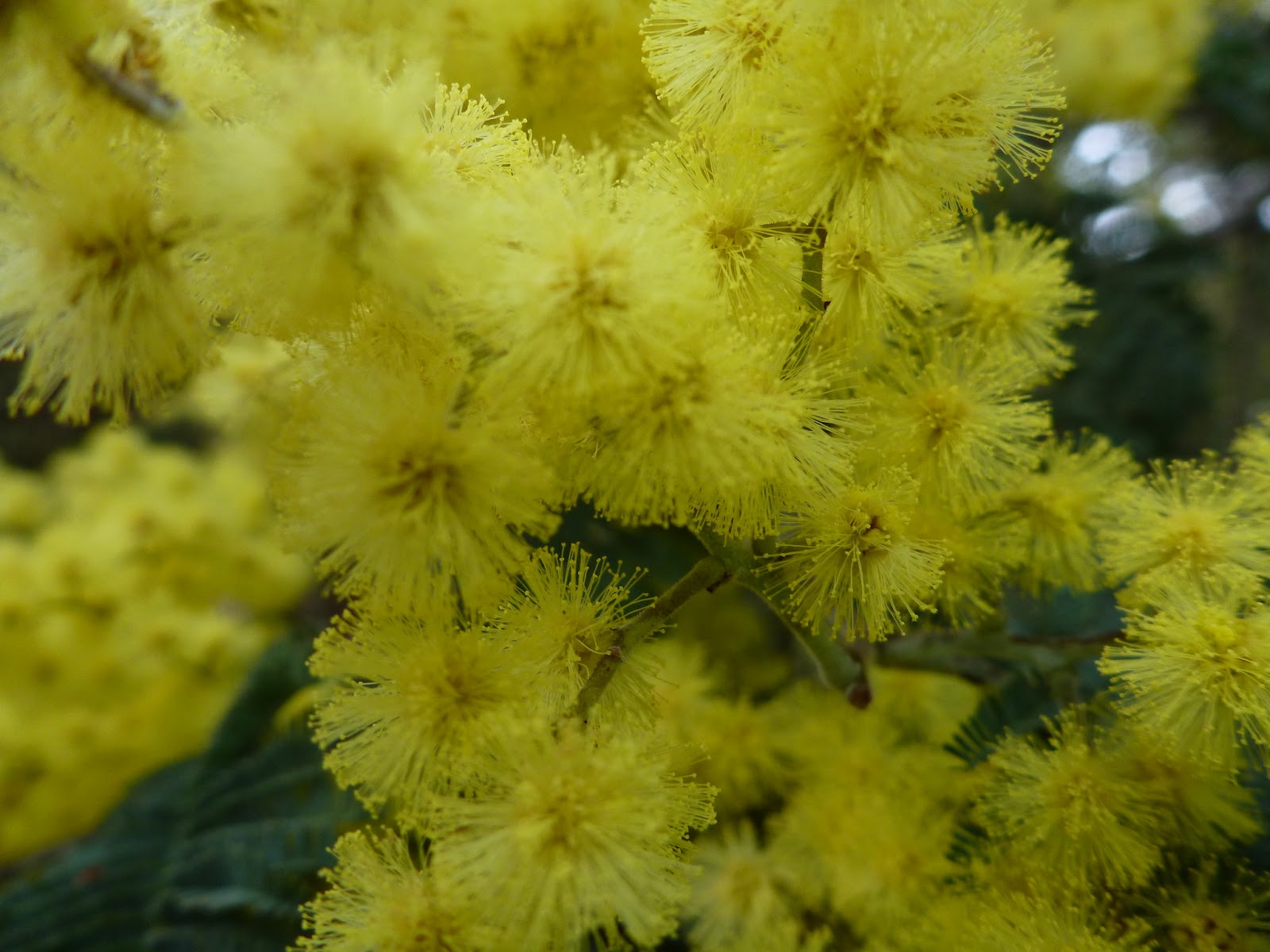 But don’t despair … there is a reason why I ended up in Sheffield, and the reason has a back-story (I’m very excited about this as I’ve never done a post with a back story).

Earlier in the week, I was watching the ABC news and saw a story about a Cable Car Proposal for Mt Roland.  Now what got my interest about this was that it mentioned a consultants report looking at a number of adventure activities to revitalise the area, including a(nother) mountain bike park proposal.

Despite my much espoused skepticism of a Mountain Bike led tourism recovery in Tasmania, this piqued my interest enough that I chased up the original consultants report to have a quick read of the relevant sections.

it could conceptually “…  link to the existing Wolfram Track ride, which is well known in the sector and popular.“

Whoa there, boyo … the which track ride?  well known to the sector??  popular???  (Hopefully you’ve picked up that the increasing amount of question marks indicate my growing incredulity at these statements).  There was a track, no, not just a track … a well known and popular track … in Tasmania and I hadn’t even heard of it???? (you got the question mark thing that time right?????)

Google was immediately consulted on this issue, and produced a reference to the Wolfram mine in the Guide to 4WD Tracks in Tasmania which did in fact confirm that there was a track out along Patons Road to the mine.  That was enough … there was a track, it looked remote and scenic, and I hadn’t ridden it.  What more did I need to know? Oh yea .. that it was well known and popular … except to me.

My weekend plans for a sabbatical on the West Coast were quickly rewritten, I pulled a GPS track of the road line from the Lemonthyme Dam to the Wolfram mine off my computer, and fast forward 5 days and you find me in Sheffield early on a Sunday morning ready to go explore a new trail.

Happy me (both because I have a back story and because I’m about to go for a ride).

Firstly before leaving Sheffield though I needed to do two things .. find a decent cup of coffee and go see if they have cleared the Tasmanian Trail section running around Stoodley Plantation.  I got a fail on the coffee (nothing was open) so headed out to Stoodley and got a win on that one.  The track has finally been cleared, though it is now all harvested on one side so is not very nice riding.

I got back to Sheffield around 8.15am only to find there was still nothing open that served a coffee, so had to abandon my plans for a caffeine fix, and instead head hungry and thirsty out to Lemonthyme Dam.  I did some mental calculations on the way and figured the ride would be about 30km return (assuming I could get some way up the road in the car) and so I should be able to knock it off and be in Mole Creek for a late lunch … I figured therefore that I’d be OK having skipped breakfast.  45kms and six hours later I would look back on this moment and punch myself in the eye for my stupidity. 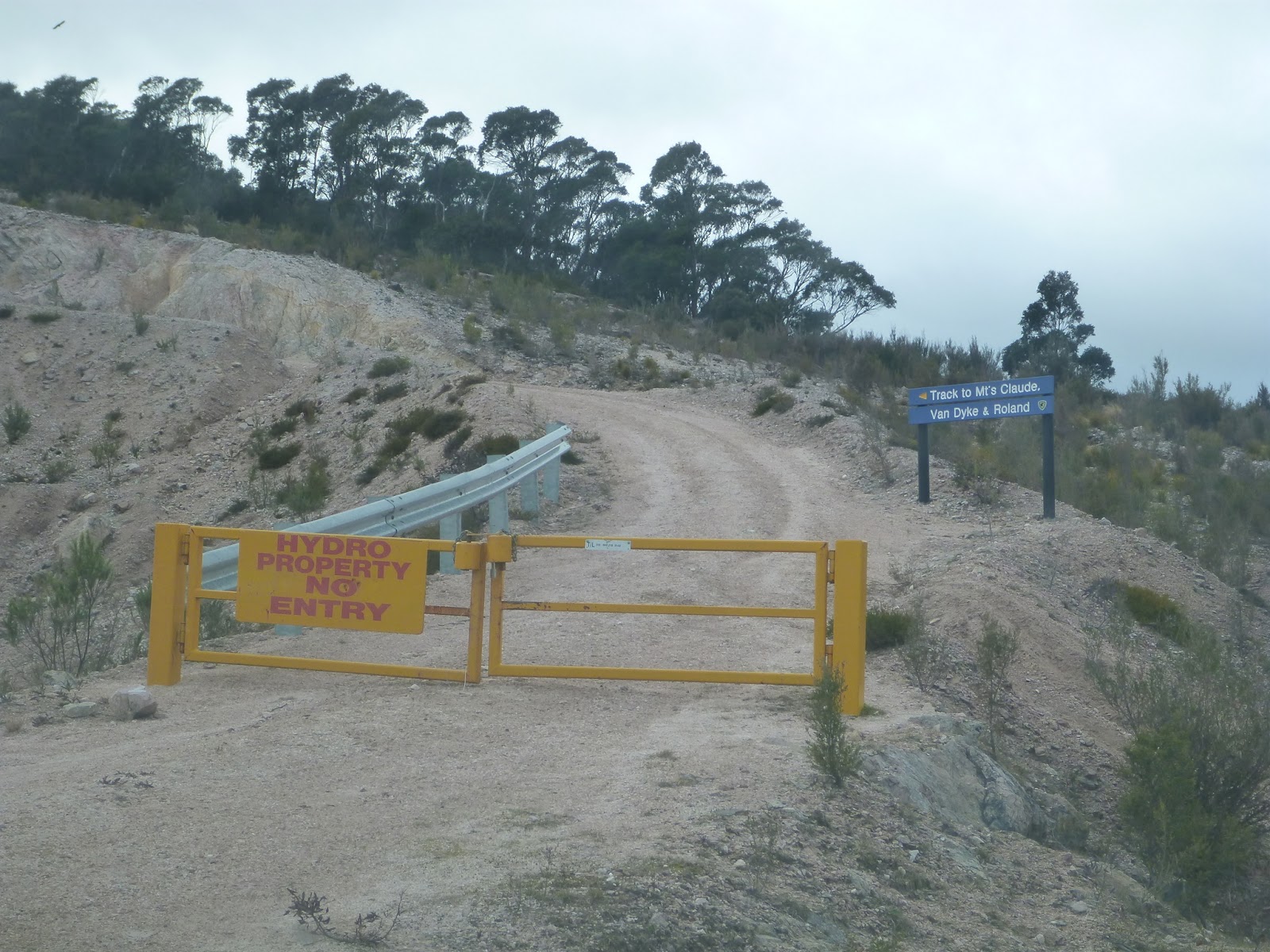 Yep, they’re developing a tourism plan for the area, meanwhile anybody that actually comes here to explore Mt Roland will see the parks sign for the walk, right behind a great “Hydro Property – No Entry” sign. Do you see why I despair sometimes?

Fortunately this was not my destination, I was headed for Patons Road … so onwards and downwards (seriously it is one heck of a descent down to the Lemonthyme Dam). 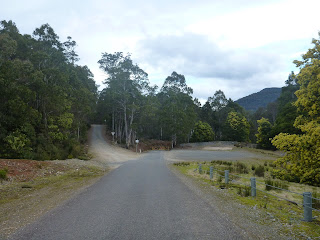 Although not signed, the start of Patons road is pretty obvious when you arrive at the dam (see pic above) … you basically turn onto the gravel road and keep driving, though there are a few turns you can miss once on the road (at the first Y junction take a left, then at the second one take a right – more details when I get this up on tassietrails.org) until about 3.5km from the dam you come to a gate.

Although you can carry on in a high vehicle clearance car for at least another 5kms or so (subject to fallen trees) this seemed like as good a spot as any to start riding to me.  OK, so I admit I didn’t want to get locked in.

About 150 metres past this gate is the trickiest navigation part of the ride … the gravel road appears to go around and up to the left, but there is actually an almost invisible road on your right (you cross a little creek and then it becomes obvious) which is Patons Road.  There are a few pieces of pink tape marking it, but if you’re looking out for it you won’t miss it.

From here on in the navigation is pretty darn easy … just follow the deteriorating gravel road.

This is a magnificent ride, and ideally suited for fit, capable (in remote situations) cyclists of pretty much any ability.  The brilliant thing about this ride is that the further you go the more the track conditions deteriorates and the funner it gets (except all of those downed trees) … but this also means it is ideal for beginner cyclists because there’s lots of good places to practice skills from rocky creek riding, cycling through deep puddles and what feels like hundreds of log jumps … and if and when it all gets too much (it never goes beyond intermediate difficulty) you can just turn around and head back.

I won’t describe the route in detail here, but it’s 22.5km to the mine, though you can probably drive further than I did and cut this distance (and the two big climbs on the way back) out. 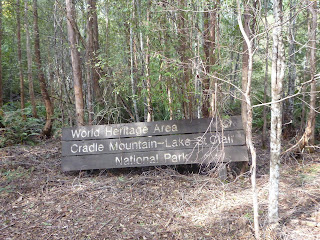 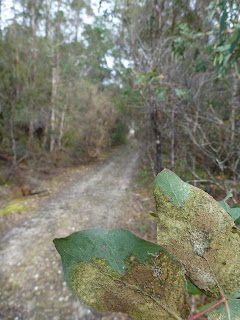 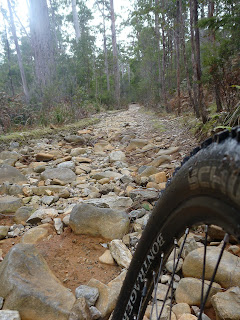 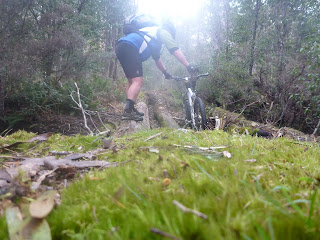 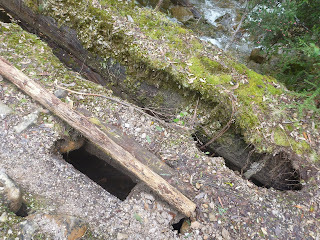 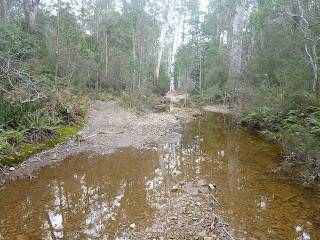 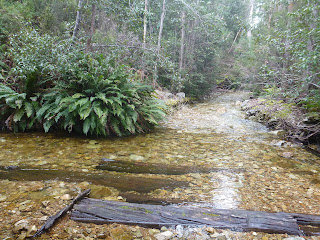 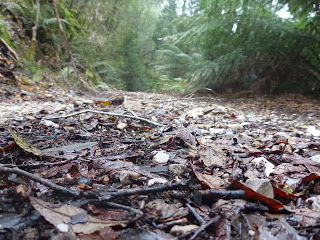 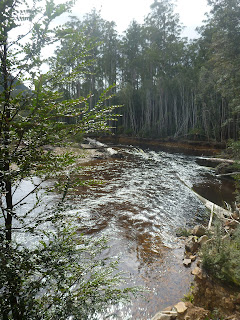 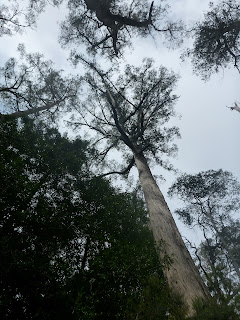 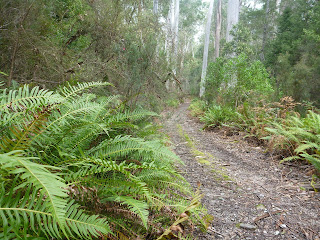 It took me just under 3 hours (with lots of stops) to get to the mine site, where I spent about half an hour having a bit of a look around.  It’s a cool place. 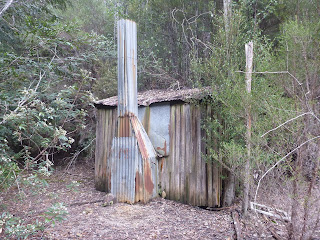 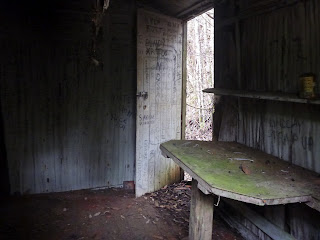 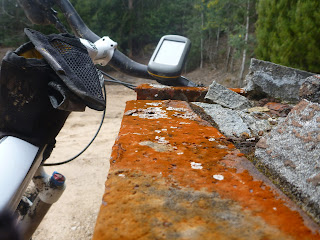 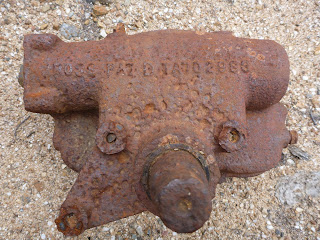 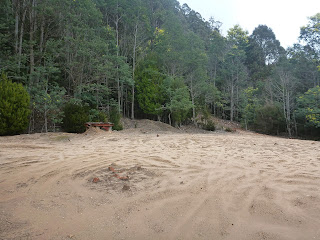 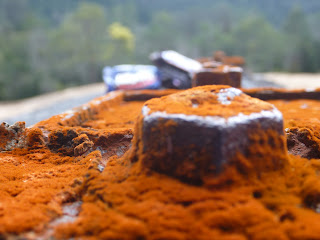 However, I was hungry after three hours of riding … problem was I didn’t have much in the way of food … 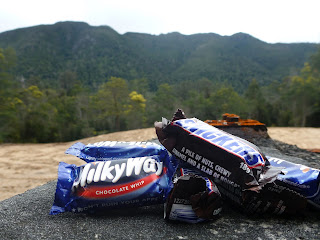 I made do with what I had, and then turned around and headed home, enjoying the ride out probably more than I did the ride in … yea it did have a lot more downhill going downriver. 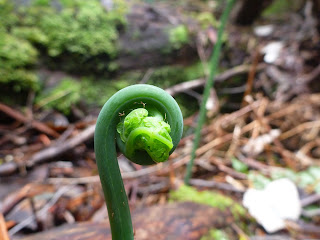 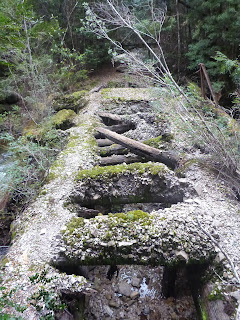 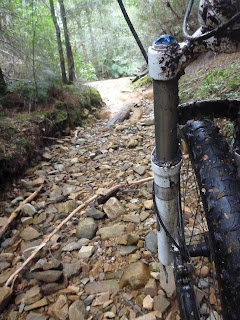 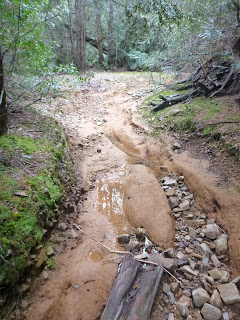 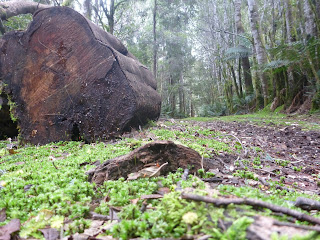 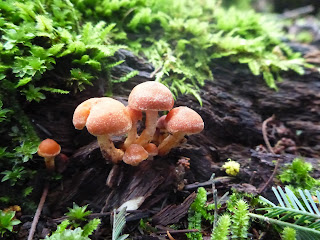 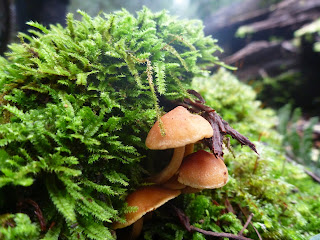 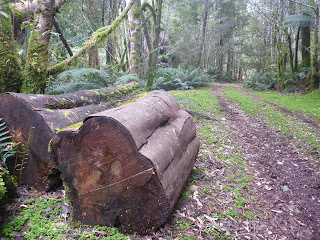 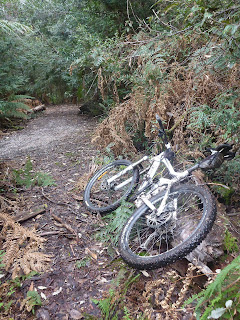 I was both a bit tired, and absolutely stoked with today’s ride.  It really is a hidden gem.  I suspect it would be more fun in mid to late summer as it would be both drier and I suspect 4WD enthusiasts would have cleared many of the obstacles I had to stop and pull my bike over, but I’d happily do this ride any time of year.  It is an adventurous ride, and you will trash your bike, even if just a little bit.

Of course the important thing now is that if and when someone says “Have you heard about the Wolfram Mine Track?” I can of course just scoff and say “Yea, of course – who hasn’t??????” and that’s all that matters.