It’s like more of me wakes when I head to the West Coast.

There are so many trails, lakes and rivers I have yet to explore over there and after several long stressful weeks at work, this weekend looked like the perfect chance to run away and spend some time in a place I love. 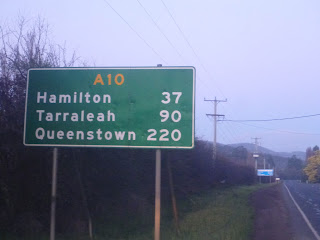 There’s a routine to the trip … The 4.45am alarm, throwing last minute items (including bike) in the car whilst still half asleep, making a coffee for the road … making it a double shot, then pulling out the driveway as quietly as I can in the pre-dawn dark.

Driving 20 metres down the road and realising I can’t see because there’s ice on my windscreen. Stopping and pouring my water bottle over the windscreen so I can see (won’t need that water will I?)  and then there’s the song … every trip has a song that resonates for that trip … Something to turn up loud and be enjoyed, so on went the radio and I got ready for the song …except all I got was adverts and stupid slow songs. That wasn’t in the routine …

Oh well, continuing on, next is the drive through and then the escape from Hobart (put that behind me) and its still just gone 5.30 am.

The drive through New Norfolk and then onwards through Gretna, Bothwell and finally Ouse.  I pull in for a toilet stop, second coffee and a toasted sandwich at Ouse before continuing on to Queenstown.  Ouse is the only place with a shop that opens early between New Norfolk and Queenstown. 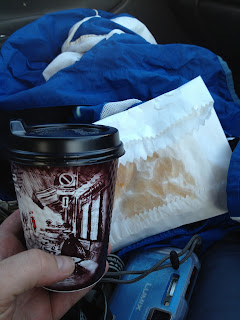 It’s from Ouse that I start to feel I’ve escaped.

The country gets more rugged and the roads steeper and more winding.  There’s the decision at the Laughing Jack Lagoon turn off before Tarraleah … do I take the 16 mile road shortcut or stick to the highway? Today I stuck to the highway.   About an hour from Ouse I pass through Derwent Bridge.  Everything (well the one shop) was closed, but I did notice that there was a new gate with a  “private property keep out” sign at the end of my Brady’s Lake ride … must remember to update the track notes about that.

As I continue on, I marvel at the peaks around me which are still covered in snow.  There was even some small pockets of ice and snow on the side of the road as I headed out towards the Mt King William lookout so I pulled in briefly to get buzzed by the cold air and to confirm that I was alive and I was here.

Just past the lookout I found my song, but it has lots of swear words in it, so I shan’t share.

Another quick stop at the Franklin River as my coffee got the best of me and needed release, then onwards past Frenchmans Cap (couldn’t see it today), past Collingwood river (all those wonderful memories of my 10 day rafting trip down there), past the bee hives along the foot of the Raglan Range and then the plunge down Victoria Pass to Nelson falls.  I was a bit surprised this mornings by the sheer volume of water gushing out of the roads edge … Could be I’m in for some very wet feet this weekend?

Ten minutes later, I pass Lake Burbury and noticed it looked particularly fine this morning.  More full than I’ve seen the lake for years and clad in a veil of patchy mist …. I almost felt like it was asking me why I hadn’t come over to explore its silken waters this weekend.   I made a mental note to myself to add “Paddle Lake Burbury” to my list of things to do on the West Coast … so much for shortening my list this weekend.

Then it was past Linda (darn, favorite cafe is closed) final twisted ascent and descent into Queenstown as I marveled at how much of the foliage has returned to this denuded land in just my lifetime. It was a good thought because it made me realise that despite how much damage we humans do, just so long as we leave an intact atmosphere, nature will do the rest, no matter how much we think we’ll destroy it.  Sorry, I’m a Malthusian at heart.

Finally, I pull into Queenstown, notice that one of the cafes has closed, and that the bakery is still waiting to open, then head into the same cafe I went to last time I was here. There’s a young couple in line before me who obviously aren;t from around here and who I later see up the road getting ready to walk up Mt Murchison, in that future time we’ll wave to each other knowingly as I go past, they understand, but in that shop we were strangers so they got their order and left without us saying a word. I grabbed another toasted sandwich and carried on – I  think I’d had enough coffee already.

I walk out onto the street, saying hello to everyone I pass as I wander up to the ATM nibbling on my toastie. as I put my card into the ATM I read the message telling me to cover the keypad as I enter my pin so no one else can see it, I look left and I look right … There’s no one even on the street at that moment.

I chuckle to myself in a way free of the burden of all the stresses of the past weeks as it dawns on me … It’s not yet 9.30am and I’m on the west coast. 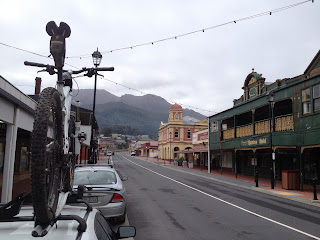 I’m home.  I’m tingling with life.  It’s time to bring out the toys and play.