It’s not like me to look at a map and come up with a blank for somewhere to go for a ride, but that’s what happened this week … the weather forecast looked atrocious and with the shortest day just recently passed, the option for a longer drive to explore more distant trails in the cold and rain didn’t look attractive.

Then Kim said she wanted to go for a ride in the snow.  That narrowed my focus nicely, and we found ourselves unloading the bikes at Mt Field National Park a bit after 9am preparing for a ride up to Lake Dobson … it was raining.

Now you can’t ride off road anywhere in the park, but I’ve always wondered how enjoyable a ride it might be to ride the 16kms up to the Lake Dobson car park.  Yes it was all gravel road, and yes you could just drive up there in your 2WD car … but still I wondered …

We set off up the hill, and it was soon apparent that the only challenger to Kim for the King (Queen?) of the Mountain prize today would be the snow plow that passed us about a kilometer up the road. 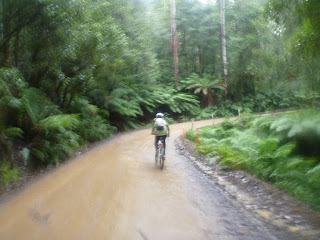 I struggled going up, I mean really struggled.  Kim was riding me off her wheel so easily it was embarrassing.  Mind you I’m probably carrying 40 or 50kgs more up the hill than Kim is, so it’s not hard to figure out why.  What happened to that diet of mine again?

Kim provided some amusement by crashing her bike several times as she learned the cons of being cleated into her bike (for her firs time), but the real highlight of the ride was the scenery, and to be honest (having driven up this road many times) I was really surprised at just how gorgeous this ride was.

The first five kilometers were mainly through mixed eucalypt forest with a rainforest understorey … which means that as you climbed up the hill you were surrounded by ferns and myrtle forests at eye level interspersed with giant eucalypts erupting into the sky.  It was gorgeous cycling and really helped the kilometers pass by. 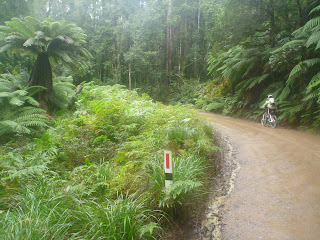 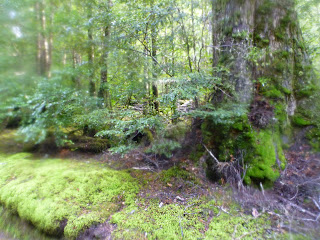 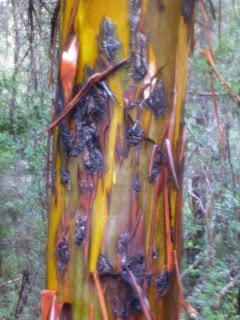 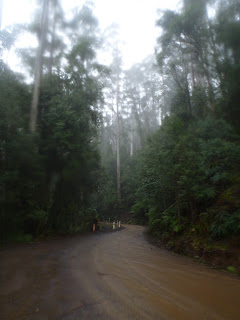 Unfortunately, most of my photos for the day were washed out by water on the lens, a problem I just haven’t been able to figure out how to overcome, and yes I have tried drying the lens.

We passed a small lookout about 5kms up and the transition to higher alpine forest gradually began soon after.  It was another few kilometers before we got our first tantalising glimpse of the snow, but what started as a sporadic glimpse soon turned into a thick, velvet coating.  We even had it falling around us as we slowly made out way up to the top.

By the time we passed Lake Fenton, we were well and truly in the thick of it, and so had plenty of excuses to take rest stops and shoot off pictures. 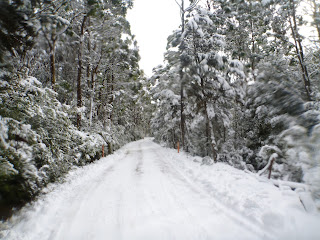 The road finally started to flatten out (it’s close to a 1000 meters of climbing) about 12kms from the start, but unfortunately we emerged out onto the plateau to be greeted by a horrid headwind and it was a real head down grind getting across the top (invigorating was the word Kim used).  Fortunately it was only a short while before the sun came back out for the final kilometer or two to Lake Dobson. 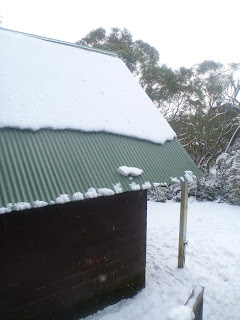 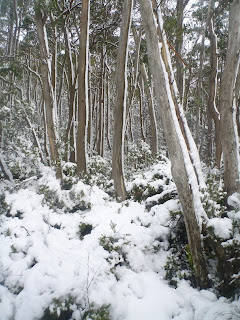 There’s a great day shelter at Lake Dobson, though unfortunately no fireplace, and so despite being out of the elements we both started noticing the cooling effect of the wet gloves and socks (though again Kim was quick to point out that for her it was only ‘invigorating’).  Regardless, we only stayed up top for a short while before starting the ride back down.

It was really quite pleasant and warm as we headed back along the plateau due to a couple of small climbs to keep the body working and the scenery, whilst slightly desolate, was just wonderful.  I particularly liked this sign which allowed you to fill in the blanks … nature’s censorship perhaps?

However, once we got past the snow line at Lake Fenton, our speed began to pick up and our fingers and toes .. became invigorated.

Just after passing the lookout on our way back down, Kim kindly suggested I carry on ahead as she was worried that the car might be getting lonely all by itself, and being the lovely and kind person that she is she wanted me to get there soonest and make sure it was OK.

As a purely circumstantial outcome of her generous idea, by the time she pulled up a few minutes behind me, the car was all nicely warmed up and so she was able to climb straight into the passenger seat and get changed into her dry clothes under the warming heat of the cars fans … whilst I got changed in the cold toilets and loaded her muddy bike into the back of my car … the least I could do given how generous she had been.

We drove up to the cafe to stand by the fire and have a hot drink before we drove back to Hobart … invigorated.

I hadn’t really expected much from this ride, but it turned out to be brilliant and I can’t wait to go back and do it again … maybe with an extra pair of socks and gloves and a hot thermos though or during summer.

For now you’ll have to excuse me, this ride deserves to be added to tassietrails.org. 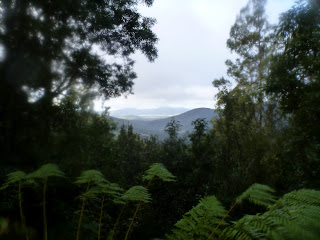 I went shopping on wiggle last night and found they had a 40-50% off sale so I picked up a pair of SealSkinz thick mid length socks and SealSkinz Handle Bar Mittens.  Here’s to future warm feet and hands.