Skip to content
We live in a crowded world, and this is never so apparent than when we seek solitude and silence in those few wild places that remain to us. 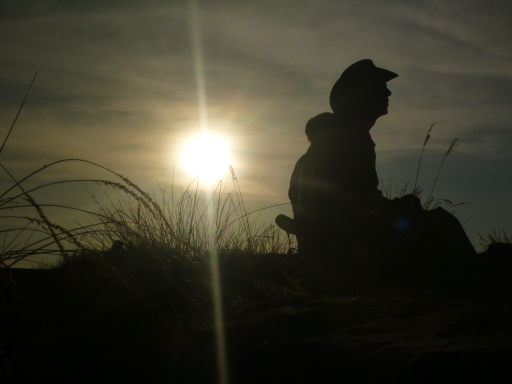 After our little hiccup with Qantas, we finally got to Darwin around 5pm, three hours after we were supposed to arrive and 30 minutes after our vehicle rental place shut for the day.

We gave Apollo a call anyway, and they said we could pick up our vehicle if we came straight over, but it would cost us an extra $75. We considered this for a few seconds, and then figured that given Qantas had already stumped up for our accommodation for the night we’d just pick it up in the morning.

As it turned out this was a fortuitous decision, both because it took us another half an hour to finally locate our luggage (the Qantas staff had helpfully locked it in the baggage office, and then left for the day) and as we were to find out the next day, our assumption that Apollo was located at the airport was a wrong one.

This decision was further vindicated when we discovered that Qantas had also stumped up for our dinner and breakfast as well, so as we sat out on the deck of the pub next to our hotel enjoying steaks and cold ciders courtesy of Qantas, we decided that really this wasn’t such a bad start to our holiday after all. 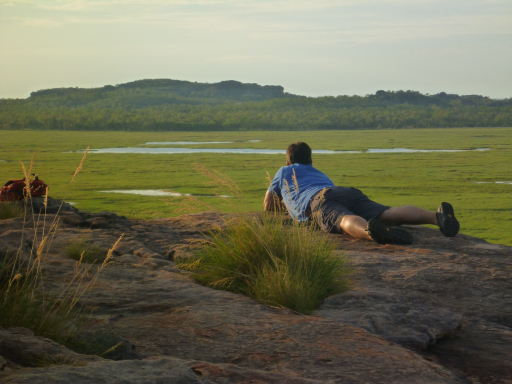 We forked out the $25 for a cab fare to actually get us to their offices and it couldn’t have been another hour after that that we were on the road following GyPSy (my trusty, but forever inaccurate Car GPS) to the nearest Woolworths … Which just happened to both be in the exact opposite direction to which we wanted to go, and a Woolworths liquor outlet, not a supermarket, to boot.

Because of this detour, we ended up missing the 11am crocodile cruise and rather than wait another two hours for the next one, decided to carry on to Jabiru and come back and do the cruise on our way back to Darwin.

Arriving in Jabiru, the parks visitor centre confirmed what my mate Tim had emailed me the previous day … There was still about 40cm of water on the road out to Ubirr, our planned destination for the day. The very helpful parks lady assured us that it was only a couple of short sections of road underwater, and that we’d have no problems getting through it in a 4WD, so after another latte to fortify my courage and a reassurance check that the road we were about to ‘go’ down was colored green for go on our rental vehicle map we set off to Ubirr …. heart in mouth. 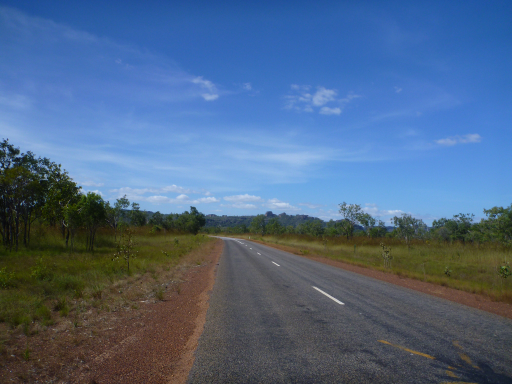 I should explain at this point, that last time I drove a car through a creek was back when I drove up to Alice Springs and Uluru in 2008. We had driven out along the west McDonald ranges and decided to take the backroad down to Uluru.

It was whilst crossing a creek on this road in the middle of nowhere that my car engine cut out on me and died. It was only luck that got me out of that situation, and so I am understandably nervous about water crossing in vehicles … especially when all of the creeks up here have crocodile warnings next to them … A challenge I didn’t have to deal with down at Alice Springs.

Fortuitously just as we pulled up at the first water crossing two proper 4wds also arrived from the other direction and I was able to watch them cross, before committing to it myself. There’s nothing wrong with being a pragmatic hero … Especially when you have a $7500 excess on your vehicle rental insurance. 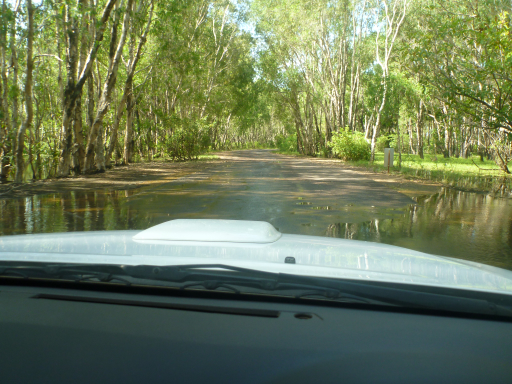 We got across the second, slightly longer, crossing equally as well and I was feeling pretty proud of myself until we passed what Kim assures me was a Hyundai Lantra Sportswagon heading back along the road.

If this wasn’t enough to crush my ego (which it most certainly was) there was also an AAT tour bus sitting in the car park when we arrived at Ubirr. Sigh.

Putting aside these dents to my heroic self image, we headed off for a wander around the rock art and viewpoints at the site, taking our time to just enjoy and relax. 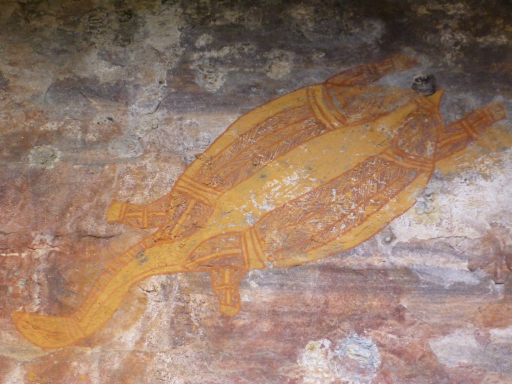 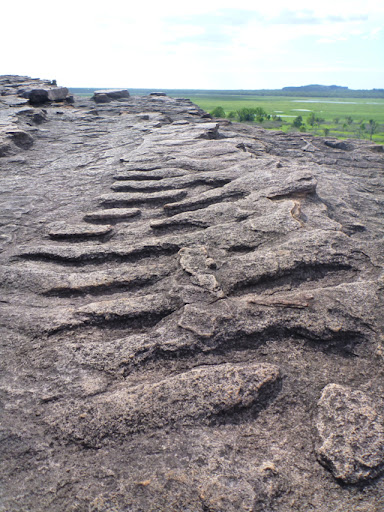 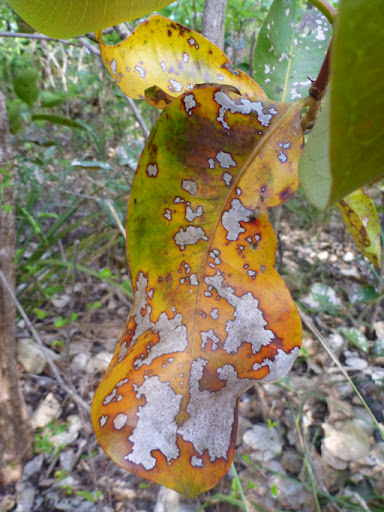 After a very late lunch (which may be the subject of a separate post) we wandered back up to the lookout to watch the sunset and enjoy this beautiful area. 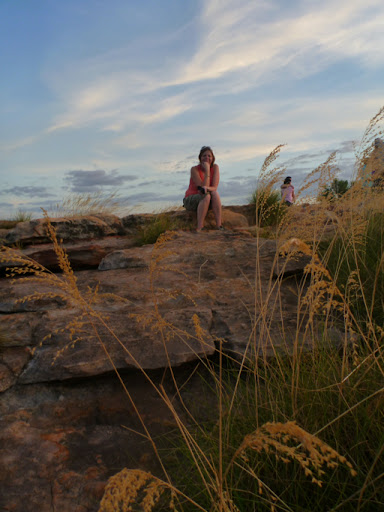 That’s where the crowds came in. At first it was just a few couples and the ranger, mostly content to settle into a free spot and sit and quietly chat as the sun moved lower to the horizon.

But then an Asian group turned up who were obviously having a wonderful time as they shouted and laughed and took photos everywhere, an enjoyment I don’t begrudge them, as I silently reflected on the apparent differences in our cultures and how we react differently in the way we are attuned to our impacts on those around us.

At around the same time, just to prove me wrong, an Australian family turned up with two young, hyper-energized kids who joined in the general fracas of noise which had descended on our quiet lookout.

I continued to try and be tolerant and just attune into my own reasons for being there as I looked out over the sun setting on the wetlands in front of me, but what I saw instead was an Indian or Pakistani group who instead of sitting with everyone else, had moved themselves out onto a point in front so that they would have an unobstructed view of the sunset, whilst seemingly oblivious to the fact that they had just destroyed everyone else’s view in the process.

Minor things I know. The sun still set, and the stars still came out and by maneuvering myself and my camera I was still able to take some nice shots of the setting sun. 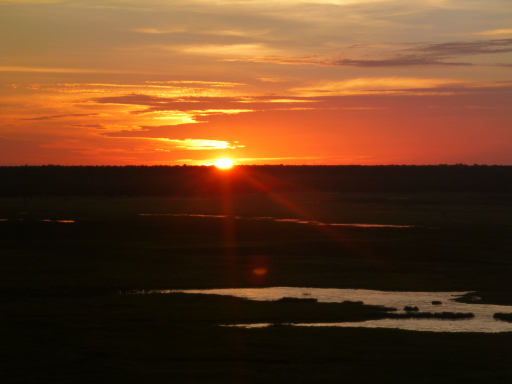 But the truth is these photos are a fabrication, a deceptive lie of the beauty of that night as in the click of a shutter you can edit out the crowds, the noise and truth be told the poverty of excitement that that sunset delivered compared to so many I had seen before.

I left happy I had visited, but at the same time feeling like a lost hermit in a crowded world. 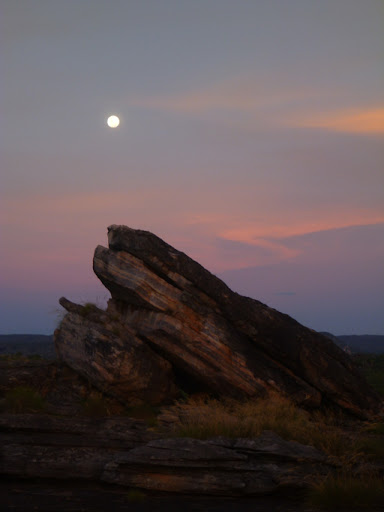