Skip to content
“I used to have a comfort zone where I knew I wouldn’t fail
Those four walls were really more like jail.”

There’s a moment in the chaos of the seas where you know that your brace just isn’t going to save you: you’ve passed the tipping point of your skills, and you have to move from the effort of staying upright, to the moment of committing to an exit. 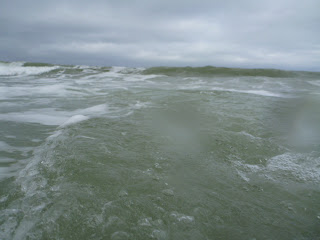 I’ve always found that moment both terrifying and yet strangely exhilarating:  It’s only when you fail like that, that you really know you’ve gone beyond the limits of your skill and that’s when you learn where your limits are for next time … unless you die, I guess.

I made a commitment this year to improve my paddling skills, particularly in big water, so when Stephan rang me on Friday to say that BOM’s forecast explorer was predicting 15-25 knot SW winds and two to three metre swells coming into Frederick Henry Bay the next day, I immediately said I’m in … then I hung up the phone, realised what I’d just done, and spent the next 12 hours trying to think of ways of getting back out again. This was the kind of forecast, if I were going on a sea kayaking trip, where we’d all sagely agree to postpone the trip to another day.   This wasn’t paddling weather.

However, despite my repeated attempts to subtly talk/bribe Steph out of the trip (coffee Steph? what about I shout you lunch?), and despite millpond like conditions on the Derwent when I picked up my boat, I found myself standing at the top of the dunes at Seven Mile Beach looking out over long sets of big waves crashing in on the shore and seemingly endless white caps coming in behind them.  It was about this time I thought it appropriate to facebook the rest of the world to let them know if I died in the next few hours, then it was Stephan’s fault (My apologies to anyone who is still resisting the use of the word ‘facebook’ as a verb).

I tried one last time to suggest to Steph that this may not be one of our better ideas (and if you knew our record of brilliant ideas, then you’d know that that was a shouted understatement) and maybe we should rethink.  My suggestion was of course greeted with an “I’m going, your choice what you do.”  The glorious thing about Stephan is that once he decides to do something, he does it.

So, thirty minutes later I found myself struggling to get my boat onto the water at Cremorne, as the wind buffeted me one way and then the next, but eventually we were on the water and poking our noses out of mouth of Pipe Clay lagoon to see what the weather had in stall for us.

The first section down to Lauderdale wasn’t too bad, with 1 to 2 metre swells (mostly at the smaller end of that range) coming in behind us, but there were a lot of seas and cliff bounce coming at us from all directions leading to lumpy and uncertain conditions.

It was however all manageable until we cut out across the Lauderdale bay and suddenly found ourselves at the mercy (or not as the case turned out to be) of a very strong cross wind and building side seas.  To say the water conditions were large and building was a bit of an understatement.  Let’s just say the forecast was feeling pretty spot on from where I was sitting.

In between the odd moment of terror it was also however rather awesome fun, and I caught some of the steepest, fastest waves I’ve ever been on.  Then after negotiating a hundred waves before it that weren’t really that different, I suddenly got hit by a side wave as I was surfing down a swell front, I put down my paddle for a brace, felt it bite, and expected to rebalance, but instead the back of the boat kicked out behind me, my paddle moved out in the water and I entered that moment where I new I wasn’t going to save this one.

The next moment I was under the water.

I came up to the surface, huge smile on my face, grabbed onto my boat and prepared to jump back on and keep going when it suddenly occurred to me just how bad these conditions were … and why the sea skills always say to practice your self-rescues in the conditions you expect to paddle in … not the swimming pool.

I attempted a scramble rescue, and got in, but couldn’t get my paddle into the water quickly enough to brace and so found myself ungraciously dumped out the other side of the boat, however this time the leg rope had managed to wrap itself right around my legs, effectively tying them together.

This wasn’t so good.  The boat was now upwind of me, so kept getting pushed on top of me by the waves, so I was having to hold the boat off with one hand and hold my paddle with the other, leaving me no hands to actually untangle myself.  Did I mention that this wasn’t good?

Eventually after lots of contortions and many dips under the water I finally managed to untangle myself enough to scramble up for another unsuccessful attempt at a scramble rescue (much harder from the downwind side) before falling out again, thankfully this time on the upwind side.

Now, somewhat fortunately for me, I’ve recently become an avid reader of the USA based Sea Kayaker Magazine which has a brilliant article in each issue on ‘accidents’ where people got themselves into trouble, what happened and what could have been done to improve things.

I had just read the latest article about a guy who tried to do a scramble entry (hey, that’s where I got the idea from) who ended up exhausting himself repeatedly trying to do the same rescue instead of stopping and resting for a while and re-evaluating the situation.

I took a moment to remind myself that I was attached to the boat, I was warm, I had a paddle partner nearby … so there was no rush here.  Instead of launching into a third attempt, I instead lay on the back deck to catch my breath, waited for Steph to paddle up, rested a bit more and then did what I should have done in the first place … I did a side-sit entry, landed it the first time and paddled off.

I was initially a bit tentative after that, but a few minutes later I figured “bugger this” and set off in pursuit of some more runs, and let me assure you there were more than enough of them out there to be found.

All good things come to an end, and we eventually got back to the beach, and suddenly had a whole new problem – how the heck were we going to get in there? I recall reading a few articles recently about sitting outside the surf zone and counting the sets as they came through in order to be able to pick the lulls between the big sets and paddle in on the back of these, but having just seen three huge waves crash on the beach and seeing what appeared  to be a fairly benign set of waves coming in behind me, I figured “this is my spot” and took off for the beach.  It was all going OK, though I had underestimated how quickly I would be able to go, I assume because of the water coming back off the beach, but I was feeling confident enough in my approach that I looked around behind me to see how Stephan was going.  What I saw instead was a huge wave building right behind me.

It had come seemingly from nowhere, and it was one of those moments when I knew that that wave was way too big for me to handle.  At the same time my quick calculations made me realise I could neither outrun it nor could I back paddle enough to get back behind it.  This was my wave like it or not.

I felt it start to pick up the back of the boat, even as I was already paddling full force forward hoping in vain that I might be abler to run with it for a while, but it was a wave too big, a wave too steep, and it flicked me around like flotsam.  I still had the sense to lean into the wave and get my blade down for a brace, but being in a ski, I just wasn’t connected to the boat strongly enough and almost instantly I was in the water, paddle in hand and my boat nowhere to be seen (I had unclipped before coming into the surf zone).

As I started to make my way into shore trialling a new “swim using your paddle technique” I’d also recently read about (I am taking my sea skills study seriously) I  also saw Stephan kicked out of his boat by the surf (Small, silent yay from my savaged ego). 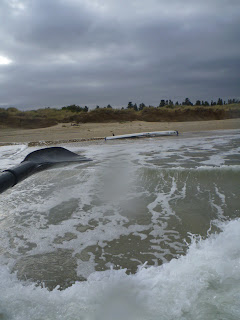 I eventually made my way onto the shore to be reacquainted with my boat, before starting the hike back up the dunes to the car and some warm clothes. 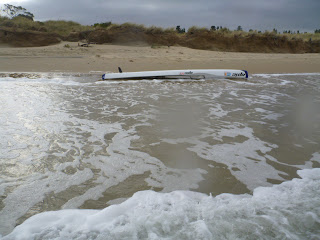 What a sweet day … big waves, big wind, new boundaries, and of course plenty of time to plan the next adventure as we drove back to gets Steph’s van  …  God, it’s good to be alive. 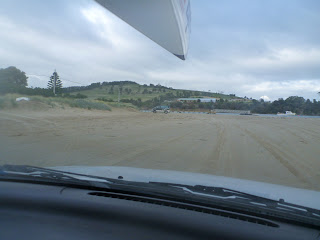