So, after spending nearly a week avoiding waterholes for fear of crocodiles, and then after seeing the awesome speed and power of them in the wild, Kim suddenly decides that we just have to go swimming with them.  Hey, apparently (in case you have forgotten) it’s her Birthday Week and she can do what she wants to.  Cue my wallet (I kid, I kid). 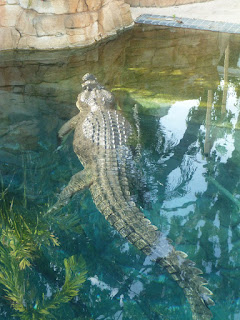 So, we rock up at Crocosaurus Cove at 9.30am only to be told that the next available cage slot is at 4.30pm.  Darn.  Anyway, we fork out our money and have a look around before heading off and having a look around Darwin City (and more importantly the big Billabong Sale being held out at the showgrounds).

I can’t string this one out – put simply, the hype is well above the reality.   To explain the experience, you climb into a perspex type cage which is lowered into three pools of water with different crocodiles in them and then you see what they do.

We watched a couple of people before us, and in both cases the crocodiles didn’t even move – they just sat on the side of the pool and did nothing – we had a better view of them from outside the cage.

These crocodiles are obviously smart, and they’ve figured out long ago that it’s a pretty pointless exercise attacking the cage and although we probably got one of the best sessions of the day having two of the crocodiles swim past us, one of them right up against the cage, it was still a fairly lame experience especially after the Adelaide River cruise the day before.

And just for the record, I tried everything from banging the cage to smiling at them (hey, they say never smile at a crocodile) to try and get some response, all to no avail. 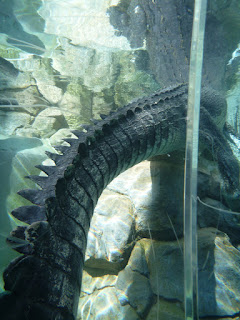 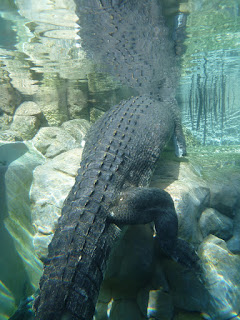 To be honest, the scariest part of the experience (other than the $100 they wanted us to pay for the photos they took) was the blowfish that I got stuck in the cage with …

Definitely a tick box activity, although it was probably exciting in the early days when they first started doing it.  I have to say that the ‘cage of death’ moniker is probably in need of a serious overhall. cage of dearth perhaps?