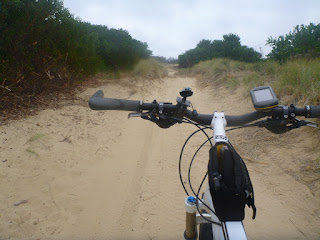 I had checked the tide charts before leaving Hobart and found that low tide was at 3pm today, so had planned to try and do a ride from Blackmans Lagoon to Tomahawk.
The plan was to head out to the beach, follow this  to South Crotties Point from where I’d follow the track into Homestead Road, which I’d then follow out to West Tomahawk Beach which I planned to follow to Tomahawk itself, returning to Blackmans Lagoon via the highway.  I knew there would be some rock hopping towards the end, but otherwise it all locked possible.

Problem was, with the Scottsdale Rail Trail ride taking as long as it did, I didn’t get out to the start of the planned ride at Blackman’s Lagoon until around 2.30pm, whereas I had hoped to get there closer to noon.

I knew this area fairly well, having spent many nights conducting electric fences trials up here on a nearby property (Lowly), however I had never been beyond the camping ground at Blackamsn Lagoon so had no idea how hard or easy the almost 3km trail out to the beach would be, however unpreturbed by the lack of knowledge, and assuming it would all work out for the best … I refilled my water bottle and set off.

I cruised the first few hundred metres with my confidence rapidly growing, but then came to a grinding halt as my wheels dug into the soft sandy track for the first time. 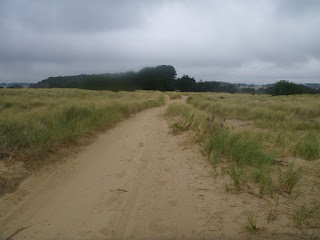 Turns out that was pretty much the end of my riding out to the beach as I pushed my bike for the majority of the rest of the way only being able to occasionaly ride short sections.  However it was a nice enough track and if time hadn’t been so against me then it wouldn’t have worried me – heck, let’s be honest – it didn’t worry me anyway:  I was just enjoying the sharp contrast between this track and my earlier riding.  It was nice to be out on the coast. 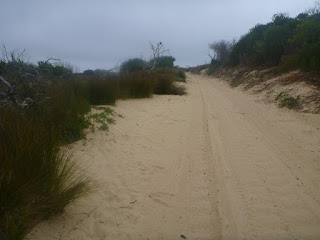 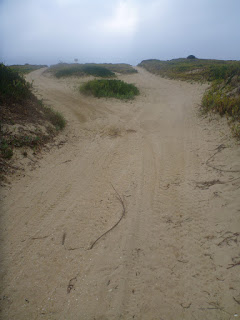 I travelled nearly 1.5km before I finally saw the beach in the far distance, and it was another kilometre or so before I finally heard the waves crashing down. I think it took just over 30 minutes to get out to the coast where I was greeted by a wonderful low tide having arrived smack bang at 3pm.

Despite finding a sign at the beach indicating that 4WD and motorbikes should not proceed north beyond this point, I justified turning my wheels in that direction by the lack of clear direction for bicycles (note: I have since sent an email to PWS to see if bicycles are allowed on this beach, but haven’t yet heard back).  I also confess to a complete lack of desire to push my bike all the way back to my car along that trail.

Having made this decision, and after all that pushing, I’d love to tell you that the next 4kms of riding was along hard packed sand with the wind at my back, but the truth was that the beach was a bit of a minefield for a cyclist with lovely long stretches where I flew along, but many others where I found myself mashing my way up and down the beach trying to find some solid sand to ride on.  Towards the end I often found myself having to ride right out on the wave line to stay on a solid line (my poor bike).  But the workout was good, and the open air and remoteness of the location were just sureal.  I was again in heaven.

The turn off the beach onto South Crotties Road is obvious and easy to find as it is right at the end of the beach as you come to the headland, and fortunately there’s only 50 or 100 metres of soft sand before coming onto hard gravel.

From the beach it was about 4.5kms out to Homestead Road, where I  re-assessed my ambitions (it already being 4pm and with over 30kms to go), and decided instead to cut back down Homestead Road straight out onto the highway and then back to Blackmans Lagoon.

This shortened circuit still ended up being around 25kms and took around 2 hours to complete at a fairly leisurely pace.  I was however glad that I went the way I did as I wouldn’t have gotten back until well after dark otherwise and I only had a head torch and high-vis vest with me on the ride.

I had planned on camping up this way for the night, but instead decided to head down to St Helens and join Stephan and company out at Dora Point where I’d already have a tent set up and a campfire blazing … so it was with an hour and a half drive in front of me, and pondering how blackman’s lagoon managed to keep its name through the politically correct decades just gone that the seed for the black footed mob planted itself in my mind …