Thank God for GPS, because without those beautiful little machines this post would pretty much read “I went up to the North East, search for the new Scottsdale rail trail, didn’t find it and left“. Whilst this may be good for anyone reading this who is short of time, it kind of defeats the purpose of blogging, and hence my original statement: thank God for GPS.

After an early start from Hobart, I pulled into Scottsdale around 9.30am and continued confidentally on towards the Tonganah end of the new rail trail that the Rotary Club was building up here.

I was pretty sure of finding it having been out to Cuckoo Falls a year or two ago, and so was somewhat surprised when I pulled off onto Tonganah Road (about 8km out of Scottsdale on the right hand side where it’s sign posted to Cuckoo Falls) and pulled up at the rail crossing only to find it was still there … by which I mean the line itself was still there and there were no obvious signs of any conversion to a cycle track having taken place.

Not to be detered (OK, I was a little detered) I decided to drive to the other end of the rail trail at Ringarooma/Legerwood given that by a process of deduction if the new section of trail wasn’t at this end then it must be at the other end.

Turns out I was wrong.

I followed Snake Track down into Ringarooma and could clearly see where the old rail line used to run through farming properties and behind the town, but there was no obvious new track work anywhere.  I pulled up in town, scratched my head a bit and realised that I was now detered.  Could it be that the trail hadn’t been started and this was a very long, wasted detour?

I turned around and drove back up Snack Track paying very careful attention to the railway crossings, but I only confirmed what I’d seen on the way down – this track hadn’t been touched in what looked like decades.

I came back onto the highway and then turned up the first track I came to 600 metres further along the road on the way back to Scottsdale (marked Monna Road on Google Earth, but signed “Tulendeena 1” on the ground) thinking this was the rail trail.

I drove for about 300 metres along this track before checking my GPS and finding out that somehow I had driven straight across the rail trail, so turning around once again I drove back to the start of the spur road and then on foot finally found the rail trail disappearing (rather unpromisingly) off into the bush right next to the road.  I walked down the trail for a hundred metres and concluded it looked even less promising than it did from my car and it was definitely completely untouched.  However, having completely run out of all other options, I parked my car out of sight, jumped on my bike and took off for what I expected to be a rather short, wet, dead-end ride .

Turns out I was wrong – again.

It would be nearly two and a half hours before I got back to my car, and I’d cover 30kms and lose and gain  nearly 500 metres in altitude in the interim.  I’d found the rail trail!

The first few kilometres were rough and overgrown and I loved every second of it.  It’s basically downhill in this direction, with lots of beautiful bush, log hazards, track diversions and photo opportunites galore – I was in heaven (this blog is getting a bit of religous theme which is concerning): 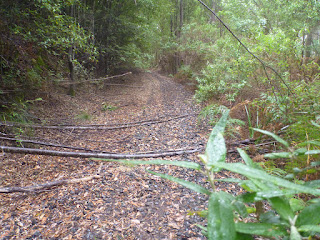 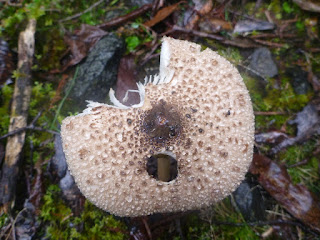 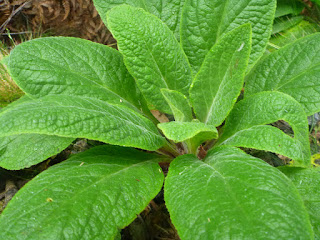 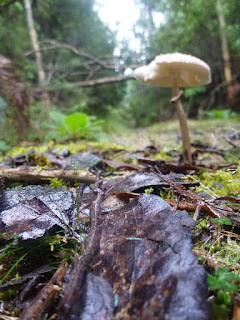 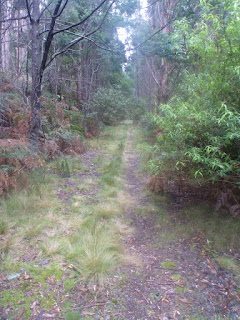 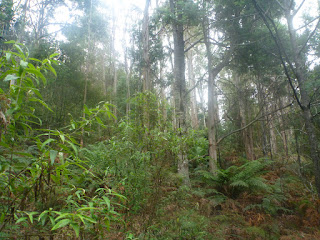 However this all came to a crashing end when I emerged out onto a major gravel road.  I think I had finally found the new rail trail.  My beautiful little track became a rough, rocky road and continued this way for the next 10kms. 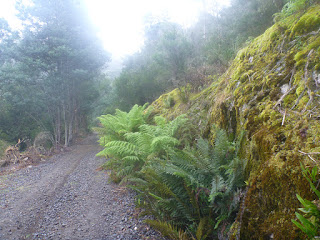 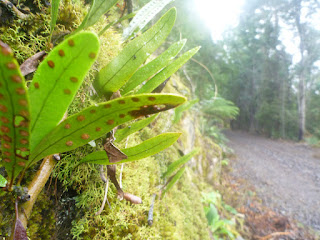 It did however continue through some beautiful forest and through gorgeous railway cuttings and of course I barely had to turn a pedal to keep moving.  It would be hard to lose the trail, though there was one section that came out at an old station where you need to turn left (pretty obvious, don’t drop down the gravel steep road). 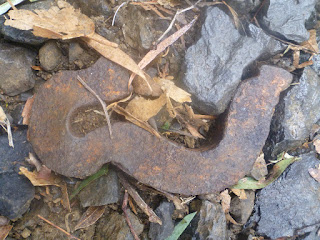 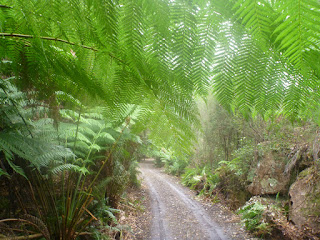 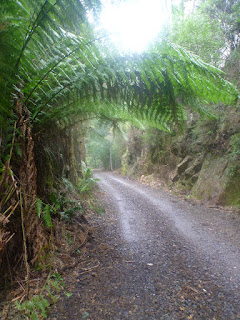 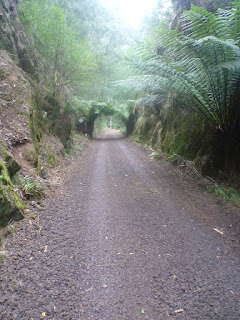 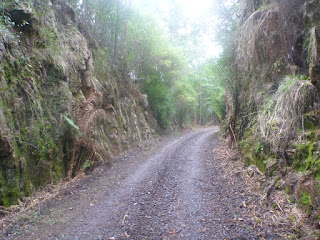 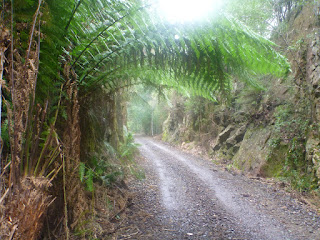 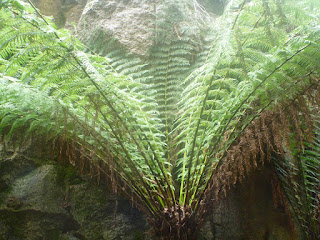 The trail eventually moved out into drier, more open bushland and it was here that I came around a corner and met another cyclist coming in from the other direction.  We got chatting, and it turns out he was one of the guys helping put the trail together.  He was rather skeptical (OK, he didn’t believe me) when I told him where I’d come from, absolutely adamant that you could only go 8km up the track.  I even showed him my GPS route which clearly indicated I had come 13km, to which he firmly declared that I had got lost and must have been on some roads.

That aside, I found to my rather immense relief that the reason the track surface was so rough was because they had only pushed the track through and laid the foundation.  They were still to put the surface gravel on, a situation which will greatly improve the riding.  I was also informed that the trail ended about 200 metres further along at a mud quarry where the line was lost and that I was better off to turn down a side track and follow that to the highway.

I thanked him for his advice and continued on myself to see how far I could get and to sate my curiosity over where the trail line actually ended.   Turns out he was partly right:  The rail trail continued for a further 1.2km before ending at a dam with multiple trails heading off in several directions, but hey where there’s multiple trails I wouldn’t call that an ‘ending’.

I chose to push my bike up an obvious track running up the hill to the left of the dam and followed this for 300 metres before it emerged out onto a major gravel road (turn right) which I was then able to follow back out to Tonganah Road another 1.4kms downhill.  From there it was another 700 metres back to where this all started at the Tongana end of the Rail-line.

Curious as to where the trail line went, and feeling a bit bolder now I knew where the rail trail was, I cycled up along the railway line for about 600 metres until it dropped me out behind a sawmill.  From here I was able to use my GPS to easily naviagate a criss-crossing series of gravel roads back up to the dam and back onto the railway line. Curiously I then took several wrong turns as I backtracked to where I’d met Mr Man and belatedly took his advice to exit via a side trail.

It was good advice as I followed a fun, sandy descent initially under some powerlines and then out through bushland to the main road about 2kms away. 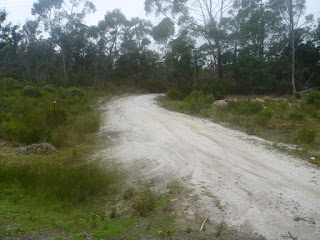 From there it was a simple matter to just follow the highway back to my car – simpler but much steeper. It was time to pay for all thos kilometres of fast, easy descent.

I chose this option as it was much shorter (7.8kms) and to be honest as much as I enjoyed the rail-trail it did get a little repetitious towards the end and the return journey through farmland and along bitumen road made for a nice change.  I even enjoyed the uphill effort – well the first 6 or so kilometres of it.  The last bit was a beast. 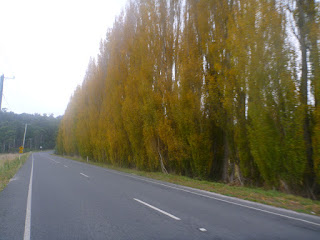 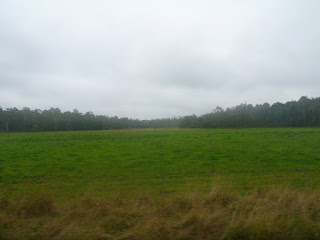 So all up, I think this is going to be an awesome addition to the cycling trails around the State – once it’s finished.  It’s a rail-trail though and so it’s aimed at that market segment, but that said a look at Google Earth clearly shows a good network of trails running through State Forest and under the power lines which I suspect could be linked into an even more awesome circuit.  I will also be slightly disappointed to see my lovely little section of overgrown track vanish, but hey, I’ve got the memory.

My GPS track can be viewed here.

Still, once that gravel is in place I’d rate this one a 4 out of 5 for pleasant, easy riding – especially if you can organise a car shuffle.  However, for me the day had just begun.  It was time to head to Waterhouse and some coastal riding timed with low tide at 3pm …