I was supposed to be competing in a 12km paddle race today, but just didn’t have the desire so instead pulled out one of my ‘backup’ plans … my backup plans being a list of  rides and walks, most fairly close to home,  that I’ve been meaing to get to “someday”.

Apparently today was the “someday” for the Wellington Ranges circuit.

Today’s ride started at the Grove Store, which is on the way down to Huonville.  The route I’d choosen headed out through Crabtree to the start of Jeffrey’s Track.  Although on the road, it was actually quite a pleasant ride and a good warm up. 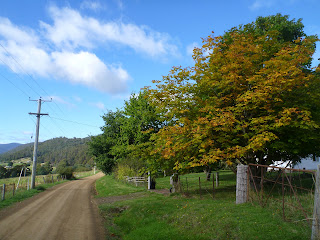 But then I came to the start of Jeffrey’s track and it was time to get serious, the uphill had begun. I had last been up this way probably two decades ago, and then I was a teenager learning how to ride a motorbike.  I remembered that the ride up this way was steep, and I was right.  I soon found myself pushing my bike, though this turned out to be fortuitous as just as I stepped off the bike (at the last house before the road becomes a track) a dog raced out and tried to have a go at me.  At a slow speed clipped into the bike I would have been helpless.

However, the next kilometre or two was just a slow, but pleasant, push upwards ever upwards.  Fortunately this was what I was expecting, so it wasn’t really a problem. 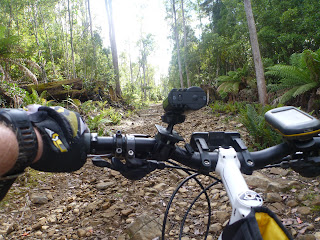 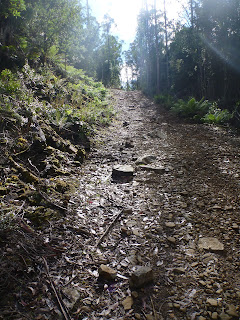 Eventusally I came to a small flat section, before another push, and this process repeated itself many times over, though each time the climbs seemed a little shorter and the sections I could ride got longer and longer.  Then before I knew it I was riding along the plateau and heading past the turn off to the White Timber Trail.  I was back in known territory and well ahead of my expected schedule.

I was quickly over the top of Jerrfreys Track with a fun, but short ride down to the turn off onto the East West Trail.  The wildflowers were all in fresh, young blooms, and a wonderful dew had settled on the leaves fallen on the track, and darn it, it was just so good to be there … hot, sweaty and alive, and with the final big hill in front of me. 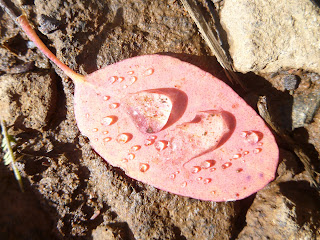 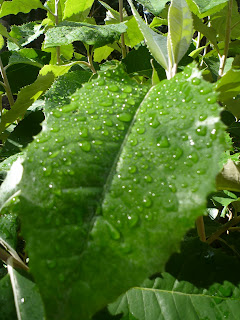 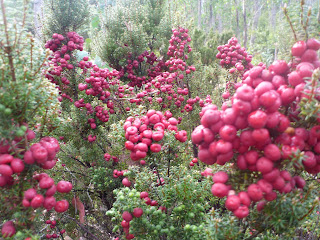 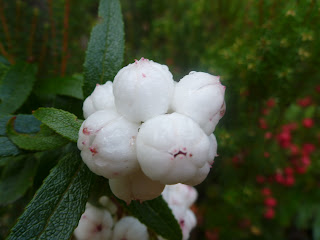 Fortunately although the start of the East West Trail is steep, it is only a relatively short push and before I knew it I was back on a mostly ridable trail, albeit with a few short pitches and one very long puddle to negotiate. 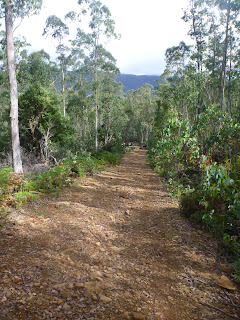 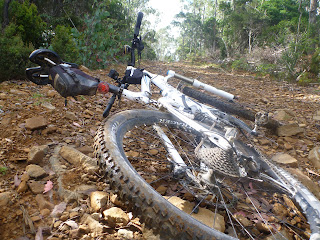 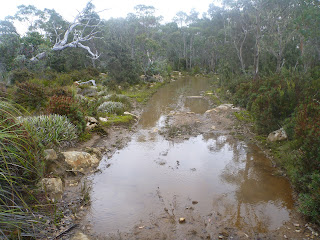 In fact, I was ankle deep in the one and only very long puddle, happily pedalling my way along thinking “Please, God don’t let me fall in” when I looked up and saw the only other person I met all day.  Another cyclist pushing his bike in from the opposite direction.  Like me, he was out for a day ride, but he’d come in from Collinsvale and was planning on turning around soon.

I think I was about 18kms into the ride when I reached the base of Collins Bonnet.  From here I planned to turn onto the Mountain Creek Trail and reap the reward for all my uphill efforts – kilometres of fast, technical descent.

What I saw instead was a track that indicated it was closed to cyclists … NOOOOOOO!!!!!!

I was shattered.  I had both walked and ridden down this track before, and knew it was hard, but didn’t think it rated being closed due to being too dangerous.  I was torn over what to do – should I turn back or stick to the original plan?

In the end I decided that I would walk my bike down the top section that was within the park (the signage said the track was open to walkers) and then figured I could jump on my bike when I exited the park and ride the bottom section.

I should have stuck to the plan, and yes I can now understand why the track is closed to cyclists.  You know when you’re slipping over and falling down just walking down the trail that it’s pretty dangerous, and in the end I decided it would be safer to ride than walk,  and I ended up riding probably 60-70% of the top section and it was rather awesome fun 95% of the time and terrifying the other 5%.  I couldn’t recommend this ride to anyone, and if you ignore my advice and the signs, then be ruddy careful … there were some very steep, slippery, nasty little sections, and I went over the handlebars more than once … 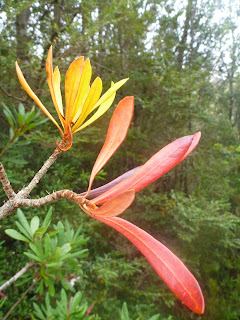 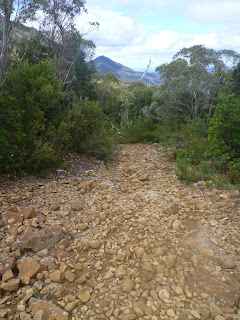 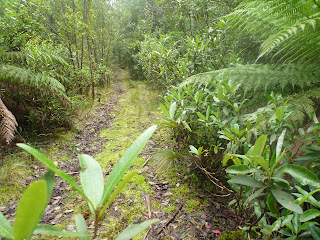 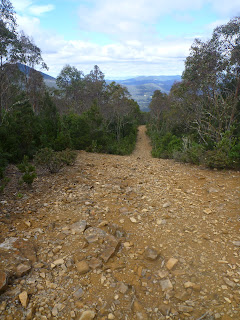 Part way down, I had this very surreal, end of the world type moment, when I stopped on the track only to see a few crows noisily moving up the track towards me.  They were hopping from one tree to the next, and were followed by more and more and more … within a minute I had about fifty crows sitting in the tree tops surrounding me looking down … awaiting my doom?  I pushed on.

As I dropped lower, the rocky scree / watercourse track turned more intoenclosed forested tracks, with lots of overgrown trees fallen on the track, however after crossing a stream and then another bridge, I finally got to the ‘clean’ section and had an awesome downhill run back out to the road. 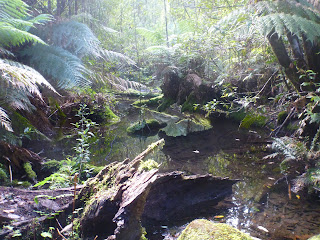 I noticed that the “No Cycling” sign had been scratched off the bottom of the sign at the end of the track, but didn’t hang around long as I followed my nose the last 8 or so kilometres back to the Grove Store.  The road was predominatly downhill and it was fast (3min/kms) and fun all the way back. 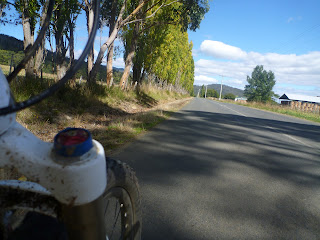 All up the ride was about 35kms, inclduing over 1000 metres vertical ascent, and was absolute great fun. I would love to put it up on tassietrails.org, but I can’t put up a track that has a section closed to cyclists.  Sigh.  I guess I’ll just have to keep the memories.