I’ve been a bit messed up in my head this week, and to be honest I’ve been struggling to figure out why.  I’ve found myself easily annoyed by the people around me and only time and space (alone) have allowed me to crawl back out of my cave towards being human again. 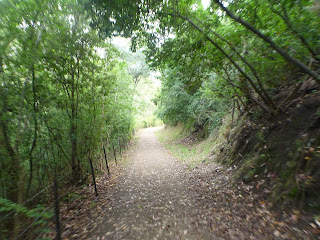 Kim and I went for what is a beautiful peri-urban ride up to Silver Falls after work on Tuesday night.  We followed the South Hobart Rivulet track out of town, jumping over onto the trails up to and then past the Waterworks Reserve and ultimately onto the pipeline track to the Falls. 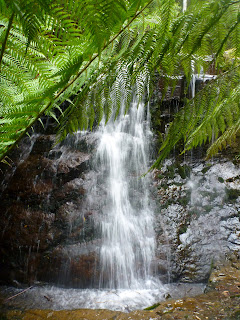 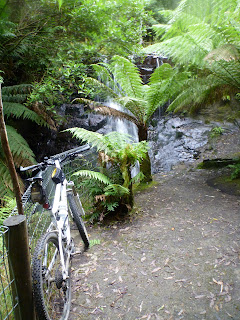 After a brief stop, we then rewarded ourselves with a fast descent back down into Hobart by linking the Resorvoir Trail, Bracken Lane, O’Grady’s Falls Trail and finally  the Rivulet Track into town (see ride route here).

I confess that I barely enjoyed a moment of it.

I went out for a club paddle on Wednesday night, and we went up under the bridge to Cornerlian Bay for a change due to the westerly winds (see route here).

I chose to hug the coast most of the way up, and doing your own thing is accepted on Wednesday night paddles, but at the end of the outward leg rather than rafting up and joining the group for a chat and relax, I instead found myself needing distance from those around me, and ended up paddling off by myself around the point.  This is not so accepted. 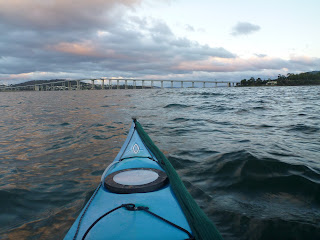 The paddle back suited my mood – a dark but beautiful sunset over a choppy, moving seascape.  I paralled the main group back down from Cornelian Bay to the Bridge, just sitting a few hundred metres further offshore, but once I got to the bridge, I had a need to saddle up against the race monster and see how much pain I could endure.  I put a hard stroke into the water the moment I went under the bridge, and then just followed this with another and another and another.  I didn’t stop hurting myself until I got back to Marieville Esplanade.

It was delicious and I was aching and spent when I got back to the car, but unfortunately this workout just took me back to my car, not to any answers.  I quickly packed up and was driving off as the slower paddlers were still coming off the water.

Last night (Thursday), I went down to paddle training, but after getting there early, I sat in my car and realised I really didn’t want to be there, so instead went home, ate some fish fingers (don’t ask) then went to bed with a very sore neck and read the recently released book “Fearless” abut Freya Hoffmeister’s circumnaviagation of Australia.

I think this book may have finally been what I needed to turn my headspace around.  I was gripped by the story, and after getting a cup of hot milo and raiding my emergency chocolate store, I curled up in bed and was swept along by the story as she paddled up the East Coast and then across the Gulf despite all the nay sayers and in what to me was a foolish, but amazing feat of human endurance.

I can’t wait to get back to reading it tonight … after the TSCC AGM of course (sigh).

However, already inspired by what I’ve read, I met Steph for a coffee this morning and after checking the wind and swell predictions for tomorrow, We chose to ignore the slight sprinkling of snow that fell on Mt Wellington overnight and locked in a paddle from South Arm around to Cremorne … and we’ve timed it for the middle of the day when there will be maximum swell and wind – predicted 20-30 knot winds and 2-3 metres swell and sea.

Time to go out and play with my dark side …  sometimes that’s what I need to remember how beautiful this place is.