The Kellevie 6 Hour was to be my first Enduro, and I didn’t really know what to expect.

I confess to being a tad nervous before the event, especially about how much faster everyone else would be and how technical the circuit would be. I had many images in my head of being overtaken … mainly whilst I was pushing my bike.

But I needn’t have worried …. I enjoyed watching the mass start (ie. I enjoyed not being in it) and I really enjoyed the actual course which was a good mix of technical and fast riding (see video below).  I was also pleasantly surprised how much I enjoyed the team approach with Kim (especially the rest and recuperate between laps bit).

I enjoyed catching up with a few people I hadn’t seen for a while, and of course I enjoyed riding track I hadn’t ridden before, especially being given a second, third and fourth chance to ride it again and try and improve my lines and speed (for the record, I got slower every lap).

What was it like?  both brilliant and painful at the same time.  I had a huge smile on my face at the end, but I hurt myself inside and paid a bit for my efforts that night.  Anyway, below is my (likely) last attempt at bicycle videoing … I’ve come to realise that a bike just isn’t a good platform from which to operate a video camera, even if it is a bike specific camera built for the purpose, but I’m almost happy with this effort so I hope you enjoy (NB. This won’t work in the USA due to copyright issues over the soundtrack).

Kim and I each completed four laps, so a total of eight, and I was pretty happy with that.  Kim crashed once and lost her chain twice but I think was pretty happy as well.  I can’t recall anything too serious happening to me on the way around.  I did however spot this up and coming talent on the day and I’m already talking to his manager about getting him into our team next year …

Results wise … well we finished, and came fourth (out of five) teams which started our division, but we were two laps down on the winning team, and that’s a looong way.  Still, we were both smiling … 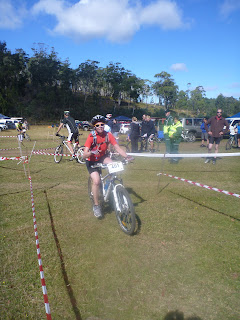 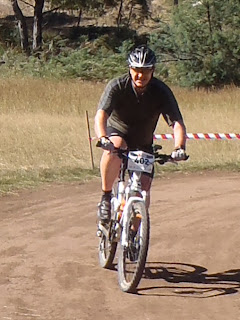