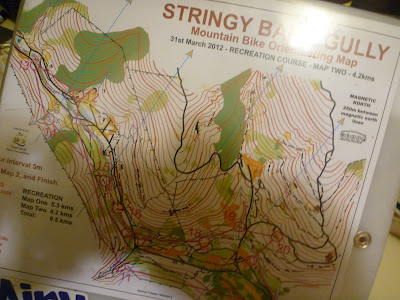 I was probably only 2 or 3 minutes into the course.  I stood straddled across my bike and hadn’t moved for about 30 seconds as I poured over my map.
I took a moment to look out over the lovely view of the valley below before again looking down at my map trying to figure out where the hell I was and how what I saw in front of me could possibly match all those squiggles and lines on the map in front of me.
All the time I was very aware of the watch on my wrist ticking away the seconds and the fact that I was still trying to find my way to the first of 20 controls.
I was lost, completely lost, and I had no idea how to relocate myself.  At that moment I was reminded of all the reasons I hate orienteering … it is such a perfect way to ruin a delightful exploration of an area, and at teh same time it’s such a frustrating way to race.
I looked at my map for what must have been the third or fourth time, sighed deeply and seriously considered just going back to the start and DNFing, but instead I backtracked down to a major track and went in what I thought was generally the correct direction, even though I was absolutely, completely and definitely sure I was on the wrong road.  Turns out I was wrong.
I saw some singletrack heading off to my left then another piece of single track and suddenly – like an incalcitrant jigsaw puzzle where one piece slots into place and then the whole thing seems to just fall together – I realised both where I was on the map, and how the whole map worked.  I was ‘in’ the map. 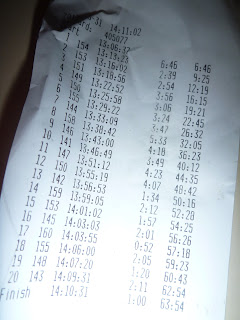 Thanks to an extremely slow time of 6 min 46 seconds to the first control and the hit my confidence took from this huge navigational faux pas, my first lap was still slow, but as more and more of the navigational fog dissolved into certainty, as I got a feel for how the distances on the map converted to distances on the ground, as I understood the map makers interpretation of track size and how he was seeing the tracks and terrain … I just got faster and faster.  Soon I only had to glimpse at the map, absorb the route, identify an attack point and go.
I was running at 100% speed and effort when I crossed the finish line and all memory of the stilted start had vanished from my mind.  I was sweaty and grinning from ear to ear: and that’s why I love orienteering.  It challenges you, it rewards both skill and fitness, but I think more than most sports, it also rewards perseverance and not giving up.  It’s a sport where you don’t often see your competitors until the end, and hence you don’t know whether they too have mucked up somewhere.  Sometimes it’s what you think are your worst days when out on the course that end up being your best days when you get your results.  You often forget when out racing that everyone else is having to deal with the same course that you are, and are out there making mistakes of their own.
Yea, I hate and I love orienteering, but I wouldn’t have it any other way.