We could have headed up to St Helens this weekend for three days of orienteering and beach life – but we agreed it was a bit too far.  We could have popped over to Bruny Island where we had been offered unfetted use of a friend’s house for free – but we weren’t really sure what we would do once we got there other than look at each other and say “isn’t this cheap” … so instead we went to Bicheno – it wasn’t too far, and it still had everything we wanted to do (well, except orienteering which to be honest was pretty low on the list anyway). 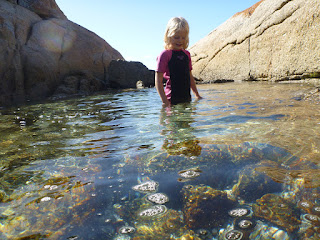 Did I mention that this was to be another weekend with the Monsters?

I realised once I arrived and looked out over Redbill beach that I had a secret motive in recommending this place – I wanted to go back out and face my demons on Diamond Island.  I’m not playing innocent here – I admit that the potential showdown on the Island had been playing at the back of the mind as I had argued for all the other reasons we should go to Bicheno: playing on the beach, kayaking, trying out the new BMX track, the pancake barn at St Mary’s and swimming in Apsley Gorge, but as soon as I saw the Island there in front of me I knew I had to get back out there. 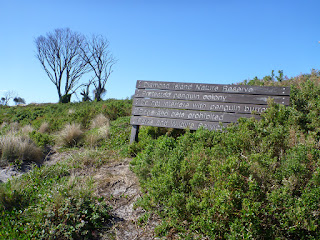 My history with Diamond Island goes back … way back … back to Year 11 at school when my girlfirend and I got invited to a camp up to Douglas River by another friend.  We accepted the invitation not realising at the time that this was a ‘christian’ camp which was not what I had pictured when I imagined a camping trup away with my girlfriend …
Fortunately for me, we were to get a lift up there with some guy who I’d never met called Christopher Phipps.  What I didn’t know was he was to become one of my best friends and mentors – well until he took his own life at the age of 27.  But back then I didn’t know all that was to happen in the years to come, all I knew was that when we left Huonville, we were in a really cool car with a big stereo system and he drove really fast – way over the speed limit – and I remember thundering into Bicheno with the B52’s on the tape deck booming out their new hit “The Love Shack” thinking this was already the best weekend ever.
It was a great trip: we were up there for several days and did all the things you usually do and which I don’t feel the need to detail, except the event which comes to the crux of this post – on one day a few of us – Chris, Helen, myself and I think Lynette decided to break off from the rest of the group and head out to Diamond Island.
It was a great lark as we headed out over the flooded isthmus and then onto the island itself.  We didn’t have any goal or objective, we were just having fun as we rock hopped and clambered our way around the Island doing stupid things like you do when you’re young and invincible.
That’s when we got to this huge split rock.  We all climbed this rock – it was on the north east corner of the island and we were just sitting around on top enjoying the view when Chris stood up and casually jumped across to the other split section.  Helen followed, and then with a bit of help, so did Lynette.  I couldn’t though.  I just froze.  I so wanted to follow but I was just engulfed by all the doubts and consequences of not making that jump succesfully and eventually clambered back down the way I got up, and for all intents and purposes we just continued on our way having fun.
Except, I wasn’t.  I had come face to face with a fear that I couldn’t overcome, and I hated it, I felt weak, pathetic .. I felt less of myself.  It ate at me for days and then years, not constantly, but everytime I would head up the East Coast I would pass Diamond Island and it would remind me of my weakness that day.  Diamond Island became a symbol in my life of all the fears that hold me back from doing what I want to do. I hated it – we should be bold in life, not timid. 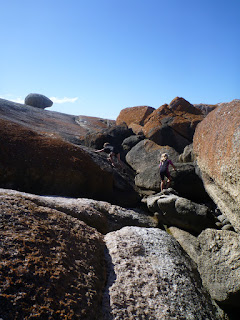 I realised many years ago that I needed to face and overcome this fear, and so I went back, I crossed the isthmus, I clambered around the island and I climbed the rock … I was one step away from putting this fear to rest forever … but I never took that step.  Instead, like the first time, my courage was eaten away by the fear of the consequences of failure.  I climbed back down off the rock, I walked back around the island, across the isthmus and I went home.  I was defeated.
I have considered going back there on many occasions since, but I always feared facing that fear a third time and failing again.  That’s why as we rock hopped and explored our way around the Island this time I was filled with both excitement and dread.
Then a strange thing happened … we got about three quarters around the Island and I realised we had gone past where the rock was … and I hadn’t even seen it, and I didn’t feel like going back and looking for it … not when the kids seemed to be having so much fun swimming in rock holes, taking their ‘buzzies‘ for walks (despite my protests about spreading noxious weeds) and clambering through narrow chasms between rocks (or was that just me?). 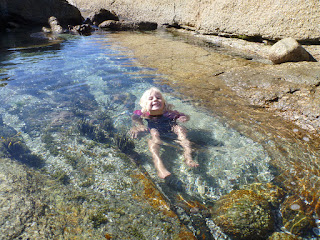 So we left the Island, and headed back along the beach, this time I never faced my rock, but still strangely I think I may have conquered it.  It somehow lost its hold on me when I realised that the point of going to Diamond Island was having fun and that this was more important than risking more than I’m willing to lose to basically get from one side of the rock to the other .. I mean, seriously, should it really have taken me two decades to realise that? 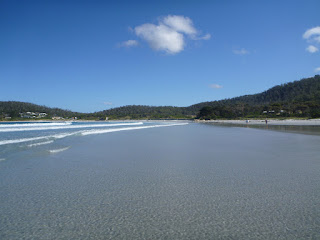