Training:  I’m not much good at training, especially any training that requires repetition, and from what I’ve seen that appears to be most of it.  So on that basis I’ve been rather happy with my efforts over the last couple of weeks.  I got out on the water for three nights the week before last and four nights this week, including a longer paddle down to Kingston Beach on Monday night, a fun paddle with Cath down to Taroona on Tuesday night, my normal Wednesday night paddle with the club and then a sprint session with Ben during his free Next Level Kayaking session.

I would have gone out on Friday as well, but I’d signed up for a pool rolling session to see if I could still get my kayak back upright after a capsize. Turns out I can … well 80% of the time … in a swimming pool, with googles on and when I’m expecting the kayak to roll.  This unfortunatelu translates through to about 0.02% of the time out on the ocean.  Still at least I can do it, and who knows I might get lucky.

That brought me to today.  Today I planned on my first 40km paddle from New Norfolk down to Hobart to see how I’d hold up.

I was on the water before 8am, and paddled up under the New Norfolk bridge before turning downstream to cover the 16kms to Bridgewater Bridge, my first goal for the day.  The water was almost mirror flat all the way down, although a little bit of a headwind kicked up half way along before dying off again, but it was really just a case of putting the paddle in again and again and again.

I passed under the bridge just over two hours after putting on the water, averaging about 8kms/hr including breaks and photo stops.  From there it was into unpaddled water for me, though the navigation markers seemed to indicate that I should stick to the left hand shore.  I did notice an interesting trail running alonside the Brighton side of the shore which looked worthy of investigation some time.

With a running tide and a little bit of wind behind me, it was a pretty quick paddle down past Cadbury’s and then under my third bridge for the day and past the more industrialised shoreline.

From there the last 15kms or so seemed to fly by as I passed a bit more boat traffic, zigged and zagged across the river to try and get my miles up above 40kms, and even ducked into Hobart Port just to make sure.

Overall I managed to average 8.9km/hr for the trip and it was a good paddle with some nice sights along the way and a great run home.
This wasn’t however the end of my day.  Whilst my ski was safely back on its rack in the Derwent Sailing Squadron, my car was still 40kms away back up in New Norfolk.  Luckily I had left my road bike in the sheds for just this problem.  I got changed and onto the bike, but after four and a half hours in the ski there was no blood flowing through the legs at all and it took me nearly15 minutes to get them moving again, plus that nice little tail wind which had helped push me down the river was now firmly in my face.
I set myself a goal of getting back to my car in under two hours, but then revised that down to one hour 45 minutes by the time I hit Granton, then with 10kms to go, I decided that maybe, just maybe, I could make it in 1:40.  I managed to sit at around 35kms an hour but was constantly in and out of the saddle to keep that pace up.  I finally broke going up the final little hill into New Norfolk and crept over the top at a feeble 13km/hr.  I glanced down at my watch and saw I still had two minutes to go … was it possible?  I jumped back out of the saddle and pushed down and through the roundabout, then right into Page Avenue with just 37 seconds to go.  Page Avenue didn’t seem to want to end as I threw everything into the last sprint to my car, through the gravel car park, followed by a controlled skid as I pressed the stop button on my GPS and looked down to see 1 hour, 39 minutes, 59.92 seconds … 0.08 seconds to spare … now that’s what I call timing. 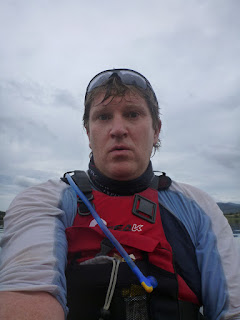 Who knew that was possible?