After pushing up a bit of a steep pinch, I came over a small crest and for the first time could see what looked like the top of the trail, loping over a crest in front of me.  I waited a second for Kim to come up behind me, and as I was about to set off, I heard her say “your back tyre is looking a bit flat”. 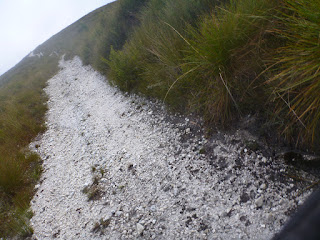 Not thinking much of it, I reached back and gave it a quick pressure test only to be hit by that sinking feeling as my fingers pressed deeply into an overly soft tube.  I had a flat.

Somewhat in denial, I got out my pump and tried to push the tyre back up towards 40 psi, but it was no good, I could see and hear the air rushing out of a hole near the valve.  I had tubeless tyres, and I was stuffed. 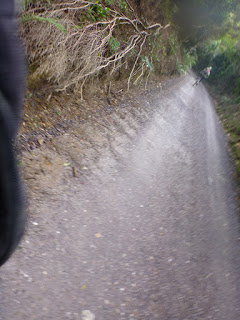 Going back to the beginning, there were several rides I was keen on chasing up over on the West Coast, and when Kim decided to join me for another riding weekend, we decided to head over to do just that.  We headed over to Queenstown on Friday night to maximise our time over there, and were liked young kids when we pulled up at Derwent Bridge just on dark with snow falling down around us.  It was a perfect start to the weekend.

After chatting to a couple who worked at the Renison Mine, we had a pretty darn good, though slightly pricey, dinner at the Derwent Bridge Wilderness Hotel before continuing on over the plateau with snow settling around us on the road, and with the snow flakes themselves creating this hypnotic kaleidoscope of light as each flake charged into the cars headlights.

We were a bit lazy on Saturday morning, starting with a hot breakfast in Queenstown and not really getting out of town until well after 9am.  We headed out on the B28 up past Lake Plimsoll towards Tullah as I’d never been on that road before (it’s a great little road, and there were several interesting trails for future exploration).  Just south of Tullah, we looped around back onto the Murchison highway and headed back to Zeehan via Rosebery, the main purpose of which was to see if I could find my way onto some trails up Mt Black that I saw on Vertigo MTB’s website.  No luck on that front, so instead we went back to Plan A which was to do a 30-50km circuit out from Zeehan over to the Spray Tunnel, along the old tramway and then over a series of old 4WD tracks that skirted along the base of Mt Heemskirk which I’d located on Google Earth.

The ride started out really well, though Kim was pretty under-whelmed by the spray tunnel, and (I think) my pfafing around taking photos. 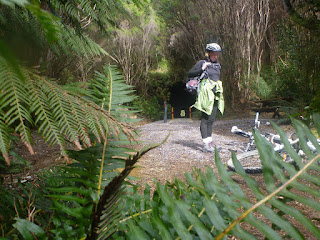 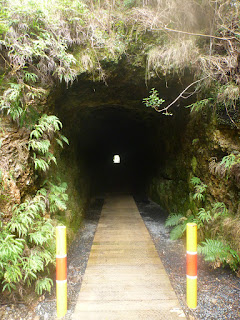 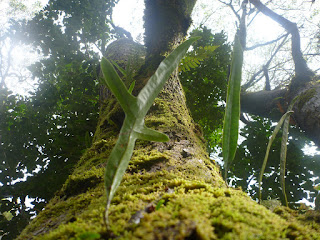 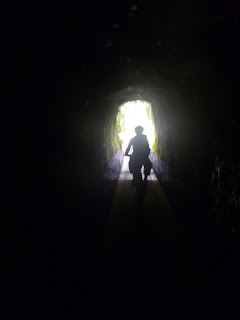 However we next headed onto the old tramway line, and the riding through big deep puddles and slippery mud more than made up for that little disappointment.  I sensed this as Kim came charging past me whilst I timidly skirted around the deeper looking puddles trying to keep my feet and backside dry a little longer .  The old tramway drops out onto the paved C248 highway through a mine site after a few kilometres. 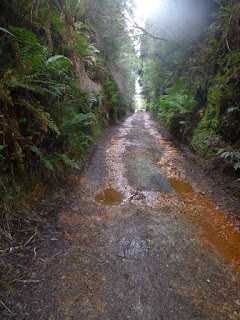 We turn right, and followed the paved road for about a kilometres before turning off onto another gravel track to the left.  This track led us steeply up under some power-lines onto a small hill top with great views, before descending rather menacingly back down again.  I found the ride down a hoot, with plenty of deep ruts, washouts, loose rocks and sharp drops.  Kim found it a little less pleasurable and pushed a few of the trickier sections. 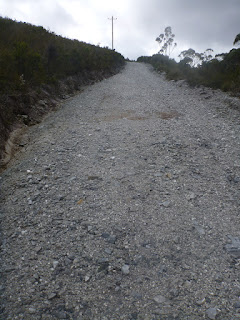 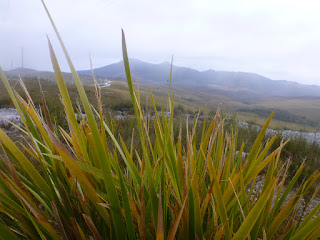 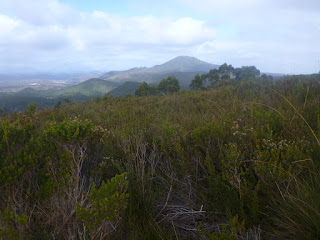 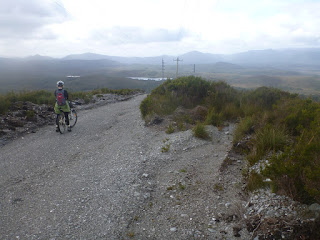 This track dropped us back down onto another paved highway (the C249 that heads towards Corinna) which we followed for another short distance (about 750m) before cutting back out onto what looked like a less than promising track. There’s no denying that this section of the track was another step up again in technical difficulty from what we’d ridden so far, and there was plenty of pushing and a few near spills as we ascended and descended sharply, dropped down into creeks and forded deep, deep puddles. 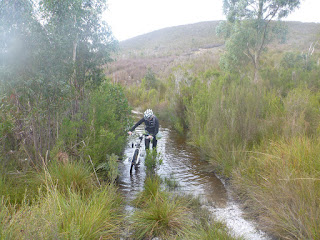 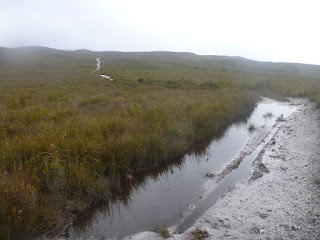 It was just as we were lifting up out of this technical mess and a long downhill looked in sight that I got my flat.
I wish I could tell you that I quickly fixed it, but the truth was that having never changed a tubeless tyre before, I found myself unable to get the valve out to allow me to get a tube in, so after a bite to eat and a bit of a think, I sent (pleaded and pushed) Kim back down the way we came to get the car (once on the highway it was only a 2-3km ride back into Zeehan in a straight line) and proceeded to carry and push my bike back out to the highway to meet her.  Fortunately this all worked out, and I had purchased some “Stan’s No Leaks” stuff the week before.  I’d never used it before, but basically you shake it (and then shake it some more) then pour the recommended amount into the tyre.  Once that was done we just pumped up the tyre with a foot-pump to get a seal on the tube and just like that it was fixed.  I am now a big fan of Stan’s.
It didn’t take much convincing to get Kim to join me in a drive out to the other end of the trail to ride the section we’d missed (in fact she was in the passenger’s seat so fast we almost drove off with the GPS still sitting on the car roof), and so we spent the last couple of hours of the afternoon riding an out and back course over some super-superb gravel trails back to the ‘tube puncture spot’ (located precisely by my GPS and more importantly by Kim’s lunch – half of which was still sitting on the trail). 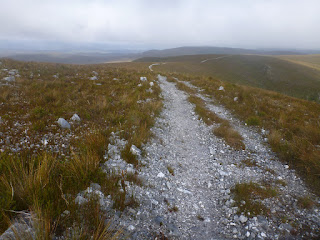 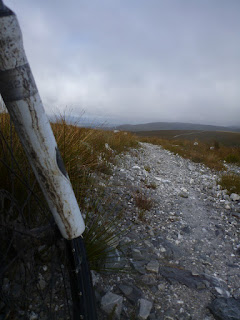 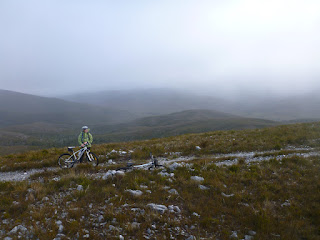 The weather just started to close in on us on the way back, but fortunately because we’d done the car shuffle, we avoided the 9km ride back into town along the highway.  This worked out well as it was getting on past 4pm anyway and we were both thinking of hot showers and meals.

Sunday we planned to do a ride out along Ocean Beach, so we headed down to Strahan fairly early, fueled up on Banjo’s eggs and bacon then drove down to the Beach.

Much to her credit Kim ran straight out into the surf  (her first time on the west coast) whilst I more sedately shivered in the cold southerly breeze and snapped off some pictures whilst deciding whether to do this ride or not. 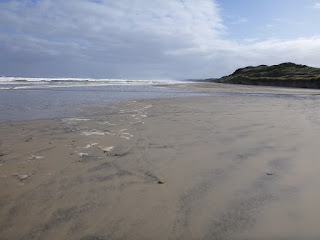 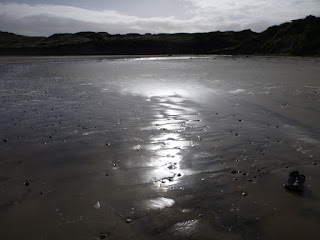 In the end, the combination of cold winds, a poor nights sleep due to an all night party next door to our hotel, Kim’s cold and needing to be back in Hobart by 6pm led us to turn tail and slowly wend our way home, with a few stops for coffee (well at least that’s what they called it) in Queenstown, a bit of a wander out to Nelson Falls, lunch at Lake St Claire ($36 for a small bowl of chips, a chicken burger and two milk shakes!!!) and finally, finally I got to go and check out Laughing Jack Lagoon, even if it was just a brief visit. 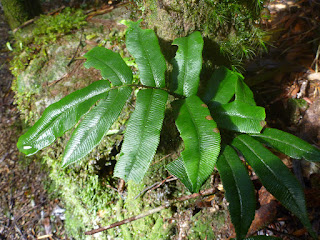 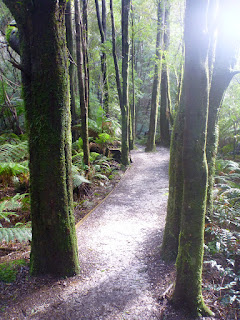 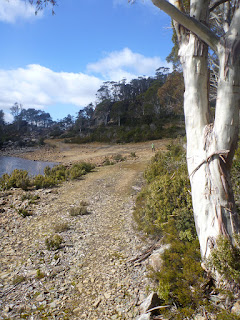 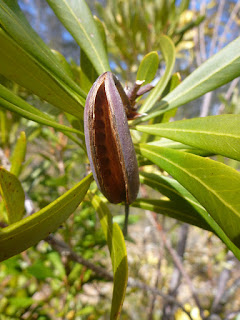 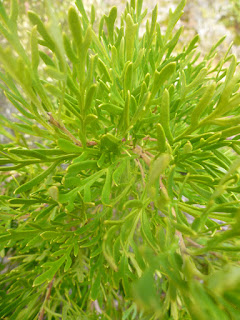 All up, another pretty darn good weekend and another trip to add to www.tassietrails.org … just not tonight.