I entered my first MTB Enduro today, and to be honest I really had absolutely no idea what I was getting myself into.  By luck (not good planning) the Enduro was only an hour long, and for that piece of luck the race result was only humiliating, not soul destroying. 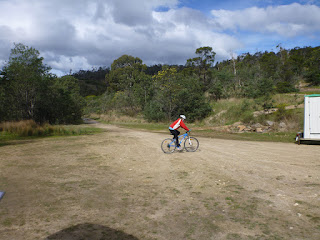 I came last out of the open men and completed six laps, which means the guy that won lapped me four times (he did 10 laps), but strangely I am beyond thrilled with the result, because I learnt more in that one hour of racing than I’ve probably learnt in the last month of riding by myself.

You see, we got there an hour or so before the race to ride the course, and it was a terrifying experience: the ascents, the descents, heck even some of the flat sections were way beyond my technical level of comfort.  I was screwed and, unfortunately, I’d also paid my $30 entry fee, and being the miser that I am I was determined to get my monies worth.

I did have the good sense to start the race at the back of the pack, and whilst I won’t bother you with the full details of the race what blew me away was what I learned.  You see there was so much of that course which, if I was by myself, I would have walked, or at best crept around, but in a race, when 20 or 30 other riders have already ridden over a rock bridge, or down an almost vertical drop, over sharp roots and up muddy slopes, well I thought maybe, just maybe, I could too.  And I did.

Sure it wouldn’t have been beautiful to watch (it was ugly), and yes there were several uphill sections that I had to jump off and run up as my lungs gave out, but I pointed my front wheel up and down slopes that I knew I couldn’t cycle, and yet somehow I did, not once, not twice, but six times over six laps.  I tried different obstacles at different speeds, and in different ways and I learnt so much more about what I can do, what I can really do, in a world that was previously not only outside my comfort zone, but was simply outside my world.

What a brilliant hour. A brilliant, brilliant hour.  I was physically empty at the end of the race: my back ached, my legs burnt, but my mind was spiralling upwards with excitement of the potential of where I might go.

To top the day off, we then headed around to Belbin’s Road and competed in a 30 minute sprint MTBNav event at Stringy Bark Gully. 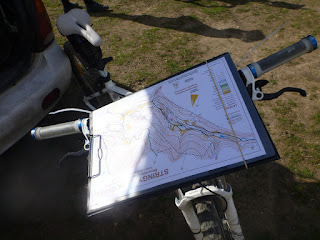 After a great start, picking up three controls quickly, I was heading into a fourth control when I came around a corner only to find a guy parked on the track in front of me, I couldn’t unclip quickly enough, and had one of those low speed, embarrasing crashes.  Wanting to put that behind me I jumped on and took off taking my eyes off my position on the map and getting disoriented.  I missed the control, and the next one, and ended up spending five minutes cycling way too far trying to re-orient myself.  Five minutes is a lot of time to lose in a 30 minute race.

It was only at the end of the race that I realised that that guy was actually parked on the track because he was punching the control I was looking for.  What a stupid mistake! 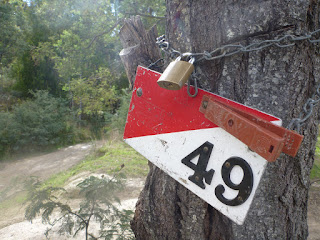 Anyway, that just threw me, and I ended up getting confused by the detail in the section of the map I was in and looping around and around at a technical junction losing time and getting nowhere.

Eventually I gave up trying to sort that junction out, and with about 10 minutes to go headed back to the start/finish, picking up three controls on the way and returning after 26 minutes with a score of 60 points.  That placed me pretty much midfield, with the winner scoring 100 points, and most people scoring 90 or 60 points. 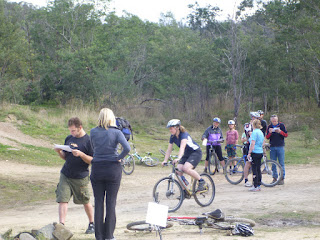 So how’s that for a cool weekend: A three hour ride to the top of Grey Mountain, my first Enduro and a MTBNav event … and I never went more than 20 minutes drive from home.  Sweet.﻿
﻿