I have very few things that I can genuinely say are ‘strengths’ (despite what you might read in this blog), but reading maps and navigating is an area I’ll claim as a strength.

Which is why, having been provided with five pages of detailed trail notes and photos of a proposed mountain bike route around Zeehan, and despite the notes having street names and me having access to all sorts of mapping products, I was somewhat flummoxed by the fact that I could not for the life of me figure out where this trail was supposed to be.

As I was to discover, part of the problem was that Zeehan has shrunk.

True story, check it out on a Google Maps and you’ll find all these overlain streets on areas that are now just button grass plains and forests.  This meant I was looking at route notes which said “just follow the trail off such and such street” … and according to the maps I was using that ‘trail’ was still in the middle of town.

But, putting that aside, once I got to Zeehan, I was told to just turn right out of the Caravan Park, ride out to the reservoir and then follow the road up the hill and back to Zeehan … and that didn’t sound too difficult so off I rode …

It’s a really nice couple of kilometres out to the reservoir on a flat gravel road (follows an old tram line), and as I’d set off in the early morning, I got to enjoy mist covered hills and dewy close ups … 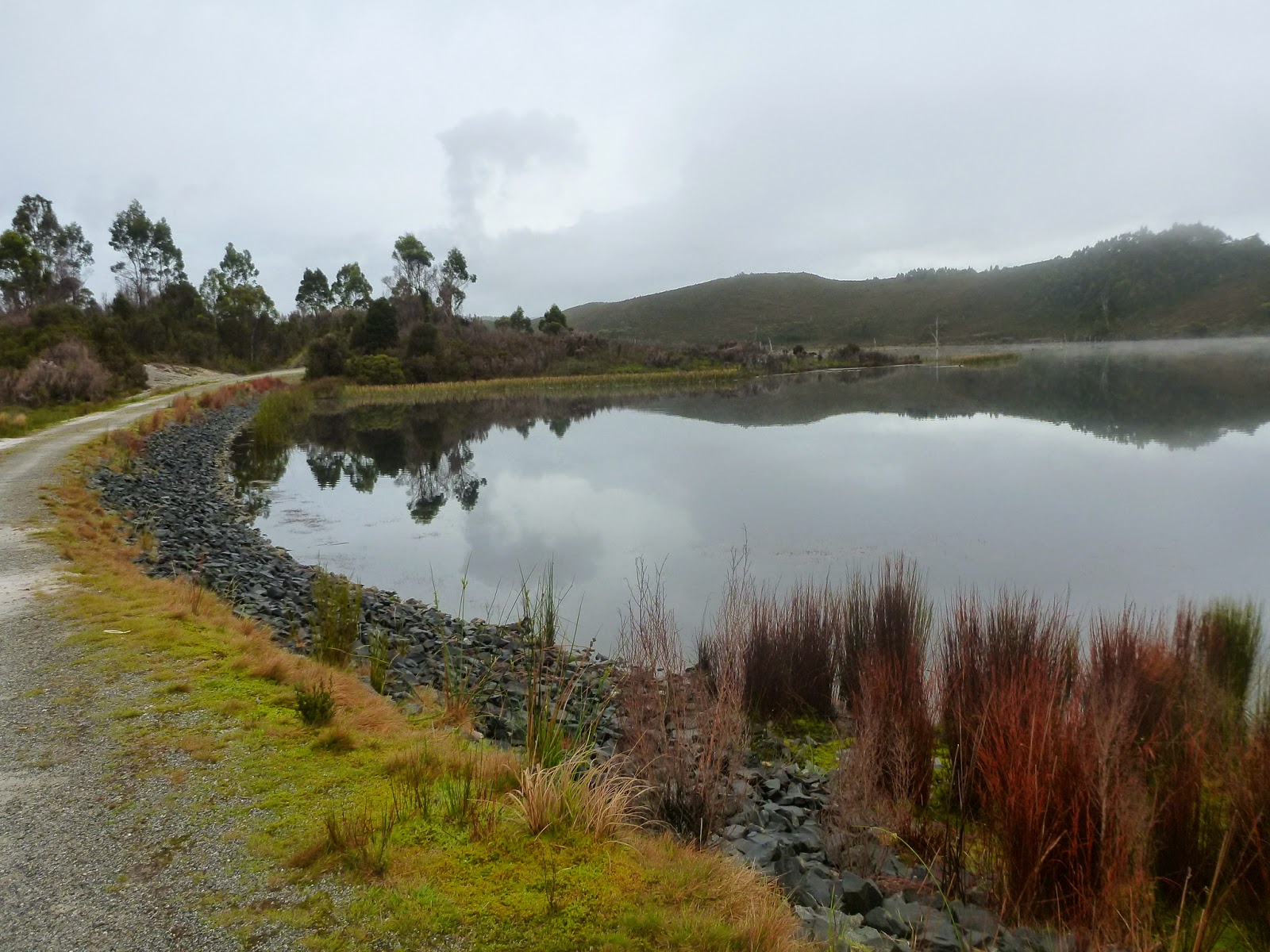 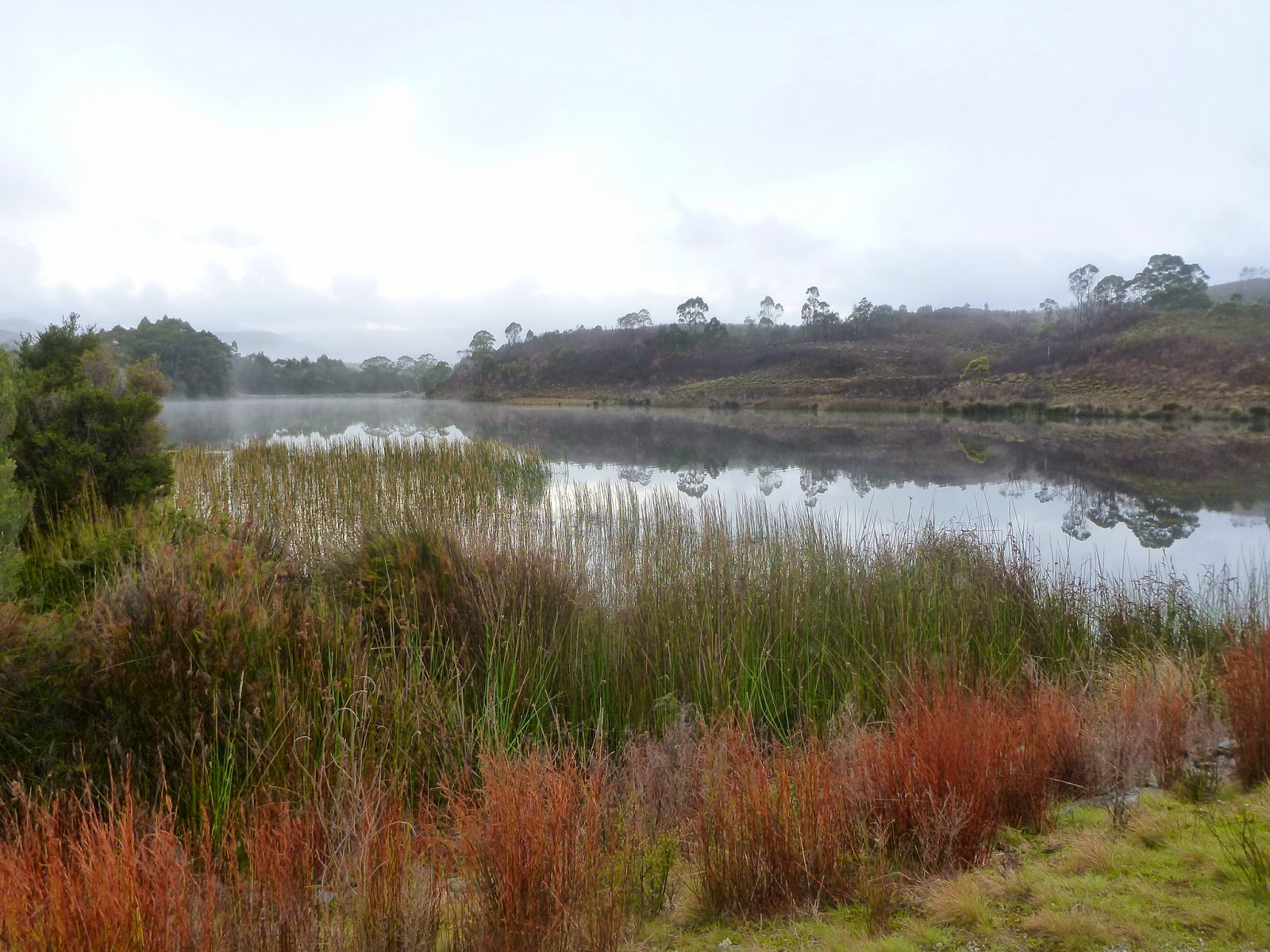 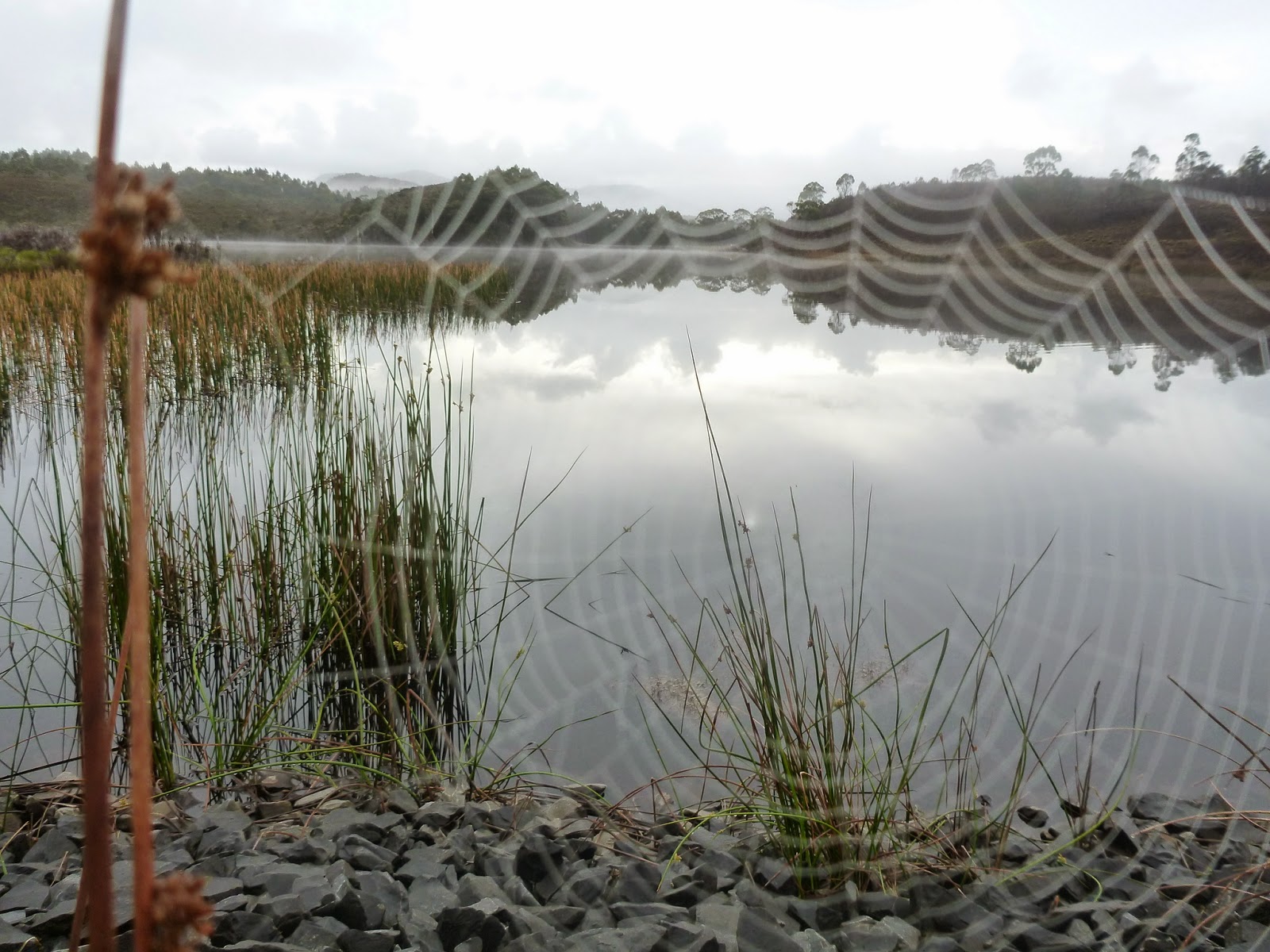 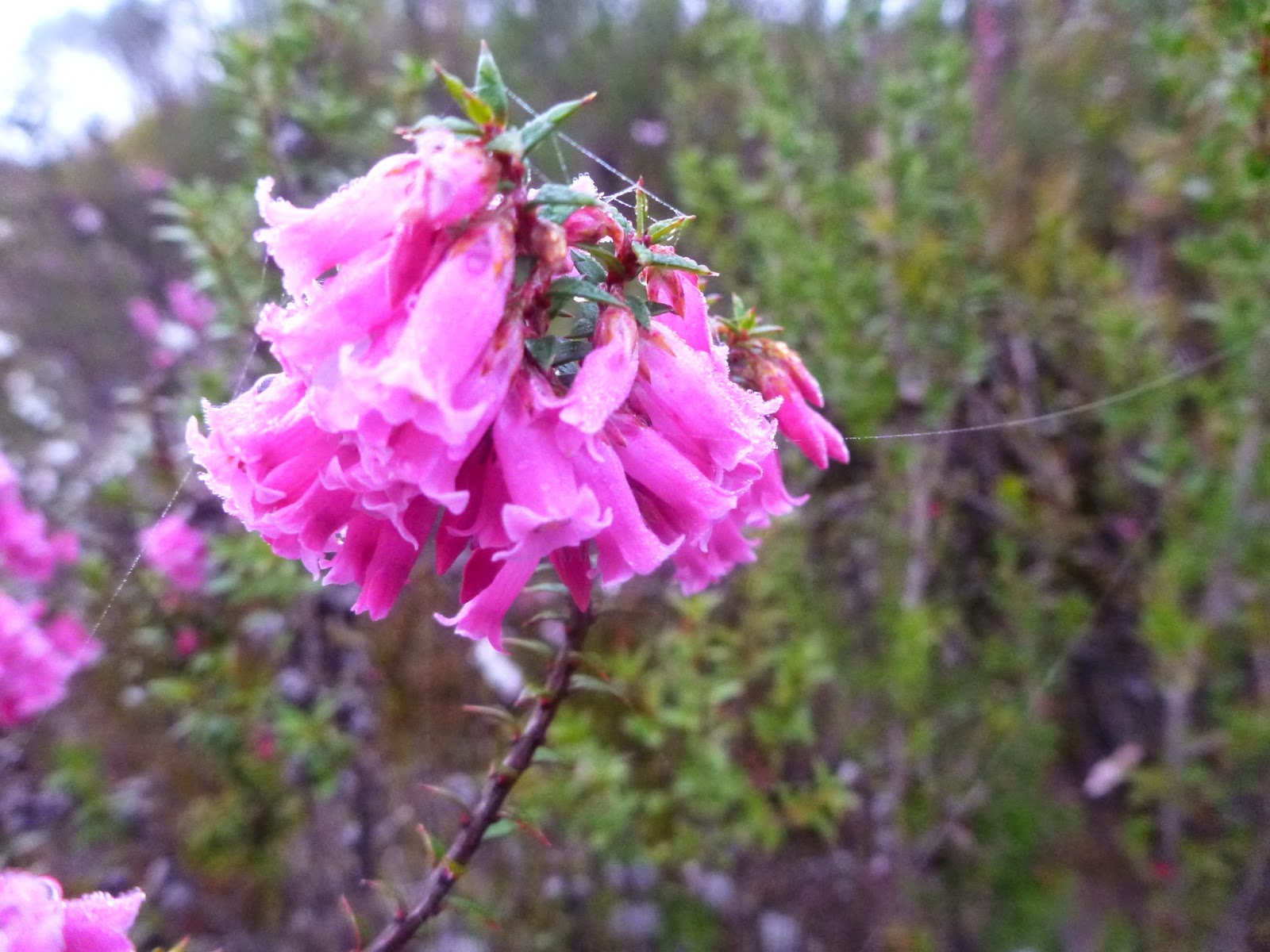 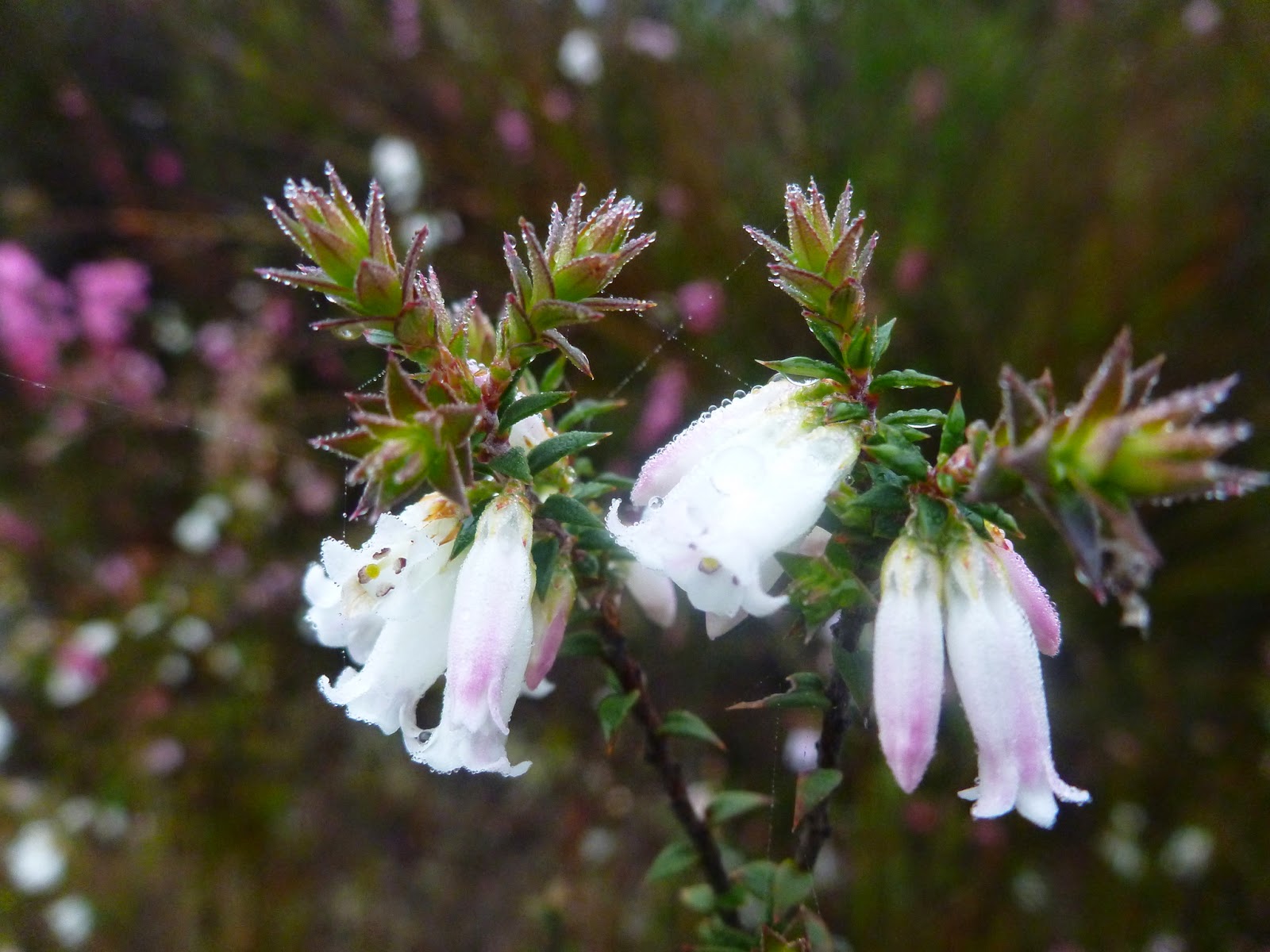 After that it’s a short, but steep, little climb to some nice views over the reservoir, then you take a right turn at a junction and the fun begins. 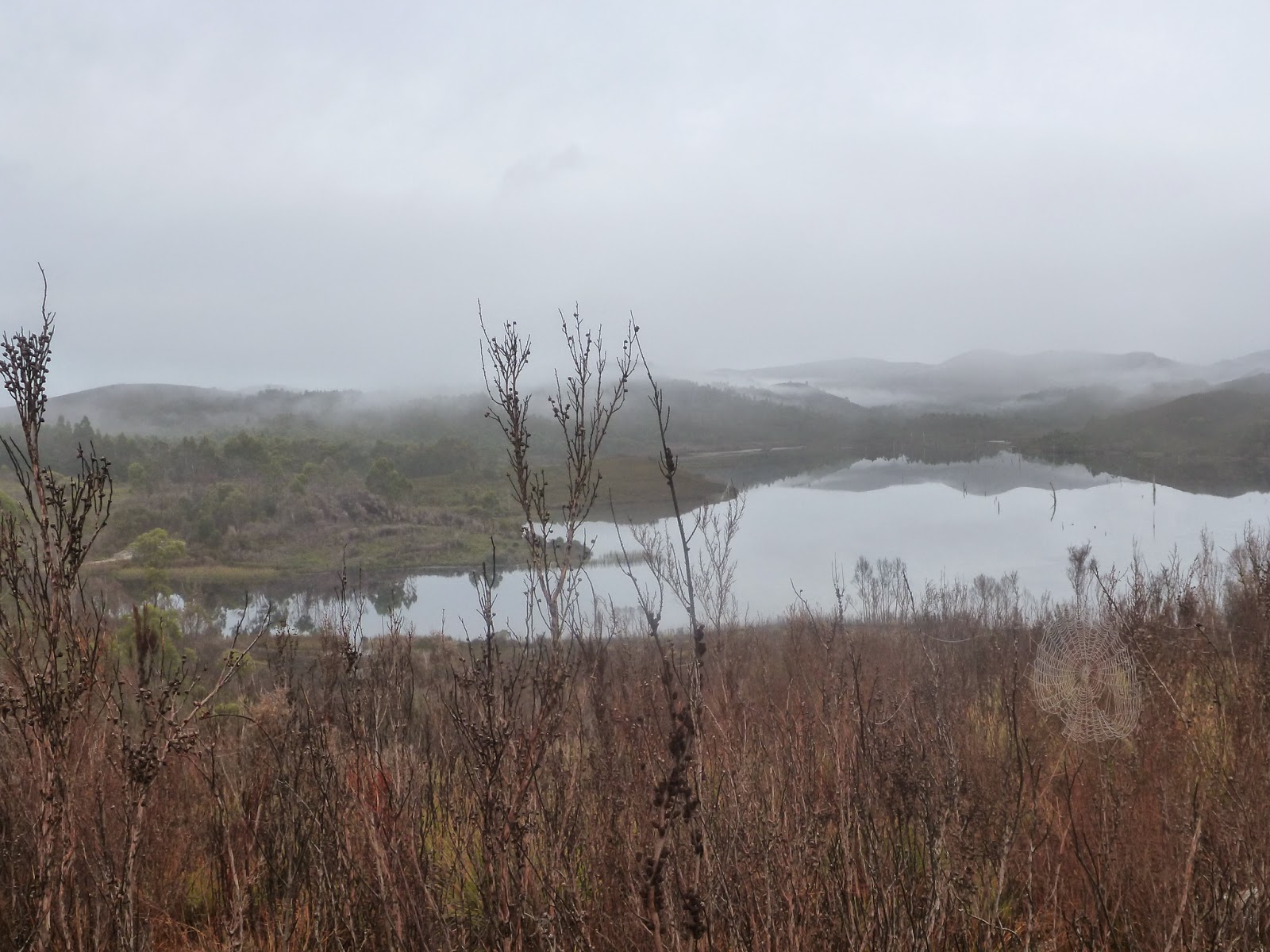 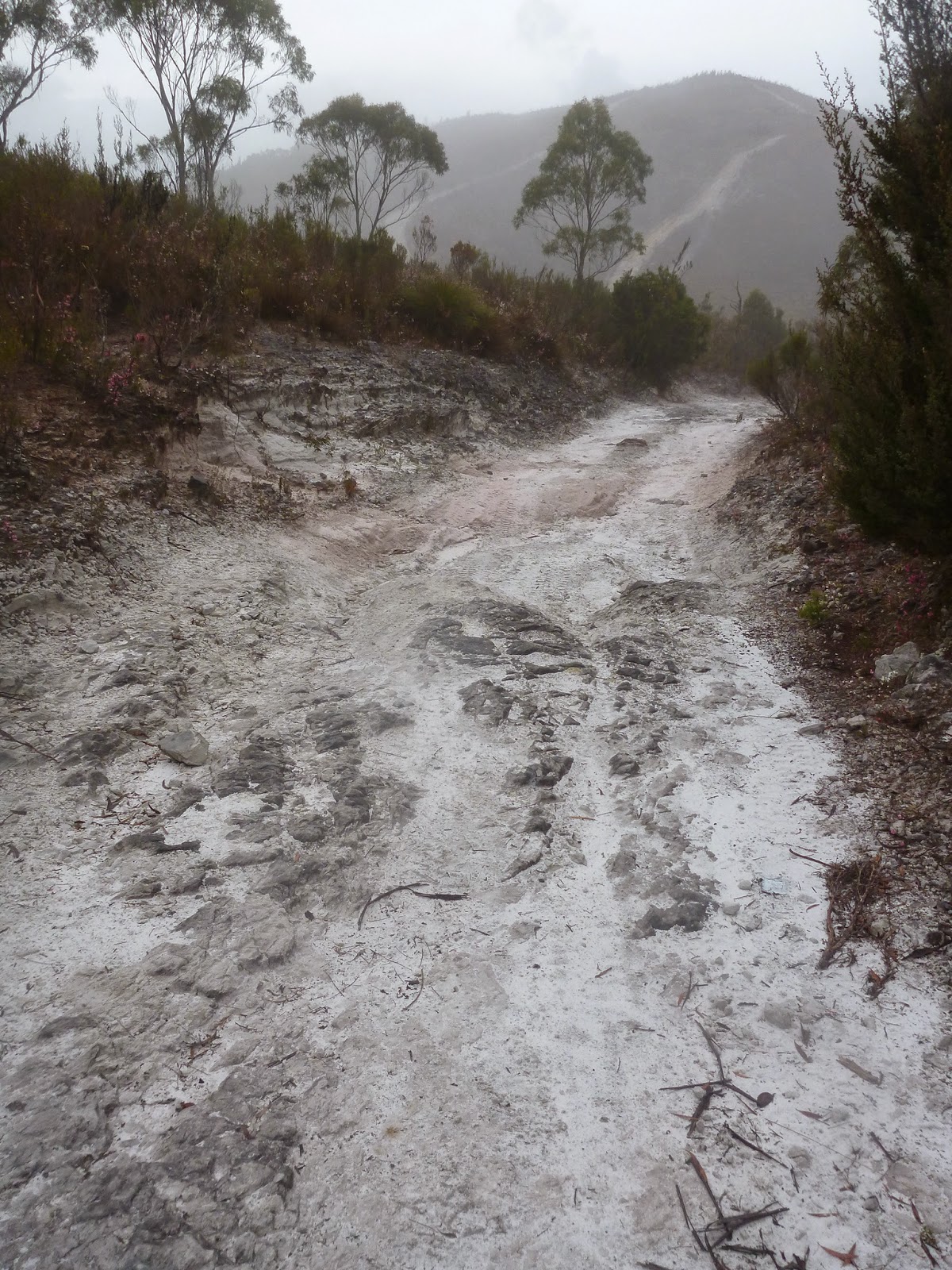 The route back to Zeehan follows a ridge line, and there’s a couple of short killer ascents and descents, but I was surprised by just how much fun I had on the rest of the ride, especially as I got back towards Zeehan and had a play under the big metal structure (yea, that’s the technical and historical term …) 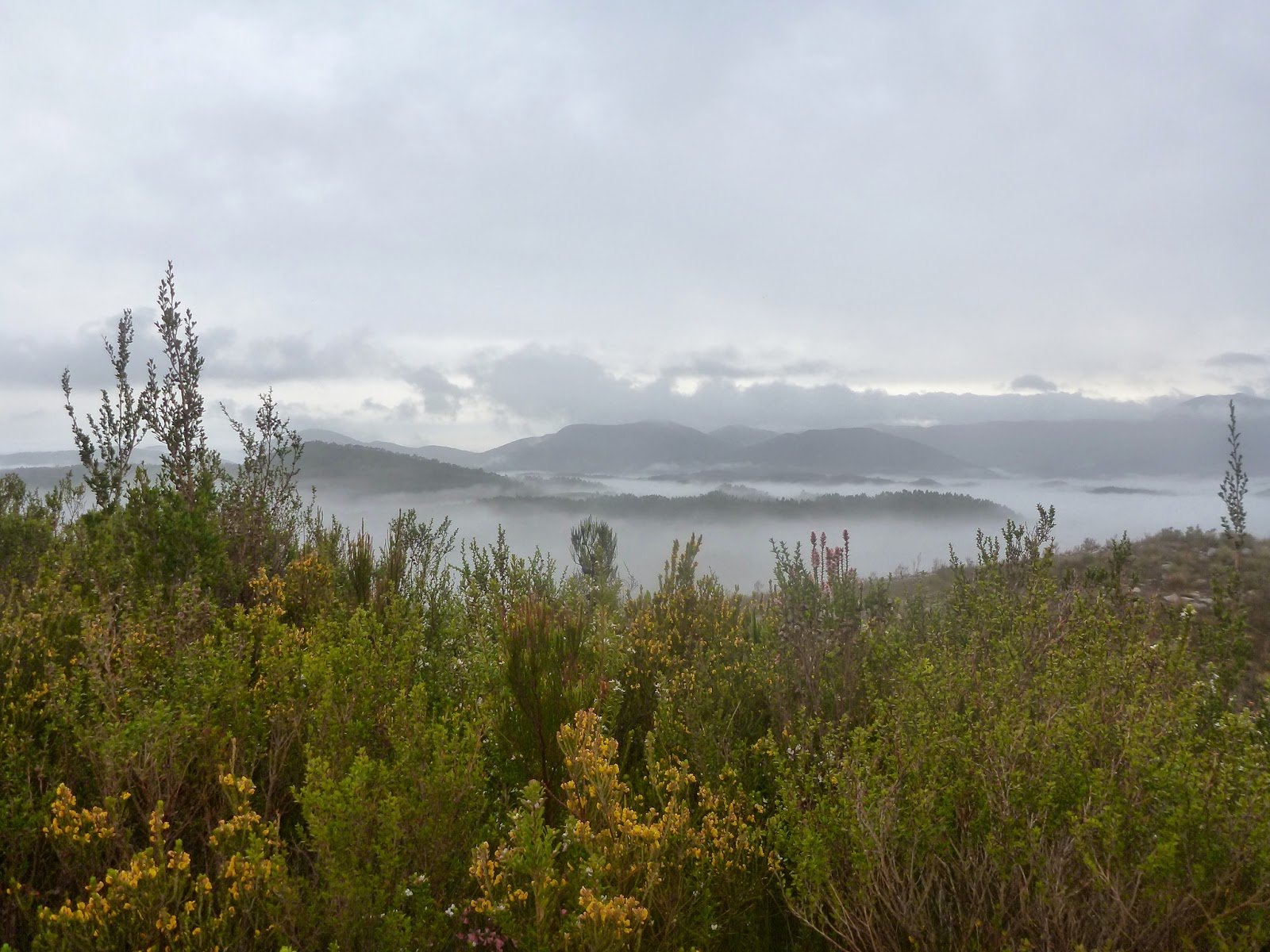 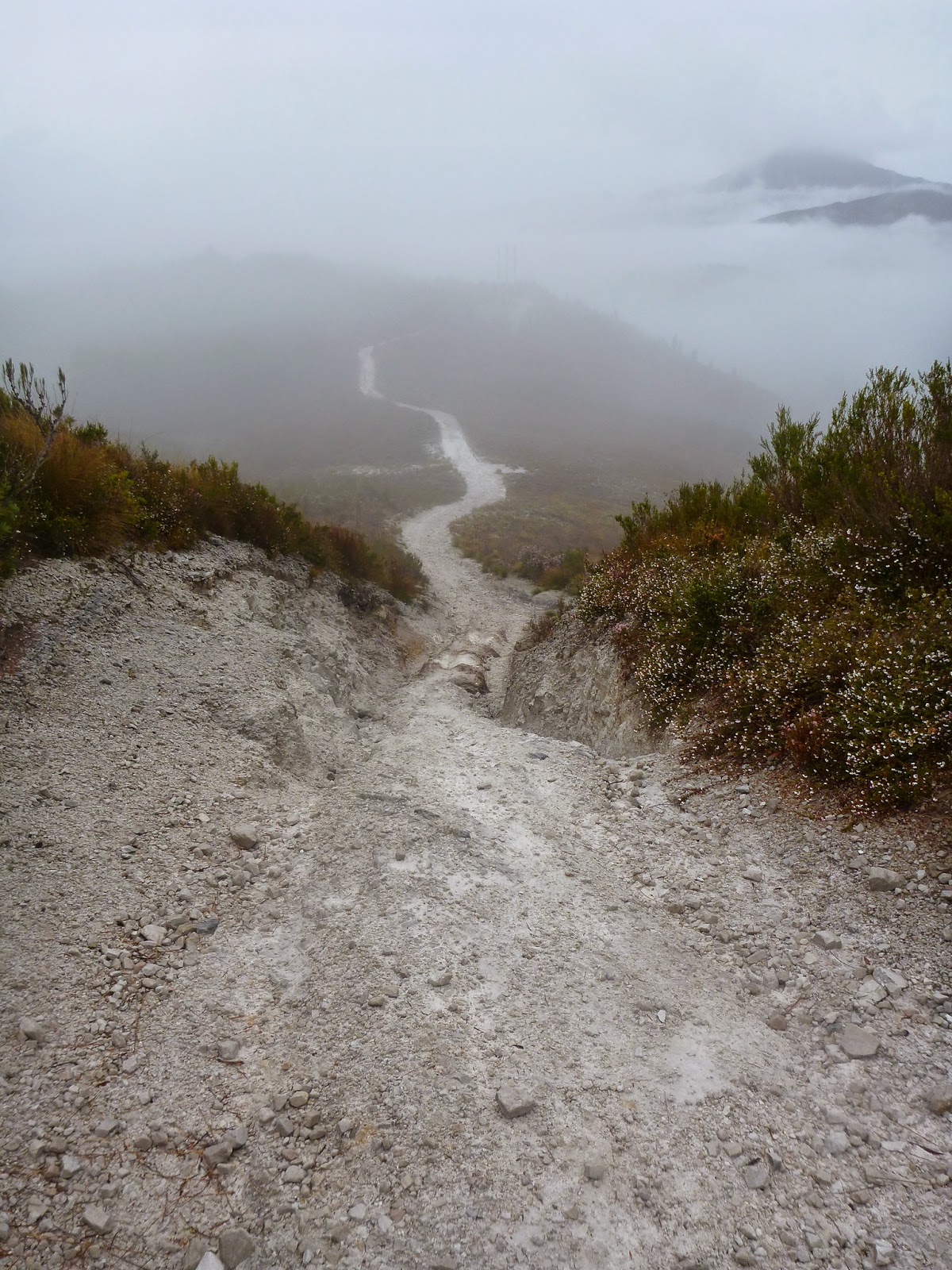 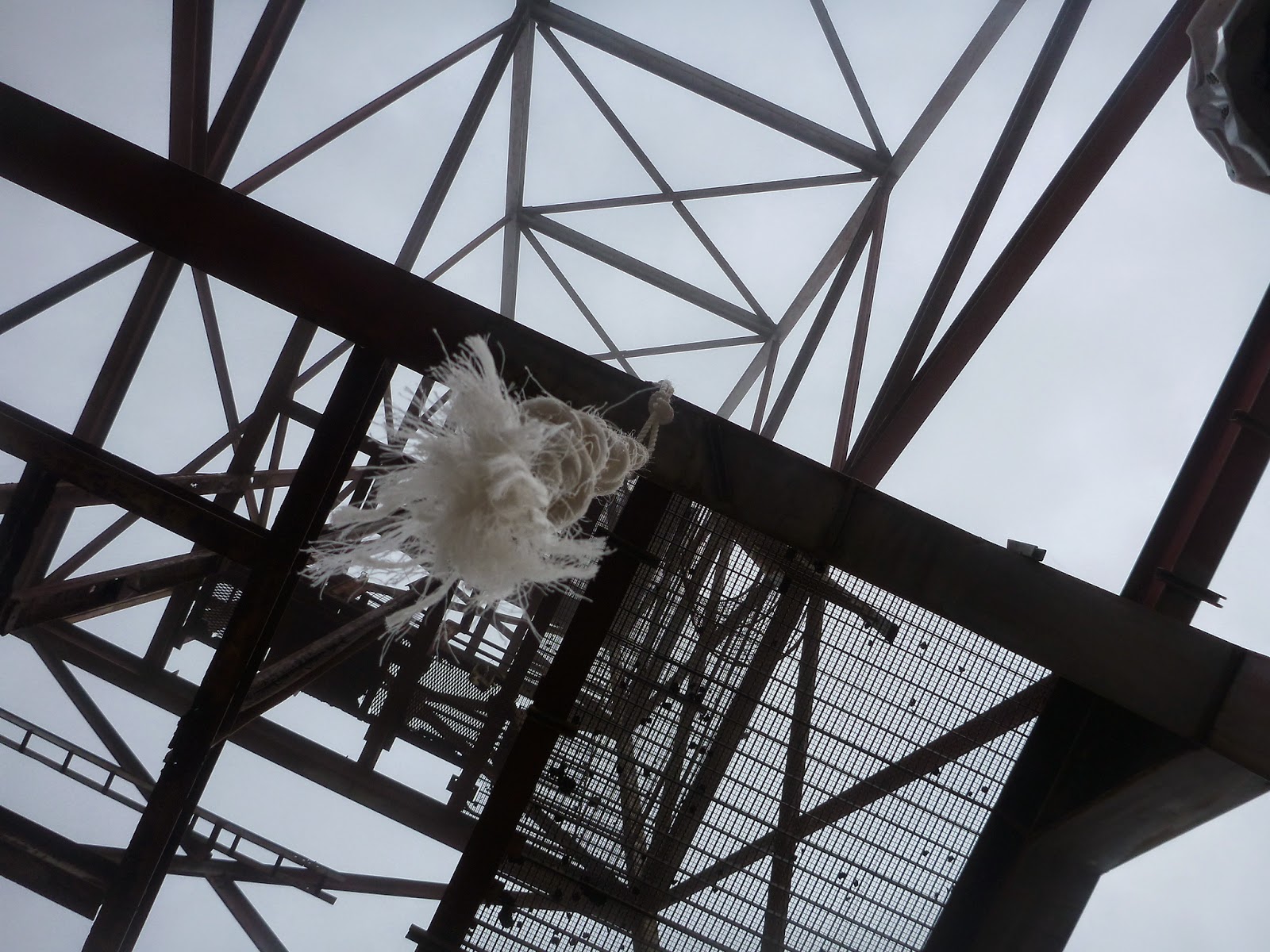 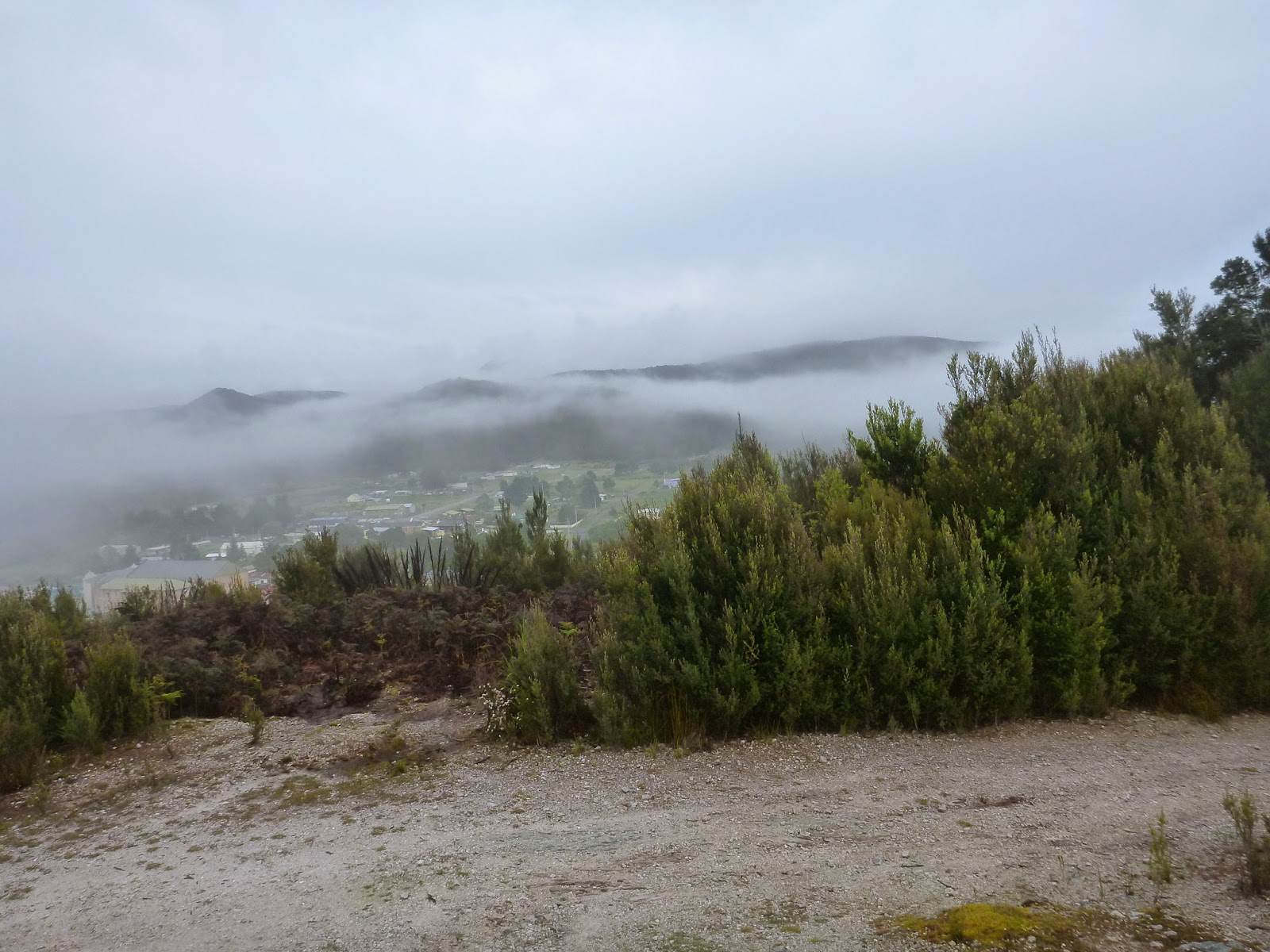 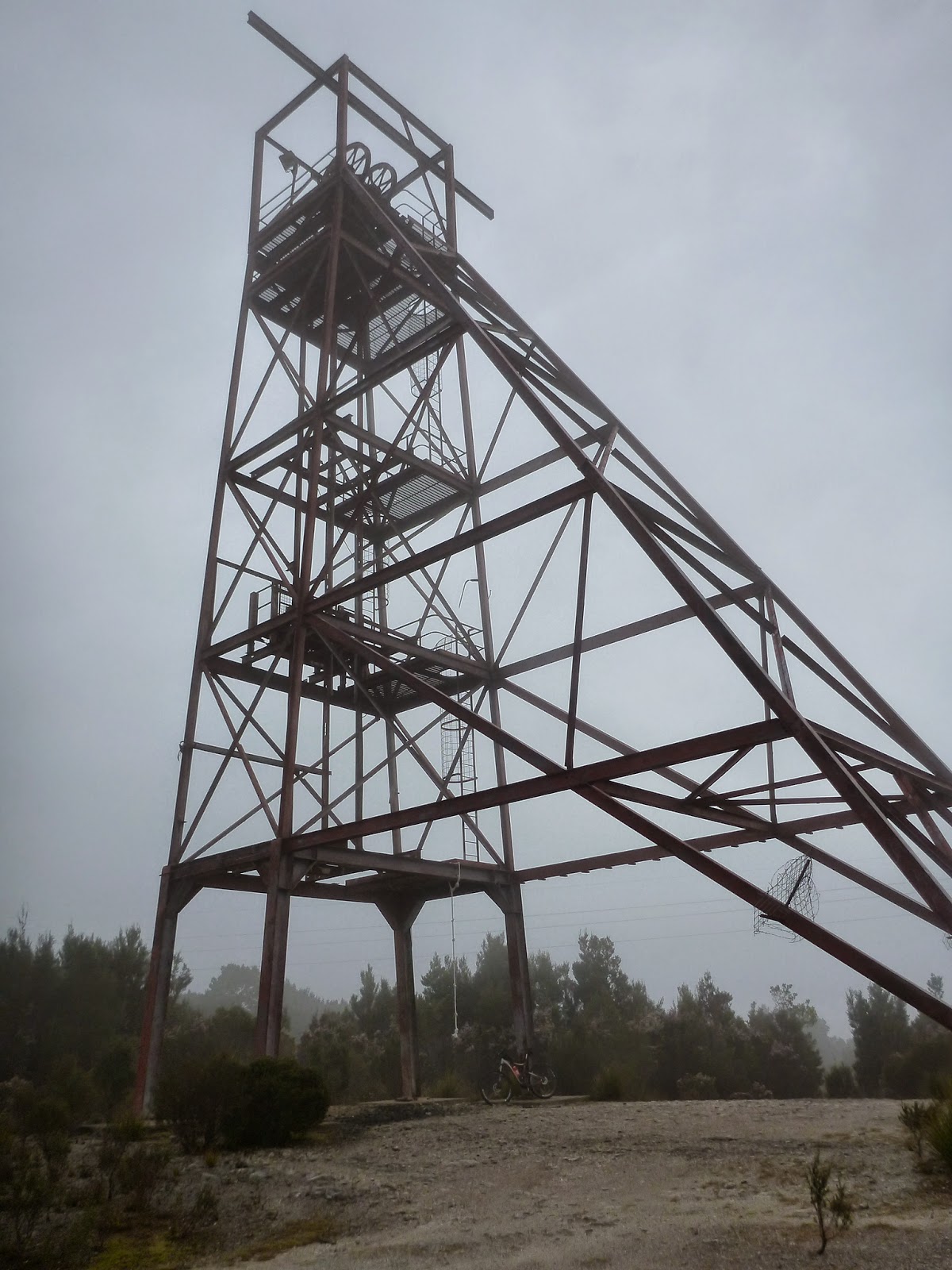 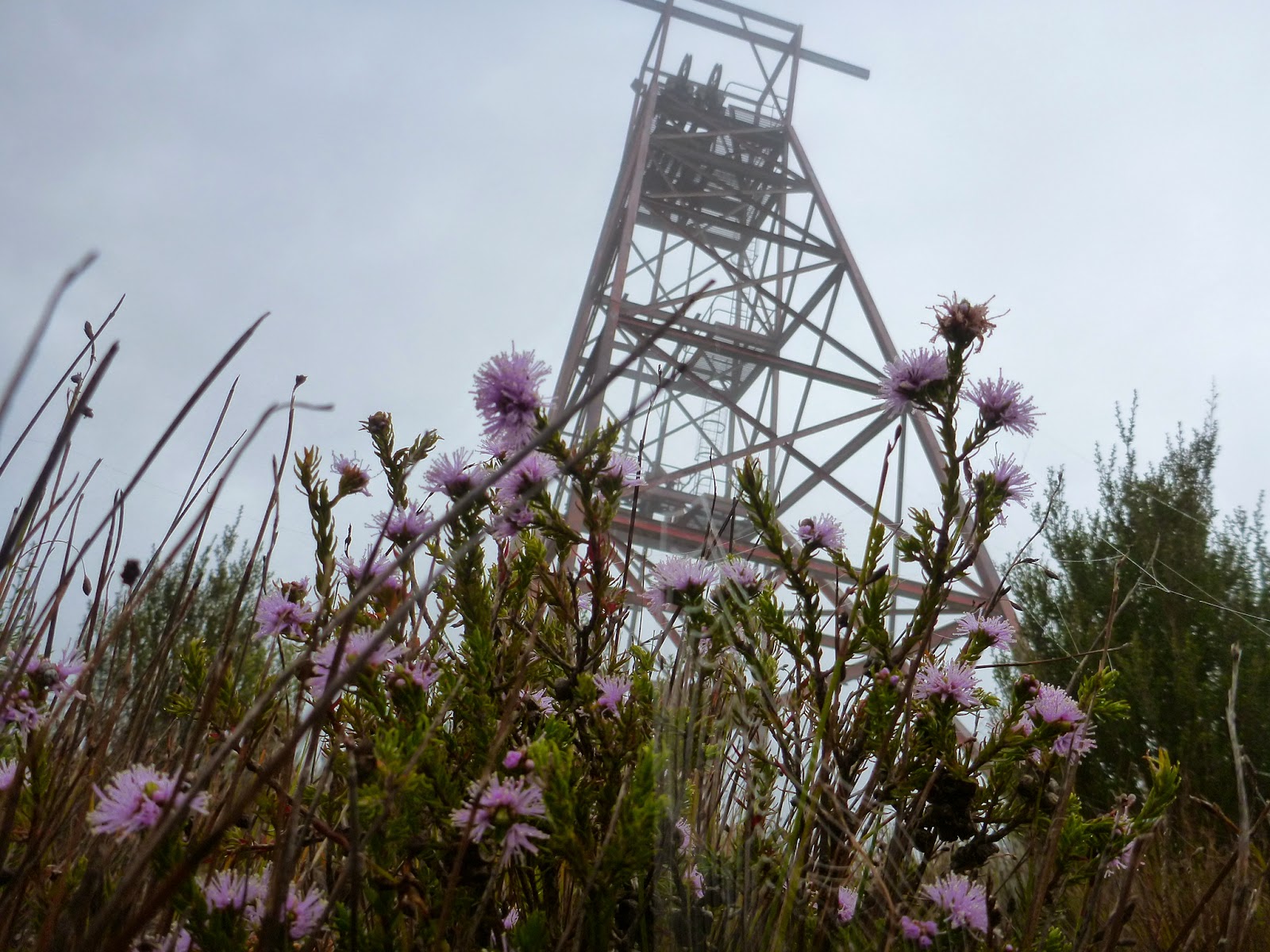 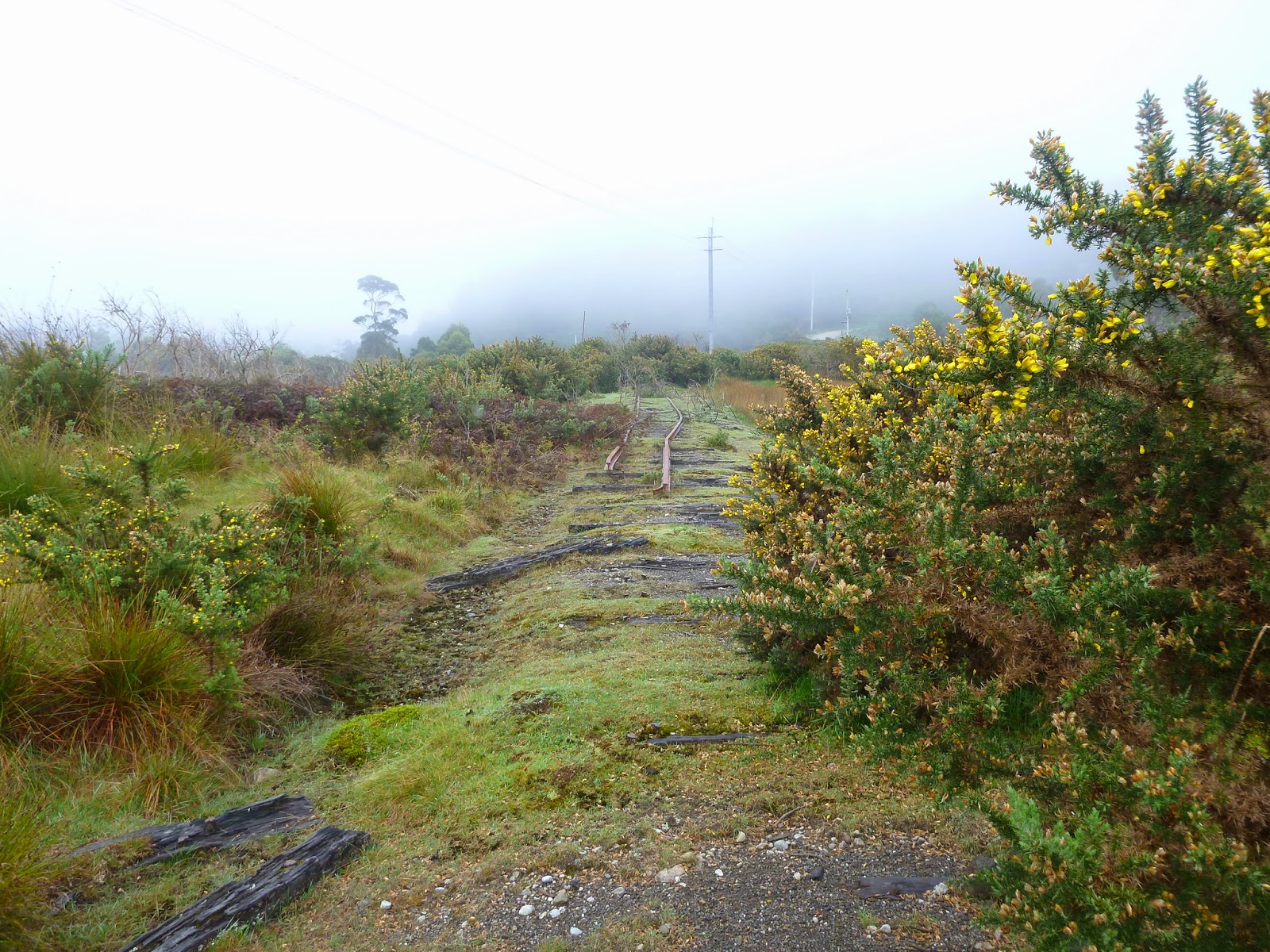 After a brief trip through town, I followed my trail notes up a back way to the Spray Tunnel (off the corner of Pillinger and Counsel Street) which must follow the old tramway line because while it’s not particularly scenic, it was a very easy gradient the whole way to the main access road from where I got to enjoy that last lovely ride to the tunnel itself …

I always get a bit freaked out riding through the spray tunnel – it always shocks me just how how dark it gets in the middle and it’s a real mental challenge to keep a straight line through the tunnel when you can see absolutely nothing around you.

But I emerged (heart pounding) out the other side and proceeded down to what I hoped was the Wildside route, turned off … and then it all went wrong. 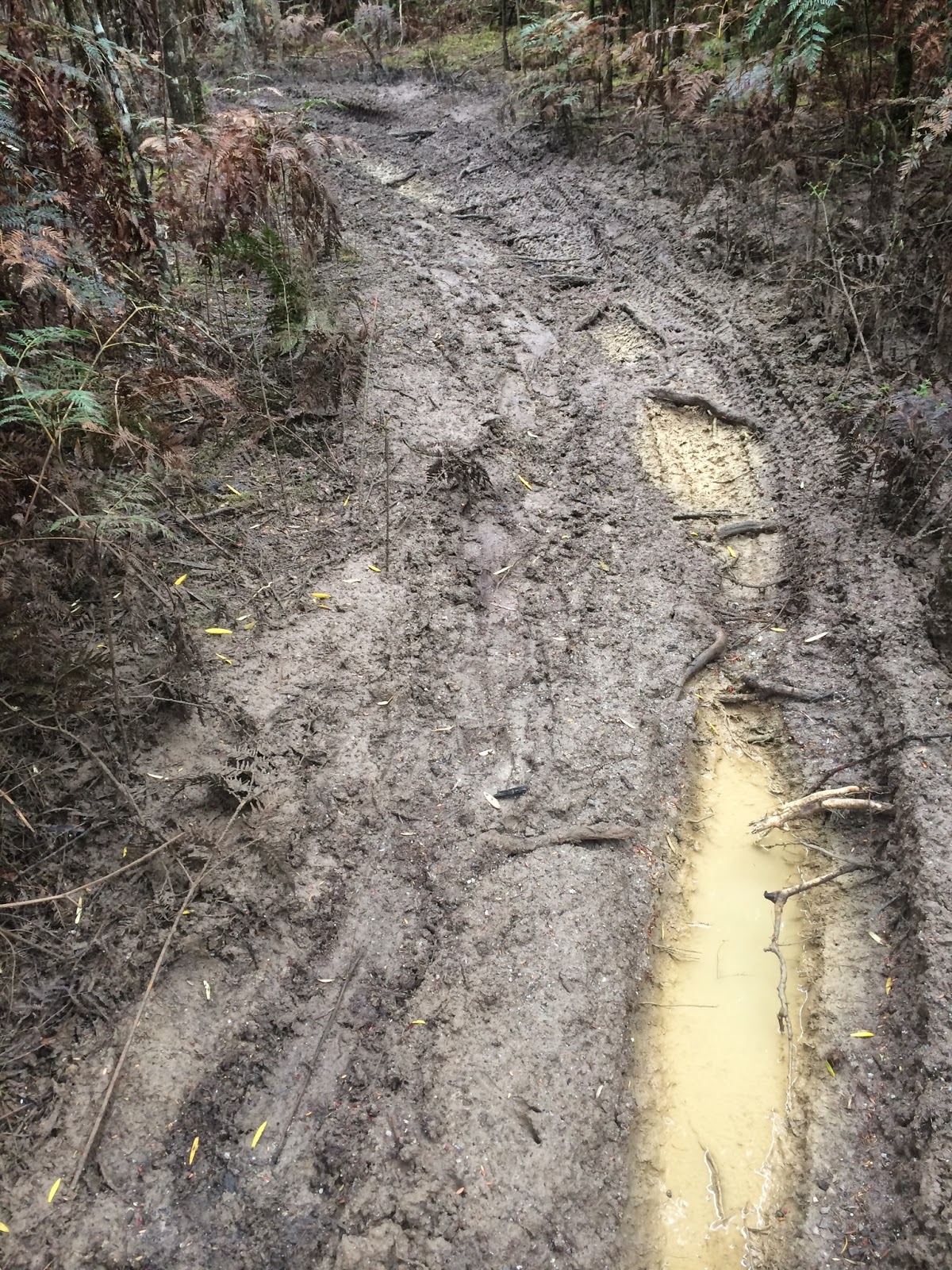 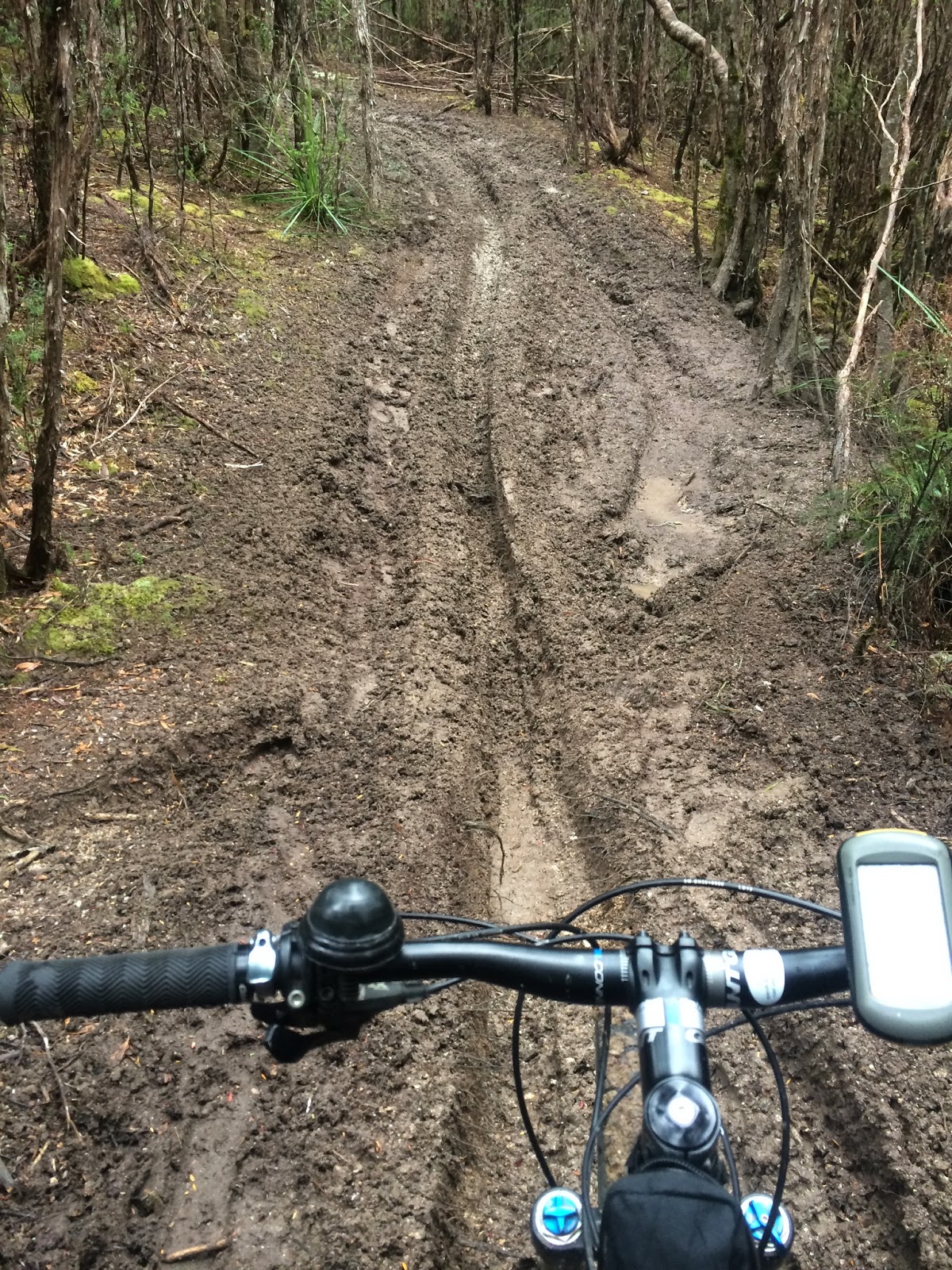 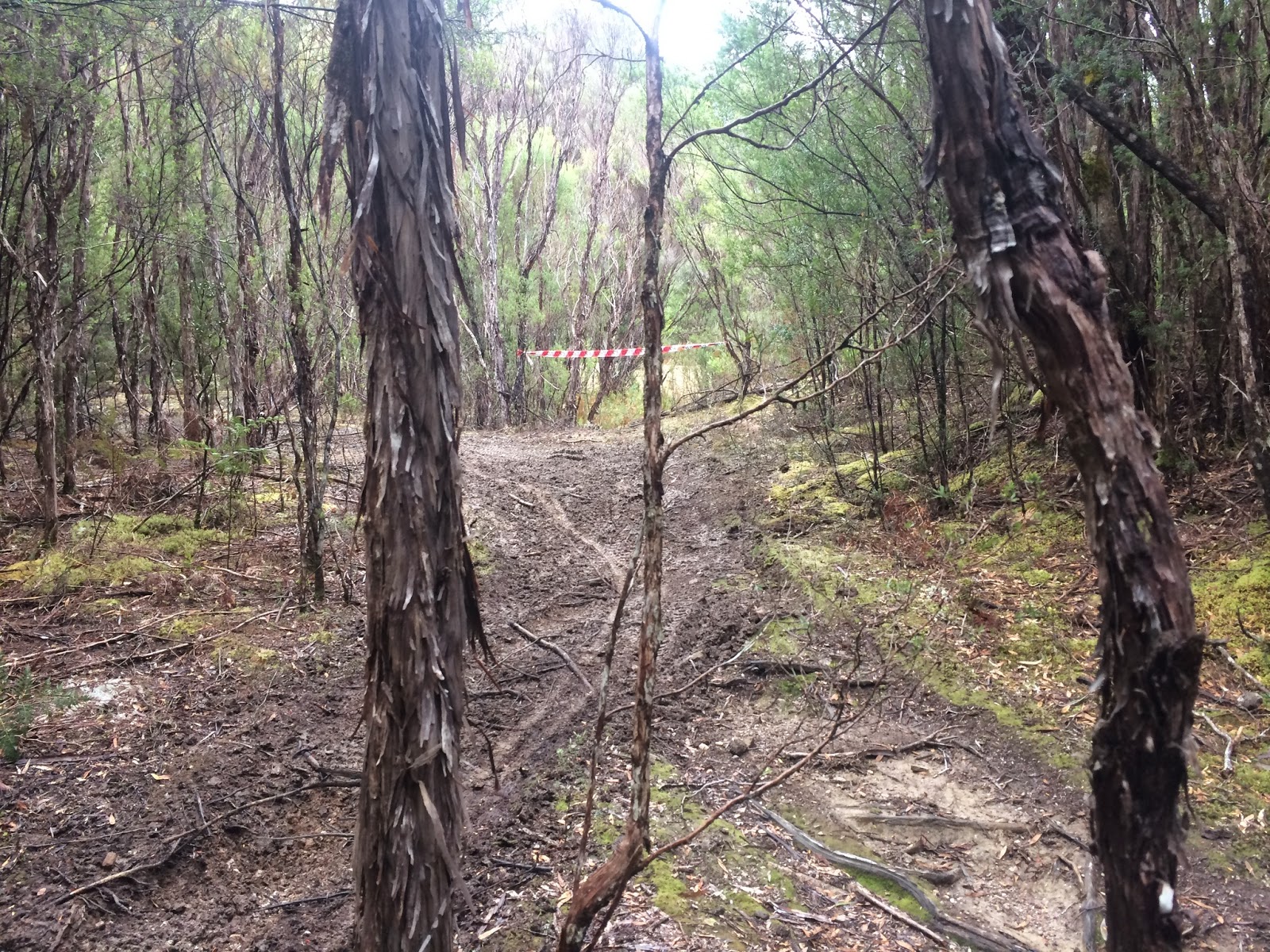 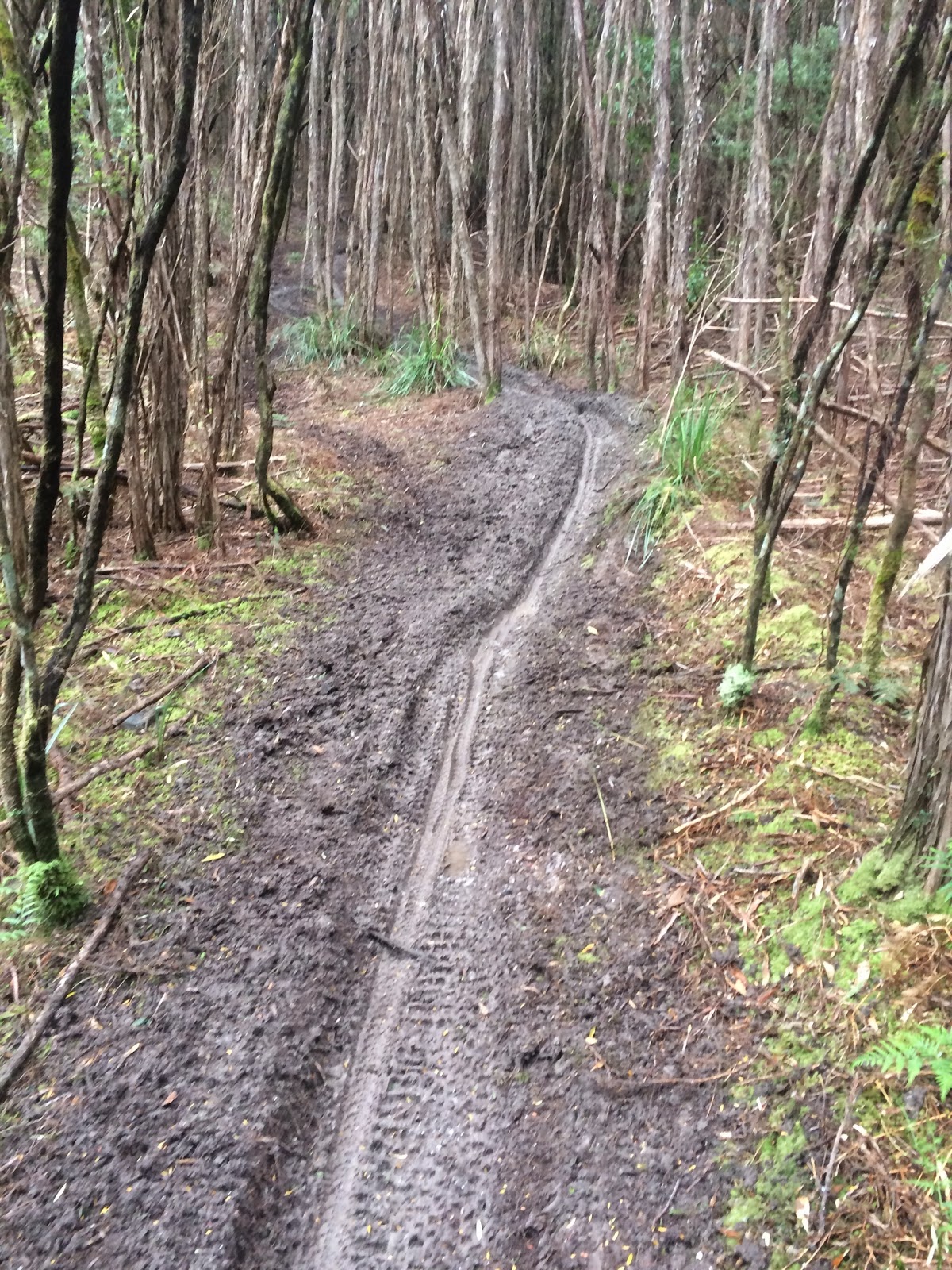 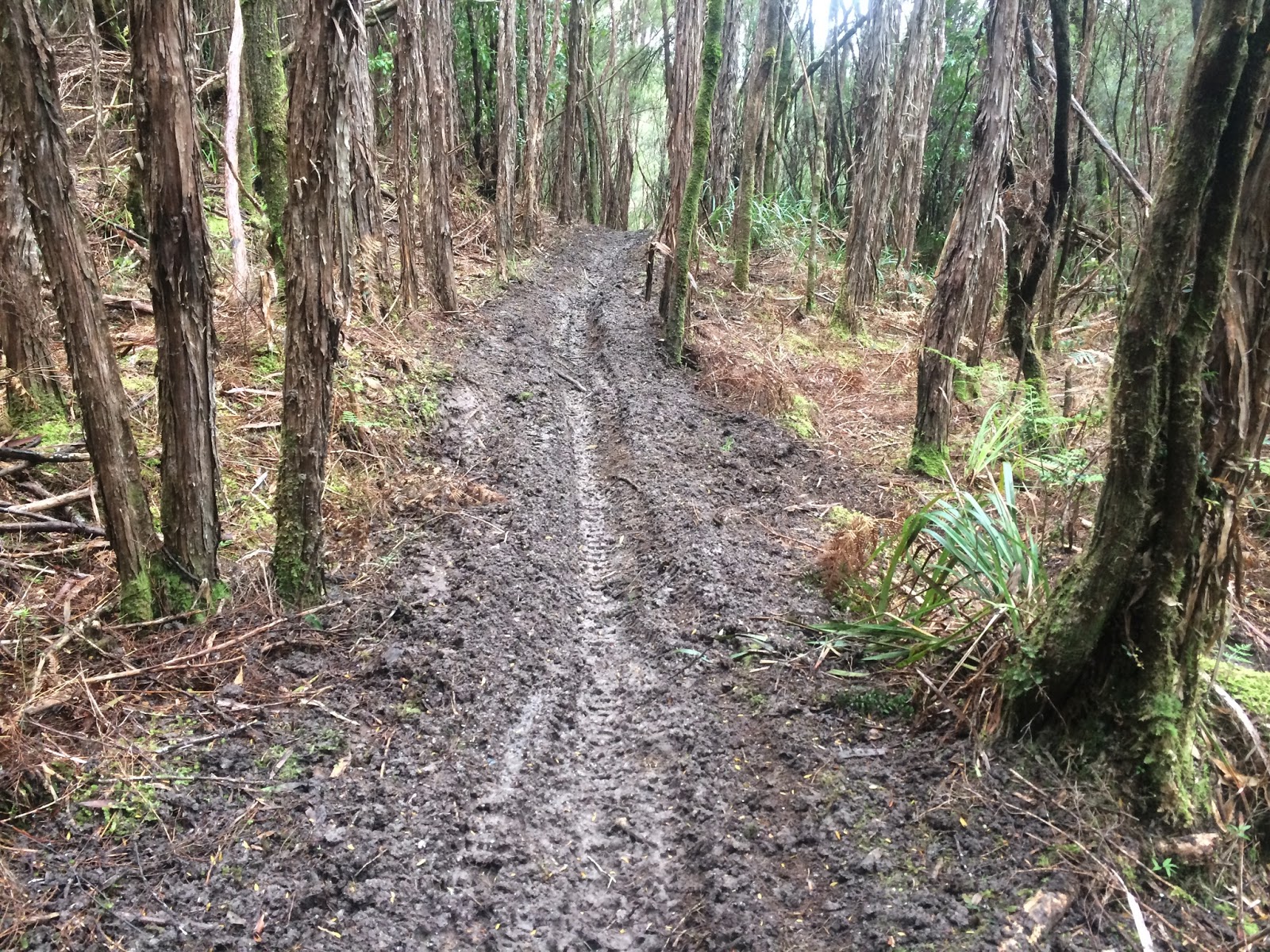 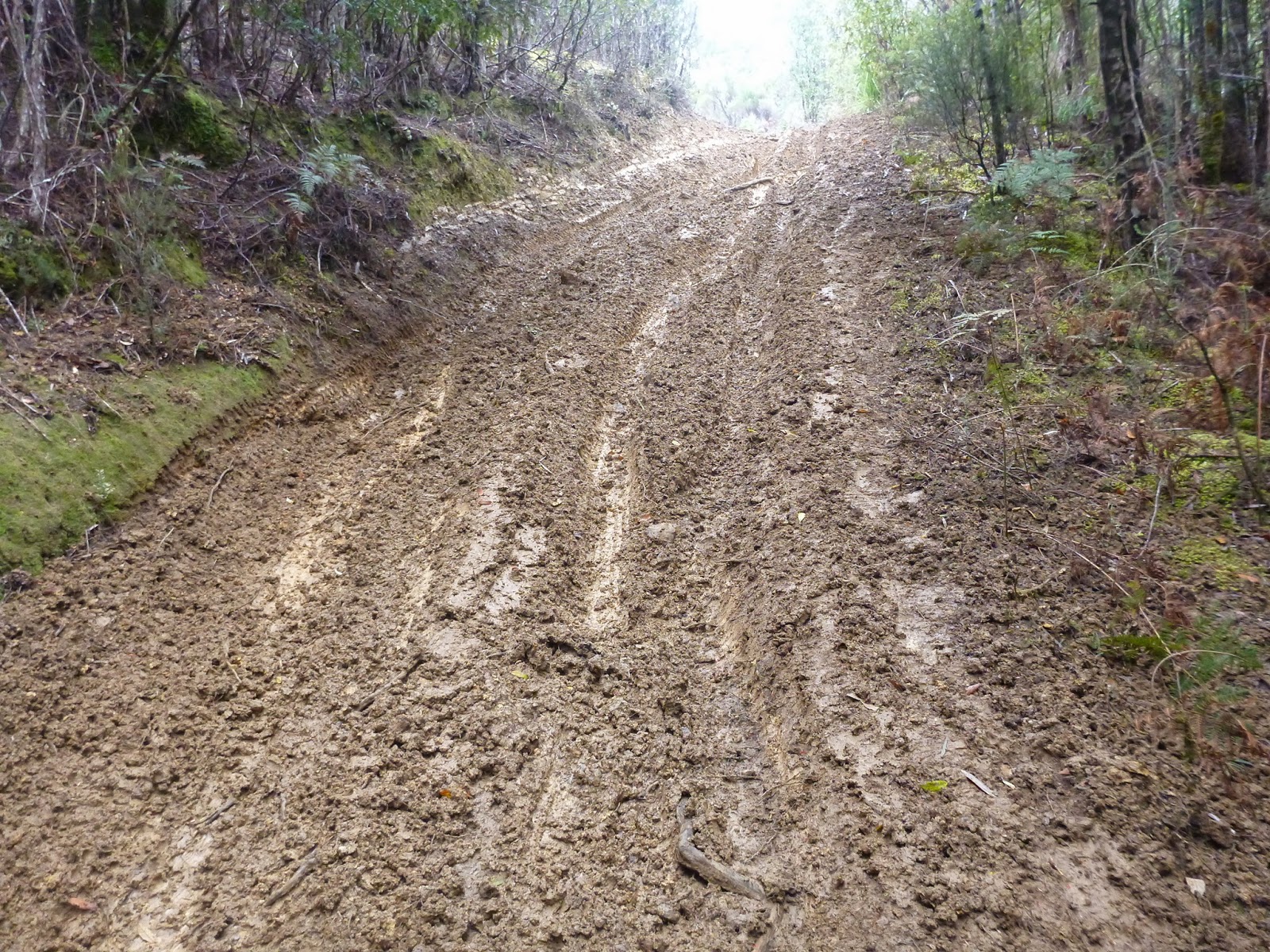 I spent the next 45 minutes pushing and shoving my bike around a churned up, rutted mess of heavy mud that once was a track through beautiful forest before it had been destroyed by motorbikes, and as I went around every new corner and slid up and down hills that were impossibly steep I built up a self-righteous rage, mixed with a bit of despair, at the damage that could be done by a few motorcyclists.

You should have heard the lines I was composing in my head about this mess for inclusion in this blog.

Unfortunately, for the interests of this blog (a self righteous rage is always fun to write) in tandem with this build up of rage, there was also a growing awareness that I couldn’t be on the Wildside route anymore because there was no way I had ridden this sort of terrain, and sure enough when I (finally) got back to the Caravan Park, Lorraine there confirmed that there had been an Enduro race on the trails I had wandered onto (see map below) the weekend before.

In short, I was being a self-righteous idiot.  So sorry motorbikers for all my nasty thoughts thrown in your direction.

The one advantage of this little detour was that I got to ride through the Spray Tunnel a second time (admittedly this time I took out my iPhone and used its ‘torch’ to give me some illumination as I rode through which was a much more satisfactory experience) and as I was by this time past my check out time at the caravan park, I hightailed it back to the Caravan Park and called it a day …

All up I really enjoyed this route, and I think with a bit of thought to routing past a few places of interest in Zeehan and a bit of trail building around some of the steeper ascents and descent, it could make a really nice little warm up circuit for people to ride. 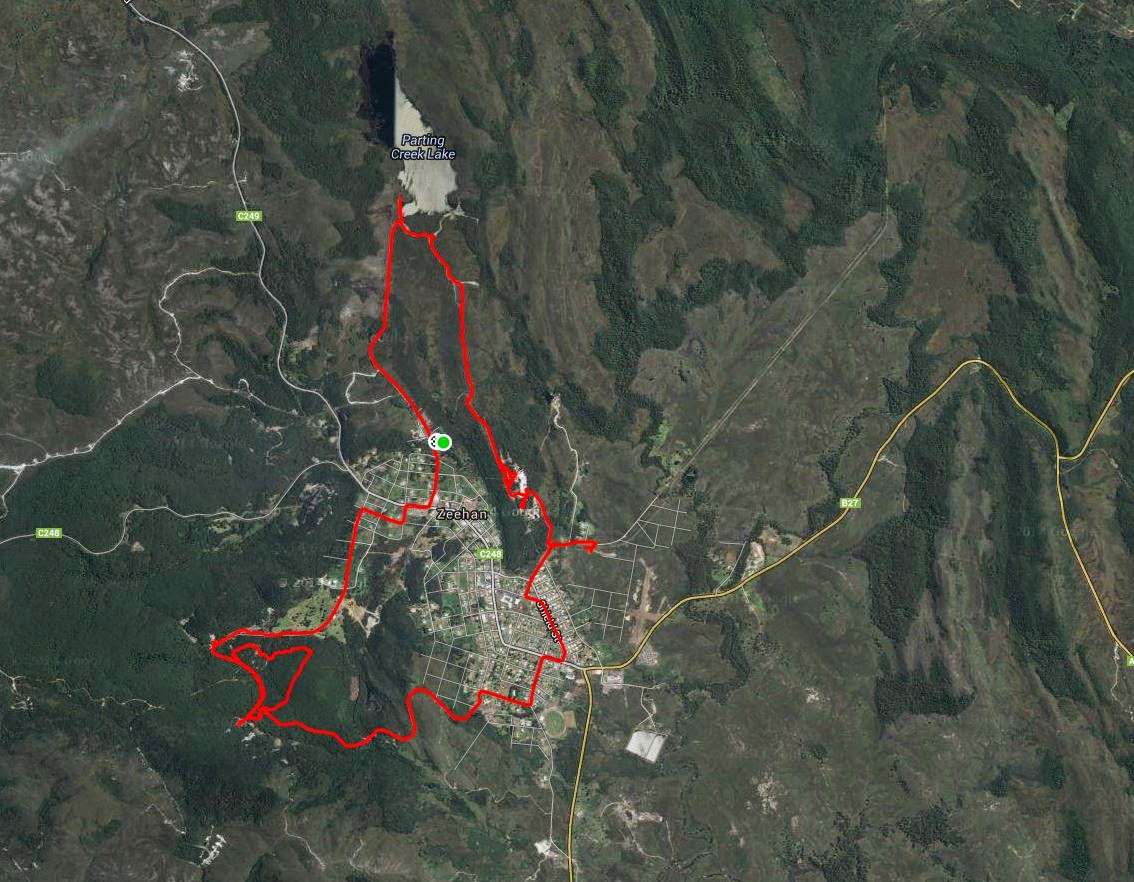 So my thanks to the Zeehan Silver City Group for bringing this one to my attention, and one day soon I’ll try and get it up on TassieTrails.org