Little did I know that as I hurtled around the first race stage of Wildside MTB  2014, that I was in fact passing another significant milestone …

But this may not be that exciting to anyone but me, so back to the race …

I had a  race plan and that was to survive each leg, one by one, until I got to the finish line.

I therefore knew exactly where I wanted to be as we set off, and that was safely tucked into the back of the pack while I got myself into the race.

Unfortunately I missed the main part of the pack.  Actually, truth be told,  I missed the whole pack and found myself dangling off the back … obviously time to pull out the camera and pretend I was there deliberately … 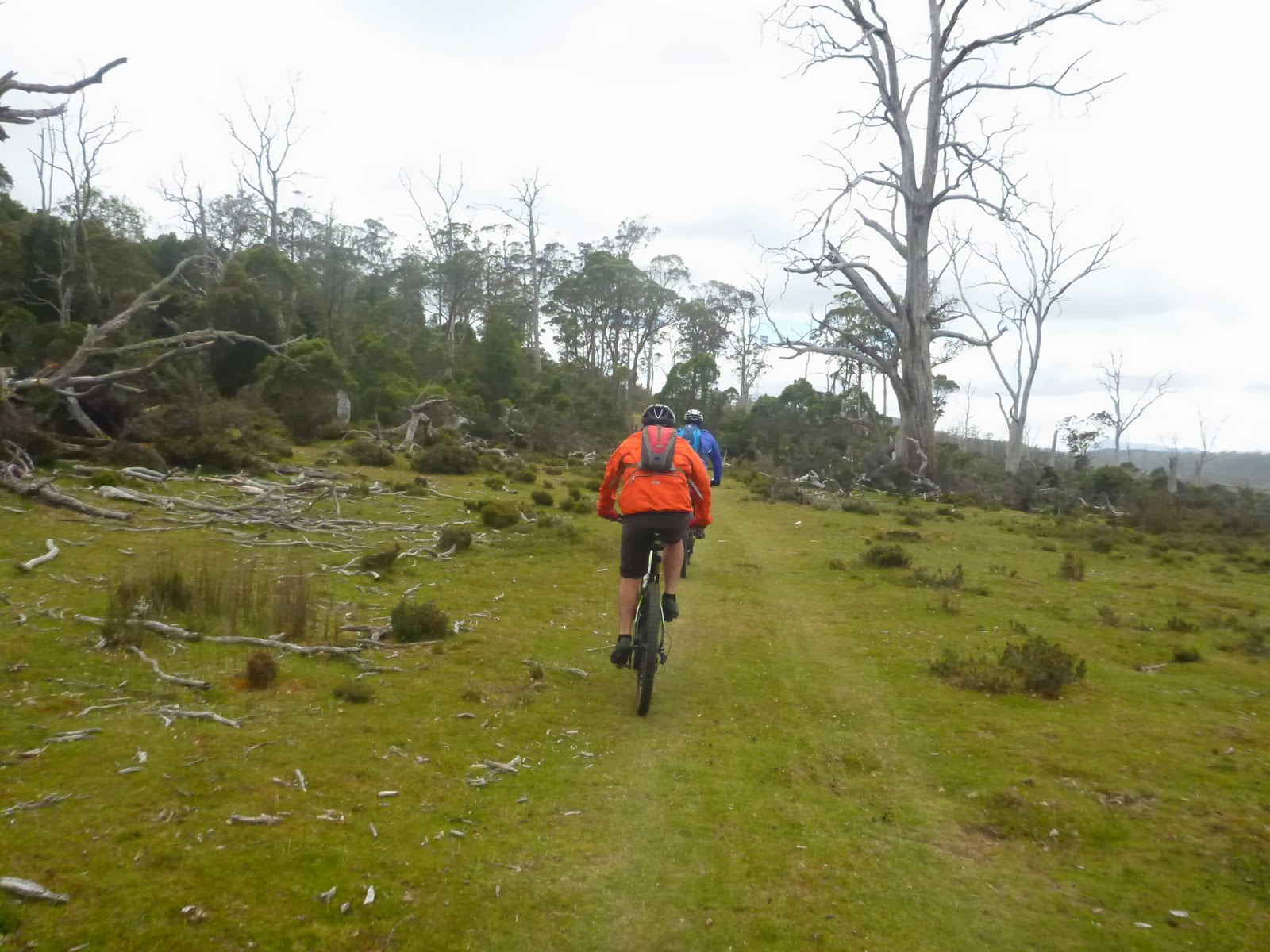 Within the first few hundred metres however I went past the first cyclist with a mechanical problem, and then another and another and I realised that even where I was – I wasn’t coming last!

The cradle stage is absolutely beautiful riding, lots of fast track, gorgeous scenery and some really interesting surfaces from grassland to creek crossings.

What I liked about it even more was that after the lungs and legs had warmed up I actually started overtaking people … I mean real people … not just people who were on the side of the trail with broken chains or flat tyres. 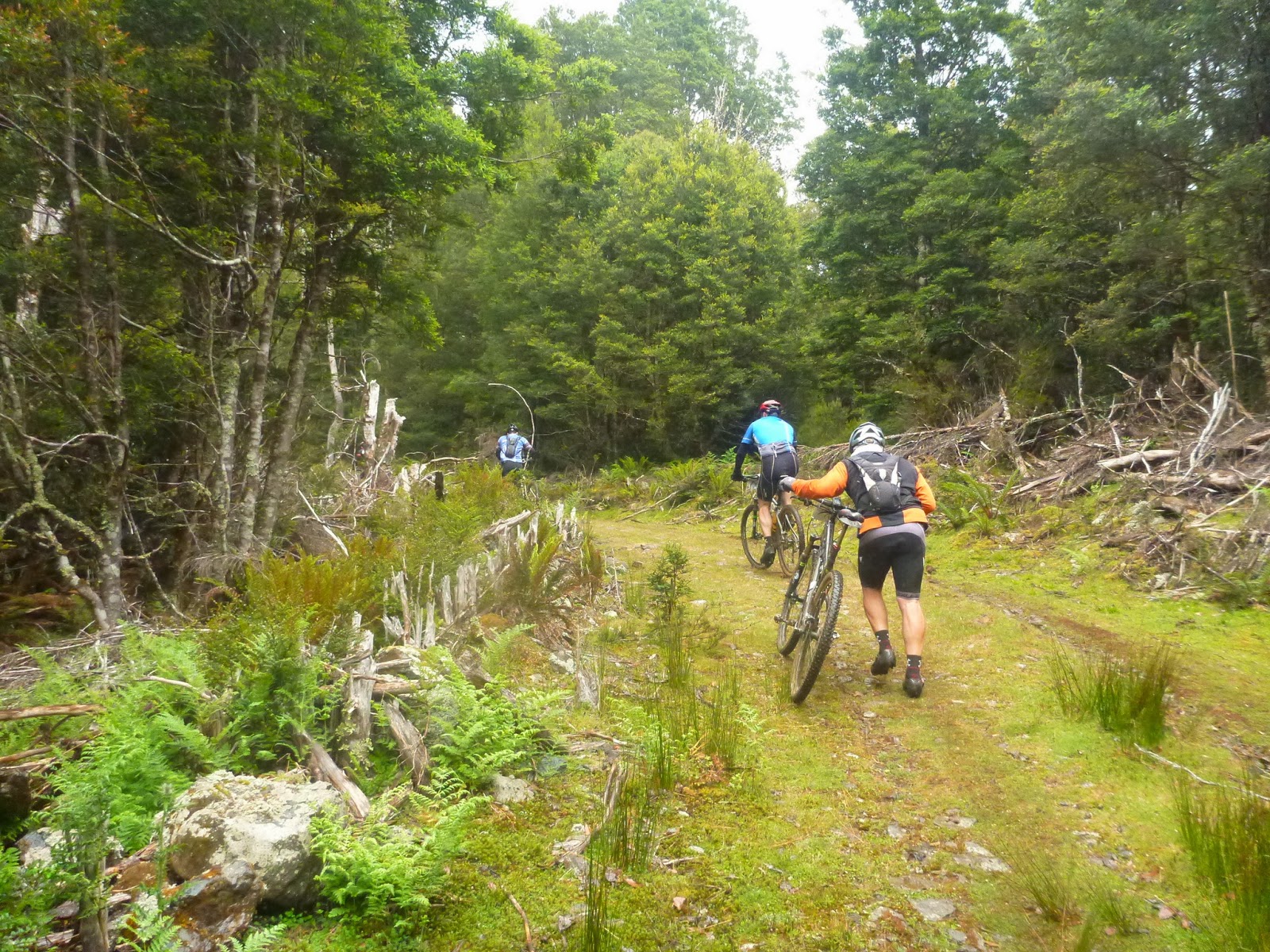 Almost before I knew it, I passed the 5km, and then the 3km, to go signs, and despite feeling a bit cold from some rain showers that were coming through I was loving my bike, loving my riding, loving the tracks and starting to feel all of those pre-race doubts and fears burn away in the excitement of the race.

Then, just over a kilometre from the finish line, I went over a rock and my rear tyre just blew off the tyre with a loud bang.

Then repeat it several times.  Loudly.

I pulled off the track, and was relieved to find that the tyre itself didn’t look damaged.  It just looked like it had come off the rim and then resealed.  I pulled the gas pump out of my backpack, quickly screwed the canister in, chucked it on the valve and pressed the button …

I pulled it back off and checked everything, tried a few more times and then finally realised that for some reason the pump was stuffed.

I’d already had about 5 or 10 people go past in this short time, and with only one option left to me, I pulled out my tiny emergency hand pump and proceeded to pump like crazy trying to get enough air back in the tyre to ride.  The gauge said 20 PSI when I first put it back on, and it seemed to take an age for it to move off 20 towards 25, then 30 psi and finally as it got somewhere near 35 psi, I decided that that was enough pressure to get me over the finish line, packed back up and nursed myself over the last kilometre and a bit to the finish line.

Stage 1 was done.  It wasn’t a disaster, but nor was it a success.

As I tried to figure out what was wrong with my CO2 pump (by handing it to Peter Bird to see if he could fix it for me) I looked around with a bit of envy as other riders got changed into dry clothes and put on rain jackets before setting off on the 15km or so ride to the lunch stop.  The thought started to work its way into my mind that maybe sending my support crew off to go sight seeing wasn’t the smartest idea in the world.

I was however reunited with my support crew at our lunch stop after a fairly cold cruise stage ride.

Their timing was perfect, arriving just after I’d stood in the food queue for 10 minutes and was sitting down to eat my muffin (little monster got that), chicken roll (I got that), fruit (markus monster had that) and chocolates (that was a free for all as I wasn’t giving up my chocolates without a fight).

My support crew had apparently had a pleasant, if somewhat nippy, morning around lake Dove before getting stuck in the traffic jam of spectators on their way to the lunch stop. 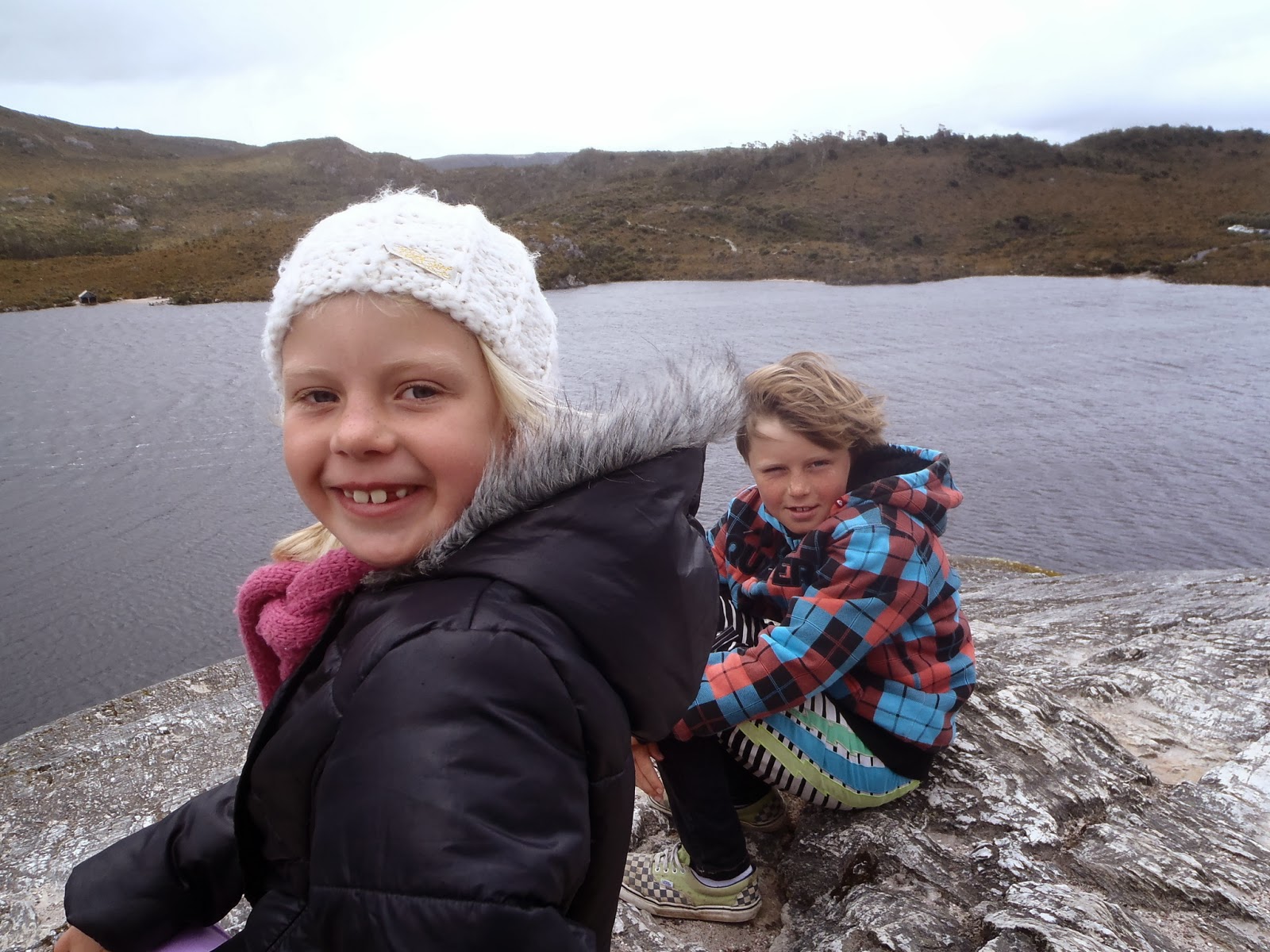 By the time they’d devoured my food, I was shivering because I was so cold sitting there in my wet cycling gear so we headed back to the car to get a warm jacket and rest up for the second competition stage – Que River.

I loved (most of) stage 2, and if you’re reading this looking for race tips and you’re in one of the slower groups but you’re a good technical rider, then take my advice and get on the front of the start line for your group because there’s about 50 metres of open riding before you all funnel into some single track and if you’re at the back of your group, then that’s where you’re going to stay for the next few kilometres.

I, of course, was at the back of my group again … 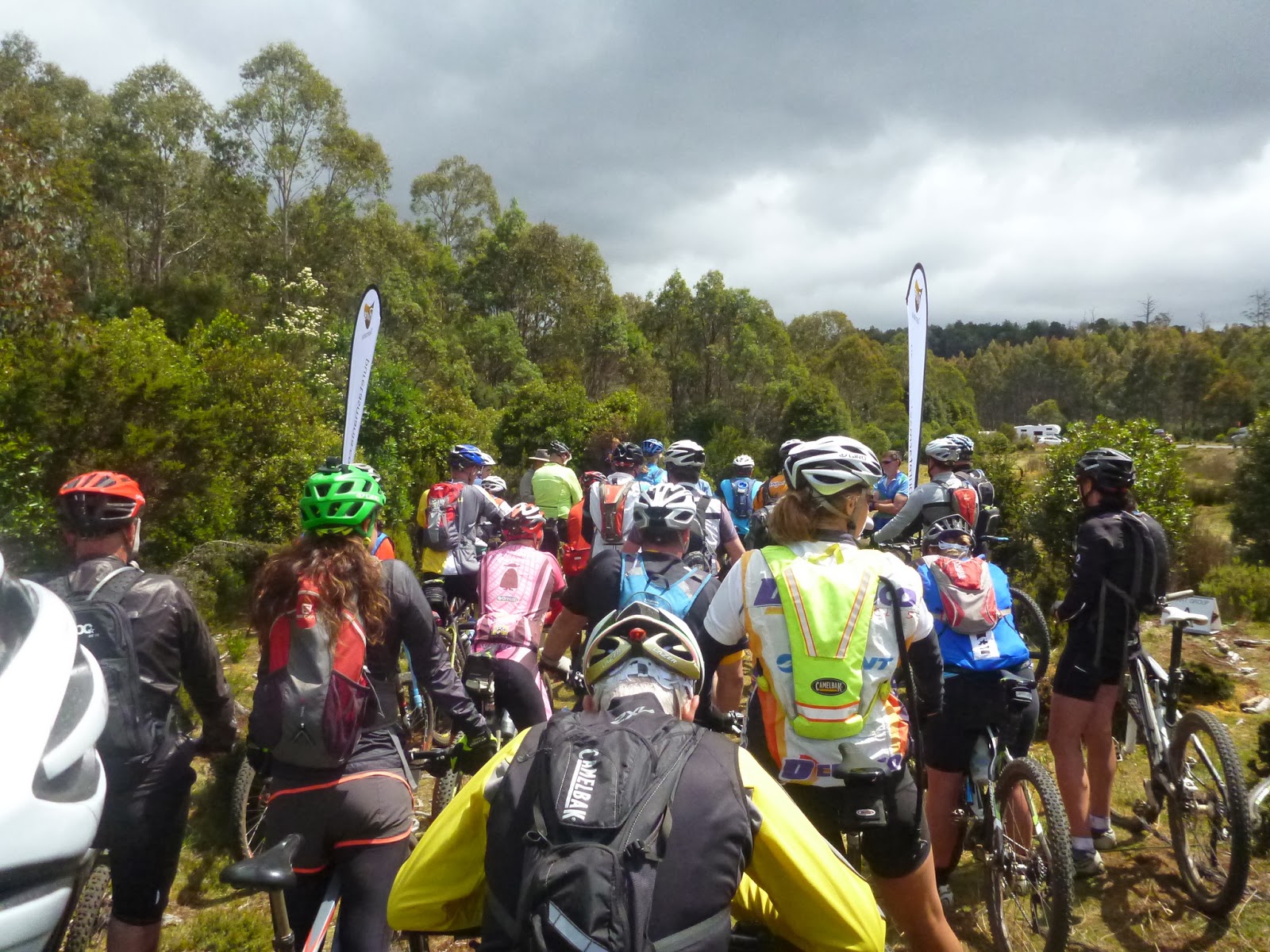 After a few lovely sections of single track alongside the road, you turn away from the highway and follow some fast gravel mining roads which eventually lead out alongside what looked to be some sort of giant tailing dam with old mining machinery rusting around you. 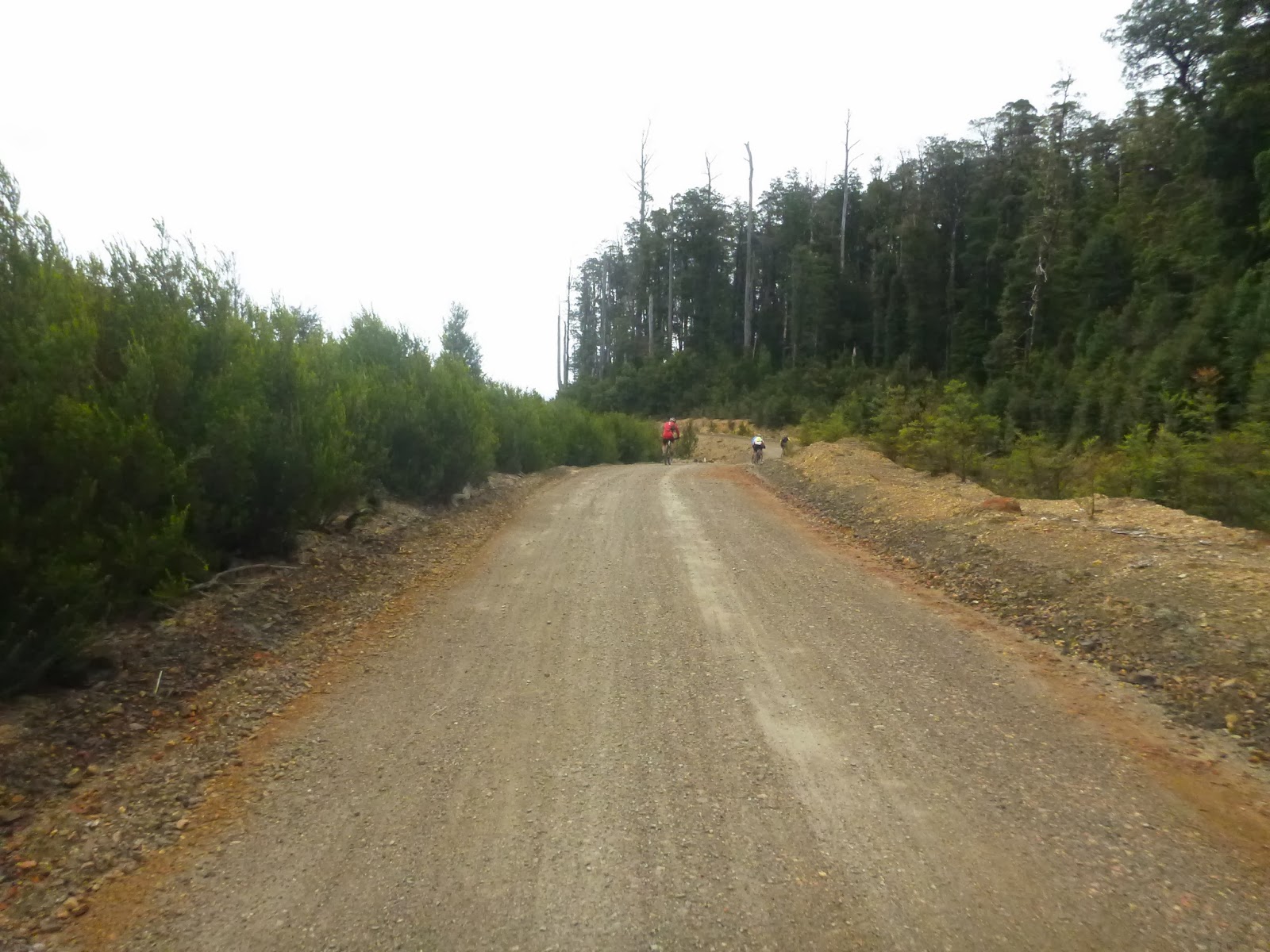 I loved it here and would love to come back and explore at a more leisurely pace (but can’t as it’s all private and locked so don’t get any ideas). 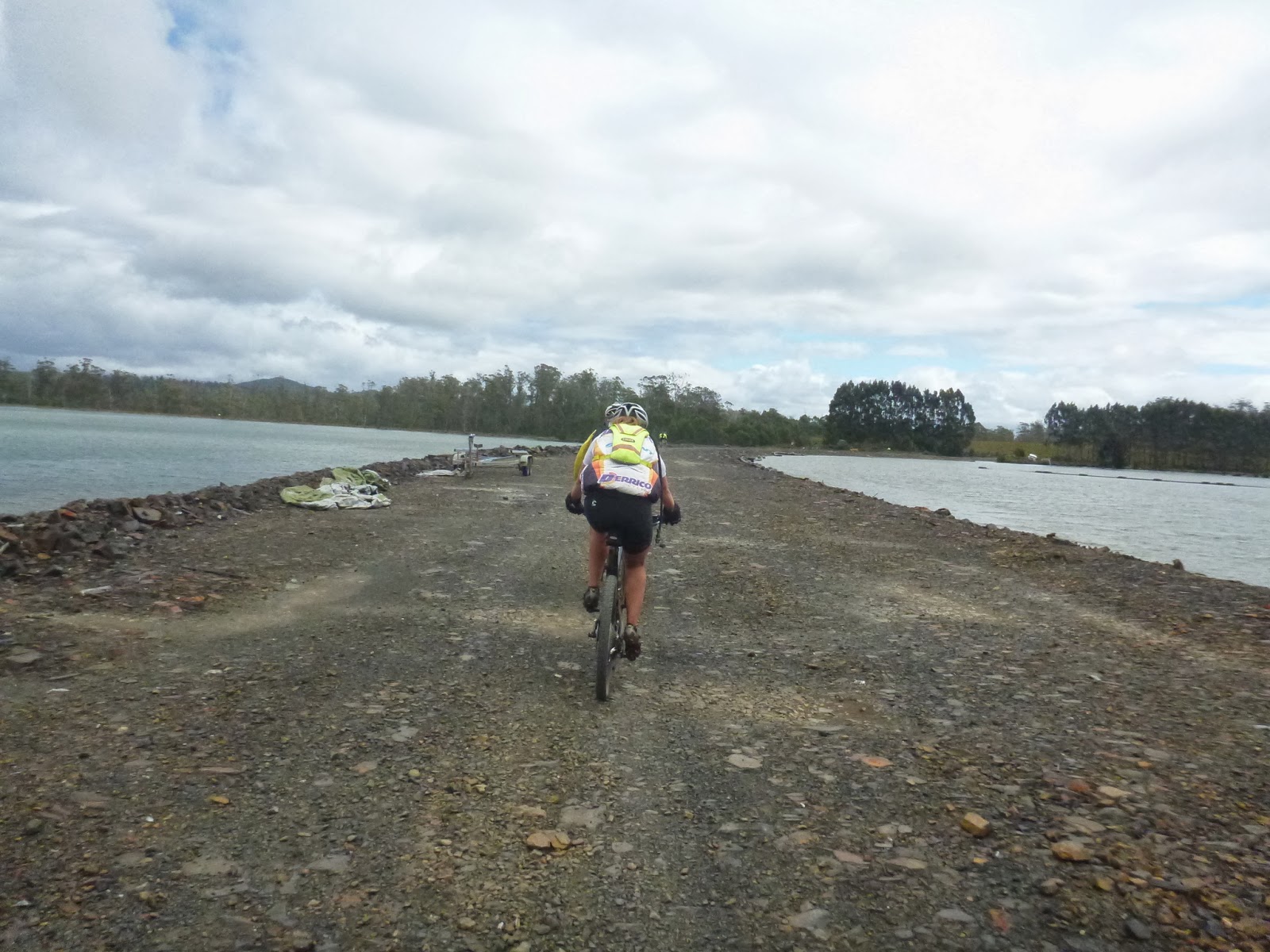 After crossing the lake, there’s another fast downhill section before you dive into some myrtle forest and across a rather deep creek … 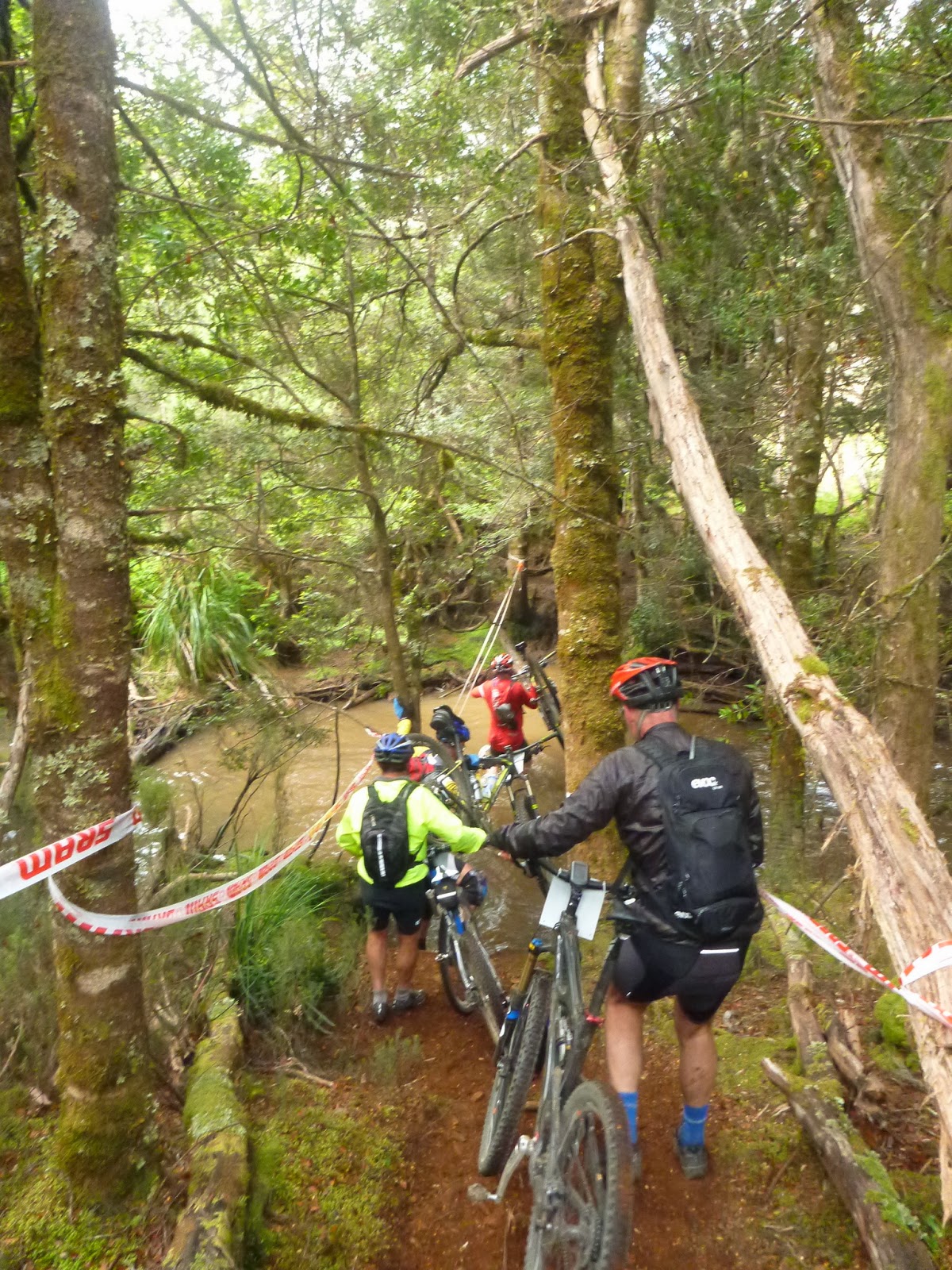 That’s about where I stopped loving stage 2. 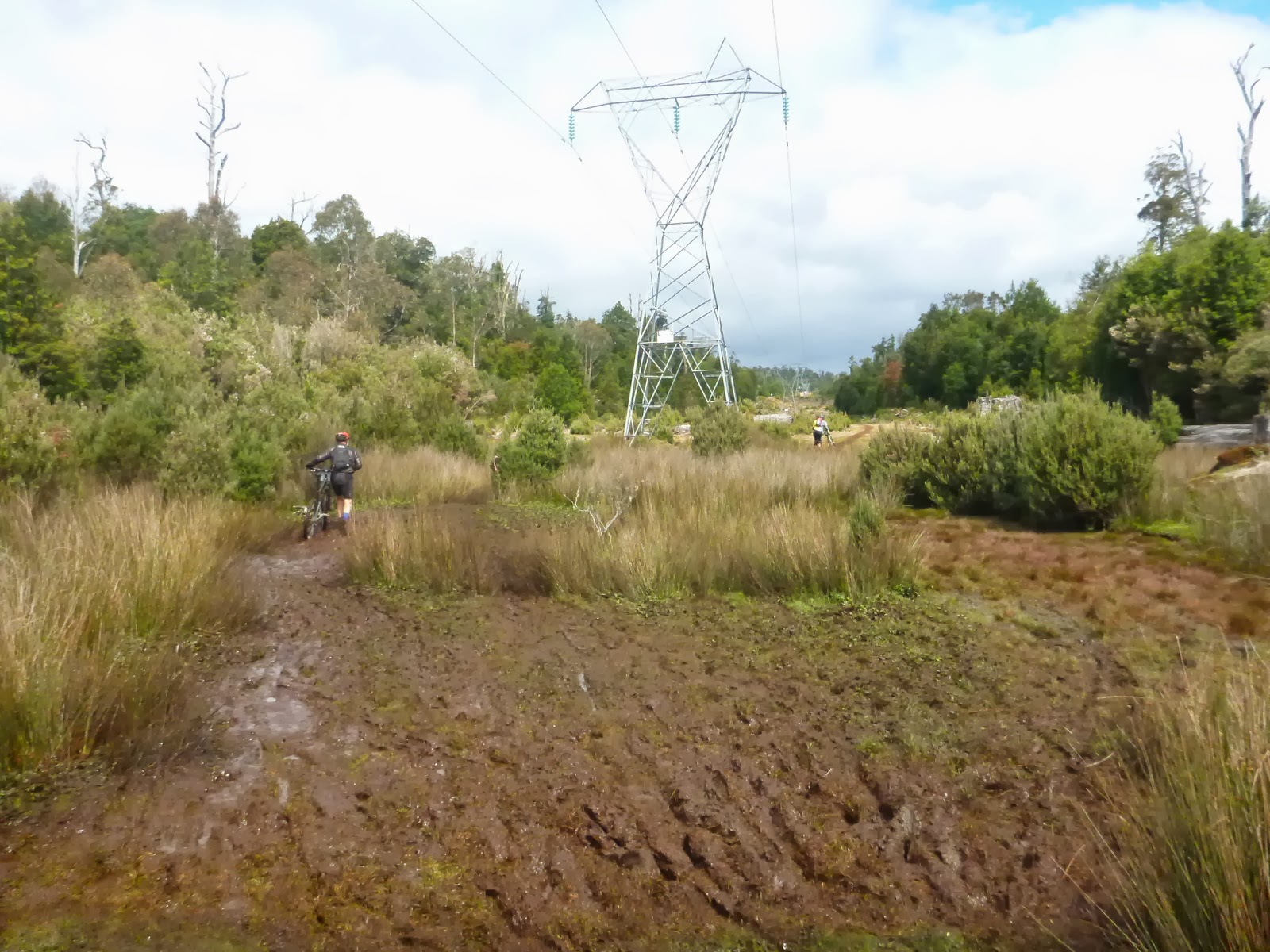 In terms of what was happening in the actual race, after I’d escaped the single track, I’d ridden down 3 or 4 riders, but then had a few pass me in turn, so in the main I felt I was holding my own.

Then we hit the power line track.

Now I’d been warned about this section and had in fact been told it was brutal and unrelenting and sure enough all off the people I’d overtaken went past me on the second or third hill where I had to get off for the first time and push.

Now the stage route said this section was 20kms and I remembered from the route profile that the last 2kms were mainly downhill so at 18.5kms from the start, I looked at the hill I was climbing and figured that it must be the last big hill of the day and so I decided to bury myself completely trying to ride down the guys in front of me.

Which worked really well until I came around a corner … and saw the 5kms to go sign in front of me.

I believe at this point that I was heard to say “muck, pluck, shuck, truck” … or other words that sounded something like that.

Seeing that 5km to go sign was like hitting a mental brick wall, and I had to mentally regroup and find some new energy to ride the extra three kilometres to get to the finish line, but I did get there and I felt I had done a pretty good stage.

In fact, despite some shortness of breath, I was feeling pretty sh*t hot after my first days riding as this whole adventure was seeming so much more achievable than it did just a few short hours ago.

Yep, I was feeling darn near invincible as I hurtled down the highway on the last cruise stage (Boco)  to Tullah.

So back over onto the side of the road, out came the mini pump and in went the air, one pump at a time, as I watched the convoy of cyclists go past me yet again (I should say that I had actually bought a second gas pump at lunch from Sprung, but didn’t want to waste a cylinder on a cruise stage).

Still, I did get to Tullah well inside of the cut off time and headed off to reunite with my Support Crew.

Unfortunately, my string of bad luck hadn’t quite ended and I found myself walking into a major crisis … we’d promised the monsters bunk beds each night, and there were no bunk beds in our rooms tonight and if that wasn’t bad enough … little monsters bed didn’t have an electric blanket and everyone else’s did.

That was nearly Wildside over for us then and there.

Fortunately chicken nuggets, ice cream and her choice of program on ABC3 made the world right again and so we didn’t have to pack up stumps and head back to Hobart.

PS.  On a serious note I was having big problems getting oxygen into my lungs, almost passing out on the finish line and then breathing like I was at high altitude all night just gasping for breaths.  It was actually serious enough that when I asked Kim if she could go out and clean my bike for me … she did.