For example, that opening line is a strange introduction to a post on a cycling trail, but let me shed some more light on why I opened this way (yes, you should break out the biscuits and make yourself a cup of tea, because as usual I shall take the most indirect route possible to get to my point) … 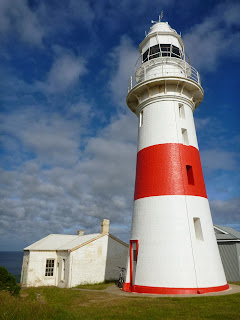 As I said in my previous post there were three things that drew me up north this weekend, and the third of these was a little advert I’d seen in one of those free tourist brochures recently about a new walking & cycling trail from George Town to Low Head … 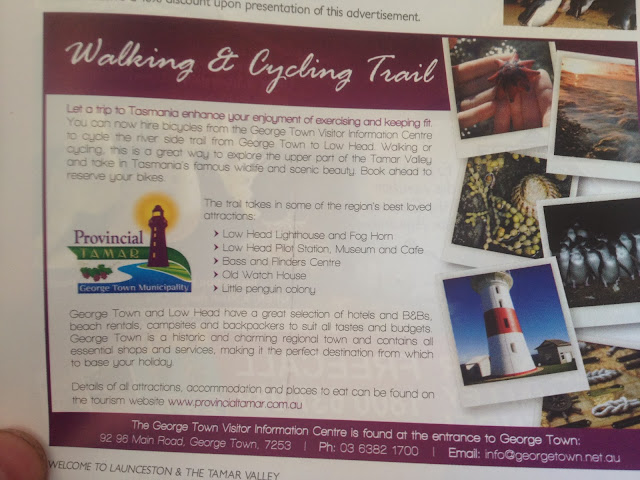 Somewhat coincidentally, I saw this very brochure in the same Campbell Town shop that didn’t manage to serve me breakfast just 23 hours earlier.
So this planted the seed, and then when I noticed that TBug had a ride along this very trail this Sunday, I sort of had to pencil it into my book of options for the weekend (if you ask Kim about this “book of options” she will explain it’s my excuse for never deciding what I’m going to do until I wake up on Saturday morning so that her life is impossible to plan).
Unfortunately, despite managing to get up to this end of the State to theoretically join the TBug riders on their ride, I had figured out somewhere along the line that there was no way I could join them and get back down to Hobart in the early afternoon to bury Kims kids and then put up the Christmas tree as promised … 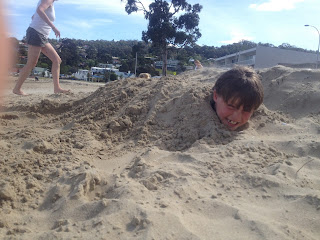 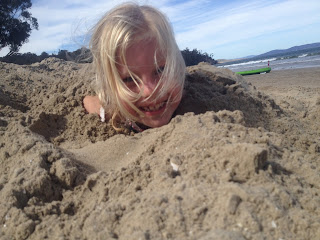 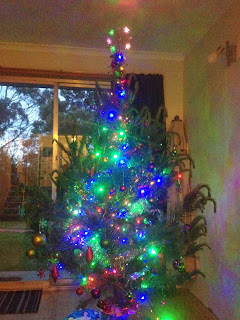 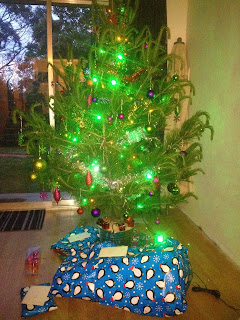 … and (as can be seen above) I was not going to miss the opportunity to do either of these things (PS. ever tried to photograph a Christmas Tree … it’s beyond my talents).

So, I reviewed my book of options, and decided to go for option 26C – get up early, drive from Bridport to George Town (checking out the other end of the St Albans Bay 4WD track along the way) and be on my bike ready to ride just after 7am.

I opted to start at the Visitors Centre (which is on the left just as you come into town) because they hire bikes for this ride. 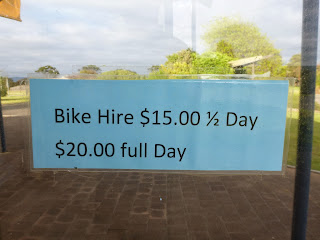 Unfortunately (though not surprisingly) they are not open at 7am on a Sunday morning so there was no one to actually tell me how to get onto this cycling route, and although colourful, the map outside the visitor’s centre isn’t particularly useful for navigation purposes … 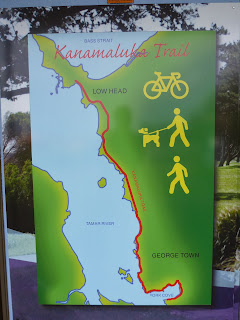 Just as an aside (to the several other asides I’m already on before coming back to the “strange bit” that this blog is meant to be about) you can go here to find out a little bit about the naming of the Kanamaluka Trail.

Anyway, I figured I’d just head straight down Victoria Street to the coast and then turn right, and that sort of worked, in a round about, “it didn’t really work because of all the Private Property Keep Out signs around the Peppers York Cove Resort” way.

But eventually I found myself on the track and once on it, it is pretty hard to get lost. 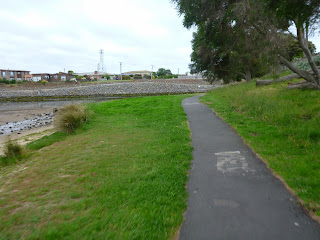 The last few kilometres out to Low Head are all along a wide purpose built multi-use path, and probably the only place you could possibly get lost is at the southern end of Lagoon bay where you could (and I will attest to this) cycle down a little road and assume that the track goes along the beach, when in fact it just follows the road inland.

(PS The beach is better.)

The first part of the trail along York Cove and then stretching out to Low Head Caravan Park is however a much more interesting combination of top of the line concrete path right down to a beautiful little section of gravel single track (easily rideable by road bikes unless you’re previous about getting dirt on the wheels).

Despite the urban nature of this ride, I can see it’s attractions for the family or hire-a-bike crowd with plenty of points of interest along the way, a pleasant coastline, some interpretive signage for those interested in the history of the place (Did you know that Tasmania’s male population almost halved in less than four months in the 1850’s when the gold rush started?  I didn’t), the Low Head Historic Precinct (with museum and cafe for those who don’t come too early), Jetty and finally Lighthouse at the end. 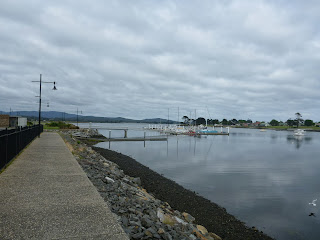 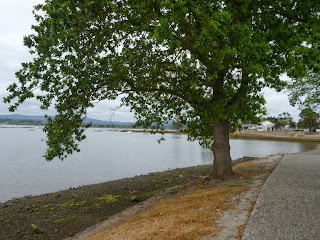 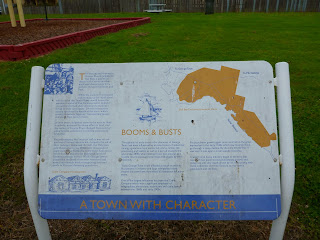 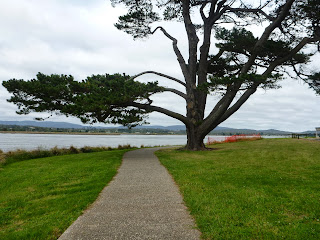 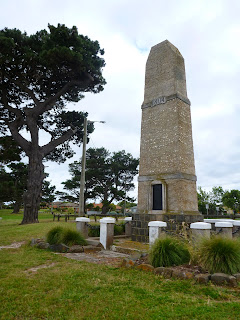 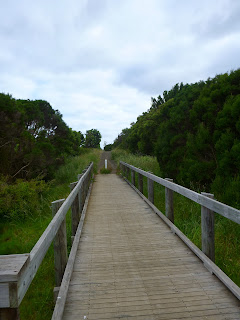 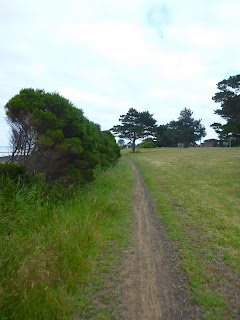 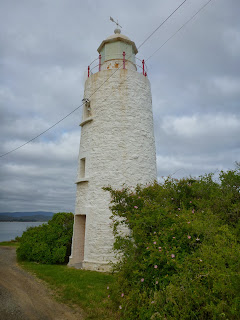 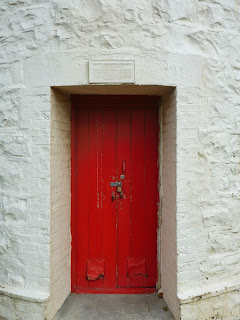 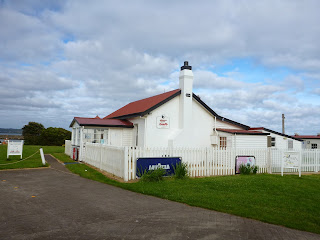 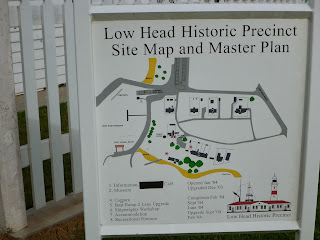 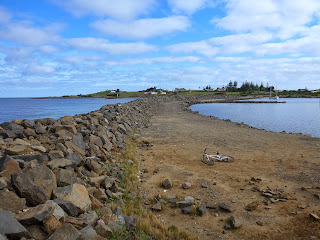 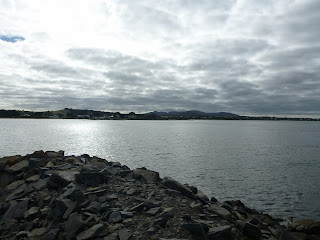 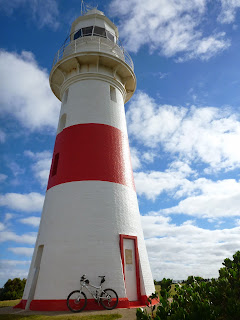 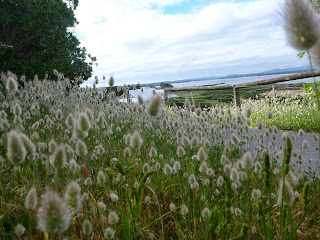 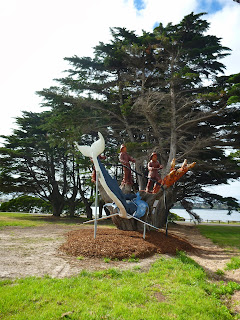 Including a few extra-curricular diversions (ie. getting lost), a bit of sight seeing and a pretty relaxed pace, I finished this 22km return ride in about an hour and a half. If you were here at a decent hour and added in a coffee and museum visit or kids this would probably be a 2+ hour ride.

As much as I hate to say it though, it was the beach ride (only doable on low tide) that I enjoyed the most and I don’t think that this is strictly part of the route, and this is my segue into what is strange about this whole thing.

While this ride could be improved with a bit better ‘comfort’ signage along the way, and by that I’m just talking about small plaques, signs …even spray painted images on the track to let you know you’re on the Kanamaluka Trail rather than just randomly riding through someone’s neighbourhood, at best I’d call this an interesting and pleasant ride, and I’d probably limit my recommendation to ride it to families or those interested in an easy ride and the history of the place (noting that’s probably precisely the audience that the trail is aimed at).

However (and we’re finally getting to the strange bit) in contrast to the Low Head Trail which I’d class as a nice ride, I would be spouting a verbal bucket-load of superlatives encouraging you to go and ride the Birdport walking trail  … if it were legal to do so.

Now, whilst pondering why the Bridport trail isn’t open to cyclists and after the two most obvious reasons are ignored (1. resource constraints to do the necessary environmental checks and 2. nobody had thought of the benefits of doing it because it was built for walkers),  The reasons I come up with for it being closed to pushbikes are phytophthora risk (manageable), snakes, erosion concerns and concerns over the compatibility of walkers and cyclists on the trail, and I think (though I will probably stand corrected) that those last three can all be managed by one thing … controlling the speed of cyclists.

Now seeing some unnecessary braking and skidding damage on some sections of the Bridport trail I do have some sympathy for these concerns, but I personally think it is a great trail for riding at low speed (under 15km/hr and probably less than 10km/hr) and I thought to myself, ‘if only there were some way to legally control the speed of cyclists on the trail“.

That’s where I (finally) came to the ‘strange’ thing, because lo and behold what should I find on the Kanamaluka Trail but these … 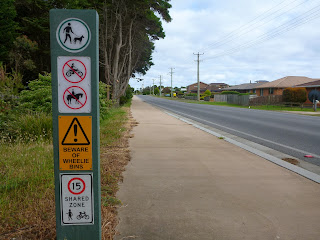 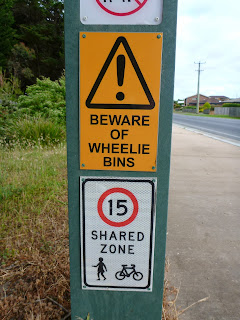 Yep, signage that helps control speed in a multi-use area.

Now I just want to end this post by saying that it is not some subversive way of encouraging people to ride on the bridport walking path where it’s signed “no pushbikes”. I want to be quite clear that I actively discourage illegal riding which is why so many trails don’t make it up onto tassietrails.org.

But I think it is a strange thing that we have what seems to me to be a perfect riding route at Bridport, and yet we’re banned from riding it, and on the other hand we have what I’d rate as a “nice” cycling route in George Town and there we have a council and community (all kudos to them) doing everything they can to promote it.

And to me that’s a strange thing.

Hope you enjoyed your cup of tea and biscuit.