Our group had again decided to split up again today, with Justin and Andreas electing to do a shortened 14km trip starting at the Rocky Cape boat ramp and going to Boat Harbour, whilst Veronica, Mike and I decided to stick to the original plan and set off from Detention River to go right around Rocky Cape to Boat Harbour.  This would make our day about 25kms. 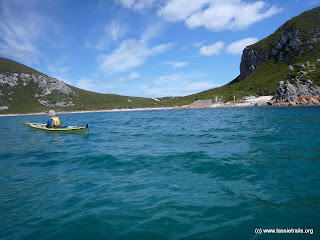 So we made all our plans in the campground before we left about where we’d meet for a coffee, how we’ll work the car shuffles and where we’ll meet at the start… and it all went to pot before we had got 2kms from the campground.

I stopped early at the ATM, Mike and Veronica then drove straight out of Wynyard because the coffee shop we planned to meet at was shut, and then Stephan refused to leave town before Subway opened at 9am so he could have some breakfast … then when he did order breakfast he got in a shouting match with the poor girl there because she charged him $2 more than they charge him for the same sub in Sandy Bay (he tried to swear that they didn’t charge for Avocado in Sandy Bay which I find hard to believe).  Regardless, I just shriveled up in embarrassment, because I doubt that subway staff get paid enough to be shouted at by their first customer of the day.

When we did finally get to the ‘start’ we were pretty late because Stephan had again stopped to chat to some guy at Boat Harbour where we dropped his car off (do you hear my frustration coming through??).

But we did finally get there, only to find Mike and Veronica parked on the side of the highway because there is actually no beach access at Hellyer.  Doh.

Fortunately, they had found an excellent spot to launch right onto Detention River itself just off the highway across from the little cafe / corner store (It’s marked as Myoora Park on the 1:25000 series maps).  You just have to drive a hundred metres of so up a little bush track (towards the coast) and you come out onto a lovely little launching area with picnic facilities and what looks like a few free camp sites hidden around.

Good to know for future reference. 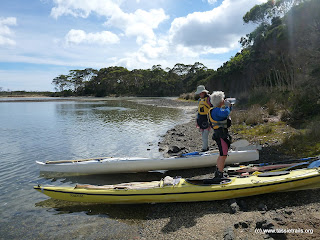 Halfway through getting ourselves ready, Stephan decided it was time for him to go, so he jumped in the car .. and went.  Unfortunately, I was not quite as ready as he had assumed and as it turned out my hat and map were still in the car, so they went with him which, again, I wasn’t so happy about.

But, I wasn’t going to let this get to me, and we soon enough pushed off from shore and started heading out to the mouth of the river. 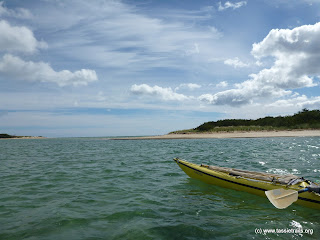 There looked to be a bit of surf to punch through at the river mouth, but luck was with us and there was a deep water passage on the right hand side which we easily snuck through and then, just like that, we were on our way across to Rocky Cape.
Now truth be told, the paddle across is nothing too exciting, but we had a nice south westerly tailwind and so it was at least fun paddling conditions and we each made the best of it in our own way (me and Veronica surfing, Mike sailing). 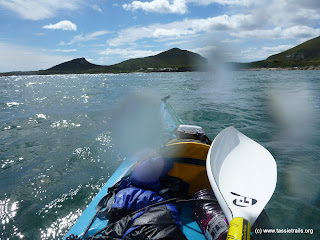 Once we reached the cape, Veronica was able to tell us (well me) the story about every house and occupant in the little shack town, as she had spent two months there as an artist in residence.
Veronica also knew the next section of coastline really well as she had paddled there almost daily whilst living up here.
It was also the absolute highlight of the trip.
The section of coastline was a rock garden paradise of narrow funnels, rocks and sweeping swells that could lift or drop your boat metres in seconds, making some of the rock crossings very interesting indeed. 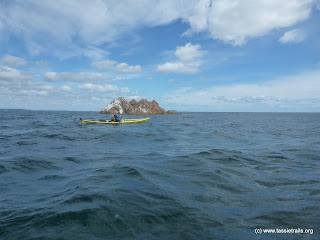 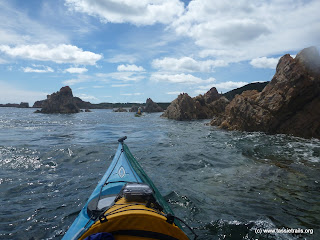 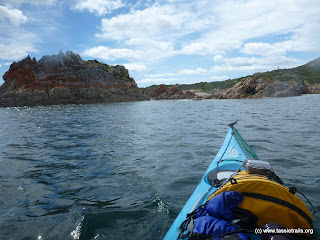 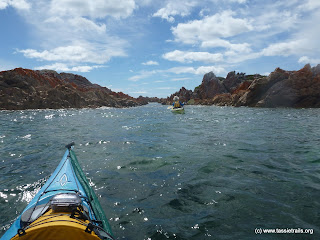 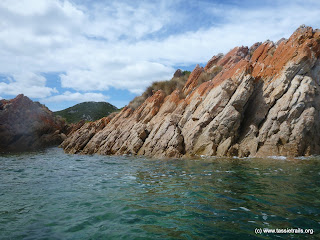 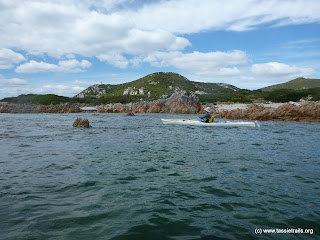 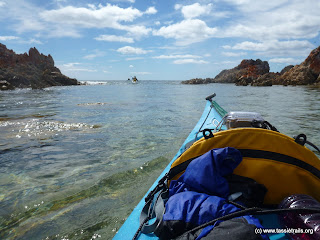 We went through one little channel which was about two metres wide and 50 metres long, and just as I came into it, it was like the whole thing just dried up and I found myself surfing a double headed swell surging into the channel with the tip of the boat hanging out over thin air with nothing but rock below.
It was kind of exciting and could have ended quite badly really, but it didn’t so all is good.
There was also a plethora of beautiful little bays and cliffs to explore in between our little rock dodging games … quite simply, it was a paddler’s paradise. 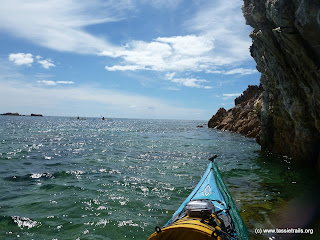 All good things however must come to an end, and we slowly left the cape and made our way back towards Sister’s Beach .. still a very enjoyable paddle … 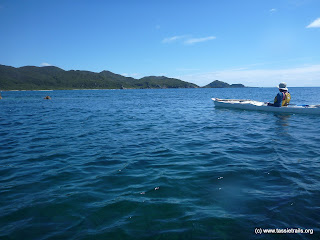 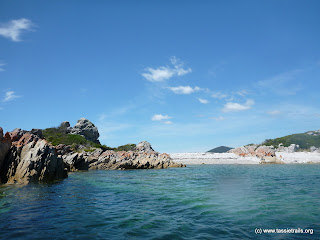 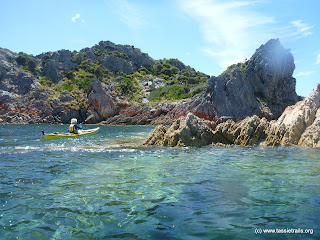 Almost at Sisters Beach, I found what I thought was an awesome little short cut through a channel (I’ve subsequently found out it is called “The Gut” at Anniversary Point) … and for my efforts I ended up wedged in sideways between two cliff faces praying that my brace would hold until the sea went back out and I could jump out of my boat and drag it through the rest of the channel. 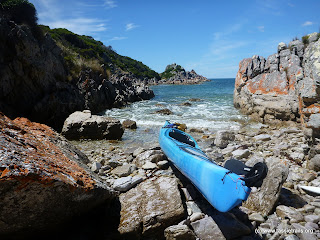 Fortunately my brace did hold  … although Mike and Veronica for some reason decided to back paddle and go around the point, rather than through. 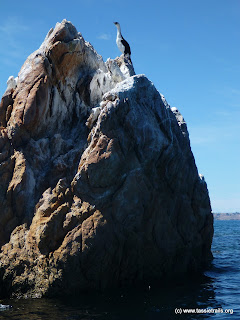 Given the near perfect paddling conditions we opted to skip sisters beach and headed out to Sisters island instead.  A beautiful little island a little ways off shore …

At this point, it was getting on towards 3pm and we were all getting a bit hungry and tired, and so although we did a tiny bit more exploring our thoughts (and stomachs) were all turning towards a late lunch at Boat Harbour, and I think we were all very happy to round the last point and head on into the beach … 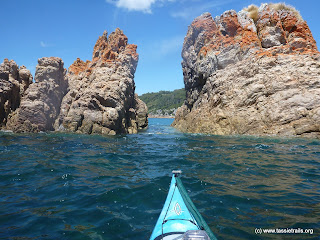 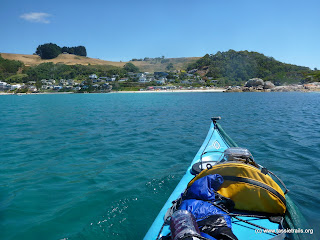 All up we covered about 25kms in around 4 hours, including lots of playing along the way.

It might not be the most exciting trip, I’ve written it, but it certainly is an excellent choice for a paddle on the North West Coast if you’re looking for stunning scenery and seas.