So after two days at Movieworld, today we headed over to see the Dinosaurs at Seaworld. 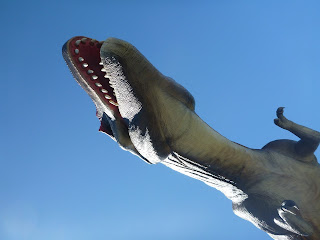 Anyway, after watching the mandatory show where a small pod of dolphins is being chased around by dolphin eating dinosaurs (it must be true or I wouldn’t have this picture:).

we went over to the battleships ride.  Doesn’t that sound like fun?  I thought so.

So the basics here are that there’s a bunch of people (aka Kim, Marcus and Zara) in battleships which have water cannons mounted on them and they float around a predetermined path in a lake shooting at the other boats and people on shore whilst everyone else (aka Me) gets to fire back at them with water cannons mounted around the side of the lake.  Did I mention it sounded like fun?

It may have been three on one, but I am the water fighting king, and I liked those odds.

It was an intense fight right to the bitter end, cannons were fired from all angles until arms ached and the enemy quivered in fear. Yes, monsters can know fear.  I know this now.  They know fear of me and my water cannons.

Yes, I admit that I may have gone slightly overboard as I pulled six year olds off their assigned cannons so that I could take over and reign down water jets of death, but it was worth it …  this was my chance to destroy, to vanquish the monsters … and victory was mine.

After my resounding (and self declared) victory, I sent the three of them up into the rigging to see out there lives entrapped. 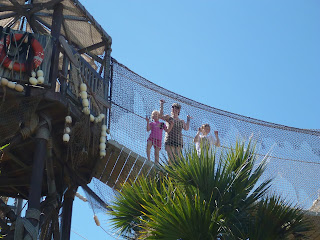 My work here was done … time to go back to Movieworld.