I’d advertised today’s paddle in the club’s trip program as a “Downwind Frolic” for proficient paddlers seeking some wind and wave assisted fun somewhere around Hobart.

Perhaps knowing something I didn’t, I had only one taker for the trip from the club – Mike Edwards – so Saturday morning Mike, Stephan and I were the only one’s who met up at Cremorne to shuffle boats and gear between cars before continuing on down to Fort Beach at South Arm for the start of the one way paddle.

After managing to get us lost on the way down to the start (ending up at the army base instead) I then proceeded to fall out of my boat about 50 metres from our launch site in pathetically small seas probably leading Mike to wonder what he’d signed himself up for … Stephan knowing me better just carried on paddling.

Fortunately those were the only hiccups of the day  … if you ignore the fact (as I studiously am) that I sort of stuffed up the ‘downwind’ and hence the ‘frolic’ purpose of the paddle.

You see, I’d chosen the route based on Thursday’s weather forecast which show a predominantly westerly coming through  on Saturday morning, with the wind swinging around north-westerly later in the day. This made the South Arm to Cremorne paddle route look almost ideal. 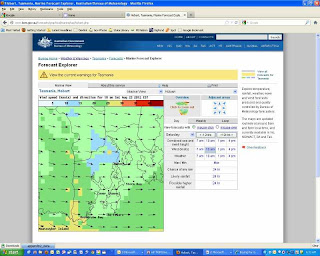 However, by Saturday morning the forecast had changed somewhat with the morning wind dropping off a bit, and the forecast wind shift around to the north west coming earlier in the day.  By the time we’d fully digested this, Stephan and I were already sitting down in Lauderdale Bakery drinking coffee thinking “we probably should be doing a different run today” … as we looked out to the seas on the other side of us clearly showing a strong north westerly influence.

Despite this, I think all three of us were happy just to be on the water paddling along a beautiful bit of coastline, and as per Mike’s prediction we did have a nice set of smaller waves giving us some assistance for the first hour to Betsy Island.

However, after that we started to hit a few pockets of stronger head and side winds, and a lot of lulls in between.  This was definitely no downwind frolic, but for me at least it was still nice to get back on the water after many weeks away and get the feel of the water again.

There are many beautiful cliff and beach sections along this stretch of coast, though Mike in his sea kayak was the only one of us who could really get in close to shore to enjoy it given the swells and hidden rocks just below the surface. 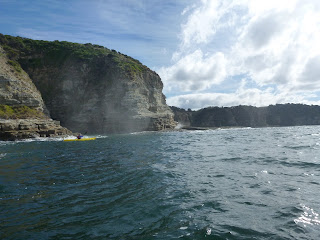 We got back into Cremorne in just under 3 hours on the water (it’s just over 21kms) to discover that the tide had come in and my car, which had previously been parked high and dry on a large beach, was now stranded high and dry on a tiny pocket of sand with about 100 metres of water between it and the nearest road.  Who knew. 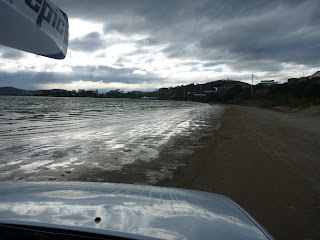 Stephan and Mike found this hilarious, and neither were in any mood for my suggestion that we wait for the tide to go back out … therefore the only solution was to drive straight through it … 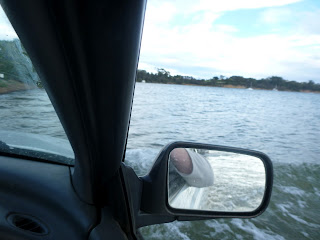 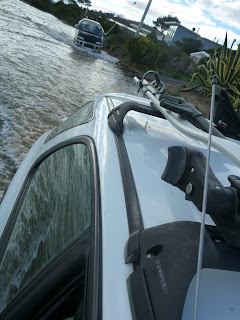 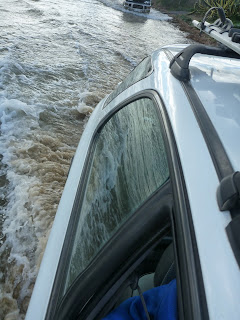 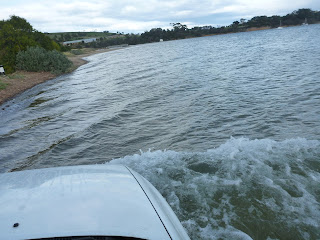 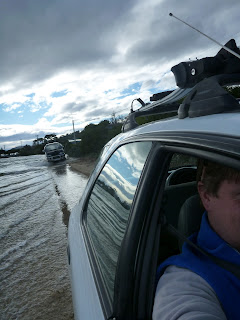 My only consolation was that Stephan and I had to come back through it again (twice) to pick up our boats once we’d dropped Mike back off at the start of the paddle, so his car got a bit salty as well.  Apparently the water came up to the top of my tyres … and I don’t think Subaru’s are built for that.

Despite the hiccups along the way, I have to say it’s good to be back home and on the water again.