I hate being sick, but sick is what I’ve been for the last few days.  Nothing serious, but it was bad enough that I skipped paddling on Thursday night and took Friday off work.

Saturday morning I was meant to go to a Sea Skills session, but I seriously just wanted to stay home and feel sorry for myself (Kim, had at this stage definitively diagnosed “Man Flu”) and in fact I had decided to do just that … right up to about an hour before the start when I decided I could at least go down to Kingston and participate in the theory on the beach.  However, once there, next thing I know I was on the water, and then, yep, I was in it. 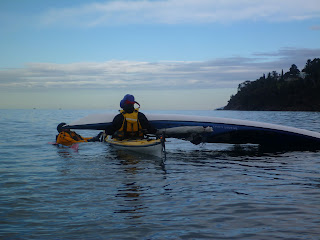 It was a towing and rescue skills day, though due to the snow on the mountain and temperature of the water, there wasn’t that much time spent in the water and I was the only person who turned up in shorts and a thermal top … most others had at least a full wetsuit and thermals and several were in full drysuits.  Maybe this was a clue as to why I’ve been feeling sick lately?

Still, I got off the water having learned that I wasn’t too cold in my gear, even when submerged for 10 minutes, but that my new towing setup was no better than my old one (OK, it was worse) and that all my practice at doing self rescues the “Gordon Brown” way were totally useless when my boat was full of water, so it was back to the drawing board on that one.

That afternoon, I went to a second session, this time in the Hobart Aquatic Centre. 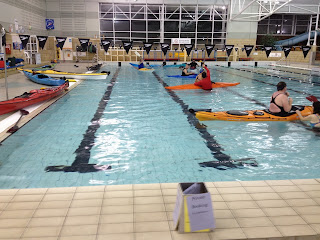 The club pool sessions are there to practice what you want to practice, and I wanted to practice my rolls (kind of had to seeing my Gordon Brown rescues were a flop on the open water).

When I turned up to my first pool session a month or so ago I had at best an intermittent roll, but now (although it still needs a lot of work) I can rely on my right hand roll getting me up and out of the water to the extent that I could have a few goes at my left hand side roll and when that didn’t work, I just rolled up on my right side and sat there wondering what was wrong with my left hand side roll.

However, I managed to ping my first left hand side roll today and then Isa showed me how to do a re-enter and roll and I pinged two of those.

I still felt sick at the end of the day, and ended up skipping a planned 3 hour MTB Enduro on Sunday, but sick is sick and with The IceBreaker coming up next weekend and only two and a bit weeks until I’m out of here for a month, I figured it’s better to get over whatever I’ve got than push myself too hard.   Plus it was nice just having a lazy day with Kim.